The power sector, especially the distribution segment, is one of the key focus areas of the current government. Several steps have been taken to revive the distribution segment, which has been dealing with issues like ageing infrastructure, high operational losses and financial fragility. Prior to the launch of the Ujwal Discom Assurance Yojana in November 2015, two key schemes that were key in this regard were the Integrated Power Development Scheme (IPDS) and the Deendayal Upadhyaya Gram Jyoti Yojana (DDUGJY).

The IPDS and DDUGJY were approved by the cabinet in November 2014 and December 2014 respectively, with the aim of augmenting the urban and rural sub-transmission and distribution networks and increasing the quality and reliability of power supply. An update on the status of both these schemes…

The Power Finance Corporation (PFC) is the nodal agency for implementing the scheme, which is also being monitored by a project management agency under the Ministry of Power.

The scheme’s total outlay is around Rs 326 billion, including a gross budgetary support of Rs 253 billion from the central government. The total amount includes Rs 253 billion for the development of sub-transmission and distribution infrastructure, Rs 30 billion for the renovation and modernisation of substations and lines, Rs 17 billion for metering at the consumer end, DTs and feeders, and Rs 3.5 billion for implementing enterprise resource planning. The Restructured Accelerated Power Development and Reforms Programme (R-APDRP) has been merged with the IPDS for the Twelfth and Thirteenth Plan periods. The outlay of Rs 440 billion, including budgetary support of Rs 227.27 billion, for the R-APDRP has been carried forward to the IPDS.

As of April 2016, the monitoring committee has sanctioned detailed project reports (DPRs) worth Rs 248.38 billion for 3,486 towns. For the remaining towns, DPRs are being appraised by PFC while some have already been appraised. Standard guidelines, technical specifications and bid documents have been issued and the centralised procurement of high-value items is in progress.

Meanwhile, under Part A of the R-APDRP, 1,222 out of 1,405 towns have gone live. Part B aims to strengthen and upgrade the distribution network across 1,221 towns. Under Part B, works had been awarded for 1,217 towns, of which work is in progress in 723 towns and has been completed in 425 towns, as of March 2016. Further, the number of towns targeted for completion of works in 2016-17 has been increased from 358 to 500. For analysing post-go-live reports for Part A towns, an online system is being developed, which will eventually be migrated to the national power portal. In addition, under the IPDS, a first-of-its-kind impact assessment study of IT enablement has been undertaken in 14 states.

The new initiatives under this scheme include a study on the segregation of commercial losses from overall AT&C losses in 10 pilot towns in Andhra Pradesh, Haryana, Himachal Pradesh, Gujarat, Maharashtra, Madhya Pradesh, Telangana, Uttarakhand, Uttar Pradesh and West Bengal. Meanwhile, inputs are awaited from Haryana, Himachal Pradesh, Maharashtra, Uttar Pradesh and West Bengal. A study of 10 discoms that have witnessed a decline in AT&C losses in the past five years is also being undertaken. A new mobile application for the distribution segment, called URJA, is being developed as well. For this application, states will be required to provide daily feeder-wise system average interruption frequency index data/ system average interruption duration index data, publish daily outage schedule and provide daily town-wise feeder meter reading information and operationalise the “1912” short code for electricity complaints. 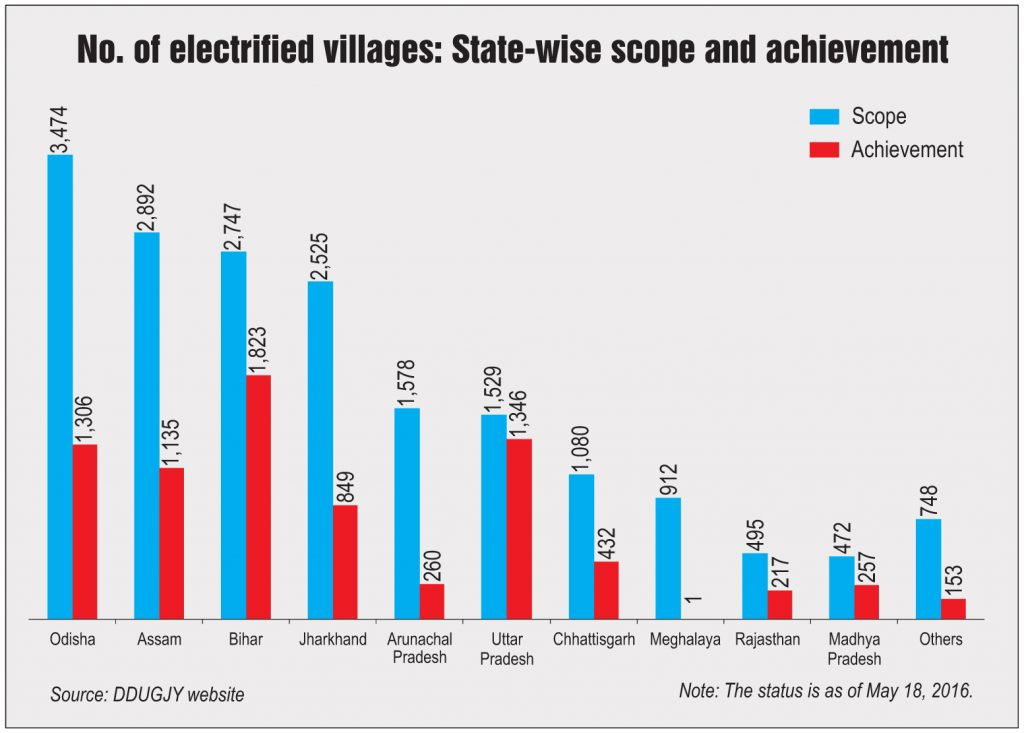 This scheme primarily aims to ensure regulated power supply to agricultural consumers and continuous power supply to non-agricultural consumers in rural areas through feeder separation for these two consumer categories. The three components of the scheme are the separation of agricultural and non-agricultural feeders, the strengthening and augmentation of the sub-transmission and distribution system in rural areas, and rural electrification. The third component, rural electrification, subsumes the previously launched the Rajiv Gandhi Grameen Vidyutikaran Yojana (RGGVY).

As of April 2016, about 606 projects worth Rs 412 billion across 29 states and union territories were sanctioned under the DDUGJY. Presently more than 30 per cent of the total rural households are without electricity. Meanwhile, nine states – Andhra Pradesh, Goa, Gujarat, Haryana, Kerala, Maharashtra, Punjab, Sikkim and Tamil Nadu – have achieved 100 per cent village electrification. Of these, only Goa, Gujarat and Punjab have achieved electrification in all rural households.

Several other initiatives are being taken to expedite rural electrification. A new mobile application, called Grameen Vidyutikaran (GARV), has been developed to provide information regarding the status of village electrification work. The entire process has been divided into 12 major milestones, which can be effectively monitored through GARV. Additional features pertaining to feedback and suggestions, state-wise snapshots, village adoptability, GVA visits and delayed target achievement have been added to it.

Meanwhile, some initiatives are on a trial run, such as those pertaining to night out village images; GVA tracking through the Indian Space Research Organisation; and electricity infrastructure mapping through Digital India in association with the Bhaskaracharya Institute for Space Applications and Geo-Informatics, Ahmedabad. 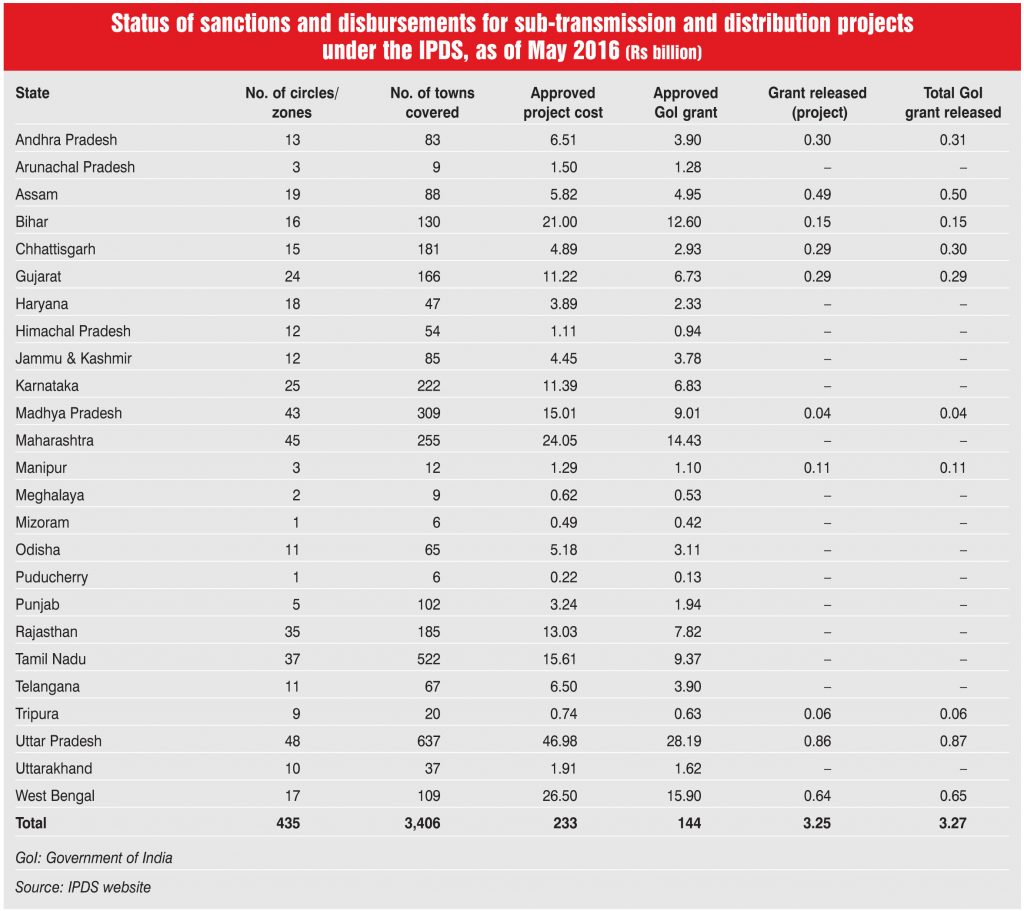 A robust distribution segment is necessary for ensuring the viability of the power sector. The IPDS and DDUGJY have laid out comprehensive plans to resolve the issues beleaguering the segment. The timely achievement of the targets set by these schemes will help realise the government’s objective of Power for All by 2022.