While coal shortage has been a major cause of concern for the power sector until recently, there is now a bigger resource constraint facing the sector – water. The acute shortage of water is becoming a huge threat that is likely to impede plant operations. Hydropower plants are already impacted, registering a 6 per cent drop in generation last fiscal as compared to the previous year. Over 8,000 MW of coal-based capacity had to reportedly be shut down several times during the past two years due to acute water scarcity, as per power ministry data. This includes projects of state-run majors such as NTPC Limited and Mahagenco, as well as private heavyweights such as Reliance Power, Essar Power and GMR Energy (see table).

In the past few years, poor monsoons have led to a water crisis in many parts of the country. As a result, the water-intensive power sector has been struggling with dwindling supplies. Apart from the existing projects, the water crunch poses significant risks for upcoming coal-based capacity. According to a recent Greenpeace International report, around 40 per cent of the proposed 52 GW of power plants in India are located in water stressed areas.

Is the industry ready to adopt the new norms? How can the water crisis affecting the power plants be resolved? A closer look at these issues as well as the current state of water use in the power industry…

There are different factors that affect the use of water in a plant. These include the quality of raw water, type of condenser cooling system, quality of coal, ash utilisation, type of ash disposal system and waste water management aspects.  According to industry estimates, India’s thermal power plants (TPPs) are expected to draw around 22 billion cubic metres of water, which is over half of India’s domestic water need.

Water has several end-uses in a power plant. Since it has the highest specific heat amongst all materials available in abundance, water is ideal as a cooling fluid for various processes. Cooling tower water is used in cooling towers; make-up water is used to compensate for the loss of water due to evaporation in the cooling tower; demineralised water (DM water) is used in boilers for generating steam; ash handling water is used for handling the ash generated during the combustion process through slurry; service water is used for processes like coal dust suppression, fire fighting measures, plantation and greening activities; and potable water is used for drinking water purposes at the plant and its vicinity.

Maharashtra State Power Generation Company Limited’s 1,130 MW Parli thermal power station in Beed district has been completely shut since June 2015 due to the severe water shortage in the region. The plant used to receive water from the Khadka dam, but supply was stopped as the water in the dam has almost dried up.

In May 2016, private major Adani Power, which operates the Tiroda TPP in Maharashtra, shut down four of its five units aggregating 2,640 MW. Two units of the GMR Group’s Warora plant, totalling 600 MW, in Chandrapur district of Maharashtra have been shut since April 2016. 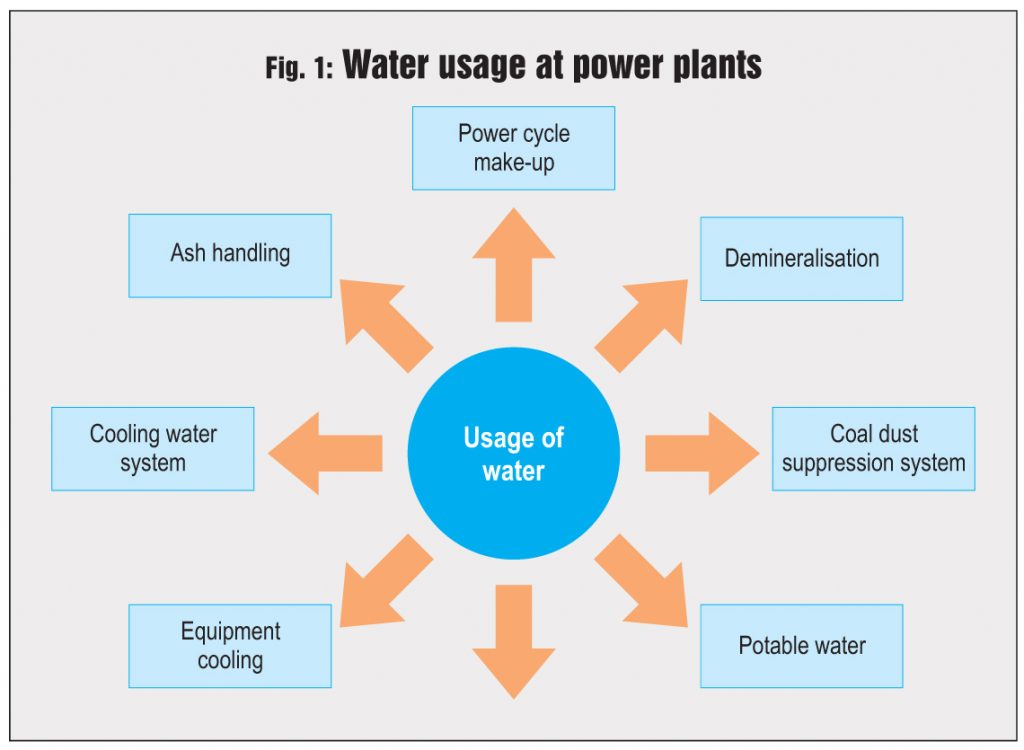 The situation is no different in other parts of the country. Many other generating stations had to temporarily shut down operations in the past two years (see table). Prominent among these is NTPC Limited’s 2,100 MW Farakka thermal power station in West Bengal. Five of the six units, aggregating 1,600 MW, had to be shut down in April this year due to low water supply from the feeder canal.

As per the latest regulations, four key amendments have been made for reducing the water requirements for cooling systems, which consume the maximum water (see Figure 2).

First, all TPPs with once-through cooling (OTC) have to install cooling towers and achieve a water consumption of 4 cubic metres per MWh. An OTC is a system where the plant draws water from the source, uses it to cool steam and then discharges the heated water back into the source. Most of the older thermal plants in India use once-through wet cooling systems.

On the other hand, cooling tower-based systems draw water from the source, use it to cool steam and the heated water is then put through in a cooling tower to be cooled and used again in the plant. This system is also called a re-circulating cooling system. While OTC draws a huge amount of water from the source and consumes less water, re-circulating systems draw relatively less water but consume much more. In June 1999, the Ministry of Environment and Forests had banned the construction of TPPs with OTC systems. 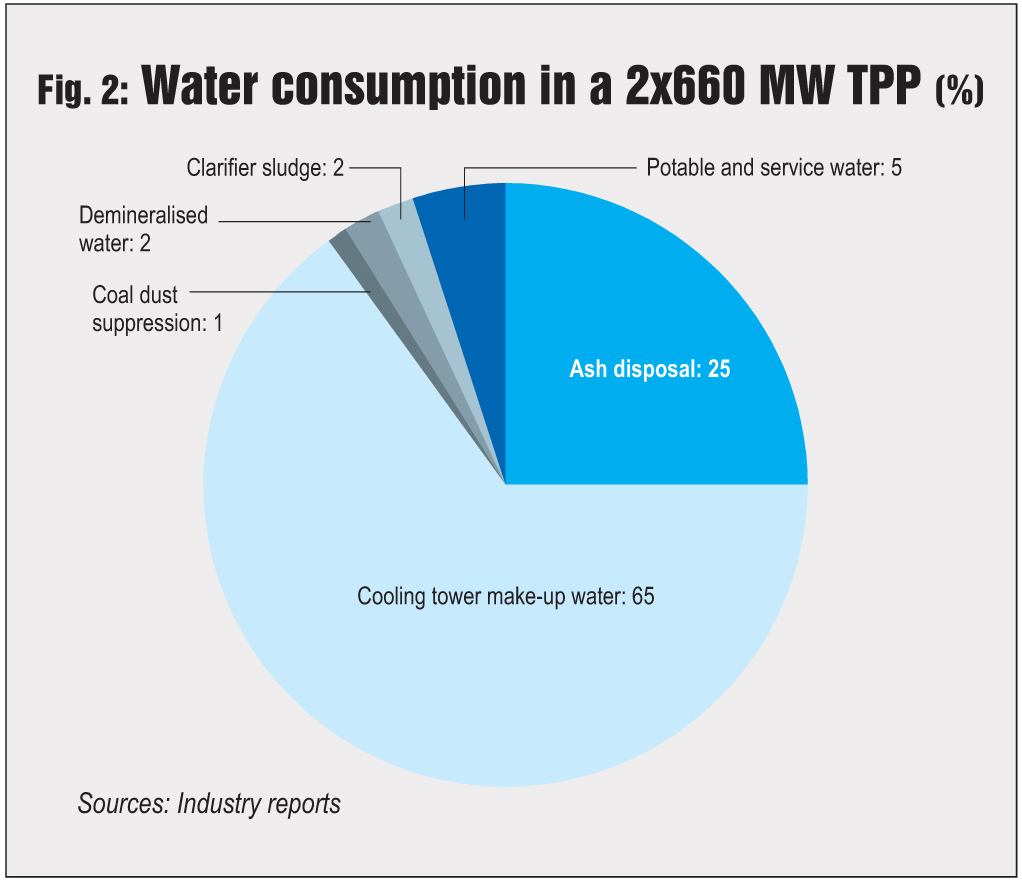 Last, new plants to be set up after January 1, 2017 will also be required to achieve zero wastewater discharge. A zero liquid discharge system involves a range of advanced wastewater treatment technologies to recycle, recover and re-use the treated wastewater. This ensures that there is no discharge of wastewater into the environment.

Industry response to the new regulations

The new regulations have evoked strong reactions from the industry. Besides citing the limited time period (two years) given to comply with the new regulations, industry stakeholders contend that the cost implications are huge.

According to industry estimates, the total cost of upgrading all TPPs to comply with the new norms would be Rs 2,500 billion or Rs 12.5 million-Rs 15 million per MW. As a result, there would be a tariff increase of Re 0.50-Rs 1.25 per unit. (These estimates, however, take into account the cost of complying with not just the new water norms but also the new air emission norms.)

NTPC Limited has stated that it would need to invest close to Rs 200 billion to comply with the new regulations, or at least Rs 5 million per MW. Another concern is that retrofitting cooling systems is not an economical option for older plants with OTC systems, as these plants are reaching the end of their designed lifespan.

The Association of Power Producers (APP) has asked the government to relax the new emission norms for old plants. It has stated that technical modifications would need to be made for plants aggregating 62 GW of capacity commissioned before 2003 and having less than 10 years of residual life. The APP has further mentioned that the norms will make the entire exercise financially unviable and it would be difficult to recover the cost of retrofitting during the plant’s remaining life.

Achieving the zero liquid discharge requirement is also expected to be a challenge owing to the high costs (opex and capex) of wastewater treatment systems. Most TPPs in India have easy access to freshwater resources such as nearby rivers, lakes and borewells. Therefore, they are often not in favour of setting up wastewater recycling plants or tertiary treatment facilities, which adds to their financial burden.

Industry players have proposed that older plants should be exempted from the new norms and could be run for a less number of hours to minimise the carbon footprint. To this end, it has been proposed that these norms are made applicable to only plants set up after 2003. Further, the APP has suggested a realistic timeline of five to ten years (instead of two years) for the transition.  As the largest consumers of industrial water, TPPs have a major onus to bring down their water consumption. Industry experts recommend the adoption of various strategies for enhancing water use efficiency. These include ensuring regular water audits to monitor water and wastewater consumption, replacement of old pipes to reduce water wastage, recycling drain wastewater, shift to dry ash handling from wet ash handling through slurry, and rationalisation of per capita water consumption in townships.

Net, net, although the impact of plant shutdowns due to water shortages is limited given the idle generation capacity currently available, such sporadic shutdowns pose a major threat to grid reliability. As the industry and the government debate a viable solution to overcome the crisis, it is hoped that the good monsoon forecast for this year will bring some respite.