The Ujwal Discom Assurance Yojana (UDAY), launched by the central government in November 2015, is perceived as the most comprehensive reform initiative ever taken to improve the operational and financial efficiency of the discoms. The scheme aims to bring down aggregate technical and commercial (AT&C) losses to 15 per cent, eliminating the gap between the cost of supply and revenue realised, and to make the distribution utilities profitable by 2018-19.

Since the announcement of the scheme, 21 states have agreed in-principle to participate in it.

Of these, 13 states – Rajasthan, Uttar Pradesh, Chhattisgarh, Jharkhand, Punjab, Bihar, Haryana, Gujarat, Uttarakhand, Karnataka, Goa and Jammu & Kashmir, and Andhra Pradesh – have already signed MoUs with the government, the latest being Andhra Pradesh, which came on board on June 24, 2016. These 13 states account for a combined debt of about Rs 2.16 trillion, which is approximately half the total debt of discoms at Rs 4.3 trillion, as on September 30, 2015.

As per the scheme, the state governments are required to take over 75 per cent of their respective discoms’ debt (50 per cent of the debt in the first year and 25 per cent in the second year). States can then issue bonds in the market or directly to the banks or financial institutions holding the discom debt. Although there may not be an immediate impact on the states’ finances, they may come under stress in the coming years on account of the burgeoning liabilities due to the takeover of the debt of discoms.

Bonds worth more than Rs 1,500 billion have been issued by various states till date. In 2015-16, bonds worth Rs 989.59 billion were issued by eight states – Rajasthan, Uttar Pradesh, Chhattisgarh, Jharkhand, Punjab, Bihar, Haryana and Jammu & Kashmir. In 2016-17, bonds worth Rs 483.91 billion have been floated by Rajasthan, Uttar Pradesh and Punjab. According to industry estimates, bonds aggregating  Rs 1,250 billion will be issued by March 2017.

The bonds bear interest rates of around 8.5 per cent, close to the corresponding yield of 10-year central government bonds. The bonds issued by state governments such as those of Jharkhand, Chhattisgarh, Punjab and Haryana yield 30-40 basis points more than the states’ own securities. However, the Rajasthan government issued UDAY bonds at an interest rate of 8.39 per cent, which is lower than the 8.55 per cent rate at which it recently raised a 10-year loan. Uttar Pradesh has issued Rs 158 billion worth of bonds at an average yield of 8.32 per cent. 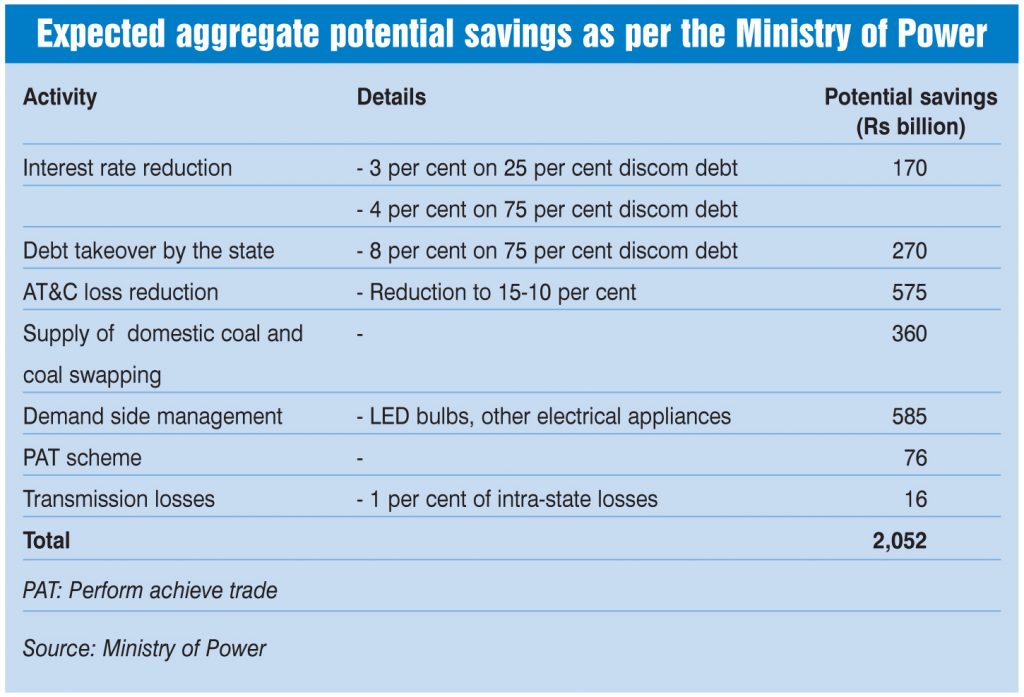 As against the average rate of 8.5 per cent of UDAY bonds, the interest rates at which lenders had extended loans to discoms were in the range of 12 per cent to 14 per cent. This means that banks will have to take a hit of about 3 per cent to 4 per cent as these bonds have a far lower yield than the interest on loans given to discoms. Despite this, the bonds have received a warm response from investors. The UDAY bonds offer lower interest rates than those of loans given to the discoms, but also carry a lower risk. At the same time, UDAY bond rates are still higher than the rates offered on other government securities with a similar credit risk.

Various banks (both private and public sector) have shown keen interest in buying the UDAY bonds being offered by the state governments. Of the total bonds issued by the states, close to 75 per cent have been bought by banks. These bonds are also being seen as an attractive long-term investment opportunity by mutual funds and the Employees’ Provident Fund Organisation. 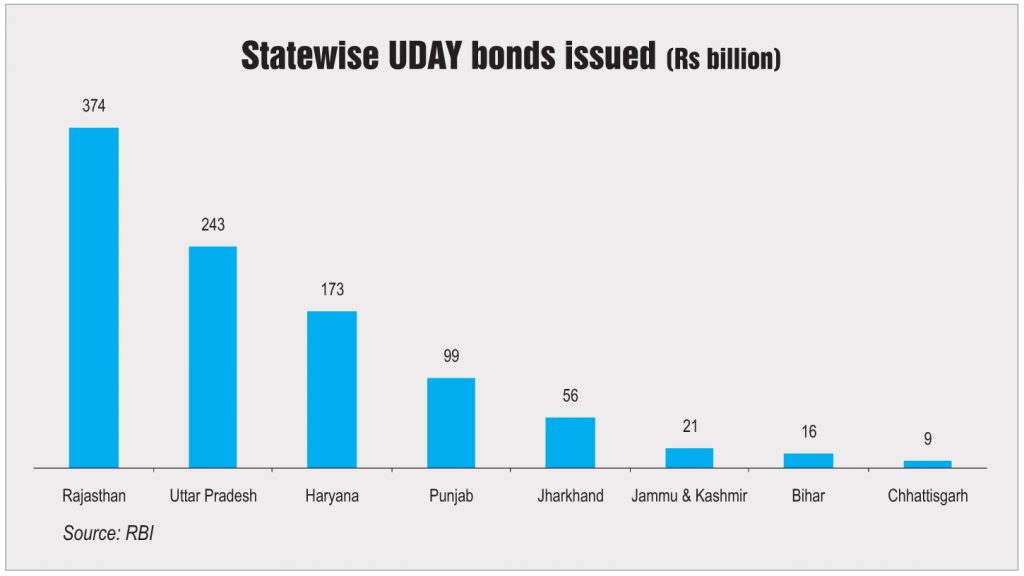 The central government has accorded an extension of the timeline for the states to participate in the scheme and for the state governments to take over the outstanding debt of the discoms. On June 22, 2016, the central government announced the extension of the timeline by one year, from the earlier stipulated date of  March 31, 2016. Following the announcement, Andhra Pradesh signed the MoU on June 24.

Further, with a view to increase the ambit of the scheme, the government is considering incorporating private power distribution companies in it. However, private discoms may not be offered any financial bailout, but would stand to benefit in terms of operational efficiency. Meanwhile, Odisha, which has already agreed to join the scheme, has called for the implementation of the scheme through its bulk power purchaser, GRIDCO. Since GRIDCO is not a distribution company per se, even though it is currently managing the discoms of Odisha previously owned by Reliance Infra, it is not eligible to implement UDAY. This is still under consideration with the central government.

Tamil Nadu, a key absentee from the scheme, has demanded special concessions to join it. At Rs 680 billion, the outstanding debt of the state discom is among the highest across the states. The conditions that the state has set for joining the scheme include a write-off of 50 per cent of the total outstanding debt and special grants from the centre to cover 30 per cent of it. However, the central government has stated that it is not in a position to offer these special concessions, even though the scheme can help the state achieve savings of Rs 224 billion over the next three years.

Although optional, the scheme has attracted many states and received a fairly good response from investors as well. Further, the inclusion of the private sector, if it takes place, will indeed make the scheme the most comprehensive initiative to reform the power distribution segment till date. However, the real outcomes are yet to come in. Also, with timelines already getting extended, sector observers are concerned that the scheme could witness a delay in the achievement of the desired objectives.