There is little doubt that the power sector has come a long way in the past two decades. The power market has transitioned from a single-buyer model to a multi-buyer, multi-seller model. There is more competition and transparency. And greater certainty in policy-level interventions today.

In generation, record capacities are being added each year, with a significant contribution from the private sector. Projects no longer face fuel constraints. Renewables have grown at a blistering pace.

The transmission system is more robust now. The national grid project has been implemented. Private investments have picked up significantly. There is tighter grid discipline and security.

In addition, tariff petitions and revisions have become more regular, aggregate technical and commercial (AT&C) losses have come down, overdrawals by utilities have sharply reduced, automation has made a big difference to utility operations, and rural electrification levels have improved significantly.

Yet, two persistent problems over the past two decades have undermined the sector’s true potential. One, discoms continue to be in a bad shape and are unable to procure the power on offer. Two, tariffs are still not viable.

Power Line rewinds the past 20 years to see where the sector started and where it is now, to highlight the big successes and major setbacks…

In the 1990s, a slew of incentives were offered to private investors, which elicited an overwhelming response from investors, both domestic and international. However, the euphoria soon subsided, with no real action being taken on the ground. Till the mid-1990s and early 2000s, the contribution of independent power producers (IPPs) to generation as well as the installed base was a dismal 5 per cent. The near-bankrupt state electricity boards (SEBs) failed to pay their dues, giving a tough time to IPPs. As a result, many projects found it difficult to stay afloat while some closed down temporarily (Dabhol being a classic case).

In this scenario, the Electricity Act, 2003 acted as a catalyst for change. In one stroke, it removed the biggest stumbling block in the path of IPPs, obligatory power sales to SEBs, leading to an IPP revival. Since then, the private sector has added around 75,000 MW. The private sector’s current share in the installed capacity is now the highest at over 41 per cent.

In 1996-97, the overall plant load factor (PLF) of thermal power plants (TPPs) stood at 64 per cent. Over the next decade or so, PLFs improved significantly, rising to nearly 77 per cent by 2008-09 on the back of better technology use and improved plant management practices. In fact, the private sector recorded its best PLF performance in 2008-09 with a record high of 91 per cent. The fuel crunch, however, put a full stop to this stellar performance. The widening gap between coal demand and supply, coupled with the gas supply shortage, crippled many TPPs. By 2013-14, PLFs had dropped to almost 66 per cent. The cash-strapped discoms stopped buying power, adding to developers’ woes. Over the next two years, PLFs plummeted further to touch all-time lows of 64 per cent and 62 per cent. 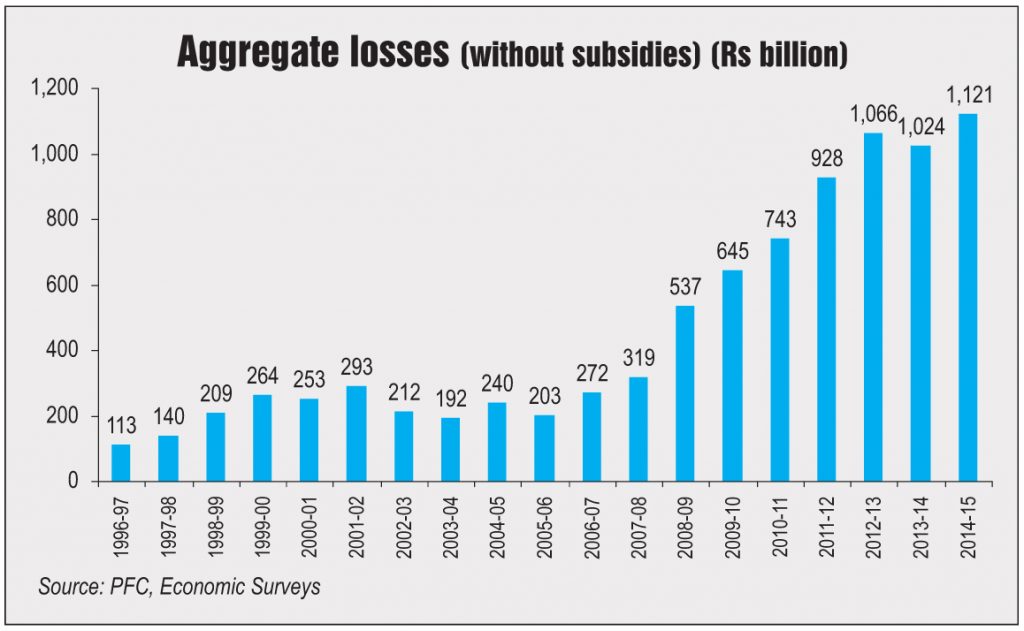 While coal continues to account for the largest share in the country’s installed capacity at 61 per cent (similar to its 63 per cent share in 1996-97), the fuel mix has undergone a significant change over the past two decades with renewables getting greater play. Against a share of just about 1 per cent at the time, it now accounts for a significant 13 per cent. Meanwhile, the share of hydro has eroded gradually. From 25 per cent in 1996-97, its share has come down to only 14 per cent. The share of gas-based power has remained the same at around 8 per cent over the past two decades, while that of nuclear has reduced marginally, from 2.5 per cent to 1.8 per cent.

Discom losses: End to the stalemate?

The poor financial health of discoms is still the most crucial issue in the power sector. The SEBs’ aggregate losses have increased tenfold since 1996-97, from Rs 113 billion to Rs 1.12 trillion in 2014-15. Successive governments have tried to fix the problem through three bailout packages. The first, introduced in 2002, was a one-time settlement scheme for SEB dues. The second, a financial restructuring package, was launched in 2012. And the third, most recent one, the Ujwal Discom Assurance Yojana (UDAY),  was announced last year amid much hope. However, the root cause for the increasing losses – non-reflective tariffs and increased expenses – remains unaddressed. The average tariffs charged to consumers increased from Rs 1.20 per unit in 1996-97 to Rs 4.10 per unit in 2014-15, while the cost of supply increased from Rs 1.60 per unit to Rs 5.20 per unit during this period. The gap between the average cost of supply and the average tariff, which stood at 38 paise per unit in 1996-97, is now Rs 1.08 per unit. This time around though, UDAY holds hope for discom revival through not just debt restructuring but also operational improvements. 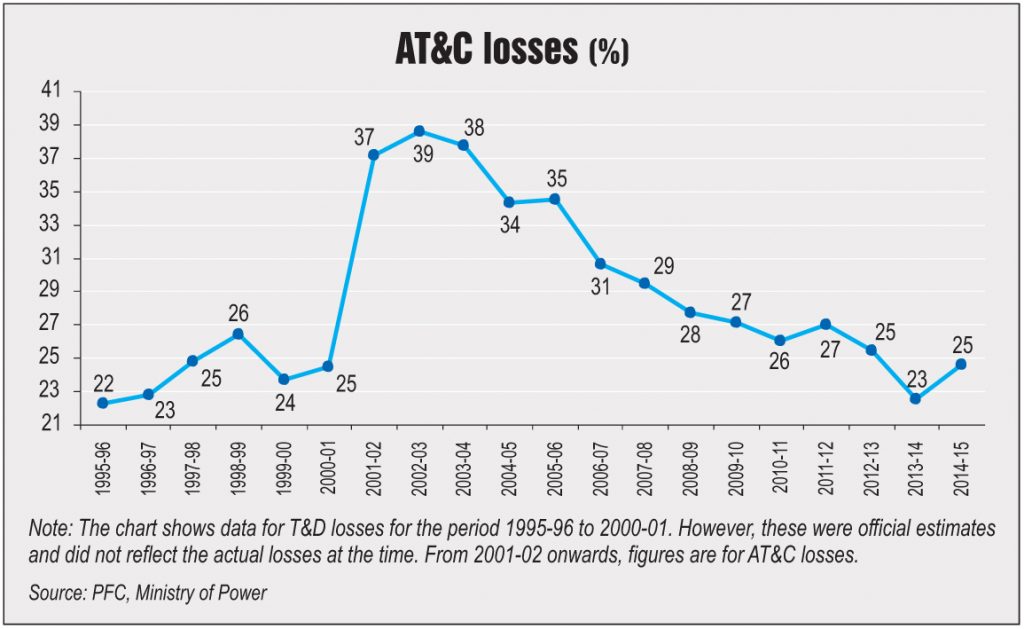 Till the 1990s, the officially declared estimates showed that the transmission and distribution (T&D) losses ranged from 22 per cent to 26 per cent. Actual estimates were undoubtedly much higher, at close to 40-50 per cent. In 2001-02, the concept of AT&C losses was introduced to precisely measure the gap between billing and collection. The losses were estimated at around 37 per cent. A mega reform move, the Accelerated Power Development and Reforms Programme, was launched in 2003 with the promise of bringing down losses to 15 per cent by 2007. However, the segment failed to come out of the red with AT&C losses still at a significant 31 per cent at the end of the programme. The APDRP was re-launched in 2008 as the Restructured Accelerated Power Development and Reforms Programme (R-APDRP) with revised terms and conditions. It did bring in some positive results, with AT&C losses reducing to 24.6 per cent in 2014-15. The R-APDRP is now a part of the newly launched Integrated Power Development Scheme (IPDS), which is much bigger in scope and coverage than its predecessor. Also, instead of aiming for a uniform reduction, a discom-wise loss reduction trajectory has now been adopted for bringing down AT&C losses by 2021-22.

Till as late as 2013-14, India’s coal story was nothing to write home about. However, a host of reforms in the past two years have turned around the sector in a major way. Against a near-stagnant production level for many years, Coal India Limited clocked impressive growth of around 7 per cent and 8.5 per cent in 2014-15 and 2015-16 respectively. At present, there is no power plant that has a shortage of coal and, for the first time, last year imports registered a decline.

Transmission: From monopoly to competition

In 1998, transmission was officially recognised as a separate activity and private investment was invited in transmission with the passage of the Transmission Bill. But, for a long time not much came of it. The first and only private project back then was the Tala transmission project, executed by Powerlinks Transmission, a joint venture between Power Grid Corporation of India Limited (Powergrid) and Tata Power. Competitive bidding guidelines for transmission projects were introduced in 2006; however, the first set of independent transmission projects were not awarded till as late as 2010. The situation is vastly different today. More than two dozen projects have now been awarded to private sector players. There is a level playing field for private players and competition is intense with private majors closely competing with state major Powergrid to win these projects. 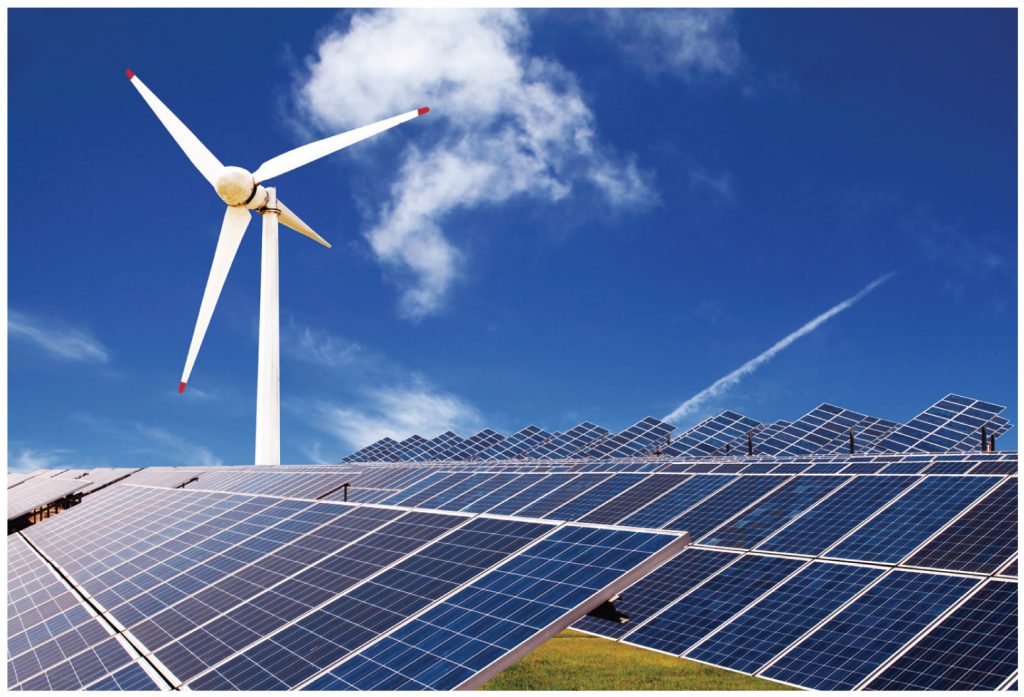 Privatisation of distribution: Yet to see serious efforts

Like earlier, the distribution segment remains largely in the hands of the state sector. After the Odisha and Delhi distribution reforms, no state has adopted the outright privatisation model. Political considerations and the financially insolvent state of the SEBs have been the key impediments in the privatisation process. The softer, distribution franchise route has, however, been adopted by a few states following the success of the Bhiwandi franchise in Maharashtra, which was awarded in 2007. A number of players such as Torrent Power, CESC Limited, India Power and Essel have been awarded distribution franchises. The next few years could completely alter the scenario with the passage of the Electricity Act Amendment Bill. The biggest reform under these amendments is the introduction of competition in the distribution segment, which will open up retail supply to multiple players.

Since 1996-97, one of the primary missions of Powergrid has been to create a national electricity grid to increase the transfer of power between the country’s five regional power grids. The year 2014 marked the accomplishment of this mission. The southern grid was connected with the central grid in December, thus creating a “One Nation, One Grid, One Price” system for the first time. Industry observers note that there are several days wherein a single price of power has been observed across India. While the current interregional power transfer capacity stands at around 59,650 MW, Powergrid is now working on a number of other transmission projects including HVDC links to further augment the transfer capacity to 72,000 MW by the end of 2016-17.

About two decades ago, people widely acknowledged the potential of renewable energy, but large-scale deployment still had to be demonstrated. The installed renewable capacity back then was not even 1,000 MW. Even as late as in 2004-05, the installed renewable base barely touched 4,000 MW. Renewable tariffs were astronomical, equipment costs were high and there were no real incentives to invest in the sector. Now, 10 years on, the sector has surpassed all expectations. Grid-connected installed capacity has crossed 40 GW. Not only have declining costs with maturing technologies helped improve the viability of projects, a number of proactive policy measures have also contributed significantly to the growth. While the accelerated depreciation and generation-based incentives have been key drivers for the growth of the wind power market, the National Solar Mission and state-specific policies have been driving the growth of solar in recent years. With the government’s aggressive target to quadruple the renewable capacity to 175 GW by 2022, the segment is expected to witness exponential growth over the next few years. 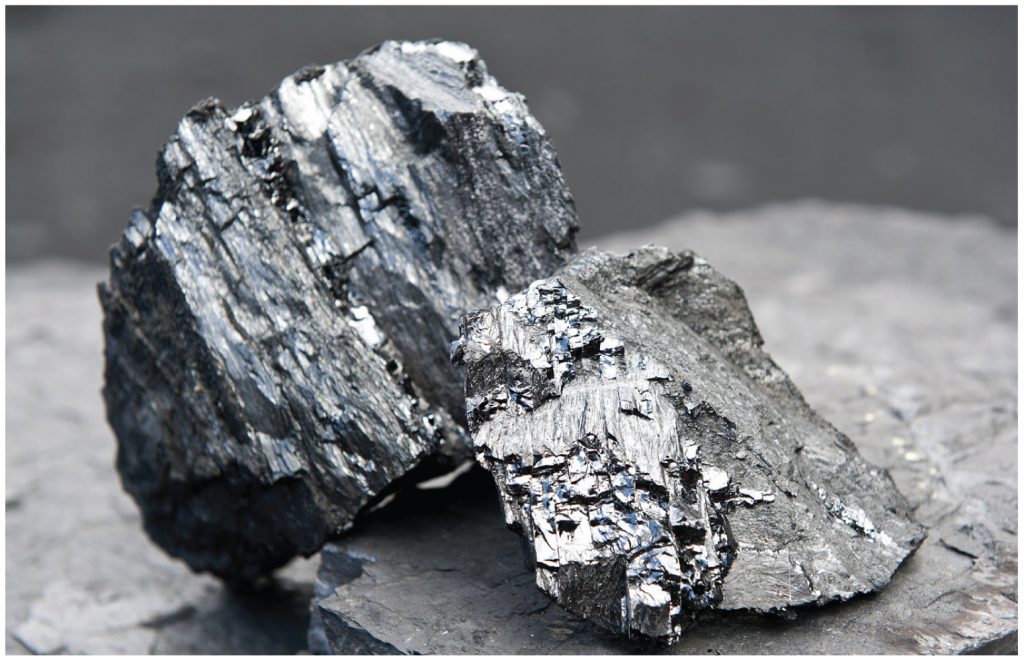 Till the 1990s, there was no formal system for financial incentives to promote grid discipline. The introduction of the availability-based tariff regime in 2000 by the Central Electricity Regulatory Commission (CERC) was the first significant measure to address this issue. The grid discipline mechanism was strengthened further in 2009 and 2010 with the introduction of the Indian Electricity Grid Code Regulations and the unscheduled interchange (UI) mechanism. However, grid stability came into sharp focus in 2012, with the infamous collapse of the northern grid, which revealed that utilities were using the mechanism as a route for electricity trading and exploiting shortages. Since then, there has been a significant review of protection systems, regulations, transmission planning and islanding schemes. Transmission grid frequency is now almost always maintained at 50 Hz. Ancillary services have also kicked in this year and are further expected to ensure that demand and supply are balanced at all times.

Prior to 2001, power exchanges between the states and vertically integrated utilities were characterised by small, intermittent volumes. With the creation of PTC Limited, short-term power trading as a business concept was introduced. At the time, trading volumes stood at 1,500 MUs with a share of only 2 per cent in total generation. The real game changer was the 2003 reforms. The first trading licence was granted to PTC and the next few years saw competition in the segment heating up with a number of new players securing trading licences. Trading volumes grew to almost 21 BUs by 2007-08. Another turning point for the sector came with the launch of the two power exchanges in 2008. Today, trading volumes are close to 70 BUs with the trading market share in the total power generated at a significant 9 per cent. Another positive trend has been the growing participation of open access consumers to tap power through this route.

Much progress has been made through a number of progressive measures taken over the past two decades. Initiatives such as UDAY, the IPDS and DDUGJY, aggressive renewable energy targets, the new hydro policy and the massive transmission connectivity plans, along with the proposed amendments to the Electricity Act, could redefine the shape of the sector. These reforms are ambitious. If executed properly, they could have a significant impact on the sector in the next few years.