The sugar industry in India is one of the largest consumers of energy in the industrial sector, using bagasse for meeting both thermal energy and electricity requirements. As per the Energy Conservation Act, 2001, sugar mills are energy-intensive industries. In the current year, a total of 462 sugar mills in the country have produced 8.09 million tonnes of sugar, as of end-December 2016, which is 0.4 per cent higher than the preceding year’s production during the corresponding period.

As per industry estimates, the specific electricity consumption per tonne of sugar production varies from 200 kWh to 500 kWh based on the year of production. The total power requirement in a standard sugar mill of 3,400 tonnes of cane crushing capacity is about 4 MW per day. Meanwhile, the steam consumption varies from 30 per cent to 50 per cent per tonne of cane based on the capacity, evaporator vapour bleeding arrangement and age of the equipment used. By deploying the latest energy efficient equipment around 20 per cent of electrical energy consumption and 25 per cent of steam consumption can be reduced in sugar mills, while the specific power consumption can be brought down to 22 kWh per tonne of cane.

Further, the rising cost of production has impacted the margins of sugar producers. This has been a key driver for sugar mill owners to take energy conservation initiatives in order to reduce costs. The major reason for the high energy consumption in the industry is the presence of a large number of old, small capacity sugar mills, which have not invested much over the years in modernising or upgrading their process equipment.

A major concern of sugar mill owners is the corrosion and scaling of boilers and turbines, which causes heat insulating deposits in boilers resulting in failures, loss of efficiency, the need for frequent cleaning and increased cost of operations. A “film barrier approach” has been gaining acceptance in this regard. Under this approach, the film forming properties of aliphatic amines on divalent wet metal surfaces are utilised to provide much superior protection to the metal surfaces in boilers and turbines against corrosion and scaling. 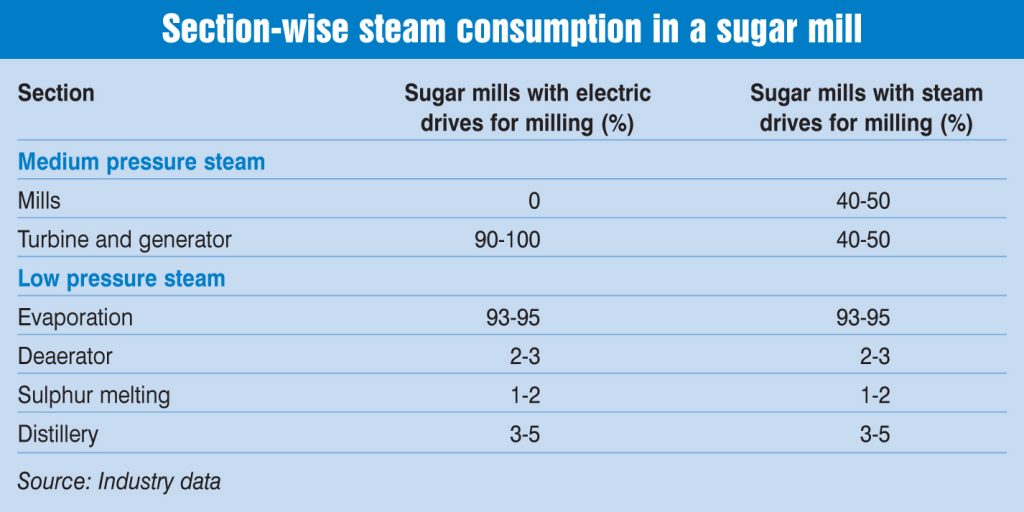 The usage of vertical continuous vacuum pans can also lead to significant savings as it helps maintain a steady consumption of vapour as compared to batch-type vacuum pans, which causes considerable fluctuations in steam consumption and leads to irregular sugar quality. It also ensures uniform functioning of the evaporator station.

The use of film-type sulphur burners also reduces the production costs and improves the sugar quality. The sugar juice purification process requires sulphur dioxide (SO2) as a clarifying and bleaching agent. However, in Indian factories, it is produced from imported sulphur in inefficient conventional tray-type batch burners, resulting in high processing costs, poor purification and decline in sugar quality. The new “film-type sulphur burner” produces SO2 of consistent quality, high efficiency, low energy consumption and well-regulated operations. Burner operations are controlled as per the process requirements pertaining to the quantity and quality of sulphur, and sulphur feed rate, through use of instrumentation and control systems.

Another upcoming trend is that of bagasse dryers. The concept involves drying bagasse as well as controlling air pollution. It is a unique device wherein the hot flue gases are mixed with wet bagasse from the mills. This wet bagasse gets dried up and accumulates all the ash and unburnt carbon with it. A planetary gearbox also comes under energy-efficient equipment, and is a cost-effective and compact alternative to conventional drives (comprising gear trains) and hydraulic drives. Some plants have successfully replaced the existing worm wheel reduction system with the planetary gearbox arrangement for all the crystallisers. 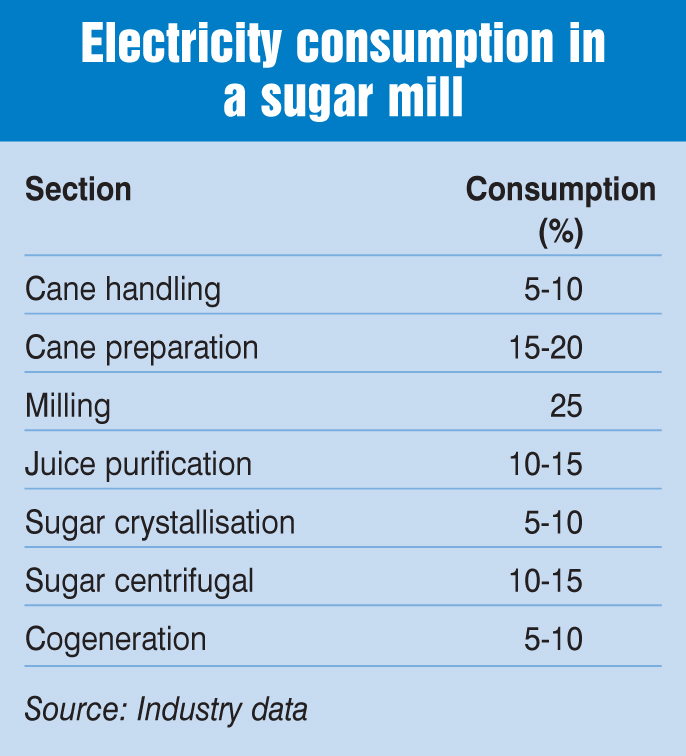 The need to reduce energy costs has also led to the use of mechanical vapour compression systems. In these systems, positive displacement compressors or multistage centrifugal compressors are used to raise the pressure and temperature of the generated vapours. Since mechanical compressors do not require any motive steam, all vapours can be compressed to elevated pressure and temperature, eliminating the need for another recovery system. The energy supplied to the compressor constitutes the additional energy input to the vapour. After the compression of the vapour and its subsequent condensation, through the transfer of heat to process fluid, the hot condensate leaves the system, which can be used as feed water/liquid for boilers.

Another key development in the sugar industry has been the usage of alternating current (AC) drives instead of direct cuttent (DC) drives. This is because of certain merits of AC drives as compared to DC drives. These include increased efficiency, lower maintenance costs, less harmonics and overall power savings of 3-5 per cent.

Membrane filtration is also a key solution that can benefit sugar mills in the long run. It is the process for the production of sulphur-free refined sugar without undertaking conventional refining. In this process, high temperature-tolerant polymeric membrane modules are employed for sugarcane juice purification in order to produce high quality sugar. These membrane modules are capable of withstanding continuous exposure to hot juice without any visible signs of deterioration.

Another important measure that sugar mills can take is to produce smaller-sized sugar instead of bolder sugar grains. This is because the production of bolder grain sugar leads to an increased energy consumption of 2-3 per cent.

The adoption of modern technologies for energy saving can help sugar manufacturers increase energy efficiency and reduce the ever-increasing cost of production. Improved energy performance by maximising the use of energy sources and energy-related assets can provide increased benefits for the industry.