The Deendayal Upadhyaya Gram Jyoti Yojana (DDUGJY) was launched in December 2014 with the objective of providing 24×7 power supply to rural households, completing the balance work under the Rajiv Gandhi Grameen Vidyutikaran Yojana (RGGVY), and strengthening the sub-transmission and distribution systems.

For the implementation of the scheme, the central government earmarked a budget of around Rs 334.5 billion, against the total outlay of Rs 430 billion allocated for the scheme. As part of the partial funding by the government, the special category states were given funds worth Rs 63.1 billion while all the other states were provided Rs 357.9 billion. In addition, around Rs 5 billion was estimated to be the total cost of works completely funded by the government and Rs 4.2 billion was allocated for other enabling activities. About 48 per cent of the total funds has been estimated to be used for unelectrified rural households and system strengthening while 38 per cent will be used for the separation of feeders on the basis of agricultural and non-agricultural usage. During 2016-17, Rs 29.46 billion has been drawn from the Ministry of Power, as of December 2016, achieving 98 per cent against a target of Rs 30 billion for the programme. These funds were disbursed in three quarterly tranches, one of Rs 14.7 billion and two of Rs 7.3 billion each.

Of the 18,452 unelectrified villages, 64 per cent have been electrified (as of January 2017), 4 per cent (750 villages) were found to be uninhabited, and work is now expected to be undertaken for the remaining 32 per cent or 5,923 villages. The government hopes to electrify the remaining villages by March 2017.

Uttar Pradesh has the largest number of villages at 97,813 and was given a budget of about Rs 69.5 billion under the DDUGJY. It has now electrified all but 13 villages. Bihar, with a total of 39,073 villages, received the second largest budget allocation of Rs 58.6 billion. About 33 per cent of the programme’s budget was allocated to these two states. Arunachal Pradesh has the largest number of unelectrified villages as of January 2017, with 1,229 of its 5,258 villages still without electricity. It is followed by Assam with 1,010 unelectrified villages against a total of 25,372 villages, and Jharkhand with 967 out of 29,492 total villages. 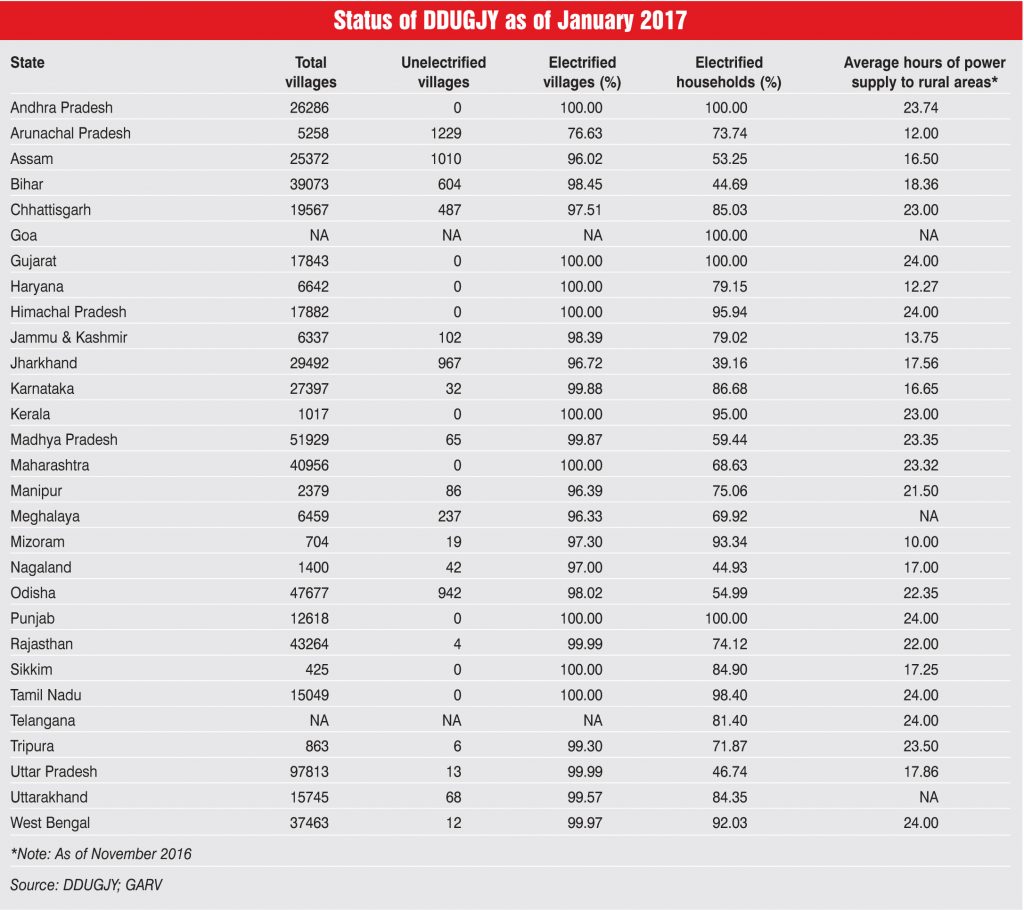 Along with the electrification of rural and remote areas, the programme has to ensure round-the-clock power supply to these areas. As of November 2016, rural areas in six states – Gujarat, Himachal Pradesh, Punjab, Tamil Nadu, Telangana and West Bengal – receive 24 hours of power supply in a day, while Andhra Pradesh, Tripura, Madhya Pradesh, Chhattisgarh, Maharashtra, Kerala and Tripura receive more than 23 hours of power in a day. Mizoram receives power only for 10 hours in a day while the rest of the states receive power for 12-22 hours in a day.

Over the past three decades or so, while the government has taken a number of rural electrification programmes in India, it has failed to make a major mark. The rural electrification rate was only 83 per cent back in 1991. However, on account of deterioration in the discoms’ financial health, rural electrification slowed down during the 1990s. It picked up only after 2005 with dedicated programmes such as the RGGVY. Since the DDUGJY’s introduction in 2014, the rural electrification growth has been fast-tracked. Under the DDUGJY, the states have either completed or are in the process of achieving complete electrification. In addition, the programme aims to achieve household-level electrification, with special emphasis on below poverty line households. However, there have been several roadblocks to the implementation of the programme. These include delays in the submission of detailed project reports by the concerned agencies and in obtaining approvals from the forest and environment, railways and other departments, which resulted in the delayed award of sanctioned projects to implementing agencies, as well as law and order concerns in remote and Naxal-affected areas.

These issues notwithstanding, the DDUGJY, as it approaches its deadline of March 2017, is expected to achieve 100 per cent electrification of the country’s census villages, thereby making it one of the most successful rural electrification programmes in the country till date.