Since the award of the first distribution franchise (DF) in 2006 by Mahadiscom, various utilities have attempted to adopt the DF model. While some are operating successfully, some were terminated due to various challenges like non-payment of dues, others were aborted at the bidding stage itself, and some remain to be awarded. Currently, there are 11 DFs operating in the country. The high level of aggregate technical and commercial (AT&C) losses has been the major driver of the DF model. The DF model offers an opportunity to discoms to bring down spiralling losses while also providing business opportunities to private players and enhanced services to consumers.

Over the past decade, various DF models have been adopted by different states. The use of various DF models has evolved from collection-based to input-based distribution franchisees (IBDFs), to input-based franchisee-incremental revenue sharing (IBF-IRS) and input-plus IBF. Currently, the IBDF model is operational in three states – Maharashtra (Bhiwandi and Nagpur), Bihar (Muzaffarpur, Bhagalpur, Gaya) and Uttar Pradesh (Agra) – while the input-plus IBF model is operational in Rajasthan (Kota and Bharatpur), and IBF-IRS is operational in Odisha. 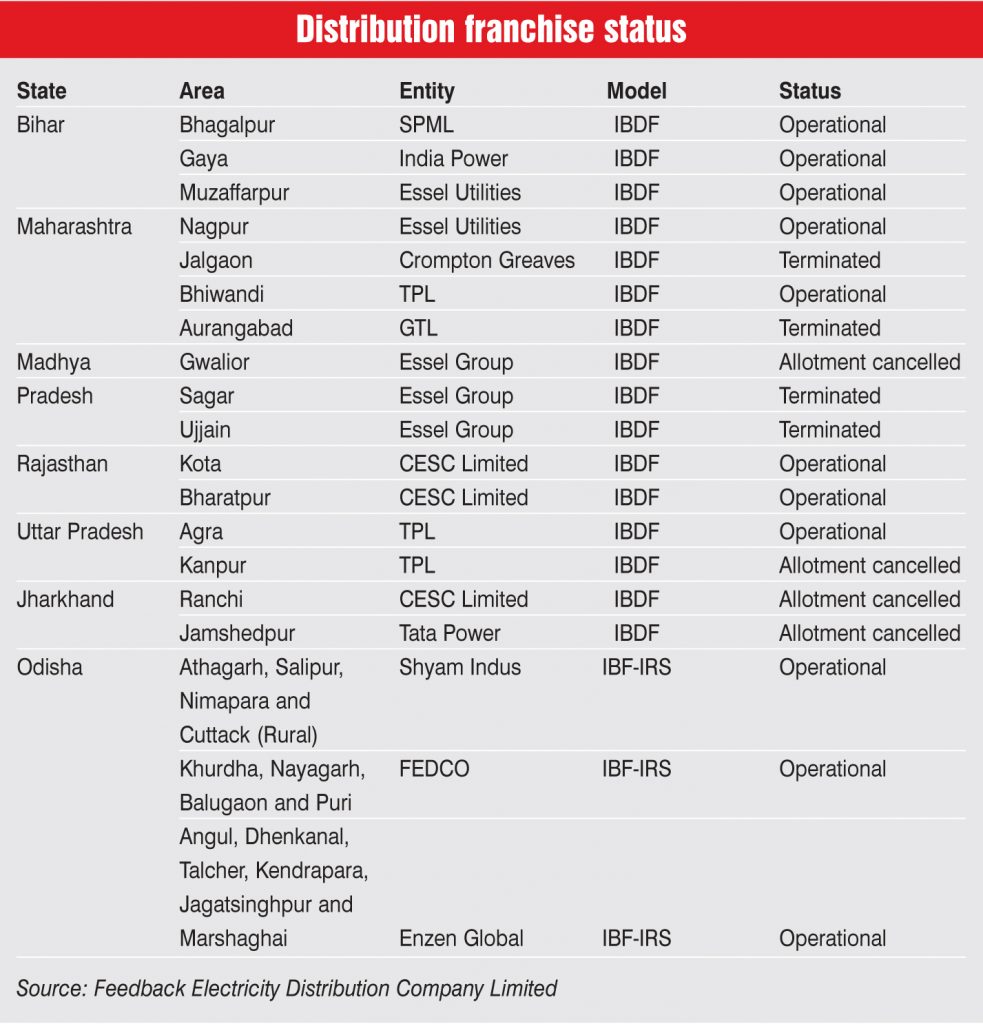 While there has been limited activity on the DF front over the past few years, the model has regained attention with franchise awards being made to CESC Limited in Rajasthan in June 2016. The company secured power distribution franchise contracts from Jaipur Vidyut Vitran Nigam Limited for supplying power in Kota and Bharatpur for a period of 20 years. It commenced power distribution in these cities in September 2016. Earlier, in December 2015, Ajmer Vidyut Vitran Nigam Limited had issued a franchise bid for Ajmer city. However, it has not been allotted yet.

Recently, Torrent Power Limited (TPL) entered into a renewal and amendment agreement to the distribution franchise agreement with the Maharashtra State Electricity Distribution Company (MSEDCL) for power distribution in the Bhiwandi circle for a further period of 10 years, with effect from January 26, 2017. Bhiwandi was the first urban franchise in India, which was awarded by MSEDCL to TPL in 2007 for a period of 10 years. The franchisee put in an exemplary performance, reducing AT&C losses in its area by over 35 per cent, from 61.3 per cent in 2006-07 to 25 per cent in 2015-16.

One of the major barriers to the development of DFs has been the resistance of consumers and discoms to the private sector. However, industry observers believe that with various private players successfully operating in the power distribution segment now, the DF model should see increased uptake in the future.

Modifying the existing models based on their underlying strengths and weaknesses could help in this. According to experts, a model that allows a franchisee to procure power from external sources at competitive prices may be developed. Since the power purchase costs are the largest cost element for franchisees, it would be worthwhile to explore. Further, it may be useful to look at a mix of rural and urban areas instead of focusing on only urban areas, which is the case with most of the franchises operating at present.