The presentation of the annual financial statement, the Union Budget 2017-18, was a key event last month, followed closely by the industry. This year’s budget exercise particularly raised interest for two important aspects – the advancement of the date of presentation of the budget as well as the merger of the Railway Budget with the General Budget. Budget 2017-18 was based on the theme – “Transform, Energise and Clean India”. Focus on higher spending on infrastructure, greater tax compliance, reasonable welfare funding and a reduction in uneconomical subsidies were some core areas covered in the budget this year.

There were a few other announcements pertaining to higher allocations to the flagship programmes – Deendayal Upadhyaya Gram Jyoti Yojana (DDUGJY) and the Integrated Power Development Scheme (IPDS), more incentives for LED domestic manufacturing and lowering indirect taxes to promote the use of renewables.
While these proposals augur well for the power sector, the budget, on the whole, failed to cheer the sector and fell short of meeting certain important industry expectations.

The absence of any mention of thermal or hydro projects was a major disappointment, according to industry experts, especially at a time when the power sector is reeling under stressed assets in these segments.

“We would have been heartened to see a direct head-on tackling of stressed power assets. However, while the Finance Minister talked about recapitalising the banks to the tune of Rs 100 billion, the Budget was silent about a direct measure to address this big challenge facing the sector,” says a research note by KPMG in India.

More so, in the backdrop of the Economic Survey 2016-17 which highlights these concerns. “Private power generation companies are reeling under cost-overrun pressure and this, coupled with low electricity prices, is hurting their profitability. Plant load factors (PLFs) in India are ‘exceptionally low’ and falling merchant tariffs and power purchase agreement rates have led to slower cash flow for private power generation companies”, notes the survey.
Even for the renewables industry, the only worthy mention was that of solar. According to research think tank, The Energy and Resources Institute (TERI), “The budget has refrained from stepping up allocations towards meeting India’s National Development Council (NDC) commitments on renewable energy and energy efficiency”.
“The renewable industry was hopeful that there would be an announcement to support the achievement of the 175 GW target”, says Tulsi Tanti, chairman and managing director, Suzlon Group.

Talking of wind in particular, the budget failed to meet some of the key demands of the industry. “The Budget is silent on the extension of the generation-based incentive for wind power projects, which is a negative for the wind energy sector”, says Sabyasachi Majumdar, senior vice-president, ICRA Limited.

Another industry demand was the extension of the tax holiday under Section 80-IA of the Income Tax Act, 1961 and the accelerated depreciation (AD) benefits for wind projects. The 10-year income tax holiday, which the power sector has been availing under Section 80-IA, was not reinstated and will end on March 31, 2017. The AD will be limited to 40 per cent from April 1, 2017, down from the current 80 per cent. “While the Ministry of New and Renewable Energy (MNRE) has been coming out with new subsidies to spur rooftop installations, the budget basically thwarts the momentum in rooftop by reducing the AD and tax benefits,” says a report by the consulting firm, Mercom Capital Group. 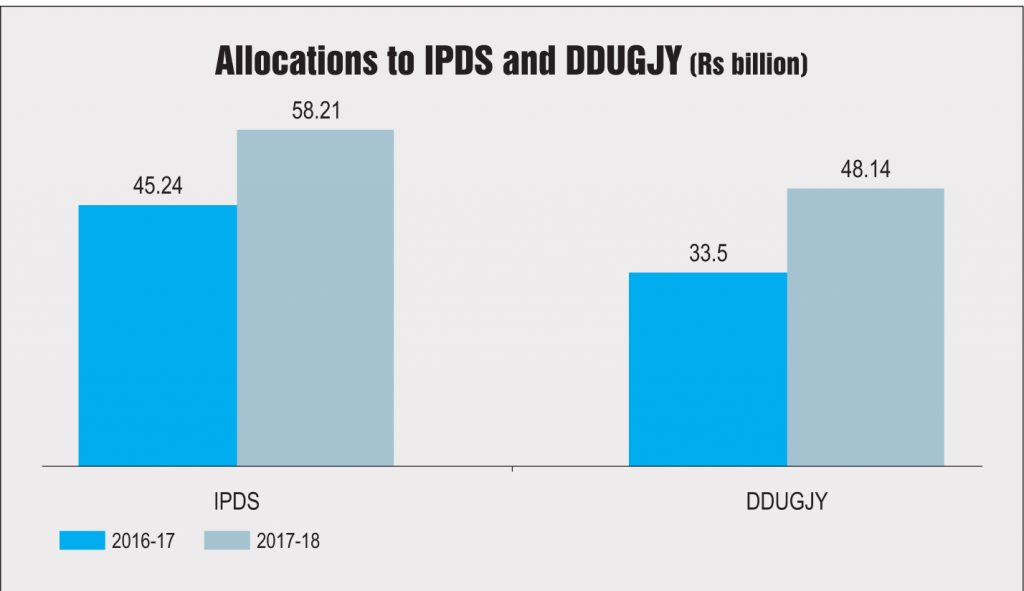 Besides these, the industry had also expected relief for renewable energy from the goods and services tax (GST) impact, a rollback of the clean energy cess, which was doubled in the last year’s budget, solar parks to be treated at par with special economic zones, with minimum alternate tax (MAT) exemption provided to projects within these solar parks.

Solar power development: Betting big on solar, this year’s budget has announced the development of an additional 20,000 MW of solar projects under the second phase of solar park development. Solar parks were originally envisaged to form 20 GW of the 100 GW goal. Thus, with this announcement, the solar park target has been doubled. Further, the government has proposed to use solar power in 7,000 railway stations. Work on 2,000 railway stations will be undertaken as part of the 1,000 MW solar mission. 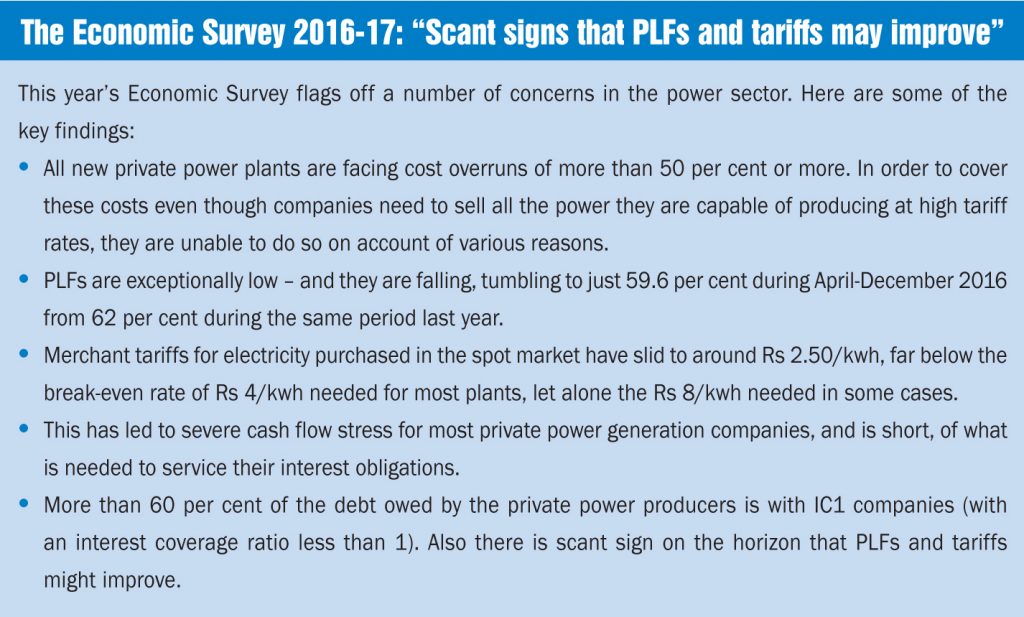 Clean energy equipment: A number of indirect tax proposals have been made in this year’s budget to rationalise the customs and excise duty structure for solar tempered glass (used in the manufacture of solar cells, panels and modules) as well as catalyst and resin (used in the manufacture of cast components of wind-operated electricity generators). For biomass and fuel cell-based energy, the indirect taxes such as customs and countervailing duties have been proposed to be reduced for the import of machinery. (For details, see table on indirect tax cuts).
LED lighting: The budget has provided for a reduction in the basic customs duty (BCD) from 10 per cent to 5 per cent for all parts used to manufacture LED luminaries and drivers. Also, parts imported for manufacturing LEDs (semi-finished inputs) that includes driver assembly and other such products will attract a BCD of 5 per cent. This will make the LED products of those manufacturers who assemble the LEDs in India cheaper, whereas those who are importing semi-finished products would witness an increase in costs. The move has been welcomed by the domestic industry and is aimed at promoting the Make in India initiative. Further, excise duties on all parts used in the manufacture of LED lights or fixtures are reduced to promote domestic manufacturing. 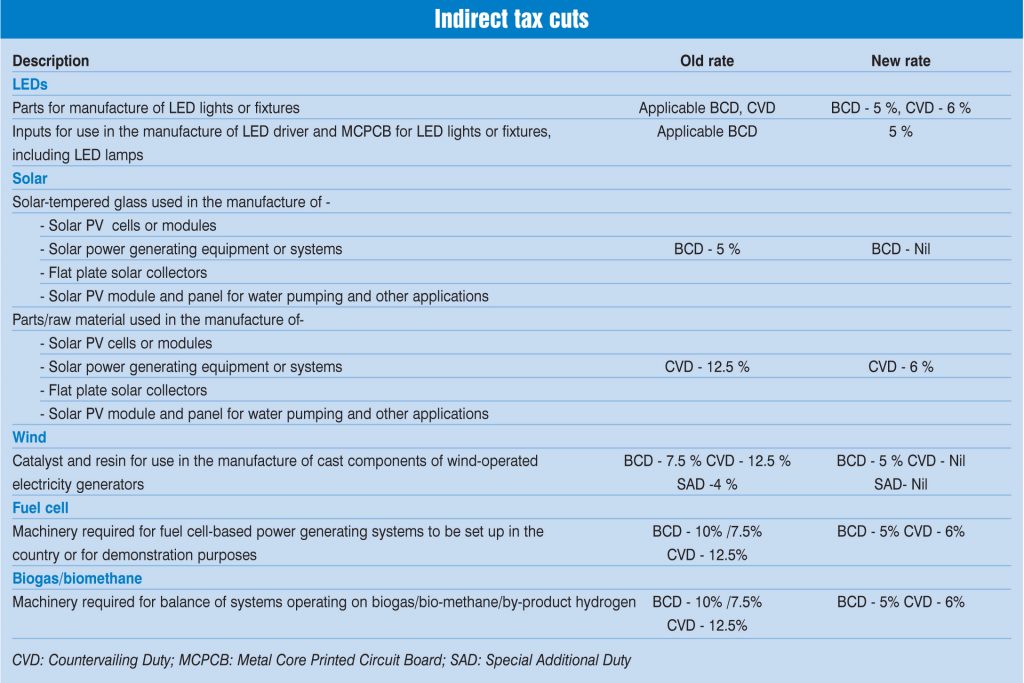 Summary
The budget proposals are expected to put a greater impetus on its rural electrification and solar power commitments, the two most ambitious reforms in the present government’s agenda. The fine print on the solar park capacity addition proposal will be keenly awaited by the sector. That said, with lack of provisions to provide any relief for other segments of the power industry, it remains to be seen whether the next few months will see any concrete policy action to reduce the stress facing the sector.