With huge increases in the per capita demand of energy in many countries, the global energy system needs to undergo significant transitions. According to a recently released report by the Energy Transitions Commission,  comprising global experts from energy companies, the investment sector, public and academic institutions, and foundations, energy transitions can help provide affordable and adequate power of 800-1,000 gigajoules per person as well as cut carbon dioxide (CO2) emissions from 36 gigatonnes (gt) to 20 gt by 2040.

An unchanged energy system could result in severe climate change, adds the report. The current levels of CO2 emissions are likely to result in global warming of over 4 °Celsius by the end of the century. Hence, the report suggests four transition strategies and two enablers along with country-specific variations to achieve the transition wherein the energy demand will be met and the global temperature rise will remain below 2 °Celsius.

The report suggests that the required energy transition is technically and economically possible, and would require rapid progress on four dimensions. The first dimension, decarbonisation of power combined with extended electrification, could reduce CO2 emissions by half against the business as usual scenario by 2040. A near-total-renewable-based power system providing electricity at $70 per MWh can be fully competitive with a fossil fuel-based power system by 2035. As power is decarbonised, electricity should be extended to a wider range of economic activities. Under a conservative scenario, around 10-20 per cent of fossil fuel usage could be reduced through electrification by 2040.

The second dimension of energy transition, decarbonisation of activities (such as transport or industrial processes) which are difficult to electrify at a reasonable cost will be an important driver of emissions reduction beyond 2040.  There are multiple decarbonisation routes like the substitution of existing fuel with biofuels, hydrogen and other forms of bioenergy, and carbon capture, storage and use. In order to promote the use of biofuels, research and development for lowering costs, and coalition of governments and the private industry for developing a future roadmap are required.

The fourth energy transition scenario is optimising fossil fuel usage within carbon budget constraints. A consensus on the sustainable scale of fossil fuel usage needs to be reached. The use of coal in developed countries must immediately begin to decline and be eliminated as rapidly as possible to balance out the unavoidable coal use in developing countries. The volume of gas consumption needs to remain broadly flat, replacing some coal-based power generation and heating applications, and the consumption of oil must peak in the 2020s, falling about 30 per cent below the current volumes by 2040.  The report notes that increase in the penetration of renewable sources of energy and decline in fossil fuel use will lower fossil fuel prices, which could undermine the energy transition by slowing down investments in the renewable energy segment. 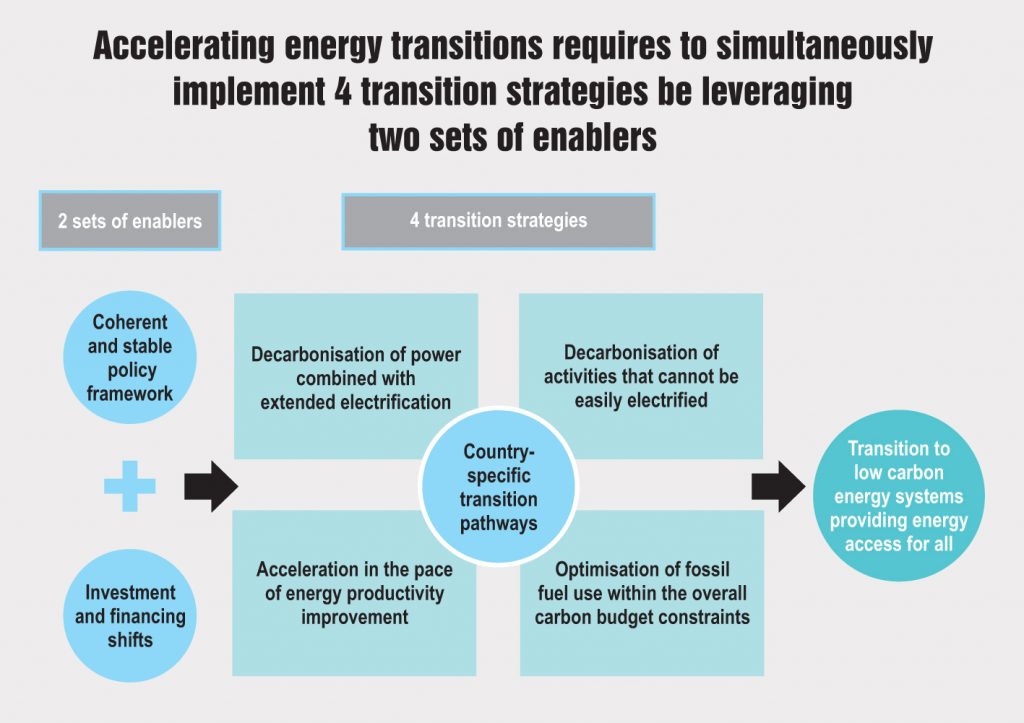 One of the key enablers of energy transition is a shift in the investment and financing trend. The report suggests that transition to a low carbon global economy will require additional energy system investments of $300 billion-$600 billion per annum compared with a business-as-usual scenario. In order to achieve a 2°Celsius scenario, between now and 2035, investments need to be lowered by $3.7 trillion in fossil fuels, increased  by $6 trillion in renewable energy and other low carbon technologies, and increased by $9 trillion in more efficient energy saving equipment and buildings. The change in investment and funding requirements calls for a shift in the public policy for fossil fuel companies and investors, including a reduction in the perceived risk and capital cost of low carbon power, atomised energy efficiency investments through appropriate regulation and decisions on fiscal subsidies, and greater participation by multilateral and national development banks for providing investment in emerging economies.

Another key enabler is the need for public policies to ensure that private stakeholders receive credible and reliable market signals and incentives. This requires appropriate carbon and energy pricing, phasing out of extensive fossil fuel subsidies that create incentives for wasteful consumption, support for low carbon technologies, market design and pricing mechanisms for the large-scale integration of renewable energy sources, demand management and technical standards for energy efficiency improvement.

The report suggests that though all the four elements of energy transition are important for every country, some important differences between countries need to be recognised. For low-income countries facing energy access challenges, there is an opportunity to leapfrog to new technologies and avoid unnecessary investments in fossil fuels. Densely populated countries with even lower income (including India) will find it difficult to meet energy needs with near-total renewables systems, while rich and lightly populated countries (including the US and Australia) do not face such challenges. On the other hand, emerging economies have an opportunity to get their energy productivity right the first time by avoiding the lock-in effects that make it difficult for some high-income countries to reduce their per capita energy use.

To conclude, while meeting the growing energy demand, it is necessary to address the environmental concerns for avoiding an impasse in the years to come. For this, changes in the investment scenario, participation of the stakeholder, and policy push are of vital importance.