The idea of introducing ancillary services in the country was first mooted by Power Systems Operations Corporation (POSOCO) way back in June 2010. After several iterations and consultations among the Central Electricity Regulatory Commission (CERC), the load despatchers and other stakeholders, the final regulations on ancillary service operations were notified by the CERC in August 2015. This was followed by the introduction of reserve regulation ancillary services (RRAS), the first load generation balancing services, on a pan-India basis on April 12, 2016.

During the past one year of its successful operation, RRAS has provided several benefits. There have been dramatic improvements in the frequency profile of the power system as well as in congestion management. System operators are using ancillary services as a tool to improve grid resilience during low probability, high-impact events like outage of large generating stations, and extreme weather events. “It is a multipurpose and handy tool for system operators and the grid as a whole. Ancillary services act as a thin layer of centralised system, imposed over the existing decentralised mechanism that mops up the excess capacity causing great economy without hampering the sovereignty of the involved entities,” says S.K. Soonee, advisor and former chief executive officer, POSOCO.

According to POSOCO, as of December 2016, a total of 46 RRAS providers with an installed capacity of 50,131 MW based on different fuel types participated in the RRAS market. A fully automated process for end-to-end despatch of such services is facilitated by an indigenous software application developed by the National Load Despatch Centre (NLDC), which is the nodal agency for implementing ancillary services, in coordination with the regional load despatch centres (RLDCs). The regional power committees (RPCs) issue weekly accounts for the accounting and settlement of RRAS across India. The CERC-approved detailed procedures, which were revised in November 2016 based on the working experience, outline the operating rules of the ancillary services market.

“The entire scheme of things including the regulation, procedures, software application, accounting and settlement, is home grown. We can change very quickly as we know what we have done,” informs Soonee. He also points out that the implementation of ancillary services has been self-sustaining so far, and not dependent on any funding unlike most other schemes.

The complexity of power system operations is increasing by the day with the rapid increase in the number of entities, particularly renewable energy generators, connecting to the all-India synchronous grid and the successful operationalisation of a fully fledged power market. This is an appropriate time to expand the scope of the ancillary services to private sector plants, merchant power plants and state sector stations.

In its half yearly review (November 2016) and report on electricity market data analysis (March 2017), POSOCO has illustrated the positive impact of and challenges relating to RRAS…

Larger balancing area and improved frequency profile: Ancillary services act as a “fast tertiary” reserve in the present arrangement and have helped achieve meeting an all-time record demand of around 160 GW (September 9, 2016) in a secure manner with a better frequency profile. The frequency has remained within the operating band (49.90-50.05 Hz) for over 75 per cent of the time.

Real-time congestion management: Earlier, congestion was managed in real time by applying congestion charges and in the process, all entities upstream and downstream of the congested corridor were impacted. The implementation of ancillary services has provided a mechanism for re-despatch of generation reserves before imposing congestion charges. For instance, on June 29, 2016, the total import of the northern region was consistently more than its  total import transfer capacity. Prior to the issuance of the congestion warning to the northern region constituents, all available spinning reserves, up to a maximum of 673 MW, in the NR RRAS providers were despatched through regulation up RRAS. “We constantly remind the load despatchers to stop thinking of load shedding if the frequency dips and ask them to despatch the capacity available under RRAS instead,” says Soonee. 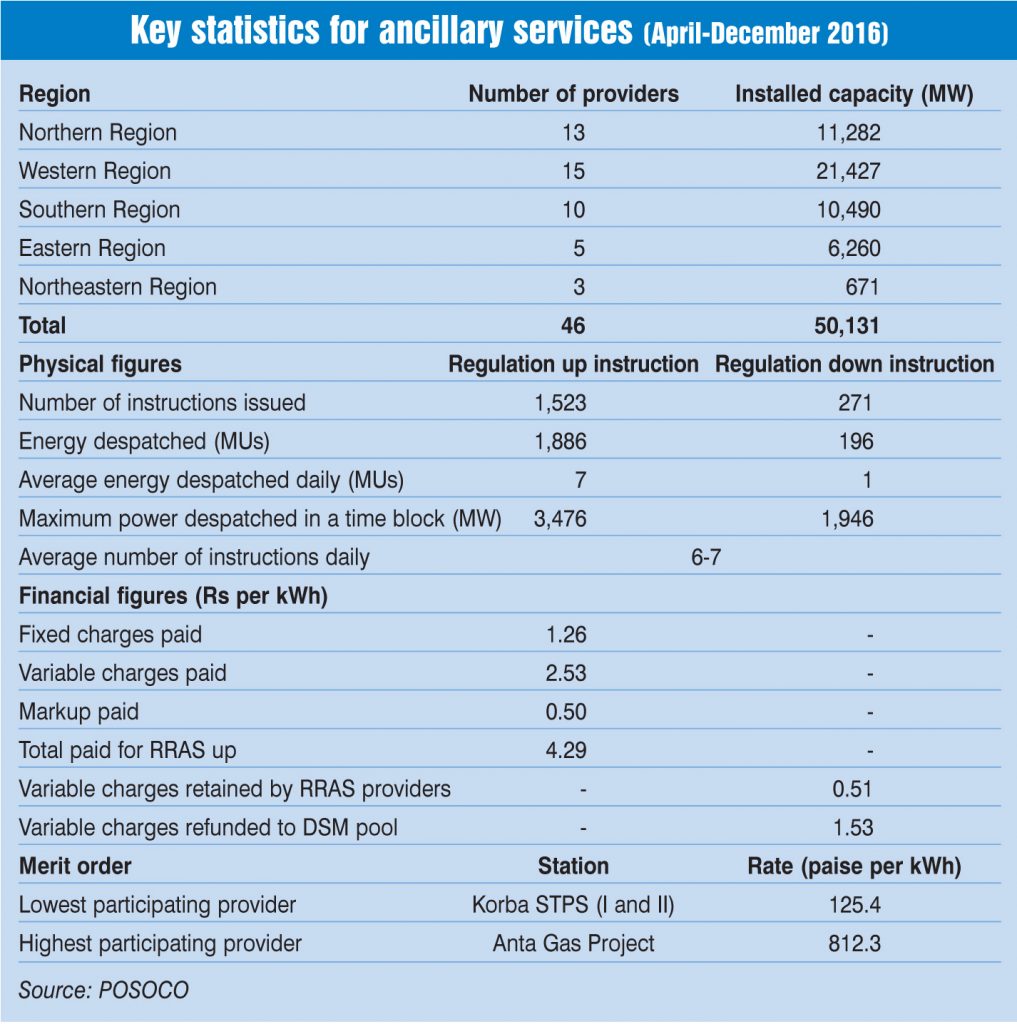 Grid resilience: Ancillary services despatch has been very helpful during storms and unprecedented weather conditions. For instance, during stormy conditions in the northern region (May 24, 2016) and southern region (May 20, 2016), regulation down instructions were given, based on merit order throughout the country. Under RRAS, a total of 1,886 MUs and 196 MUs were scheduled for regulation up and regulation down, respectively, to virtual ancillary entities (VAEs) from April 12, 2016 to December 15, 2016. The majority of the RRAS up instructions were triggered by the requirement to meet the load while the RRAS down instructions were on account of extreme weather conditions.

Implementation of merit order: “For the first time, merit order is being implemented in a very transparent manner. It was hitherto not possible, but now the list is updated every 15 minutes,” says Soonee. The highest and the lowest variable charges based on merit order varied between 812 paisa per unit and 125 paisa per unit respectively during the period up to December 15, 2016. Most of the ancillary services (RRAS up instructions) that have been despatched were the cheaper coal- and gas-based stations at variable charges of lower than Rs 3.31 per unit. It may be noted that payment is made only to performing generators, which substantially reduces the chances of gaming.

Quantifying reserves: “For the first time, reserves are getting quantified every 15 minutes. Earlier, it was an abstract figure,” says Soonee. The reserve available for use under the ancillary services is the undespatched surplus available in the CERC-regulated generating stations. This fluctuated in the range of 2,000 MW to 12,000 MW during the period up to December 2016. “Information regarding available reserves will be very useful for integrating renewables into the grid as the variability can be controlled in a centralised way without any red tape,” he adds. 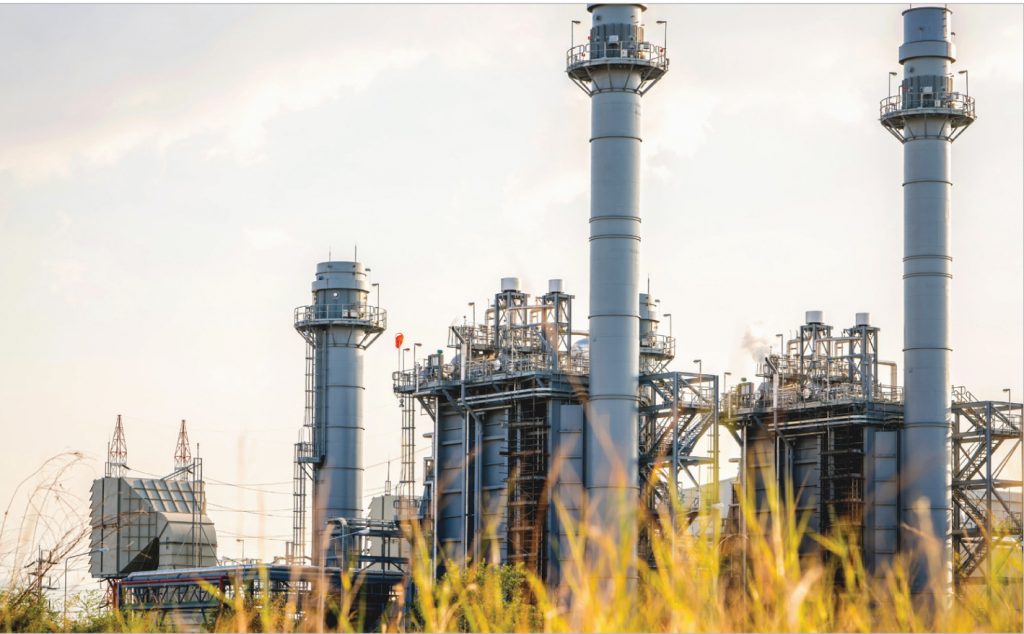 Minimum threshold quantum despatched: Many plants have a reserve of less than 10 MW, which is available for despatch under RRAS. To avoid too many generating stations getting a very small quantum of despatch instruction, there is a need for a minimum threshold value for RRAS up or down.

Reserves quantum available for despatch under ancillary: There are periods when only a small quantum of undespatched surplus is available for despatch, especially during high demand periods. It is the converse during low demand periods. There is a need to bring in additional machines on bar and maintain spinning reserves to facilitate flexing of generation to meet ramp requirements. It is suggested that a 5 per cent reserve be maintained by all RRAS providers to ensure sufficient reserves. The CERC may also notify the technical minimum to go up to 55 per cent of the installed capacity.

Fixed charge refund: In addition to other charges, the fixed charge component is paid from the DSM pool account to the RRAS provider, who in turn pays it to the original beneficiaries or discoms. This market design has created a perverse incentive for the discoms to take a passive approach and avoid keeping reserves on bar as they get the refund of the fixed charges anyway. Hence, the provision for the refund of fixed charges needs to be reviewed.

Others: The concept of a VAE was introduced in the regulations for the purpose of scheduling and accounting under each of the RLDCs. However, only RPCs of the eastern and north eastern regions have created VAEs as notional members of the DSM pool while others are yet to adopt this practice. Another requirement is the introduction of the concept of “gate closure” in the scheduling process to avoid simultaneous changes in the schedule allowed by the decentralised process, which gives liberty to all the entities to alter schedules based on their requirement. There is a need for the implementation of a national pool account for settling accounts related to ancillary services, which are applied at the national level instead of settling at the regional level as is done now.

To address the above challenges, the key requirements are sustained availability of spinning reserves; review of the refund of fixed charges; streamlining of the accounting and settlement system; operationalisation of the national pool account; revision of the DSM rate vector; introduction of gate closure in the scheduling timeline; move towards five-minute scheduling and despatch; and participation of hydro stations as RRAS providers.

Currently, the implementation of ancillary services is load-following and for congestion management. It covers only CERC-regulated generating stations, and there is a need for state generators to be brought under the ambit of ancillary services. This can help in balancing requirements, particularly in renewable-rich states. This initiative needs to be taken by the respective state electricity regulatory commissions. For this, a prerequisite would be to implement the recommendations relating to scheduling, accounting and metering at the state level as mentioned in the “SAMAST” report adopted by the Forum of Regulators in July 2016.

The existing regulations allow the expansion of the ancillary services to other generators. However, to participate in this market, these generating stations must get aligned with the existing system, declare their tariff and capability upfront, and update the same periodically besides putting in place the requisite mechanisms.

As the power sector moves ahead, other forms of ancillary services like reactive power support and black start, which are very niche products, also need to be considered in the long run. For now, the flagship ancillary service is working smoothly and has provided several benefits to the participants. The system operators have an additional tool to ensure grid stability while the generators have an additional avenue other than the regular contracts for revenue generation. The process for broadening the scope of ancillary services, which is under deliberation, must be expedited to ensure that the benefits of these services accrue to all the grid entities sooner than later.

November 2018
Distributed generation (DG) refers to a variety of technologies that generate electricity near the end users. Some [...]
More

August 2017
The Indian power sector has been struggling with issues such as infrastructure inadequacy, and transmission and distribution [...]
More 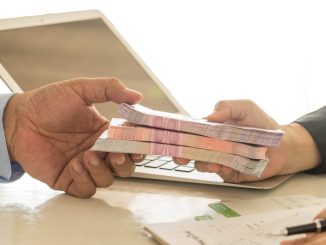