The rising demand for power in India has been met increasingly through coal-based power, which accounts for 60 per cent of the country’s total installed capacity base of 320 GW (as of March 2017). The steady increase in coal-based capacity has led to a rise in carbon and pollutants emissions as well as utilisation of natural resources such as water at a faster pace. As per the Central Electricity Authority (CEA), the absolute carbon dioxide emissions from the power sector increased from 598.35 million tonnes (mt) in 2010-11 to 805.40 mt in 2014-15 – recording a compound annual growth rate (CAGR) of 7.7 per cent. Further, the average emission rate of coal-based generation was 1.01 kg CO2 per kWh in 2014-15.

Given the major share of coal in power generation, it is essential to follow a multi-pronged approach to reduce emissions, especially in the wake of India’s Intended Nationally Determined Contribution under the United Nations Framework Convention on Climate Change in Paris. The country has committed to reducing the emissions intensity of its GDP by 33-35 per cent by 2030 from the 2005 level. This necessitates adoption of environmentally compliant the technologies.

Another major driving factor for thermal power plants (TPPs) to lower their emissions has been tightening of the existing water consumption and emission standards for TPPs in December 2015 by the Ministry of Environment, Forest and Climate Change (MoEFCC) (see table for revised norms). Further, new emission standards for control of sulphur oxides, nitrogen oxides and mercury released from coal-based plants, which were not in place before, have now been notified in these regulations. In this backdrop, TPP owners would need to retrofit and install new systems to comply with the ministry’s norms by the December 2017 deadline.

Power generation from coal results in about 38 per cent of carbon dioxide (CO2) emission in the atmosphere. Therefore, it is prudent for power plant developers to adopt technologies that result in lower coal consumption.

Supercritical technology-based units have about 2 per cent more efficiency than subcritical technology-based power plants. Up to March 2016, 51 units based on supercritical technology have been commissioned. As per the CEA’s analysis, the installation of these units has helped reduce CO2 emissions by nearly 6.073 mt. Further, advanced ultra supercritical (AUSC) technology helps reduce 20 per cent CO2 emission at source. It also leads to 20 per cent savings in coal consumption, compared to a subcritical plant, and about 11 per cent savings in coal consumption, compared to a supercritical plant. In the backdrop of these benefits, a research and development (R&D) project is under-way to indigenously develop AUSC-based power plants with steam parameters of 310 bar and 710 °C.

In August 2016, the Cabinet Committee on Economic Affairs approved the proposal of the R&D project for setting up a TPP based on AUSC technology. The TPP will be developed by Bharat Heavy Electricals Limited (BHEL) in association with the Indira Gandhi Centre for Atomic Research and NTPC. The project entails an investment of Rs 15.54 billion and will be funded with a grant of Rs 9 billion from the Department of Heavy Industry. The proposed project, with a rating of 800 MW, would come online by 2020.

SOx emission is caused due to burning of sulphur present in fossil fuels, especially coal and oil. Since Indian coal has low sulphur content (0.3 per cent-0.5 per cent), the MoEFCC prescribes the dispersion of SOx emissions through the provision of tall stacks in coal-based generation units less than 500 MW. For units higher than 500 MW and stations with a capacity aggregating 1,500 MW-2,000 MW, the MoEFCC prescribes space provisions for future installation of flue gas desulphurisation systems (FGD).

NOx emitted from the combustion of fossil fuels is oxidised to form nitrogen dioxides and nitrogen trioxides which result in acid precipitation and fog. The primary emission control technology for NOx mitigation includes installation of low NOx burners or use of ultra-low nitrogen content fuels. The secondary emission control technology used in power plants to control NOx emissions includes selective non-catalytic reduction and selective catalytic reduction (SCR) techniques. Also, mercury emissions from power plants are controlled by the systems provided for NOx and SOx (SCR and FGD) along with ESPs.

Since Indian coal has a high ash content of 30-45 per cent, it is a major source of particulate emissions. Several types of emission control devices can be used in power plants such as electrostatic precipitators (ESPs), fabric filters, cyclone separators, high temperature and high pressure particulate control, which help thermal units to meet high efficiency and high reliability requirements. 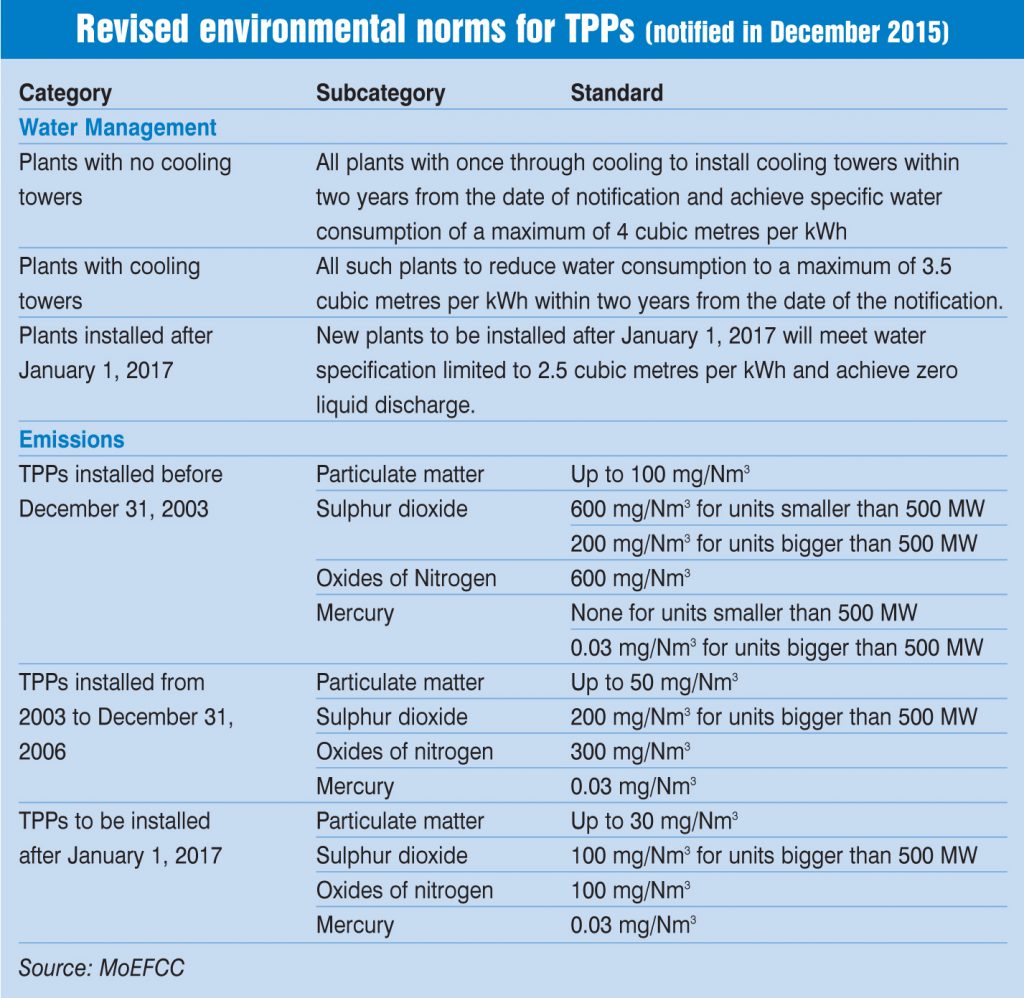 TPPs require significant volumes of water for various applications such as boiler feed, condenser cooling, bearing and seal cooling, ash handling and lubrication of pumps. According to the revised environmental regulations issued by the MoEFCC, all new plants to be installed after January 1, 2017 are required to meet specific water consumption up to a maximum of 2.5 cubic metres per MWh. New plants to be installed after January 1, 2017 will also need to achieve zero wastewater discharge. However, with the installation of FGD systems in TPPs due to SOx emission limits prescribed in the revised regulations, a higher water consumption requirement of about 3 cubic metres per MWh is estimated. A shift to new technologies that conserve water such as dry cooling systems is one of the options to lower the water consumption. These technologies can reduce plant water requirements by around 80 per cent. Further, a shift to dry ash handling from wet ash handling through slurry, recycling drain wastewater and rationalisation of per capita water consumption in townships are some other strategies that can be considered.

The MoEFCC stipulated existing power plants to meet the revised environmental norms within two years of the notification, while the new power projects were required to comply from January 2017 onwards. However, given the technical and financial challenges involved in upgrading emission control systems and the lack of manufacturers of such systems in the country, the ministry is reportedly planning to extend the compliance deadline by two years.

As per ICRA’s estimates, the new norms are expected to impact the aggregate coal-based capacity of 261 GW, which comprises operational capacity of 187 GW and under-development capacity of 74 GW. Coal-based power projects will have to invest in additional equipment, which complies with the revised emission norms of around Rs 6 million-Rs 10 million per MW, based on the vintage of the plant. This aggregates to a capex requirement of about Rs 1.2 billion over the next two to three years, raising the generating cost incurred by gencos by 13 paise to 22 paise per unit. Further, the equipment installed to comply with the standards will also incur additional operations and maintenance costs. Gencos might be able to pass on the higher cost of generation to the off takers. This would, however, put an upward pressure on the retail tariffs.

The CEA’s draft National Electricity Plan projects that no coal-based capacity addition would be required during 2017-27 and the under-construction coal-based capacity of over 50,000 MW would be sufficient to meet power demand in conjunction with electricity from renewable, hydro and nuclear sources. Though the country’s energy mix is diversified, coal-based power is expected to retain its major share at least in the medium term. The total CO2 emissions are expected to increase to 983 mt by 2017 and 1,165 mt by 2027. Therefore, the sector needs to adopt environment-friendly” technologies.

The country’s dependence on coal for meeting its energy needs has resulted in the generation of huge quantities of ash over the years. However, ash utilisation levels have remained dismal. Of the total installed capacity […]