The power sector has witnessed significant growth in recent years. Generation capacity has increased by almost 50 per cent over the past five years. The transmission and distribution (T&D) network has also expanded considerably during this period. This growth has led to an increase in demand for power system equipment, including switchgear.

According to the Indian Electrical and Electronics Manufacturers’ Association (IEEMA), switchgear is the second biggest segment in the Indian electrical equipment industry. Switchgear is a combination of devices that are used to monitor, regulate, control, protect and isolate electrical equipment throughout the grid. These devices include switches, fuses, circuit breakers and relays. Together, this equipment helps in regulating power supply across the system while protecting against overload and short circuits. Switchgear is also used to de-energise the circuits for repair, maintenance and testing purposes. Based on the load bearing capacity, the market for switchgear in India is categorised into three segments – low voltage (LV), medium voltage (MV) and high voltage (HV).

In terms of volumes, the LV segment grew by 14.8 per cent while the MV and HV segment grew by only about 5 per cent in 2015-16. The increase in the LV segment was mainly due to the growth in LV circuit breakers and switch fuse and fuse switch units. Other major products in the segment such as power contactors, power switches and overload relays showed negative growth. During 2015-16, MV circuit breakers witnessed a marginal growth, while the production of HV circuit breakers declined by around 5.2 per cent. Meanwhile, the volume of isolating switches (MV and HV segment) grew by almost 16 per cent. 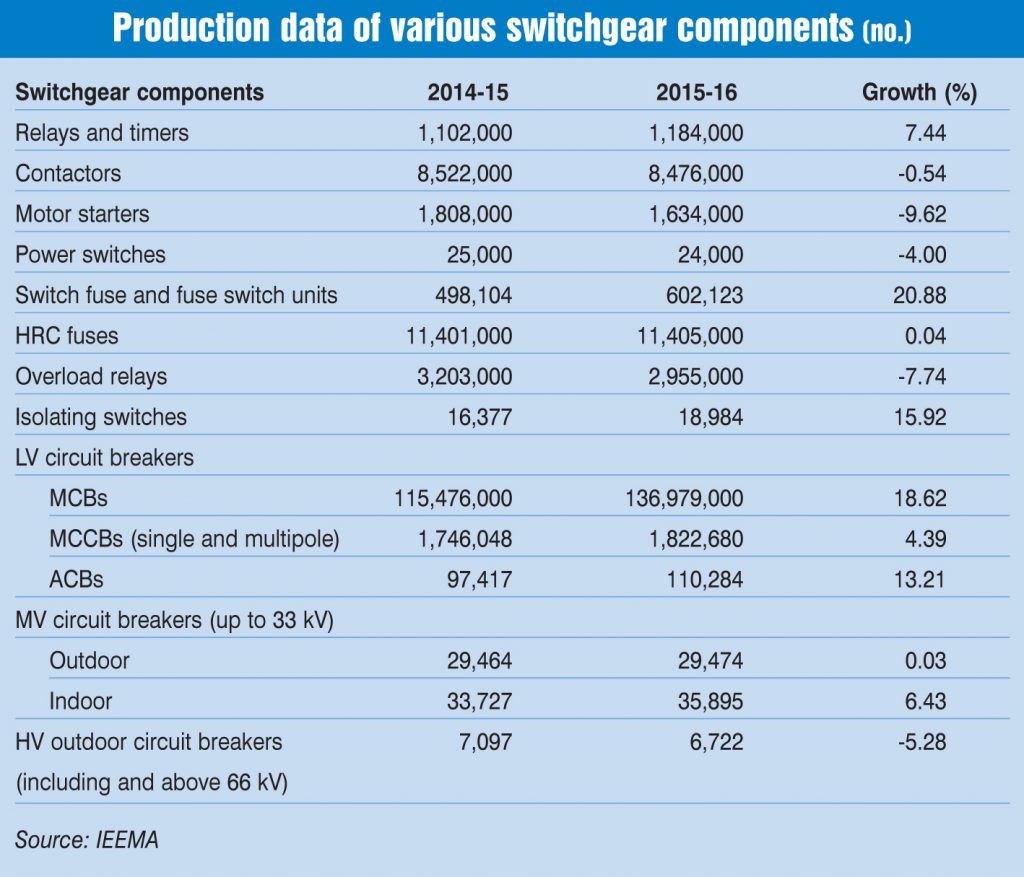 Both imports and exports form a significant part of the switchgear industry in India. The major sources of switchgear imports for India are China and Korea, while the major importers of Indian switchgear products are the US, the Middle East and South Asian countries.

While studies have indicated that the impact of imports is not too high in the LV segment, for the HV segment, large-scale imports have led to the under-utilisation of capacity, especially in the HV GIS segment. Overall, imports continue to impede growth in the switchgear market.

The switchgear industry has registered good growth in the past year. The key growth drivers in the LV switchgear segment have been the infrastructure sector and manufacturing industries. The MV and HV segment has grown in capacity on the back of various government schemes such as the Ujwal Discom Assurance Yojana (UDAY), the Deendayal Upadhyaya Gram Jyoti Yojana and the Integrated Power Development Scheme. However, the slow implementation of these schemes has resulted in overcapacity and strong competition in the industry.

Going ahead, these schemes are likely to continue to push the demand for switchgear. With UDAY, the financial position of discoms is expected to improve and therefore their spending on distribution networks is likely to go up. As per the Central Electricity Authority’s draft National Electricity Plan (Transmission), 2016, a line length addition of over 100,000 ckt. km and a substation capacity addition of about 290,000 MVA is envisaged during 2017-22. This will drive the HV switchgear market. Further, the government plans to add significant renewable energy-based capacity in the next few years. Given the intermittent nature of renewables, switchgear has an important role to play in the smooth operations of the grid. Meanwhile, the LV segment is expected to grow at a steady rate with overall infrastructure development, and growth in the residential and commercial segments.

In a power-hungry country like India, the generation segment has garnered much more attention compared to the transmission segment. It is only during events such as the 2012 blackout that attention shifts towards the country’s […]

In one of the largest takeovers in the power sector in recent years, Adani Transmission Limited (ATL) will acquire Reliance Infrastructure Limited’s (RInfra) integrated power business in Mumbai. This is the second deal between the […]

Sterlite Power has witnessed robust operational and financial performance over the past two years despite the Covid-19 pandemic. The company’s long-term outlook is all about clean and sustainable energy, keeping the transmission grid up and […]