The Ministry of Power (MoP) published the Tenth Annual Integrated Ratings for the review year 2020-21 in August 2022, comprising insights and ratings on the operational performance and financial condition of around 76 discoms, comprising 46 state discoms, 11 integrated power departments and 14 private discoms. Broadly, the discom ratings use mo­dified standards including the incorporation of quantitative parameters from the regulatory filings of discoms, in addition to the replacement of the revenue ac­crual metrics to cash-adjusted metrics. The MoP has also set up a committee to review the discom ratings quarterly so as to reflect the impact of regulatory chan­ges on discoms as well as of pivotal eve­nts pertaining to specific discoms such as defaults or addition of debt.

In the tenth rating exercise, the absolute cash-adjusted gap (that is, losses) in the distribution segment has been calculated for the first time. The cash-adjusted calculations show that the financial deficit of the discoms is larger than previously recorded and has risen over 2019-21. The national absolute cash-adjusted gap in the distribution segment is Rs 1.13 trillion. This rise is predominantly owing to the rising loss per unit of energy of sold (that is, the ACS-ARR gap), considering that the gross input energy during the pe­riod remained almost constant. The sector’s total liquidity gap is nearly Rs 3.04 trillion. The discoms’ current liabilities of Rs 6.56 trillion exceed their overall current assets of Rs 5.27 trillion and are al­mo­st twice the value of their current liquid assets of Rs 3.52 trillion.

Forty-four discoms out of 60 have implemented auto-pass through of fuel costs. This is especially important in the context of rising coal and natural gas prices, as it ensures that the discoms will pass the rising fuel costs to consumers and re­tain their financial sustainability.

The successful financial performance and operational excellence of certain discoms in states such as Gujarat and Har­yana, and of privately owned discoms in 2020-21 can be attributed to the best practices instituted by them. These innovative measures include the implementation of high voltage distribution systems and underground cables, bifurcation of feeders based on loading, rerouting of feeders, and replacement of conductors to reduce technical losses. Other organisational measures include the creation of a dedicated team for data-based loss monitoring at the substation and feeder levels, and consumer engagement programmes. These successful discoms have also instituted financial measures to enhance working capital and taken cost management measures. Overall, discom-level initiatives, along with the impleme­ntation of central government schemes are expected to improve the operational and financial performance of discoms going forward. N 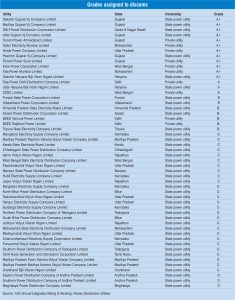 Smart metering is a key focus area of the government, to address the challenge of commercial losses as well as inefficiencies in the distribution segment. Although the national aggregate technical and commercial (AT&C) losses stand […]

Electricity demand in India has turned buoyant in the current fiscal with the recovery in economic activity post the second wave of Covid-19, as well as a favourable base effect. Demand increased by 13 per cent in the first half of 2021-22 over the corresponding period of the previous year, and is likely to end the year with a year-on-year growth of 8-8.5 per cent. […]

A Success Story: How distribution privatisation turned the national capital into a global city