Ukraine has been taking all the necessary steps to secure its membership in the European Union (EU) and for the integration of its power grid into that of Europe’s. The country’s transmission system operator (TSO), National Power Company Ukrenergo, is also working towards achieving synchronisation between Ukraine’s power grid and the European Network of Transmission System Operators for Electricity (ENTSO-E).

Ukrenergo has assessed the current technological readiness of the Ukrainian power grid to join ENTSO-E at 15 per cent. However, the company plans to reach a 99-100 per cent target in five years. The aim is to increase the technically possible power exchange capacity between the Ukrainian power grid and ENTSO-E from 885 MW to 2,200 MW in five years and to 4,000 MW in 10 years. In order to achieve these goals, the company has approved a grid development strategy for the period 2017 to 2026. The strategy has been drafted based on the experience of system operators from Austria, Germany, Poland, the Czech Republic, Slovakia, Georgia and Hungary.

The document clearly defines the benchmarks, tasks and goals for  the company’s operations for reorganising it into an ENTSO-E integrated operator. The key elements of the strategy include institutional rebuilding (in the context of the Ukrainian power grid’s integration into ENTSO-E, operations in the conditions of the new electricity market and corporate governance reforms), technological re-equipment of infrastructure (through information technology, introduction of new despatch solutions) and increasing operating efficiency (through enterprise resource planning systems, quick decision-making and reduction of operating expenses that influence tariffs). The document also discusses the interim goal implementation benchmarks for the near (one or two years), medium (five years) and long terms.

At present, Ukrenergo is finalising the negotiations pertaining to the connection agreement with ENTSO-E. The development strategy defines the rights, obligations and conditions to facilitate the smooth synchronisation of power grids. It primarily focuses on following a well-equipped guide for grid operations, meeting dynamic requirements for grid stability, ensuring safe operations, maintaining security in the continental grid of Europe and developing a roadmap for grid synchronisation.

To this end, Ukrenergo has signed a memorandum of cooperation with Elia Grid International, the international consultancy of the Elia Group, for harmonising the country’s power grid with ENTSO-E. According to the memorandum, the partners will harmonise all standards and operational processes of the company with the regulations and requirements of the European TSOs and ENTSO-E. In addition, the companies will cooperate in other areas such as market development. They will analyse the impact of a new market model on the company’s operations, support the establishment of a balancing mechanism that corresponds to the European legislation, and participate in the development of an efficient economic framework. Besides, they will focus on the strategic development and corporate governance, asset management, network development and operational activities of Ukrenergo. 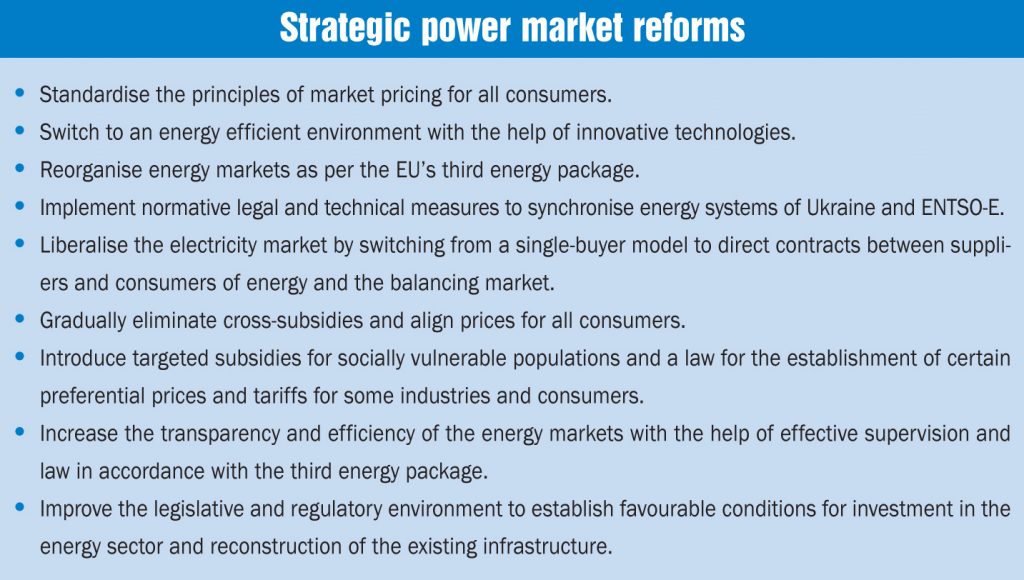 Operations under the new power market

At present, the power distribution sector in Ukraine is in the hands of regional energy utilities that occupy a monopoly position in each region. This has led to the absence of price competition between power producers and its importers. To address this situation, Verkhovna Rada (Ukraine’s parliament) passed a new bill on the country’s power market on April 13, 2017. The bill proposes that generators should sell their energy in different markets such as the bilateral power trade market, the day-ahead market, the intraday market, the balancing market and the auxiliary service market, at different time periods. The move will allow the market to set the power tariff and enable consumers to choose their preferred tariff packages. In addition, the bill promotes the concept of a trader – a business entity engaged solely in the resale of power, except for retail sale to consumers. It is aimed at creating efficient market conditions along with the European model in the country’s power sector. The bill is expected to allow Ukraine to integrate into the European energy grid instead of the Russian one, and help eliminate the manual pricing mechanism for power and coal. The bill has also introduced the requirements of the EU’s Third Energy Package, including unbundling of electricity distribution and transmission companies. It will have a transition period of two years. The grid development strategy for 2017-26 outlines a series of strategic tasks that are associated with the power market reform (see box).

Ukrenergo as a system operator is currently facing two major problems in managing its grid infrastructure. The first problem pertains to obsolete equipment that fails to provide real-time information, which is necessary for operational calculations. Second, with the ongoing development of alternative sources of energy such as wind and solar, Ukrenergo is looking for the appropriate forecasting techniques required for a balanced grid.

According to the latest strategy, the TSO plans to solve these problems by introducing smart grid technologies. To achieve these objectives, Ukrenergo is planning to invest $48.5 million in smart grid solutions. The project, which will be initiated in 2018, is being funded by the World Bank and the Clean Technology Fund. It is expected to improve the overall reliability of the Ukrainian power transmission system.

Ukrenergo is planning to invest in a portfolio of projects worth Euro 1.5 billion for the complete automation and modernisation of the existing substations. To this end, it is seeking the support of Germany’s development bank KfW. The company aims to implement projects that are important in terms of technology and infrastructure. As per this strategy, Ukrenergo will launch multiple pilot projects in the next one to two years to introduce remote control technologies at 102 substations. The objective is to enhance the reliability of energy system performance and power transmission.

Meanwhile, to strengthen its power network, Ukrenergo is undertaking several power transmission projects, which are at various stages of development. One of the key projects is the Rivne-Kyiv transmission project. It involves the construction of 488 km of lines at the 750 kV level to increase the reliability of power supply to consumers in the Kyiv region. The project will help transfer power from the Rivne and Khmelnitsky nuclear power plants (NPPs) to the central and eastern regions of Ukraine. The project is also expected to improve the overall stability of the grid system, which in turn will increase the country’s power export potential. The project is targeted for commissioning in 2020 and is currently at the final stages of construction. In addition, there is the Zaporizhzhya-Kakhovka project at the 750 kV level, which entails the construction of a 187 km line between the Zaporizhzhya NPP and the Kakhovka substation by 2017. The project also includes the construction of the 28 km, 330 kV Novokakhovska-Ostrovska diversion line and the 17 km, 330 kV Novokakhovska-Khersonska diversion line. The project will improve power supply to the southern regions of Ukraine.

Among the other projects under development is the Kakhovka-Primorska-Dnistrovska-Khmelnitsky transmission project, which involves the construction of over 800 km of 750 kV lines. The project is expected to improve power supply to the southern regions of Ukraine and enhance the country’s power export potential. The project is scheduled for completion after 2018. Projects at the 330 kV level include the 104 km, 330 kV Novoodeska-Artsyz line (by 2019), the 104 km Zapadnoukrainskaya-Bohorodchany line (by 2017) and the 223 km Lutsk Severnaya-Ternopil line (by 2019), which will improve supply reliability in the Ternopil area.

Ukrenergo is taking all the right steps to ensure the development of the country’s power sector. The recently launched development strategy indicates that the TSO is on the right track of strengthening, modernising and expanding its power transmission infrastructure to meet future demand. Further, the company’s recent efforts to achieve grid synchronisation with ENTSO-E are expected to yield larger benefits for the country’s power system as a whole. These initiatives have been strengthened by the government’s recent move to reform the power market. All these measures will ensure the creation of a secure, reliable and safe power supply system for Ukrainian consumers. 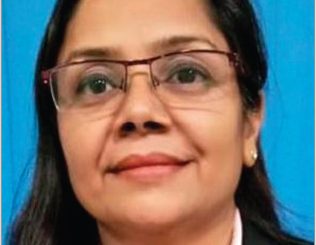