The government’s growing focus on nuclear energy is good news for Nuclear Power Corporation of India Limited (NPCIL), the sole developer and operator of nuclear power plants (NPPs) in the country. Cabinet approval for the construction of 10 indigenously developed pressurised heavy water reactors (PHWRs) with a combined capacity of 7 GW has given a major push to NPCIL’s growth plans.

Set up in 1987, the state-owned company has an operating fleet of seven NPPs aggregating 6,780 MW. The company recently commissioned the second 1,000 MW unit of the Kudankulam Nuclear Power Station (KKNPS) in Tamil Nadu in March 2017. The first unit of a similar rating was commissioned in December 2014. Together, the two units of the KKNPS make up the largest nuclear power facility in India.

NPCIL is gearing up to increase its generation capacity by nearly six times backed by the government’s ambitious plans to expand nuclear power.

Of the country’s existing fleet of 22 reactors, 16 are PHWRs that were indigenously designed by NPCIL. The reactors were based on the Canadian design of the PHWR at RAPS, built before the 1974 Pokhran nuclear test, which cut off the country from overseas nuclear trade until 2008. NPCIL has gradually increased the indigenously developed PHWRs from 220 MWe to 540 MWe and it is currently developing 700 MWe PHWRs. The performance of PHWRs has generally been free of mishaps, with the only major accident to any Indian nuclear plant being a turbine hall fire in 1993 at Narora, Uttar Pradesh.

TAPP, the company’s oldest plant that was commissioned in October 1969, has two boiling water reactors of 160 MW capacity each. Meanwhile, the newly commissioned KKNPS is equipped with Voda Voda Energo Reactors provided by Russia-based Rosatom.

Safety is  key to the operations of NPPs. To this end, NPCIL has maintained the highest safety standards at its facilities over the years through regular testing and maintenance practices. The company follows the motto “safety first”. It strives to maintain the occupational exposure of employees at various NPPs at well below the values specified by the Atomic Energy Regulatory Board. The NPPs have registered 435 reactor years of safe, reliable and accident-free operations up to March 31, 2016. In addition, NPCIL has been actively undertaking corporate social responsibility activities and conducting public awareness campaigns on the benefits of nuclear power.

NPCIL has formed joint ventures (JVs) with public sector companies in order to expedite implementation of the country’s nuclear energy programme. These include a 51:49 JV with NTPC Limited, Anushakti Vidhyut Nigam Limited, a 74:26 JV with Indian Oil Corporation Limited, and another 74:26 JV with National Aluminium Company Limited (NALCO). Discussions for forming another JV are under way with Indian Railways. However, none of the earlier JVs has implemented any project, apparently due to legislative hurdles.

NPCIL subscribed to the Nuclear Operators Liability Insurance Policy provided by the Indian Nuclear Insurance Pool through New India Assurance Company Limited in 2016-17. This was in line with the provisions relating to financial security as provided in the Civil Liability for Nuclear Damages Act, 2010. 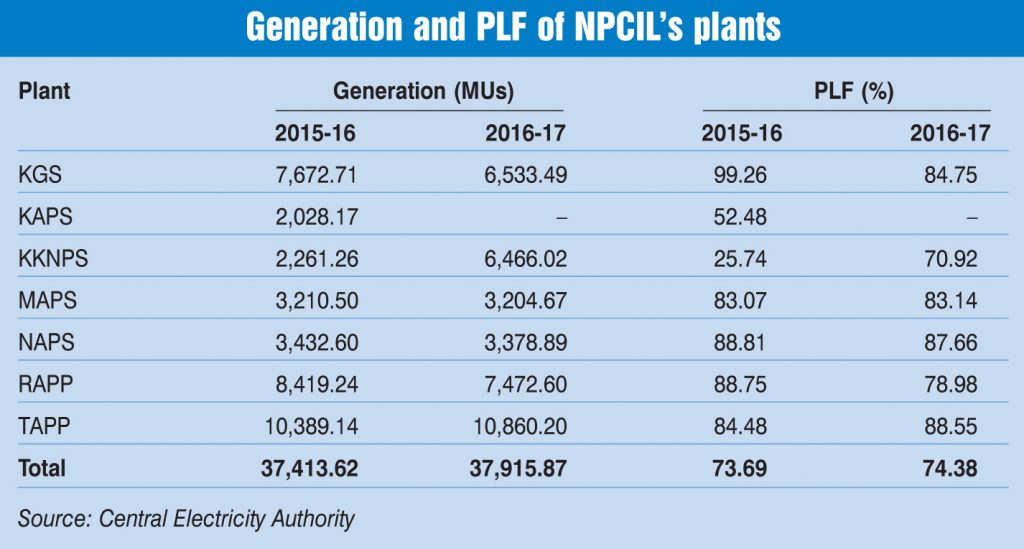 As of December 2016, the overall progress of KAPP Unit 3 stood at 84 per cent and that of Unit 4 stood at 70 per cent. In the case of RAPP, Unit 7 was 69 per cent complete and Unit 8 was 57 per cent complete. NPCIL also recently achieved the “first pour of concrete” for KNPP Unit 3, marking the commencement of construction works at the project site. The project is scheduled for completion in about six years.

In addition, the government has given financial sanction and administrative approval for KNPP Units 5 and 6 (1,000 MW each) as well as for Gorakhpur Harayana Anu Vidyut Pariyojana (GHAVP) Units 1 and 2 (700 MW each). Several other sites in the country have also received in-principle approval from the government for setting up NPPs. These include Jaitapur in Maharashtra, Chutka and Bhimpur in Madhya Pradesh, Mahi-Banswara in Rajasthan, Mithivirdi in Gujarat, Kovvada in Andhra Pradesh, Kaiga Units 5 and 6 in Karnataka, and Haripur in West Bengal. Various pre-project activities like land acquisition, environmental studies and public outreach are under way at these sites. NPCIL has already acquired land and secured environmental and coastal clearances at Jaitapur. Currently, techno-commercial discussions are in progress with Électricité de France and a general framework agreement is expected to be signed by end-2017.

10 indigenous PHWRs that were recently approved by the cabinet, are planned in Karnataka (KGS Units 5 and 6), Haryana (GHAVP Units 3 and 4), Madhya Pradesh (Chutka Units 1 and 2) and Rajasthan (Mahi-Banswara Units 1 to 4). 10 reactors aggregating 7,000 MW and entailing an investment of Rs 1,050 billion (excluding escalation and interest during construction) are scheduled to be completed by 2031. The reactors will be designed with advanced active and passive safety features including containment spray systems and passive decay heat removal systems. The equipment required for these projects will be sourced indigenously, which would give a major boost to the government’s Make in India initiative and help revive the declining order books of power equipment suppliers.

Grassroots resistance to nuclear power is a key challenge for NPCIL. Resistance by local populations and non-governmental organisations, owing to safety and environmental concerns, has indefinitely delayed several NPPs in the past. For instance, the KKNPS was delayed by almost nine years, with commissioning originally scheduled for 2007-08.

In addition, the cost competitiveness of nuclear power with regard to alternative sources of energy is declining globally. This is owing to costly safety upgrades following the Fukushima incident in 2011 that have escalated the already high capital costs of NPPs. Further, the cost of generation of renewable energy, especially solar and wind, has fallen to record low levels in recent years. Therefore, NPCIL will have to strive hard to provide power at a competitive rate. This requires avoiding cost and time overruns for all upcoming and planned projects.

Further, the financing of NPPs is a key challenge given the huge amount of investment required for setting up these projects. Although collaboration with global counterparts is an option, given the dismal financial state of international companies that have been planning to install nuclear reactors in India, this may not be guaranteed in the future. A case in point is US-based Toshiba-Westinghouse and France-based Areva, which are facing bankruptcy and seeking bailout packages from the government respectively. Going forward, NPCIL will have to look for innovative ways of securing finance for its projects.

Another issue is the availability of fuel for supporting the ambitious nuclear energy programme. Since India has insufficient uranium deposits, it almost entirely depends on imports, mainly from Russia, to fuel its existing fleet of NPPs. NPCIL needs to sign an increasing number of fuel import agreements in the future. However, the country’s inability to join the Nuclear Suppliers’ Group could restrict the possibilities for such associations.

Nevertheless, the ability of NPPs to deliver clean baseload power and India’s climate change mitigation commitments at the Paris summit will continue to drive NPCIL’s growth in the coming years. 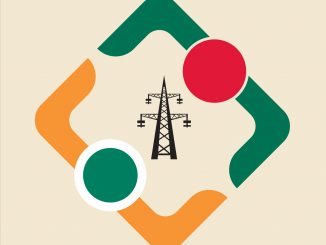 June 14, 2017
As investment opportunities in India’s  conventional power segment dry up, a growing number of power companies are [...]
More 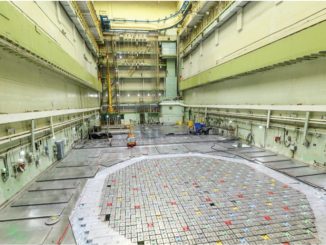 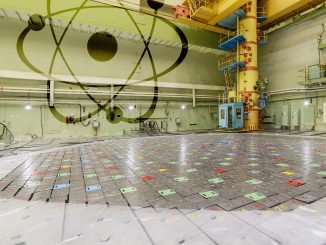 May 19, 2017
In a significant development in India’s nuclear power sector, the Union Cabinet has approved the construction of [...]
More