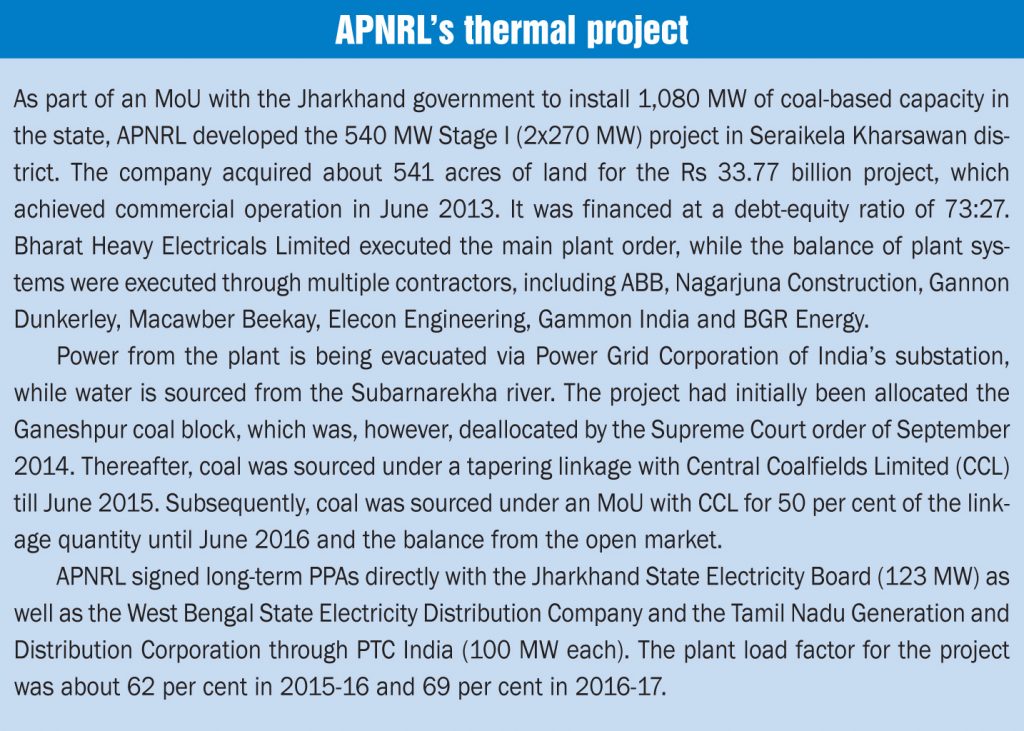 In a significant move in the infrastructure space, a State Bank of India (SBI)-led consortium of banks has closed the first successful sale under the strategic debt restructuring (SDR) scheme. This was achieved with the Edelweiss Asset Reconstruction Company (ARC) concluding the purchase of a majority stake in Adhunik Power and Natural Resources Limited (APNRL) from the banks.

According to Siby Antony, managing director and chief executive officer, Edelweiss ARC, the company is open to buying other stressed assets that have firm power purchase agreements (PPAs). He believes that the distressed assets market will mature soon. “Once the sellers of non-performing assets (NPAs) adjust to the right pricing of assets, the business of investing in distressed assets will become more mature and there will be substantial interest among serious investors. Edelweiss is poised to be a serious and significant player in this space.”

In the latest deal, the majority of the 24-member lender consortium sold APNRL’s debt worth Rs 31.16 billion for Rs 28 billion under the 15:85 structure. This includes 15 per cent or Rs 4.2 billion as upfront cash payment to the lenders and 85 per cent or Rs 23.8 billion in the form of security receipts, to be paid over five to seven years. This will be the first time that lenders will receive cash upfront on the sale of distressed assets. Edelweiss also bid for 35 per cent equity stake for Rs 500 million. With this, Edelweiss holds 51 per cent stake in Adhunik Power, two private equity firms – SBI Macquarie and IDFC Private Equity – hold 25 per cent stake, and the original promoters hold 24 per cent.

In June 2017, Edelweiss ARC emerged as the sole bidder in the Swiss Challenge method, which is one of the recommended methods for selling stressed assets under the Reserve Bank of India (RBI) guidelines notified in September 2016. Other interested bidders included SREI Infrastructure and OPG Power Ventures, which backed out subsequently as they expected the banks to take a haircut. Edelweiss ARC’s proposal did not involve any haircut, and hence was preferred by the bankers. In March 2016, SBI Capital Markets, on behalf of the SBI-led consortium, had invited expressions of interest for a 51 per cent stake sale in APNRL. In January 2017, the consortium received bids from various ARCs and by March 2017, the majority of the lenders in the consortium had agreed to seal the deal with Edelweiss ARC. However, to improve transparency and get the best price, the lenders decided to use the Swiss Challenge auction method.

Edelweiss ARC’s bid was accepted by 66 per cent of the lenders (by value) at the joint lenders’ forum (JLF). JLFs are committees comprising all consortium lenders, formed to tackle stressed loans through a corrective action plan (CAP). In fact, the recent RBI directive of May 5, 2017, lowering the threshold for implementing the CAP from 75 per cent to 60 per cent of the lenders (by value), has helped the consortium to close the deal.

The consortium had initiated a CAP under the JLF in November 2014, since APNRL had delayed repayment by more than 60 days. In December 2015, the lenders decided to convert a large portion of their debt into equity using RBI’s SDR scheme, following which the consortium acquired 51 per cent stake in APNRL. According to the February 2016 revision of SDR norms, once debt is converted into equity, banks must sell at least 26 per cent of the equity to a buyer within 18 months as opposed to 51 per cent stake earlier. The remaining stake could be sold by the banks gradually.

The SDR scheme has so far not been very effective in resolving the issue of stressed accounts for banks as they have not been able to find buyers for these assets. Lenders, however, continue to use SDR as it allows an extension on the provisioning requirements related to these assets. The latest stake sale gives some hope for selling more such assets as required under the SDR norms.