Water plays a crucial role in ensuring smooth operations of a thermal power plant (TPP). It is typically used at a plant for cooling tower make-up, ash disposal, demineralising (DM) water make-up, etc. In the recent past, the availability of water has been a key concern for power developers. Competing uses, limited supplies as well as shortages in various parts of the country have resulted in a shortage of water for power generation. The shut-down of TPPs owing to water shortage has been increasing year on year. Around 21 thermal power units have had to shut down during 2016-17 as against 15 in 2015-16. Taking cognisance of the scenario, it has become imperative to undertake water management measures to minimise consumption through judicious use and reuse of wastewater wherever possible.

One of the key policy measures for promoting water management at TPPs was the tightening of water consumption standards by the Ministry of Environment, Forest and Climate Change in December 2015. As per the revised norms, the existing plants are required to achieve a specific water consumption of 3.5 cubic metres per MWh by December 2017. Further, plants deploying the once-through cooling mechanism are required to install a cooling tower. Meanwhile, all plants being set up after January 2017 need to operate at a water consumption level of 2.5 cubic metres per MWh and achieve zero discharge.

Another policy push for water management at TPPs was the mandate under the amended tariff policy of 2016 to use treated sewage water at plants located within a radius of 50 km from a sewage treatment plant (STP). Significant progress has been made on this front. The government has completed the mapping of power stations that are within a 50 km radius of STPs across the country. Besides, thermal power major NTPC Limited has identified five coal-based plants at Solapur, Mouda, Meja, Dadri and the upcoming Patratu TPP for using treated sewage water to meet the make-up water requirement. The company is in talks with the respective municipalities for the same. Apart from this, Maharashtra State Power Generation Company Limited has entered into a long-term contract with the Nagpur Municipal Corporation for the supply of treated sewage water at the Koradi TPP.

One unit of electricity generated from a coal-based plant requires around three litres of water. At the current level of power generation of around 950 BUs, nearly 2,800 million cubic metres per annum (around 7,700 million litres per day [mld]) of water is required. With the country’s power demand growing at a rate of 6 per cent per annum, the coal-based installed capacity is estimated to reach 277 GW by end-2027. This is expected to increase the water requirement of thermal plants to about 12,000 mld. Unfortunately, with the existing TPPs facing operational hurdles owing to water shortage, water availability is likely to be one of the biggest challenges for new TPPs.

The most important use of water in a TPP is as a coolant in a cooling system. Around 85 per cent heat is discharged through cooling water in a condenser.

Typically, three types of cooling systems are used in TPPs. These are the once-through cooling, evaporative cooling and dry cooling systems. Each of these systems has its own merits and demerits. The once-through cooling system involves the direct method of cooling, wherein water is withdrawn from the source (river or ocean) and returned to the same source after heat rejection. It provides high plant efficiency, but requires large quantities of water and has an adverse impact on the environment. The evaporative cooling system is based on the indirect closed loop method of cooling and results in the second best plant efficiency. However, it also entails higher water consumption to make up for the loss due to evaporation, drift and blowdown. Besides, the performance of evaporative cooling is affected by ambient temperature and humidity. In the dry cooling system, power cycle waste heat is released from the condenser into the atmosphere by air cooling. Low water requirement is the key benefit of this system. The water requirement in dry cooling towers is one-tenth of that in wet cooling towers. However, it increases the cost of power generation, resulting in a tariff increase of 8-9 per cent. This type of cooling system is mostly deployed in water-scarce areas.

An important step for ensuring water conservation in the cooling system is increasing the cycle of concentration (CoC) of cooling water. The CoC is the ratio of dissolved solids in the circulating water to that in the make-up water. Some amount of water is taken out of the cooling system as blowdown to reduce the salt concentration and fresh make-up water is added to take care of evaporation, drift and blowdown water loss. The higher the CoC, the lower is the make-up water and blowdown water requirement. 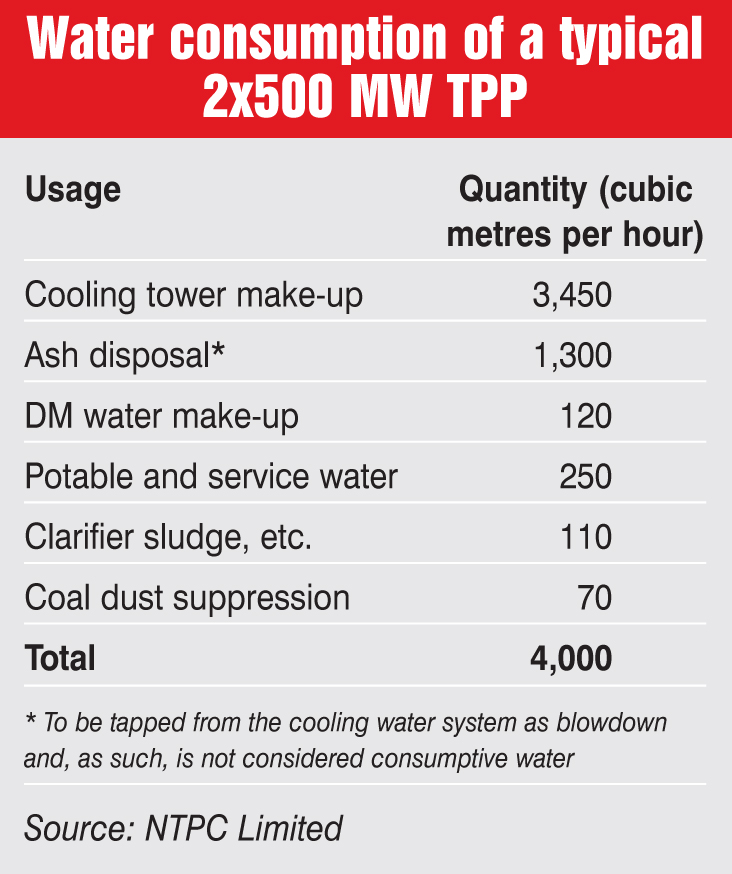 Wastewater treatment is an important component of water management in a power plant. In order to operate a zero liquid discharge power plant, it is essential to monitor effluent streams, conduct regular water audits, undertake process change to minimise effluent generation at the existing treatment plants, and reuse wastewater wherever required.

An effluent treatment plant is crucial for wastewater management in a TPP. It is designed for treating the cooling tower blowdown and the neutralised regeneration wastes from denim and condensate polishing units, making it reusable. The effluent treatment process broadly entails precipitating hardness and silica in reactor clarifiers with chemicals such as lime, soda ash or dolomite. It also involves the deployment of a high recovery plant using ultrafiltration and reverse osmosis (RO) membranes to achieve over 90 per cent reusable water for cooling tower make-up and evaporator or crystalliser followed by centrifuge for separating solids in the RO brine. Apart from setting up an effluent treatment plant, it is important to undertake process changes at the TPP to reuse waste streams with minimal or no treatment. This not only optimises the effluent treatment plant capacity but also  the capital and operating costs.

In sum, given the stringent water consumption norms and growing water shortages, developing more sustainable practices and adopting new water conservation technologies at TPPs has become critical. Although there are several water conservation technologies available, it is important to select the one best suited for the plant, considering parameters such as water source and the age of the plant. Undertaking proper water management at TPPs is essential to ensure the vitality of thermal power generation in the coming years, which continues to be the chief source of power generation in the country.

Water has several end-uses in a power plant. Since it has the highest specific heat rate amongst all fluids, water is ideal as a coolant for various processes. Besides, it is widely used in ash handling systems. With […]

Among the industrial consumers of water, thermal power plants (TPPs) are the largest ones. It is estimated that TPPs account for nearly 88 per cent of industrial water consumption in the country. Moreover, 48 per […]

The thermal power industry is the largest contributor (80 per cent) of wastewater discharge. The treatment and disposal of wastewater is crucial as it eventually gets mixed with groundwater or surface water, thus affecting the […]