The thermal power generation segment has been facing hard times over the past few years. Pointing to the poor project pipeline in the segment, a Central Electricity Authority (CEA) report notes that no coal-based capacity addition is required over the next five years considering the capacity already under construction. Further, the decline in electricity demand has  resulted in low plant load factors for existing plants, reducing the need for immediate investments in the thermal power generation segment. This has also slowed down the market for boilers, turbines and generators (BTGs). Nevertheless, the new emission norms finalised by the environment ministry have given a positive push to the BTG industry. The new norms are expected to increased focus on the installation of more efficient and environment-friendly technologies, and phasing out of older plants, thereby creating significant market opportunities.

Power Line takes a look at the key trends in the BTG indu   stry, the ordering scenario, recent developments, issues and challenges, the impact of the new emission norms, and the future outlook… 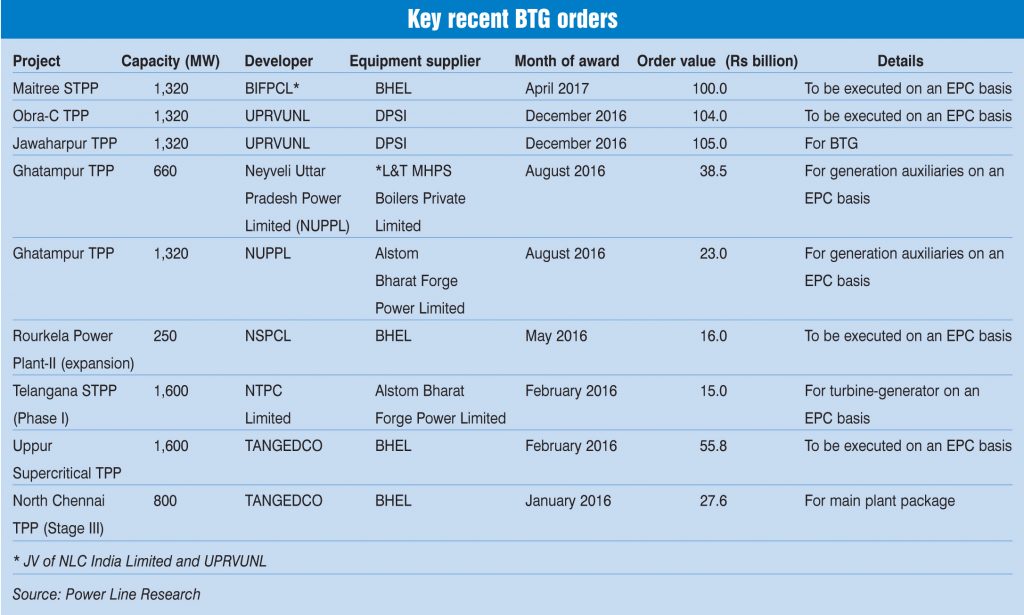 The overall manufacturing capacity of the domestic BTG industry is estimated be over 30 GW. The country’s largest equipment supplier Bharat Heavy Electricals Limited (BHEL) continues to hold the majority share in the market in terms of manufacturing capacity of power generation equipment at about 20,000 MW per annum, as well as in terms of total installed capacity, with BHEL accounting for more than 50 per cent. Other key players in the market include L&T-MHPS Boilers Private Limited (with a capacity of 4,000 MW), Doosan Power Systems India (3,000 MW), and Thermax-Babcock & Wilcox Energy Solutions (3,000 MW).

In January 2017, the CEA issued a new advisory for central and state thermal power generating companies for sourcing of supercritical units from indigenous manufacturers. Earlier, in 2010, the CEA had issued an advisory to incorporate the condition of setting up indigenous manufacturing facilities for foreign suppliers to ensure the transfer of technology and augmentation of domestic manufacturing capacity. The advisory was initially issued for a period of three years and later extended till October 2015. In a shot in the arm for domestic equipment providers, the advisory has now been extended till October 2018. The advisory is applicable only to central and state generating utilities and private sector firms are free to choose from the BTG suppliers. However, it is expected to have a positive impact on equipment providers given that most fresh equipment orders are expected to come from these companies.

In addition, the CEA has removed the clause that requires bidders to furnish a deed of joint undertaking (DJU) provided certain criteria mentioned in the advisory are met. Changes in the DJU clause are also expected to benefit equipment manufacturers. Under the DJU clause, the domestic manufacturer had to furnish a guarantee from one of the collaborators, and in order to provide guarantees, collaborators had been taking a higher share of the orders, thus impacting the gross margins of BTG manufacturers. 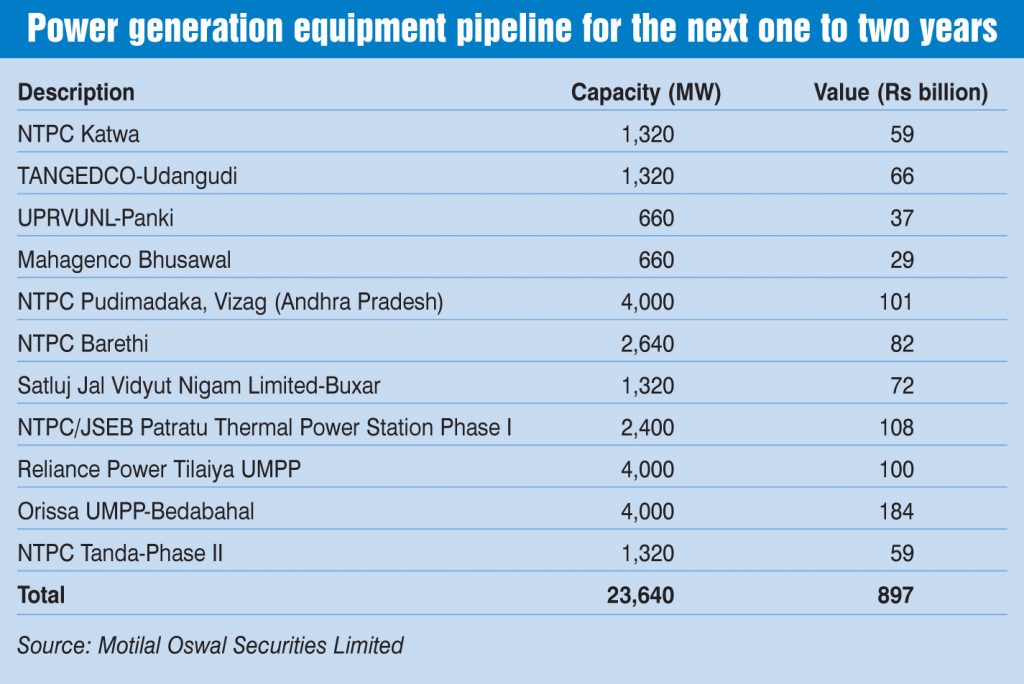 The ordering activity has continued to remain weak due to delays in clearances and the fast depleting project pipeline. Since January 2016, main plant equipment (BTG) orders aggregating 10,000 MW have been finalised, on a standalone as well as an engineering, procurement and construction (EPC) basis. Similar to the previous year trends, the orders came from the central and state sector companies and no orders were finalised by the private sector during this period. Technology-wise, the majority of these orders were for supercritical and ultra supercritical technologies with a unit size of 660 MW and 800 MW respectively. However, there has been a growing uptake of environment-friendly designs.

Based on orders tracked by Power Line, BHEL received the highest orders for about 4,000 MW of capacity. These include a Rs 100 billion contract from Bangladesh India Friendship Power Company Private Limited (BIFPCL) for the execution of the 1,320 MW Maitree STPP in Bangladesh on an EPC basis; two orders aggregating Rs 83.4 billion from Tamil Nadu Generation and Distribution Corporation (TANGEDCO) for the supply of the main plant package for the 1,600 MW Uppur super thermal power plant (STPP) and the 800 MW North Chennai thermal power plant (TPP) for Rs 55.8 billion and Rs 27.6 billion respectively; and a Rs 16 billion order from NTPC-SAIL Power Company Limited (NSPCL) for setting up a 250 MW unit at the Rourkela TPP Stage III. Other major orders awarded included two contracts of over Rs 100 billion each from Uttar Pradesh Rajya Vidyut Utpadan Nigam Limited (UPRVUNL) to Doosan Power Systems India (DPSI) for the main plant equipment of its Obra-C TPP and Jawaharpur TPP of 1,320 MW each. 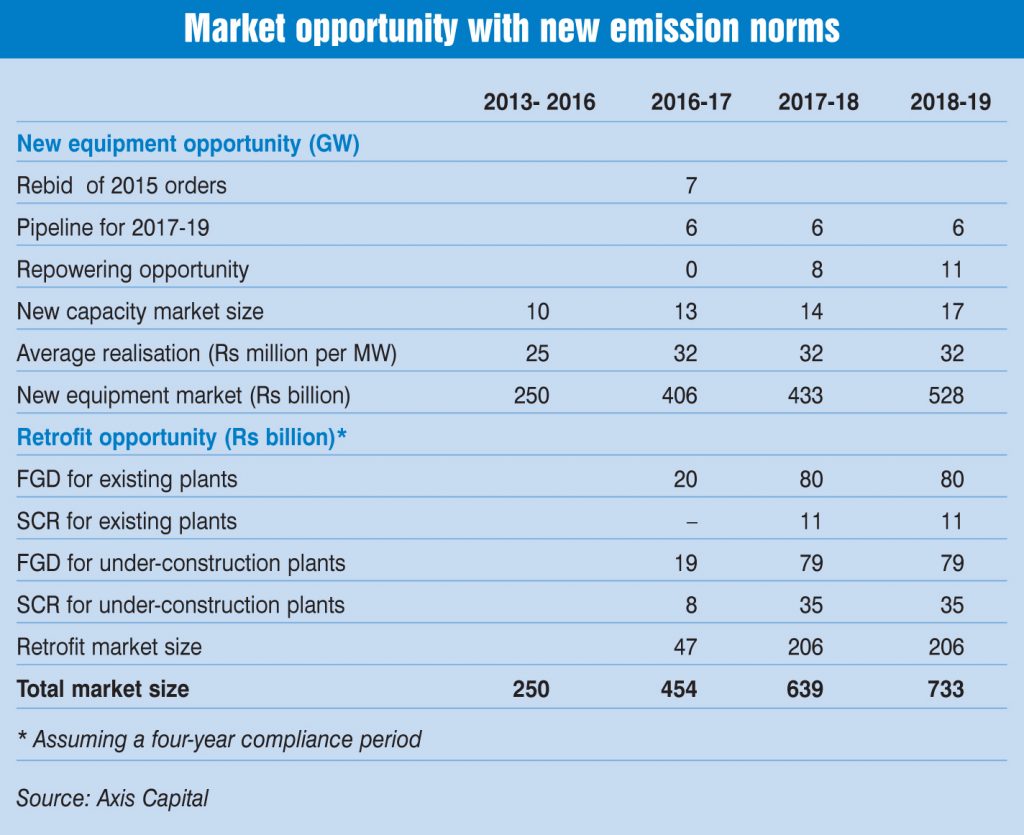 To comply with the tightened emission norms, developers need to modify the operations of BTGs either by scrapping the old plants to set up a new higher capacity supercritical plant or by retrofitting the existing BTG with the emission control equipment. This would create a huge market for BTG manufacturers.

As per the CEA’s study on old (over 25 years) inefficient power plants aggregating 33 GW in the central and state sector, around 7 GW of power plants could be scrapped and replaced with around 18 GW of supercritical units. By scrapping the existing plants and setting up new supercritical plants at the site, the generation capacity is expected to double given that such plants can use the existing infrastructure such as rail linkage, water and transmission lines. Further, new supercritical plants are expected to offer better plant efficiency, due to superior technology and lower coal consumption, thus reducing the cost of power generation.

Further, new units will significantly increase ordering levels. According to a report by Axis Capital, of the 51 GW of capacity with unit size of over 500 MW installed before 2003, around 35 GW (mainly plants more than 25 years old) needs to be scrapped. Further, it estimates that the scrapped plants (approximately 35 GW) would come up with around 50 per cent higher capacity over the next four to five years, resulting in new capacity of around 50 GW, in addition to the existing pipeline of around 20 GW. “With this, the BTG order volumes are expected to rise to around 15 GW per annum from 8-10 GW per annum,” says the report. Further, there is likely to be an improvement in cost realisation due to higher costs involved in meeting the norms. Overall, the rise in volumes coupled with increasing realisation is expected to expand the size of the BTG market to around Rs 530 billion per annum by 2019.

Another option for meeting the emission targets is to retrofit the existing plants with the equipment required to meet the stipulated emission targets. To comply with SOx norms, all existing plants of unit size equal to or more than 500 MW (102 GW) will have to install Flue-gas desulphurisation (FGD) by incurring a capex of Rs 4.5 million per MW. Further, all under-construction plants of around 53 GW (to be installed 2017 onwards) have to install both FGD and selective catalytic reduction (SCR) systems to meet the revised emission norms. Overall, a market opportunity of around Rs 800 billion is pegged for retrofitting existing/under-construction plants to meet new norms. 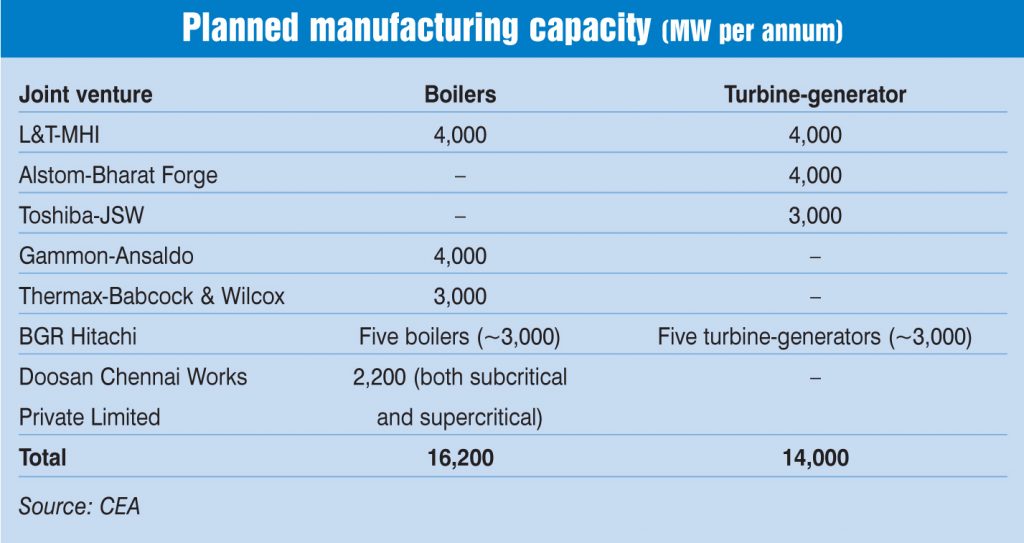 The slowdown in thermal capacity addition can be attributed to the subdued ordering status in the power sector. Although state and central utilities are setting up new TPPs, private sector investments have been low. According to industry analysts, the private sector’s participation is expected to remain subdued owing to low power demand and the lack of power purchase agreements. Further, the government’s focus has shifted to renewable energy. In the past, the domestic BTG industry has faced intense competition from Chinese players, even with high import duty applicable on imported goods. As per CRISIL Limited estimates, almost 29 per cent of the BTG orders placed during the Twelfth Plan period were awarded to Chinese equipment suppliers. However, the government has now abolished the import of capital goods under the Export Promotion Capital Goods scheme to protect the domestic BTG industry from rising competition from Chinese players.

On the whole, boiler manufacturers are facing low capacity utilisation due to a lack of fresh orders. Despite the dismal generation scenario, the market for BTG is likely to improve with the replacement of old inefficient units with supercritical units, growing power demand with the successful implementation of the Ujwal Discom Assurance Yojana, and the government’s push to install various emission reduction technologies.