Despite the growing shift towards renewable sources of energy, India will continue to rely on coal-based power in the near future. This will have serious implications with regard to the increased green house gas (GHG) emissions as thermal power plants account for about 50 per cent of emissions. As per Central Electricity Authority (CEA) estimates, carbon dioxide emissions from grid-connected power stations stood at around 846.2 million tonnes in 2015-16, as compared to 805.4 million tonnes in 2014-15.

In the past decade, there has been growing focus on the use of clean coal technology (CCT) with higher operational efficiency and lower fuel consumption and hence lower carbon emissions. The uptake of such technologies is expected to gain momentum as gencos strive to meet stringent environmental regulations.

Power Line takes a look at the progress and uptake of boiler, turbine and generator technologies for clean power generation…

Supercritical units are designed with higher steam parameters of 247 kg per square centimetre, 565/593ºC. Therefore, the efficiency of such units is about 2-3 per cent higher than that of existing 500 MW subcritical units. Several Indian and global players have manufactured products based on the supercritical technology. Currently, 44 supercritical units of 660/800 MW each with an aggregate capacity of 39,710 MW have been commissioned and 48,060 MW capacity is under construction. In order to help state utilities and independent power producers replace old inefficient coal-based plants with supercritical units, the government has formulated a policy for automatic transfer of coal linkages to proposed supercritical units.

Ultra-supercritical (USC) technology was initially adopted in Europe and Japan. USC plants operate at a higher temperature of 600ºC and at an efficiency level of up to 44 per cent, which is 3-4 per cent higher than a supercritical unit. The technology requires lesser coal consumption and reduces carbon emissions by 0.7 kg per kWh. However, due to high temperature, USC units are more sensitive to feed-water quality and entail high maintenance costs as higher thermal stress and fatigue can possibly occur in the boiler section of such a unit.

Indigenous research for the development of advanced-ultra supercritical (A-USC) technology is being carried out in India. A consortium of three government entities, Bharat Heavy Electricals Limited (BHEL), NTPC Limited and Indira Gandhi Centre for Atomic Research (IGCAR) have signed an MoU for the development of 800 MW A-USC indigenous demonstration plant  with main steam pressure of 310 kg per square centimetre and temperature of 710/720ºC. The move is expected to result in an efficiency improvement of about 10 per cent compared to supercritical technology. The total project cost is estimated at Rs 15.54 billion, out of which Rs 2.70 billion will be contributed by BHEL, Rs 0.50 billion by NTPC, Rs 2.34 billion by IGCAR, Rs 1 billion from the Department of Science and Technology and the remaining amount of Rs 9 billion will be granted by the Department of Heavy Industry. The use of A-USC technology in coal fired plants is expected to reduce carbon emissions by 20 per cent as compared to subcritical plants and increase the plant’s life expectancy through material development. 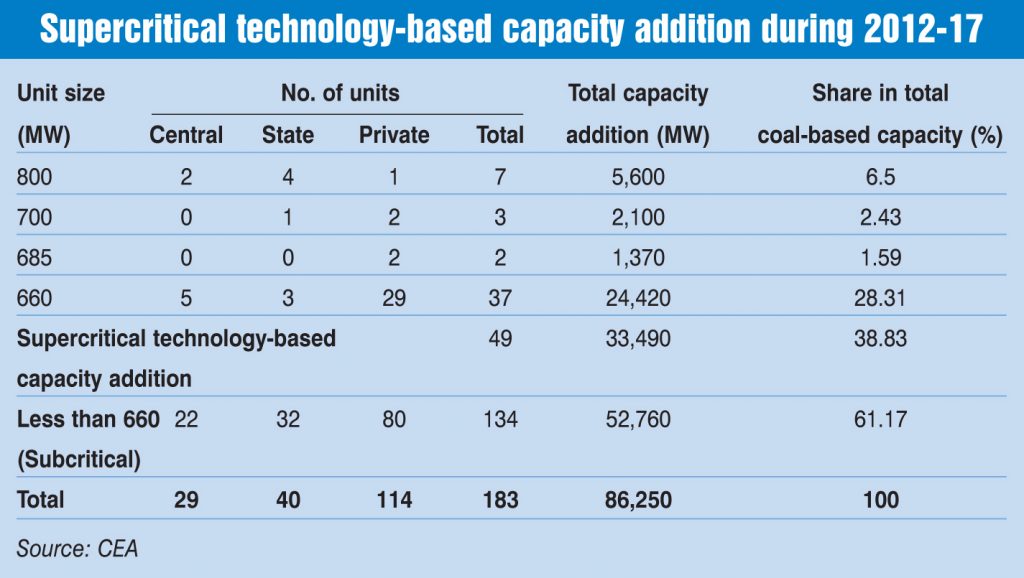 Integrated gasification combined cycle (IGCC) is the emerging hybrid gas-fired power technology since it uses a combination of coal gasification and combined cycle technology to produce electricity in a clean and efficient manner. It integrates gasifier, gas turbine and steam turbine in a combined cycle mode where coal is gasified with either air or oxygen to fire syngas into the gas turbine. The technology is capable of effectively capturing feedstock’s carbon inventory from syngas, before it is combusted in the gas turbine. Thus, it can operate at higher efficiency and lower emissions as compared to conventional pulverised coal fired power plants. IGCC facilitates reduction in the cost of cleanup technologies, lowers water consumption and decreases incremental cost of carbon capture.

The technology has so far been adopted only in the US, the Netherlands and Spain. In India, BHEL and NTPC Limited have jointly set up a 6.2 MW IGCC-based demonstration project at Trichy. The technology has the potential to provide an economically viable option for carbon capture but it is not entirely suited for Indian coal, which has high fly ash content. Further, NTPC has proposed the setting up of a 100 MW demonstration plant in Uttar Pradesh, adapting the IGCC technology to suit the Indian conditions.

However, there are major bottlenecks in the widespread adoption of IGCC technology. These include cost, availability, complexity and uncertainty regarding its operational track record. The technology also provides opportunities for new product areas along with electricity generation like liquid fuel generation, hydrogen production, pre-combustion CO2 capture and fuel cell integration, which may provide future options for zero emission coal technologies with higher efficiency. Technological advancements are constantly being made with respect to syngas cleaning at higher temperature. 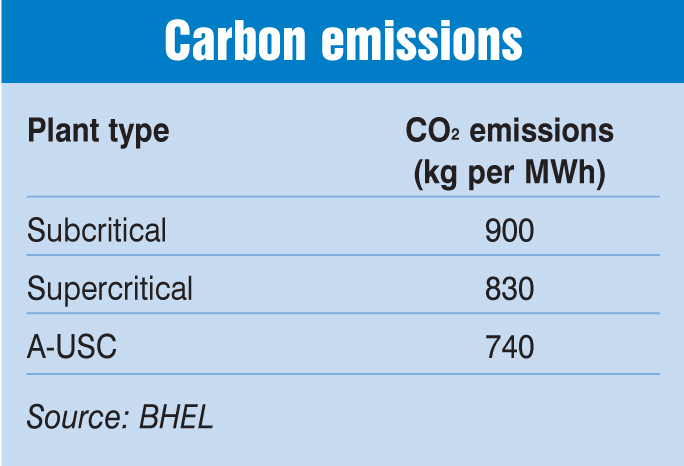 Fluidised bed combustion (FBC) refers to a method of burning a wide variety of coal and other low-grade fuels such as lignite, biomass, bagasse and coal washery waste. There are two variants of FBC boilers: circulating fluidised bed combustion (CFBC) and pressurised fluidised bed combustion (PFBC). CFBC boilers offer flexibility in terms of the quality of fuels along with reduction in SO2 and NOX emissions due to lower operating flue gas temperatures. As compared to clean coal technologies, CFBC is relativity a more reliable technology and economical to maintain. In India, the largest operational CFBC boiler commissioned by BHEL unit has a capacity of 250 MW and uses lignite as the primary fuel. Therefore, going forward there would be greater focus on the scaling up of CFBC units.

The uptake of CBFC boilers is driven by its ability to use inferior quality fuels in an environment friendly manner, thereby eliminating the need to use complicated flue gas treatment facilities. Localisation of the technology is also easier since CBFC is considered to have plant efficiency similar to that of pulverised coal plants and can be manufactured in the same facilities that manufacture conventional boilers. The success of the technology will largely depend upon the maturity of fluidised bed gasification technology for high ash coal.

Carbon capture and storage (CCS) is an important technology to achieve the 2ºC pathway set by the global community. It is an emerging approach, which can significantly mitigate GHG emissions by capturing carbon dioxide from large point sources and transporting it to an underground storage site rather than releasing it into the atmosphere. CCS is capable of addressing emissions from a wide range of power and industrial processes.

Globally, there are around 15 operational large-scale CCS projects with six more projects under construction. Around 100 small-scale projects are also in the pipeline. The lack of momentum in CCS deployment can lead to asset stranding of coal-fired plants at a much larger scale by 2050. However, financial support and policy certainty are crucial for catalysing this technology. To this end, BHEL has collaborated with TREC-STEP (Tiruchirapalli Regional Engineering College Science and Technology Entrepreneurs Park), as a part of a three-year European Union funded project. However, the deployment of CCS technology would face certain impediments such as technical feasibility, cost and risk of slow/ accidental leakage.

Clean coal technologies are continuously evolving in the country and will have a pivotal role to play in India’s commitment to the Paris agreement. These technologies will offer a middle ground to India to meet its energy demand requirement and emission targets. Even though the progress so far has been slow, India’s energy policies have been on the right track to ensure a wider adoption of such technologies. While supercritical and CBFC are well-established technologies, there is still a long road ahead for the deployment of A-USC, IGCC and CCS technologies, which will be dependent on the financial support from the government.