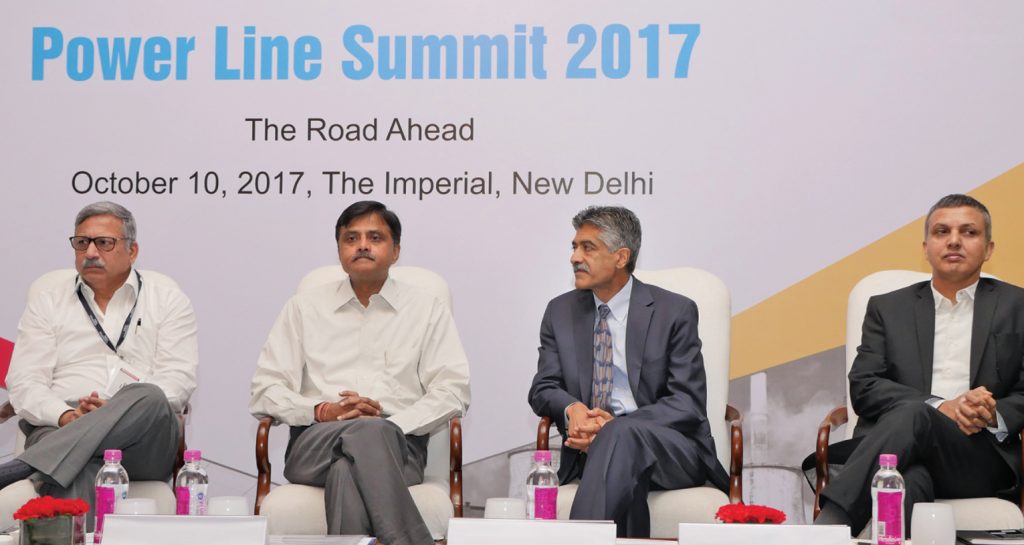 The second edition of the Power Line Summit was held on October 10, 2017 at The Imperial in New Delhi. The objective of the summit was to provide a top-level view of the road ahead for the Indian power sector, and highlight the most pressing issues and opportunities. The summit brought together stellar speakers and key industry stakeholders, including senior ministry officials, regulators, developers, utilities, technology providers and financiers. The event was attended by close to 100 delegates and included a series of presentations and panel discussions on future strategies for the power sector. In this section, we present a summary of the proceedings from the key sessions at Power Line Summit 2017.

It is estimated that about 40 million households in the country still do not have access to electricity. The first priority of the government is to make available 24×7 affordable and reliable power supply. To this end, solar and wind power are the key emerging options. The government has set a target of 175 GW of renewable energy capacity by 2022 and is committed to have 40 per cent of the installed capacity from non-fossil fuel sources by 2030. Further, solar and wind tariffs have come down to Rs 2.50 and

Rs 2.60 per unit respectively, raising doubts about the sustainability of coal plants. However, the continuing high share of coal (about 70 per cent) in the country’s energy mix makes it the most important source for power generation.

Meanwhile, the plant load factors (PLFs) of coal-fired plants have come down significantly, with a national average of 58-60 per cent. PLFs vary greatly from sector to sector. While central sector plants have higher-than-average PLFs, state and private sector plants have much lower PLFs. This is partly because of the increase in overall capacity and partly because of the increase in renewable-based energy, which is placed higher in the merit order. Till two years ago, the country was in a power-shortage situation. Hence, most of the plants were used at maximum capacity. Now, with enough capacity in the system to meet peak demand, some plants are required to operate at partial load during periods of low demand. This is a very normal thing in any developed country and is a happy situation. As the share of renewable energy increases, coal will increasingly play the role of balancing and stand-by power. With relatively lower PLFs, more flexibility is needed in power plants. This will involve significant investment and the adoption of methodologies and technologies to operate the plants efficiently even at lower PLFs.

With the increase in renewable energy generation, there is no doubt that coal plants will have to be operated at partial loads. The Central Electricity Regulatory Commission has already brought the allowable PLF down to 55 per cent. Sometimes an entire station needs to be shut down and then restarted. This involves huge costs and also affects the performance of the plants adversely. To reduce costs, one of the strategies being adopted is to use pithead plants for meeting baseload demand. Also, a number of technologies are available that can be applied to both boiler and steam turbines, as well as digital technologies and predictive technologies that can help mitigate the detrimental effects of flexible operations. However, the technologies are not yet firmed up. It is not a one-size-fits-all case and the installed base of coal plants need to be analysed holistically. To this end, the experience of countries like the US, Japan and some European countries that have already adopted a number of technologies is being used as a reference. While the cost of flexibilisation in terms of additional capital investment and operations and maintenance (O&M) costs would depend on the technology used, the average cost implication of installing such technologies is estimated to be not more than 10 per cent. Further, the technologies are expected to continue to mature in terms of meeting the flexibilisation requirements, resulting in a decline in costs.

Moreover, flexibilisation and investment requirements in coal-based plants as a result of the increase in the share of renewables should be accounted for in the cost of renewable power and not coal-based power. Although solar and wind appear to be very cheap with the decline in tariffs, they have high grid balancing costs associated with them. The cost of balancing renewable power is currently estimated to be in the range of Rs 3-Rs 4 per unit. So, if we take the net cost of renewable energy to the grid, it would be in the range of Rs 5-Rs 6 per unit, or even more. Moreover, the per unit cost of transmission of renewable-based power is pretty high because of the redundancy or the low utilisation factor of transmission infrastructure. The real cost of delivering renewable energy to homes needs to be calculated along with storage, transmission and infrastructure costs.

The situation in the power market is highly volatile. Recently, the rates at the power exchange varied from Rs 2.50 per unit to as much as Rs 9 per unit. This shows that the power market is very shallow and a little bit of fluctuation can cause a lot of disruption. The coal scenario is also not in a good state. While only three plants were on the list of plants with supercritical coal stock a year back, around 23 plants are in the supercritical state today. That also shows that the surplus coal scenario is also an illusion. Further, only one part of the power value chain has been liberalised, that is, generation. Not much has been done on the upstream side, that is, coal. Even on the downstream side, the distribution woes continue to exist. So, there is a need to reform the entire value chain in order to reap the real benefits.

Another challenge is being posed by the new environmental norms. While the commitment to meet those norms is unquestionable, it is not possible to take up upgradation for all plants simultaneously since upgradation requires a shutdown of three to six months. Hence, it has to be done in a phased manner such that no more than 10,000 MW to 15,000 MW is under shutdown at any given point of time. To this end, the CEA, in consultation with the regional power committees, has drawn up an implementation plan for pollution control technologies, keeping in view the demand-supply situation in each region over the next five years. The plan is being reworked to achieve the new norms at the earliest possible. The implementation will be cost-neutral for generators. The initial cost of implementation, estimated to be Rs 3 million to Rs 6 million per MW, will be a pass-through in tariffs in most cases. This, however, will lead to an increase in the tariff for consumers by 25-35 paise per unit. Another key issue is the retirement of capacity. A number of factors such as the age of the plant, the average consumption of coal by the plant, the demand-supply situation in that particular area and the position of the lending banks need to be taken into account, which makes it a complex decision.

Despite all the capacity addition planned in the renewable sector, coal is expected to continue to be the mainstay to meet the growing energy needs, with over 60 per cent share in power generation. Capacity of approximately 40,000 MW to 50,000 MW is under construction and is expected to come online by 2022. Apart from the under-construction capacity, the focus is also on increased utilisation of the existing capacity and an assessment of capacity requirements after 2022. However, the dynamic technological environment is preventing the government and developers from taking any long-term calls. At the same time, there are some ultra mega power projects in the pipeline that can be initiated to bring in more capacity when required.

Going ahead, more consolidation would be needed due to the stressed condition of various small developers, and it will happen over time. Meanwhile, more clarity on the tariff mechanism is required for the desired implementation of the new environmental norms.

Captive power plants (CPPs) continue to be a viable option for industrial and commercial consumers to meet their energy demand and hedge against the risks of high grid power tariffs. Further, the quality of grid […]

Digitising Energy: Imperative for a robust and reliable power system

The Indian power sector has been struggling with issues such as infrastructure inadequacy, and transmission and distribution inefficiencies. There are several technical challenges in terms of manual distribution processes and lack of real-time information that […]

Telangana, which was carved out as a new state in 2014, has come a long way in the past three years. The state’s economy contributes around 4.28 per cent to the national GDP. The state […]