In one of the worst industrial disasters in India, on November 1, 2017, a blast in the boiler section of one of the units of NTPC’s Feroze Gandhi Unchahar Thermal Power Station in Uttar Pradesh claimed several lives and left many grievously injured.

The NTPC statement immediately after the accident read: “In NTPC Unchahar, Unit No. 6 at around 1530 hrs on 01.11.2017, there was a sudden abnormal sound at 20 mt elevation and there was an opening in corner No.2 from which hot flue gases and steam escaped, affecting the people working around the area… Around 80 people were rushed to NTPC hospital… In the mishap, 8 people succumbed to their injuries.”

The blast occurred in the boiler of Unit 6. The injured were immediately airlifted to Delhi while others were provided treatment at various hospitals in Delhi and Lucknow. The power minister and NTPC’s chairman and managing director (CMD) visited the power station soon after the accident.

As per news reports, Unit 6 was reportedly running at a load of 200 MW at the time of the accident. While Unit 6 has been shut down after the blast, all the other units are in operation. It is expected that Unit 6 will take at least six months to restart operations.

NTPC has begun an inquiry into the mishap and has set up a three-member internal committee headed by its senior-most executive director and two general managers. “The expert committee will rigorously examine each and every possible cause of the incident that led to the failure of the economiser section in the boiler, resulting in the exhaust of flue gases. This is an uncommon and rare failure,” NTPC stated.

While the company has declined to officially comment on the preliminary causes of the accident pending the completion of the investigation, according to news reports, the formation of coal clinkers disrupted coal supply, resulting in high fluctuation of pressure inside the boiler, which created a vent, allowing hot flue gases and steam at high temperature to escape.

NTPC’s report is expected to be released by November end. “The recommendations of the committee will be implemented not only in this unit but in all other existing and future units. We will share the findings with other power plant operators,” stated Gurdeep Singh, CMD, NTPC, at a media briefing after the accident. Multiple teams comprising experts from NTPC and Bharat Heavy Electricals Limited (BHEL), which had supplied the equipment for the unit, are also analysing the cause of the accident. 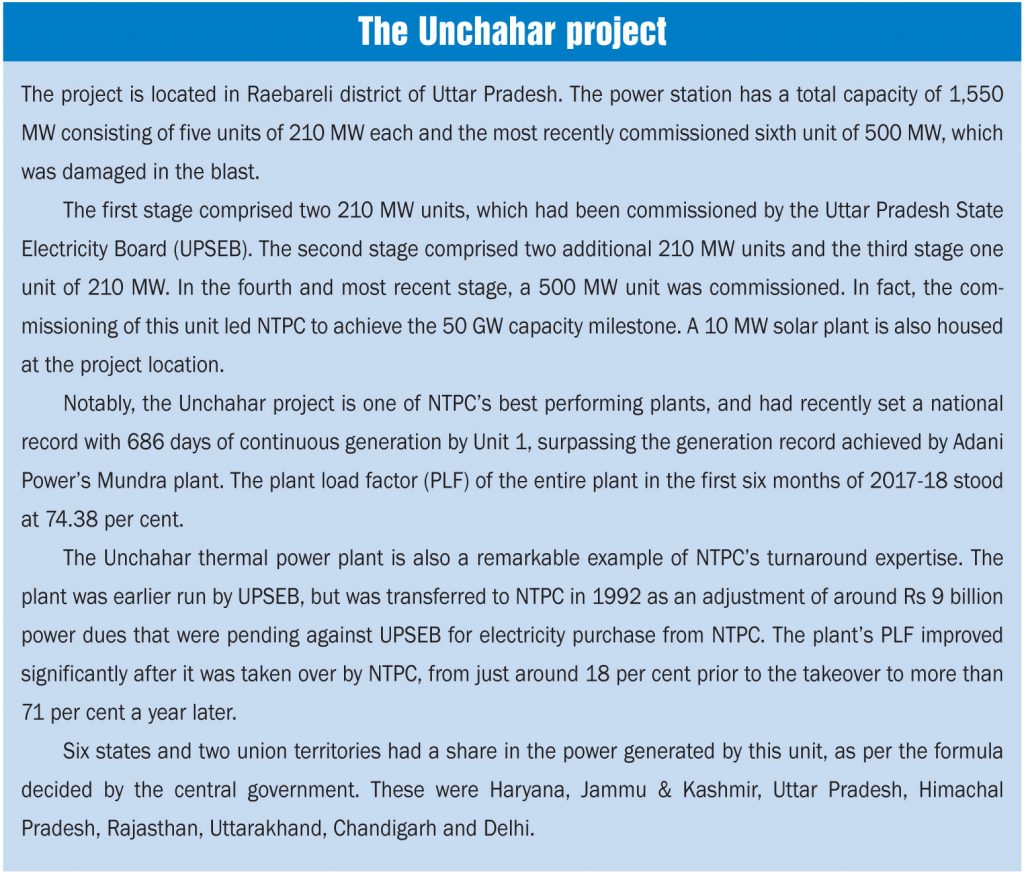 Asked whether the unit was commissioned in a hurry, Singh stated, “The project was scheduled to be commissioned in December 2016, but its commissioning was done in March 2017.” NTPC also clarified that the majority of works were not undertaken by subcontractors. In fact, NTPC officials, including AGMs, were on site overseeing the plant’s operations at the time of the accident. One of the AGMs succumbed to his injuries, while the other two were being given medical care.

Meanwhile, to aid NTPC’s investigation, the power ministry has constituted a committee with the Central Electricity Authority’s (CEA) member (thermal) as its chairman and other members comprising the CEA’s chief engineer and Uttar Pradesh Rajya Vidyut Utpadan Nigam Limited’s director (projects) and director of boilers. Besides investigating causes, the committee will suggest remedial measures to avoid a recurrence of such incidents in the future. The committee will submit its report by the first week of December, as per the power ministry. Aside from NTPC and the power ministry, the Ministry of Commerce and Industry has also constituted a committee to probe the Unchahar plant boiler blast. 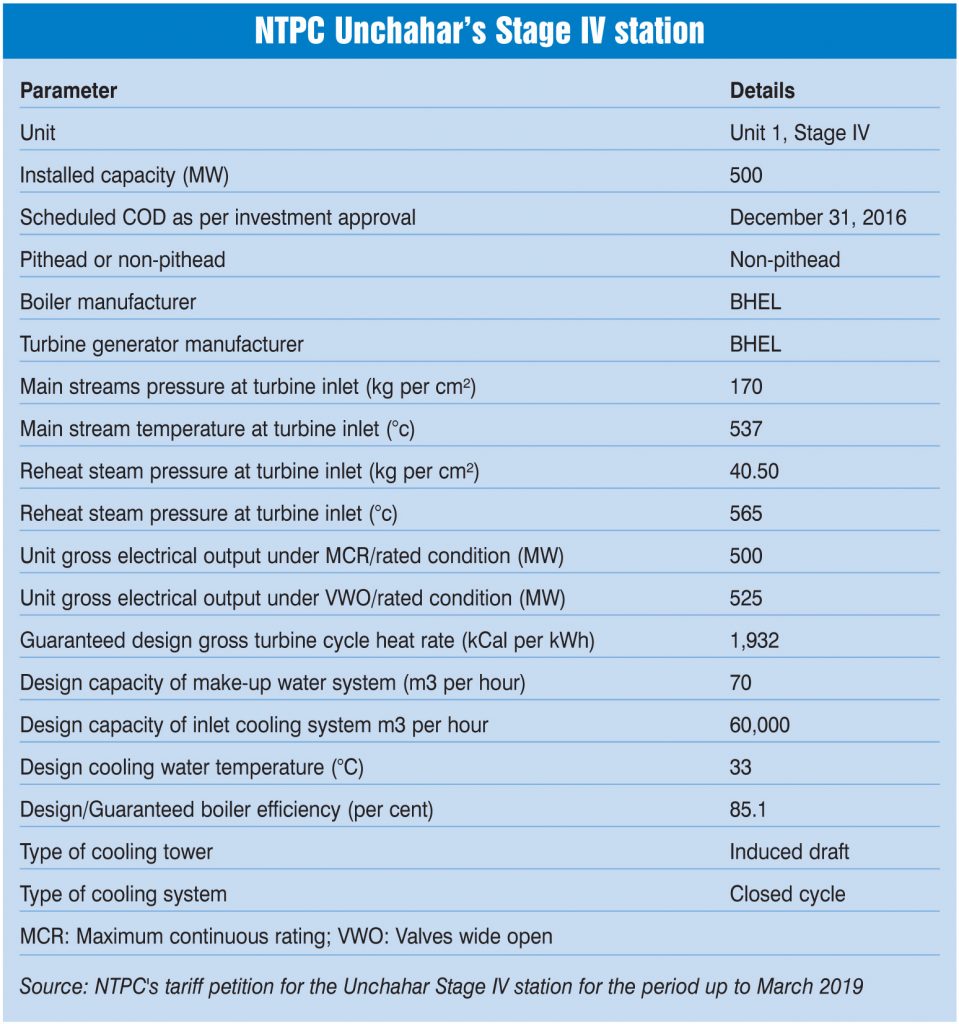 One of the key takeaways from this incident, experts point out, is the need to have a system for early detection of equipment issues as soon as pressure builds up to dangerous levels and temperatures rise beyond the accepted safety level. “There is a need for advanced pattern recognition technologies that can be used by gencos. These technologies can notify abnormal conditions much before operational alarms set off and thus help avoid such catastrophic accidents,” says Shardul Kulkarni, chief executive officer, Deesha Power Solutions. Another key learning from the incident is the need to have regular safety audits across the country’s thermal power fleet, besides stepping up routine maintenance and repair works. Experts say that there is a need for reviewing safety regulations and protocols for industrial operations.

NTPC, which was recently ranked second globally amongst independent power producers by Platts, has undoubtedly suffered a huge setback owing to the accident. Unchahar is slowly recovering from the mishap with NTPC working tirelessly to provide relief and normalise the situation. An ex-gratia of Rs 60 million, raised by the company’s 23,000 employees by contributing one day’s salary, has been given. This is in addition to the compensation announced by the power ministry, the prime minister and the chief minister of Uttar Pradesh for the victims and their family members. Now, the findings from the various inquiry committee reports are awaited.