High voltage direct current (HVDC) technology has provided the industry with a powerful tool to move a large quantum of power over long distances and expand the network’s capacity to transmit electricity. This technology was conceived back in 1954 when the first HVDC transmission link was set up between the mainland of Sweden and Gotland island and has changed the way electricity is transmitted in today’s world. Here is a look at the origin and evolution of the HVDC technology…

Earlier, alternating current (AC) electrical power systems dominated the industry and were the preferred choice for transmission to meet the growing demand for power, which was being generated far from where most consumers lived. This necessitated long distance transmission with the challenge of significant losses along the way. Therefore, direct current (DC) transmission at high voltage was considered as a solution to mitigate these challenges. However, one of the main hurdles was the lack of a suitable valve technology that could reliably and economically convert power generated as AC into high-voltage DC for transmission, and then back into AC at the consumers end.

Swedish engineer August Uno Lamm who was working for ABB (which at that time, was a part of the Swedish electro-mechanical company ASEA) and his team spent decades developing the solution to this problem, and by the early 1950s, the mercury arc valve was ready, paving the way for commercial HVDC transmission to become a reality.

Lamm’s efforts finally bore fruit in 1954 when the island of Gotland, off the east coast of Sweden, was connected to the mainland by an HVDC solution. Mercury arc type valves, which Lamm and his team had spent 25 years developing, were used for the first time on a commercial scale in this project. The initial scheme had a rating of 20 MW. The Gotland scheme was considered the first truly commercial scheme in the world and since then voltage and power levels have continuously risen.

ASEA’s second order of HVDC transmission equipment for a 160 MW/±100 kV Anglo-French cross-channel link followed soon after, setting the stage for the development of converters that could handle twice the voltage and would have 10 to 20 times higher power. Following the English Channel project, several other HVDC links using mercury-arc valves were built during the 1960s.

The largest mercury-arc valve transmission line built by ASEA was the Pacific DC Intertie, which was commissioned in the US in 1970. The project was developed in several stages starting at +/-400 kV voltage and 1,440 MW capacity, which was finally raised to 500 kV and 3,100 MW. The scheme comprised overhead lines between hydroelectric power stations and was built by a joint venture (JV) between ASEA and GE (General Electric).

The era of thyristor technology

The thyristor valve was first used in HVDC applications in 1970 and from then on, the limitations of HVDC were largely eliminated. The technology is now mature and witnessing rapid increases in voltage, power carrying capacity and length of transmission lines. This technology deploys thyristors, which are solid-state semiconductor switching devices used to convert AC to DC. This device conducts electricity in a forward direction and blocks its flow in the reverse direction. However, as in the case of mercury arc valves, thyristors require an external circuit to switch them off. The AC power system itself provides the means of commutating the current to another valve in the converter in HVDC applications. HVDC systems using thyristor valves came be known as line-commutated converter (LCC) HVDC. 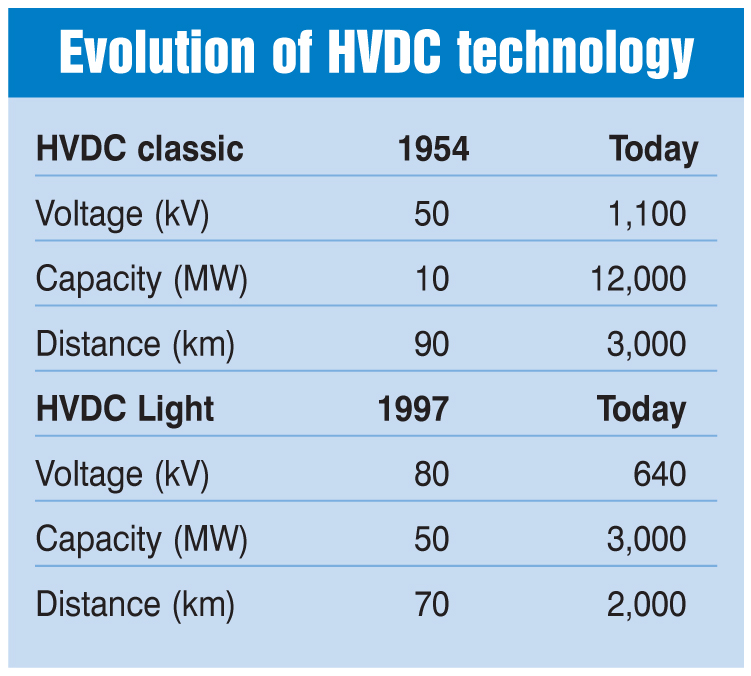 One of the mercury arc valves in the Gotland 1 link was replaced with an HVDC thyristor test valve, the first such application of thyristors. The uprated system entered service in 1970, the first use of thyristors in a commercial HVDC link. In 1983, a second link, Gotland 2 was constructed.

Another key project to be commissioned in 1977-79 was the 533 kV, 1,930 MW Cahora Bassa HVDC link between Mozambique and South Africa. This project had the distinction of being the first HVDC to operate above 500 kV. The project was executed by ZAMCO, which was a consortium of the AEG-Telefunken JV, Brown Boveri Company, and Siemens AG of Germany. Brown Boveri subsequently became a part of ABB and AEG became a part of Alstom.

Another major project was the Itaipu HVDC project in Brazil for which equipment was supplied by ASEA. The project had a transfer capacity of 6,300 MW and established a new voltage of ±600 kV DC. For a long time the ratings of the Itaipu project stood unchallenged.

The need for UHVDC

Towards the end of 1990s, as energy demand for major economies like China and India grew, the challenge was to deliver large quantities of power from power generating stations, especially cleaner power from remote hydropower projects to urban centres. Bulk power transmission systems, which could deliver power of over 5,000-6,000 MW over long distances (above 1,000-2,500 km) economically, were thus required. This led to the evolution of a new voltage level – 800 kV or ultra HVDC (UHVDC).

Realising the need, ABB began the testing and development of equipment to establish confidence at this voltage level. The resulting research and development efforts led to the first 800 kV UHVDC transmission link, the Xiangjiaba-Shanghai project in China, set up by the State Grid Corporation of China (SGCC) in 2010. The project has a power rating of 6,400 MW. 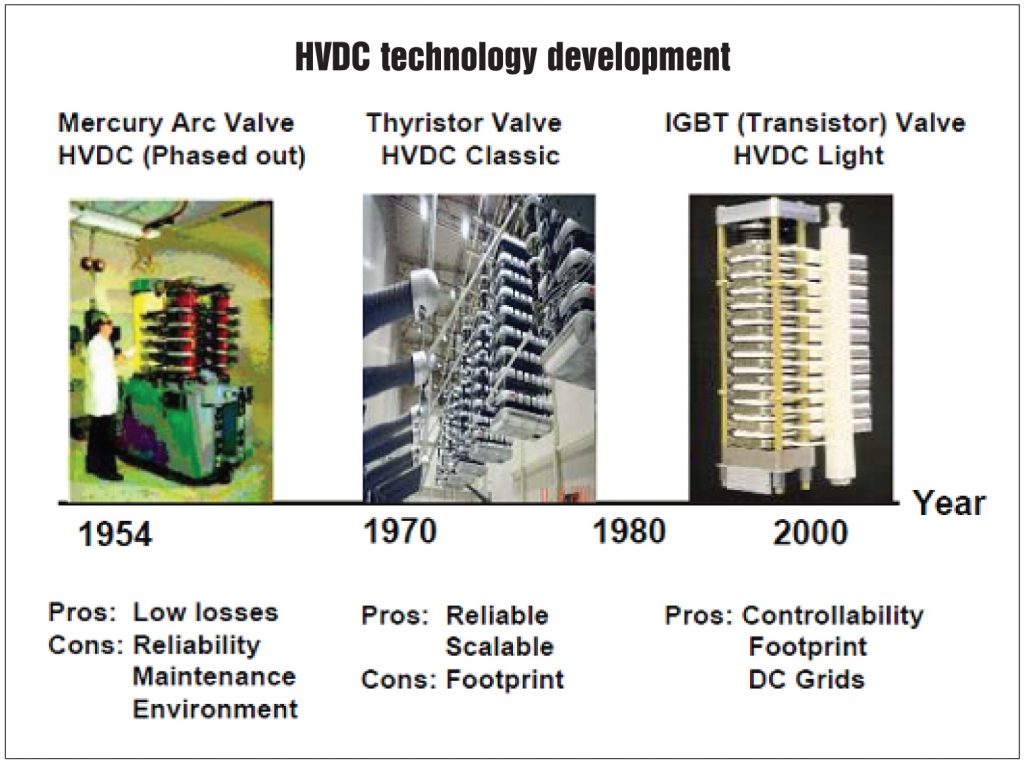 Another major development in the evolution of HVDC came about in 2011 when the development of 1,100 kV voltage was necessitated by the need to transmit power over even longer distances (of 3,000 km and above). In 2012, ABB successfully tested the prototype of the world’s most powerful converter transformer at a record 1,100 kV. By 2014, the company had successfully developed major equipment (like valves, breakers, surge arresters, capacitors and bushing) required for the deployment of 1,100 kV UHVDC power transmission systems.

In 2016, the world’s first 1,100 kV UHVDC link, connecting Changji to Guquan in China, was rolled out with a power transfer capacity of 12,000 MW, almost 50 per cent higher than the transmission capacity associated with 800 kV UHVDC links. The project is being set up by SGCC with ABB’s support.

Control and protection systems for HVDC

It incorporates advanced fault registration and remote control functions, and helps protect the link from unexpected disruptions. The MACH system is supported by the ABB Ability digital offering, which offers a large number of advanced features and more in the future.

The development of HVDC Light

While the focus of LCC HVDC was on higher voltages and higher capacity, in the 1990s another major breakthrough was achieved in the history of HVDC technology. In 1997, the ABB team developed a new solution using voltage sourced converters (VSCs), which allowed for greater controllability and made smaller HVDC systems economical. This new technology was known as HVDC Light. VSC HVDC technology is a more flexible technology than LCC HVDC and easily adaptable for transmission from renewable and variable sources of power.

A 3 MW pilot project using the HVDC Light technology was conducted in 1997. It operated with a DC voltage and current of 10 kV and 150 ampere respectively, and included advanced features such as a mixed overhead and cable DC system, electronic load current breakers, islanding and remote access.

Within the first decade of the launch of HVDC Light, eight additional transmission systems were commissioned across the world ranging from underground, marine and back-to-back converters as well as those positioned on offshore platforms. During this time, the power capacity was increased from 3 MW to 350 MW and switching patterns were optimised to reduce losses in the converter.

The HVDC Light technology has evolved since its inception. When this technology was introduced, it was based on a two-level converter and had the same basic functionality as today, but with relatively high losses. The focus of development over the years has been on maintaining functionality, improving performance and reducing losses in order to make it more economical. The two-level converter valve and custom designed series-connected press-pack insulated-gate bipolar transistors (produced by ABB) have been the cornerstone of HVDC Light since the first generation. The technical developments have made it possible to handle higher DC voltages applying a cascaded two-level converter and multi–level converters. Technology modules developed and refined during the past 15 years have made it possible to create converters with increased power, technical performance and lower losses, while retaining operational functionality. 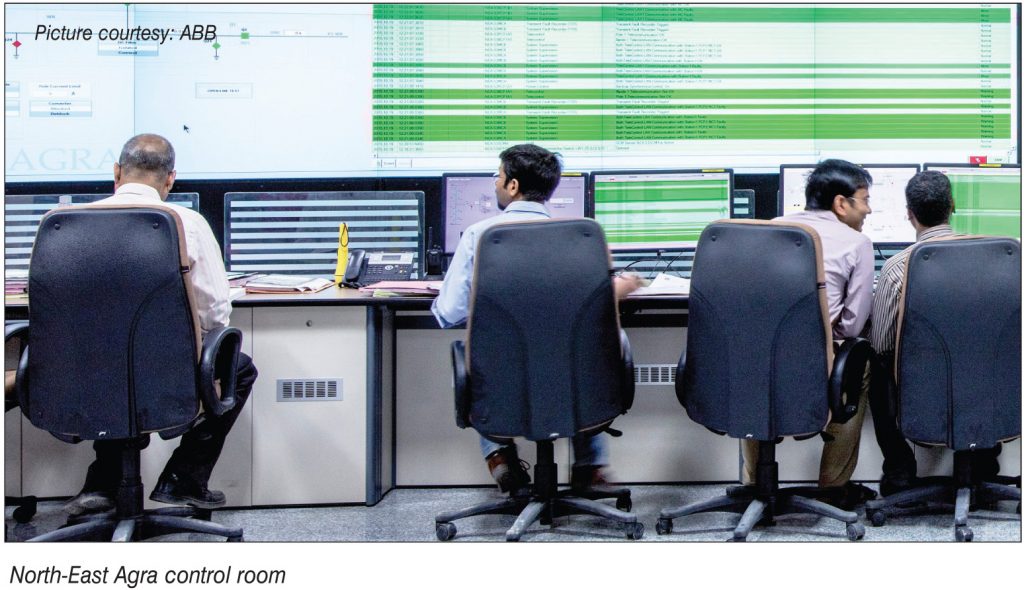 One of the many innovative features provided by ABB’s HVDC Light solution is a “black start” feature. The black start feature reduces restoration time, after an unexpected interruption, to fractions of a second under operational conditions. This functionality, when incorporated with the HVDC Light technology, performs an intelligent and controlled injection of electricity into the grid to quickly re-energise the system. As shown in a live demonstration of the Finnish Åland islands’ HVDC connection Ål-link, the black start system can restore power many times faster than without this innovative feature. The black start features enables the replacement of local auxiliary power supply, like diesel generators, eliminating the use of costly, polluting fossil fuels. This black start facility has been implemented in many HVDC Light projects. A major driver for its increasing deployment is cross-border interconnections, integration of renewables, city in-feeds and to reinforce existing AC grids.

The growing need to integrate and transmit large amount of remote renewable energy and to interconnect different power markets is the driving force behind the growth of HVDC transmission systems. In the evolution of HVDC technology over the years, clearly, the launch of HVDC Light technology has been a pioneering step. Its systematic development over several generations has made HVDC technology the natural choice for transmission projects today.