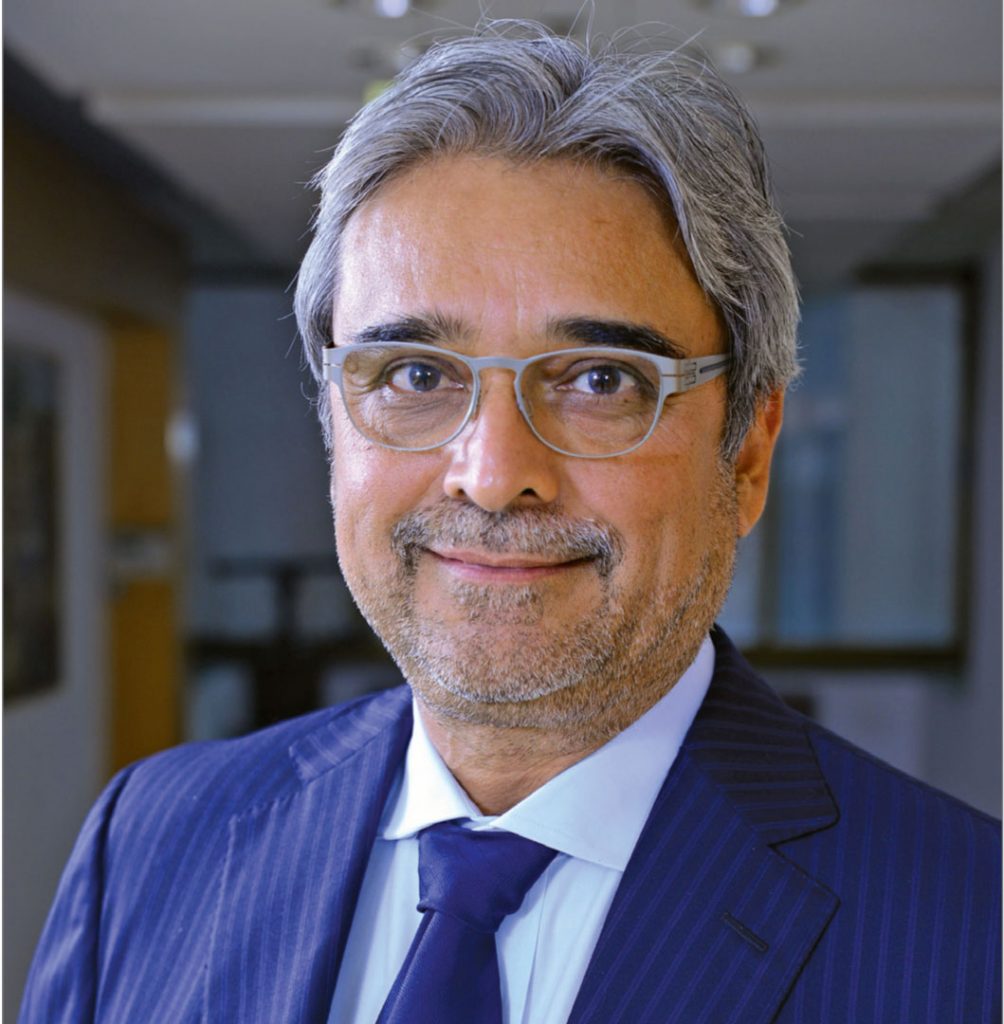 In his second stint with the company, Neeraj Sharma, President and Managing Director, Wärtsilä India, is focusing on tackling the new realities in the power sector, with energy storage being one of his biggest priorities…

Coming to India to head Wärtsilä as president and managing director (MD) in April was a homecoming of sorts for Neeraj Sharma because he had worked with the company about 20 years ago, from 1993 to 1996. But the changes that the power sector and India have undergone in that time are so gigantic that the use of the word “homecoming” needs to be suitably amended to encompass the fact that it is a new scenario that Sharma finds himself in.

In those days, it was all about power shortages and how to overcome them. Now, given that the shortage has been more or less resolved (though peak-time demand still presents a problem), it is all about reserves, reliability of power, and last-mile connectivity.

Sharma’s energies are focused on understanding where precisely the company stands. Wärtsilä has delivered around 250 power plants in the country with a total output of over 3,500 MW. What are its strengths? Where is it now? What’s the big picture? What are the priorities? Wärtsilä has a solid business in energy solutions, oil and gas, and marine services. In energy solutions, storage is naturally a priority. With renewable energy coming in and coexisting with conventional power generation, you have to be able to integrate renewables with the system, he says. Earlier, when renewable energy’s contribution was small, it could easily be managed. But the government’s targets for wind and solar are of a different order altogether now. Lower prices have also changed the landscape with the price of solar falling by some 80 per cent.

“The challenge with renewable energy is the big variations in supply that need to be balanced in real time by the rest of the grid. When solar or wind power peaks, conventional power has to be backed down to absorb it. Integration is a huge challenge because our baseload plants don’t have the flexibility to accommodate these peaks and troughs. Also, since the machinery is not designed to absorb these variations, it causes stresses,” he says.

Sharma says energy storage has become an important part of every power system and it is Wärtsilä’s topmost priority too. “Our storage solutions significantly improve efficiency by increasing backup capacity and creating new opportunities in electricity markets,” he says. In May 2016, Wärtsilä acquired US company Greensmith Energy Management, a market leader in grid-scale energy storage software and integrated solutions. Greensmith will operate as a business unit within Wärtsilä Energy Solutions, providing both stand-alone energy storage as well as hybridised energy systems, control software and integration expertise.  The acquisition will enable Wärtsilä to rapidly expand its footprint in the energy storage market globally and position itself as a premier energy system integrator. Sharma is hoping that India will develop to become the headquarters for the battery storage business in Asia.

He further adds that the future of energy is hybrid. “In some markets, renewables are competing neck and neck with traditional power generation and lowering the entry barriers for hybrid solutions. Fast-starting, internal combustion engines, integrated with energy storage, offer considerable potential for fuel and cost savings. With these innovative solutions, existing and future customers will be able to utilise energy storage technology together with traditional engine-based power generation,” he says.

In managing the integration of renewable and traditional sources of power, Sharma says while gas is expensive and coal the cheapest, the industry should not look at the variable cost of coal or gas in isolation, but at the system-level costs. “A gas engine can start and stop in two minutes and help absorb renewable energy. A thermal plant can take hours to come down. We can create flexibility of power by having hybrid solutions. So, we should look at the net cost of the system and not just the variable cost.”

Sharma left his job in Singapore to return to India to lead Wärtsilä. He has been greatly encouraged by the willingness of public sector utilities and the Ministry of Power to listen and to look for solutions. Although he is based in Delhi, Wärtsilä’s head office is in Mumbai, so he shuttles frequently between the two.

When he started his career as a marine engineer, he spent the first seven years of his adult life on ships. “You are totally on your own on a ship; it’s very hands-on and you have to do everything yourself with limited resources. It really throws you back on your own resources and prepares you physically and mentally. Those years really built up my mental capability,” he says. Luckily, his boarding school experience at Nainital had already created a foundation of self-reliance and independence. His father was in the armed forces and put Sharma into boarding school when he was nine to avoid his constantly changing schools.

On leaving school, Sharma enrolled at the Directorate of Marine Engineering Training (DMET), now known as the Indian Maritime University, in Kolkata in 1978 to prepare for a marine engineer’s career. “It was an exciting prospect to be at sea and to see the world and get paid much more than people in other professions. In the late 1970s, many opted for this. Many of my classmates left the IITs and joined us,” he recalls.

He spent most of his time with the Great Eastern Shipping Company, first as a junior engineer in 1982 and later was promoted to chief engineer. The experience, he says, is something that no one can anticipate until they start it. “No matter how much you train for it, the reality is very different – alone on a ship for months, no family, no home comforts, working constantly, keeping the systems clean, rough and rocky seas, tough physical and mental work, and rough crossings across the Pacific from, say, Japan to Vancouver. I was just 22. Nothing you do on land prepares you for the sea experience,” he says.

After his first daughter Anushka was born, Sharma and his wife Arundhoti decided he needed to be back on terra firma. Long absences would impinge on their family life. In 1990, he joined Thermax, which hired him for sales, although it believed that marine engineers made great service engineers.

Sharma wanted to work in sales because, as he says, if he was going to work as a service engineer, he may as well remain on a ship where he would be paid more. So Thermax gave him a job as a sales executive and Sharma, despite earning a fourth less than his ship salary, took it up because he wanted to branch out into the commercial side to complement his technical experience.

Later in his career at GE, from 2005 to 2009, he rounded off his capabilities further by taking up a management role. “It was at GE that I learnt how to work in a very big company, learnt its operating rhythms, the emphasis on human development, which has led to so many ex-GE leaders running companies, developing human capital, building one’s own leadership qualities. I was an engineer and a commercial engineer, but it was important for me to understand the big management picture,” he says.

But Sharma really came into his own as a leader while working with elevator and escalator company Kone Corporation, Finland. Later, he would go on to be executive vice-president, Asia Pacific, and a member of the executive board. But his first assignment was with Kone India where, as MD, he fine-tuned his management skills. Luckily, a construction boom was under way in India at that time, with tall buildings requiring elevators coming up everywhere.

“What we achieved in five years was amazing. We turned the company from a Chennai-centric organisation into a pan-Indian one. We achieved phenomenal growth along with employee engagement and customer satisfaction. Everything I had learnt at GE came into play at Kone,” he says.

After five years, following his promotion to the executive board, he moved to Singapore. He smiles when asked about the coincidence that he has worked for two Finnish companies. What exactly is this Finnish fetish? “I enjoy working with Finnish people,” he replies. “They are humble and straightforward, to the point, transparent. Both Kone and Wärtsilä are very non-hierarchical and democratic in ethos. Everyone is treated equally. There is no bowing or scraping when seniors are around. And the Finns appreciate Indian engineering talent. At Wärtsilä, our engineers are doing projects all over Asia and Africa. Everything with the Finns is based on merit.”

In his spare time, Sharma likes to travel with Arundhoti, who works as an interior consultant, and his daughters (the second daughter, Nayanika, came along later). They like to pick a country and stay there for a week or 10 days to immerse themselves in it. The last holiday was a road trip in Croatia, along the Adriatic coast, from the picturesque town of Dubrovnik in the south to Zagreb in the north.

Next year, he fancies going to Scotland to sample some nice single malts at various distilleries and also play golf at St Andrews while celebrating a friend’s 60th birthday. The golf bug has just bitten him. He concedes it is a time-consuming game, but he grabs a chance to play whenever possible.

Later still, he is thinking of contributing to society in some way. The work that Wärtsilä is doing in corporate social responsibility is very important to him. The staff are closely involved and the goal is to have a direct impact on people’s lives. “I don’t have any definite ideas yet about what exactly I will do, but the seed has been sown about giving back to society. What form it will take, I don’t know, but I want to do it.”