A state’s hydropower policy plays a critical role in the exploitation of its potential. However, most states have outdated policy frameworks that are not attracting investment in the sector. Himachal Pradesh is an exception in this regard. In 2016, the state government issued amendments to its Hydro Power Policy, 2006, in order to promote project development in the segment and ease the procedural complexities. As per the latest amendment, developers are required to submit their proposals to the concerned deputy commissioners (DCs) for obtaining approvals/no-objection certificates (NOCs) from different departments including gram panchayats. The DC will forward the same to the relevant departments within seven days and NOCs will be issued within 30 days through a single-window clearance mechanism. In addition, hydroelectric projects (HEPs) in the Chenab basin will have the option to defer the sharing of 12-15 per cent of free power with the state to the thirteenth year from the start of operations and also extend the sharing of free power over a period of 18 years compared to the earlier 12 years. These amendments are expected to increase investment in the state’s hydropower sector and ensure higher cash flows to developers in the initial years of project operation.

Jammu & Kashmir, too, has drafted an investor-friendly hydropower policy, which is yet to be finalised. The draft policy has proposed the state’s exemption from free power supply for the first 10 years after project commissioning and grant of incentives for early commissioning. Besides, no entry tax, value-added tax or water usage charges will be levied on the projects. Meanwhile, the central and state governments have put eight HEPs in Jammu & Kashmir on fast-track mode after some had been stalled for years. These projects are the Sawalkote (1,856 MW), Kirthai I (390 MW), Kirthai II (930 MW), Pakal Dul (1,000 MW), Kwar (540 MW), Kiru (624 MW) and, Bursar (800 MW) in the Chenab basin, and the multi-purpose Ujh (212 MW) project in the Ravi basin.

In the north-eastern region, the entire capacity planned to be developed is in the state of Arunachal Pradesh. Even in the eastern region, where 1,253 MW of projects are under way, the development is concentrated in Sikkim and West Bengal only, with 1,133 MW of projects planned in Sikkim. Further, in the southern region, 1,090 MW of hydropower capacity is in the pipeline, of which 960 MW is coming up in Andhra Pradesh. Recently, the state cabinet approved the construction of the 960 MW Polawaram HEP by Andhra Pradesh Power Generation Corporation Limited. The project is scheduled to be commissioned by 2021-22. In the western region, only the 400 MW Maheshwar HEP in Madhya Pradesh is under construction, although it is stalled at present.

Some of the key upcoming projects are NHPC’s Subansiri Lower (2,000 MW) in Arunachal Pradesh, NHPC’s Parbati II (800 MW) in Himachal Pradesh, the VK Group’s Ratle (850 MW) in Jammu & Kashmir and NTPC’s Tapovan Vishnugad (520 MW) in Uttarakhand. In Sikkim, the largest project under way is Teesta Stage VI (500 MW), which is being developed by Lanco Energy Private Limited. However, most of these are currently stalled owing to a financial crunch, environmental concerns or local protests. 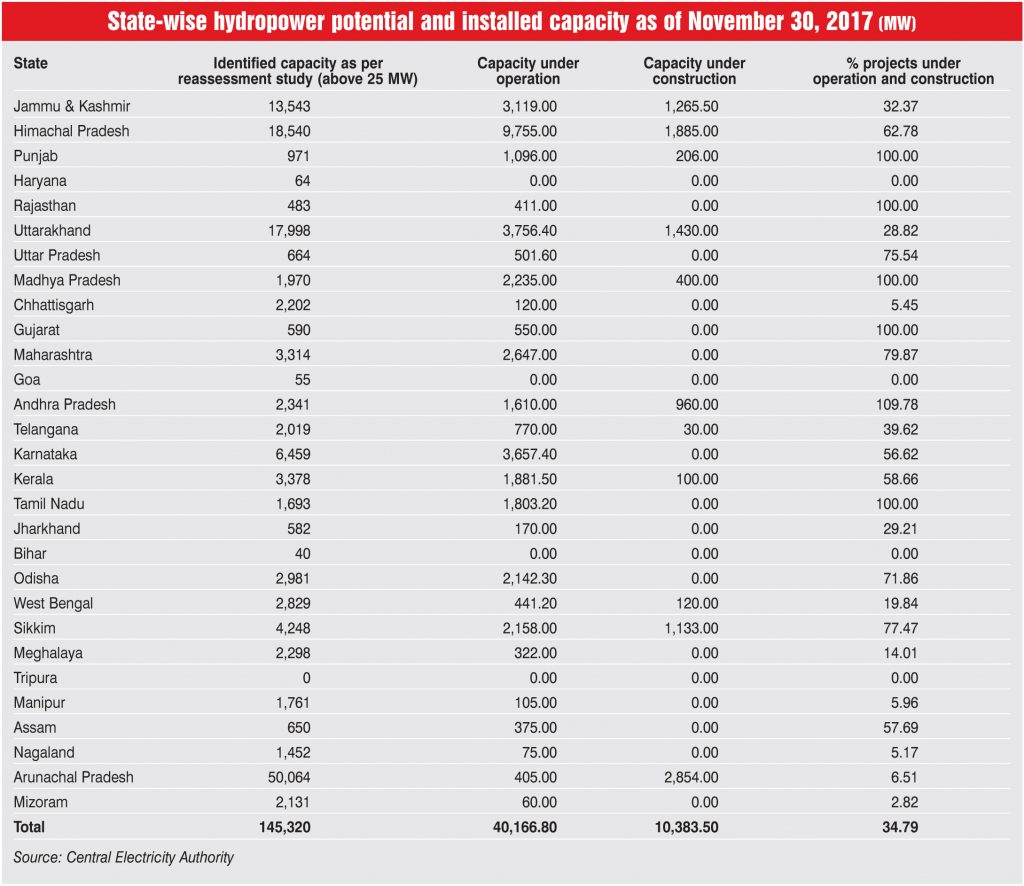 Hydropower development in India has been facing a plethora of challenges. States such as Arunachal Pradesh and Sikkim have not been able to effectively harness their hydropower potential. In Arunachal Pradesh, this has been primarily because of the anti-dam protests by environmentalists and locals, rehabilitation issues, and interstate and cross-border disputes regarding water sharing. Recently, in October 2017, the Siang Indigenous Farmers’ Forum opposed the construction of a 10,000 MW hydropower project over the river, citing displacement of the tribal communities in the area. In Sikkim, the main issues being faced in the development of hydropower projects are delays in land acquisition and environmental and forest clearances. Further, since the state lies in a severe seismic intensity zone, it is prone to earthquakes and natural calamities, which have led to damage of HEP cons truction sites in the past.

Geological surprises have impacted the construction of hydropower projects in the states of Uttarakhand, Himachal Pradesh and Jammu & Kashmir as well. In Uttarakhand, the Supreme Court had revoked clearances of 24 out of 70 projects planned in the Alaknanda-Bhagirathi river basins after the 2013 floods, citing direct and indirect impact of the projects on the river flow. Meawhile, in Jammu & Kashmir, adverse law and order conditions hamper project activities. Thus, intervention from the state government is required to ensure security in order to attract investors and fast-track the development of the projects. Besides, the water sharing dispute among states is a key challenge. Since water is categorised as a state subject, consent from all states affected by the HEP is required. Projects that have been facing delays on account of water sharing disputes include the 975 MW Inchampalli HEP in Andhra Pradesh, the 60 MW Karbi Langpi HEP in Assam, 480 MW Cauvery hydropower project in Tamil Nadu, the 150 MW Bhavani HEP in Kerala, and the 320 MW Sindol HEP in Odisha.

In view of the increasing power demand and need for a viable energy storage technology, the state governments need to fast-track their stalled hydropower projects and work in association with all stakeholders to effectively harness hydropower. 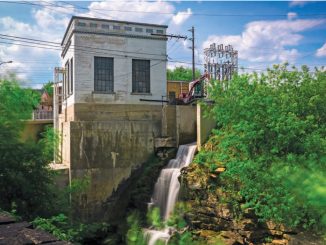 May 2017
The small-hydro power (SHP) industry has experienced limited growth over the past one year, but a strong [...]
More