With constantly evolving energy needs and increasing environment consciousness, the focus is shifting away from coal-based generation to cleaner sources of power. While renewables promise a clean future, the inherent variability of this resource poses a challenge to reliable grid operations. In this scenario, the development of hydropower is gaining momentum. While India is in the process of formulating new policies to revive hydropower development in the country, it has simultaneously entered into strategic agreements to develop hydropower in neighbouring countries. Nepal and Bhutan have been at the forefront of these bilateral agreements. Both countries have a huge hydropower potential that is yet to be tapped. A well-drafted power sharing arrangement with these countries can also help reduce fossil fuel consumption in India, while boosting economic development in the neighbouring countries. Further, greater policy and regulatory clarity,  in the wake of the cross-border trading guidelines released by the power ministry (in December 2016), and the associated draft regulations and final rules issued by the central regulator (February 2017) and the Central Electricity Authority (CEA) (October 2017) respectively is expected to provide a fillip to cross-border trade. This will help create a larger regional electricity market in South Asia. In fact, such trade complements the electricity demand and resource endowments in the region.

The abundance of water resources in Bhutan offers huge scope for hydropower development. The country has a hydropower potential of 40,000 MW, most of which is still untapped. As of 2014-15, Bhutan’s installed hydropower capacity stood at 1,606 MW. In addition, projects aggregating 3,658 MW are currently in the pipeline as part of the collaborative initiatives of the two countries.

Bhutan has had a long association with India and has signed several agreements enabling both countries to mutually benefit. India has been importing hydropower from Bhutan since the mid-1980s. Currently, four plants, aggregating a capacity of 1,542 MW and with a total design energy supply of 6,676 MUs, are operating in the country under Indo-Bhutan energy cooperation agreements. These include the 336 MW Chukha hydroelectric project (HEP), the 60 MW Kurichu HEP, the 1,020 MW Tala HEP and the 126 MW Dagachhu HEP. During 2015-16 and 2016-17, India imported 6,133 MUs and 5,585 MUs of power respectively from Bhutan.

The collaboration on hydropower between the two countries has been evolving over the years. In addition to the four operational HEPs, four plants totalling 3,540 MW and entailing a cost of Rs 246.36 billion are under construction under the same agreement. Of the total under-construction capacity, 2,940 MW is being developed in the intergovernmental mode, which involves financial support from both governments. These include the 1,200 MW Punatsangchhu I project, the 1,020 MW Punatsangchhu II project and the 720 MW Mangdechhu power plant.

The Punatsangchhu I HEP entails a cost of Rs 93.75 billion and is being developed by the Punatsangchhu I Hydroelectric Project Authority. The project is being funded by 40 per cent grants and 60 per cent loans. The Puntasangchhu II HEP is being developed by the Punatsangchhu II Hydroelectric Project Authority and is expected to result in annual carbon reductions of 3.19 million tonnes (mt). The Rs 72.91 billion project is being funded by a 30 per cent grant and a loan that is repayable in 30 biannual instalments at a 10 per cent annual interest rate. The Mangdechhu Hydroelectric Project Authority is developing the Rs 40.21 billion Mangdechhu HEP, which is expected to generate 2,923 GWh of electricity, while offsetting 2.2 mt of carbon dioxide a year. As per the agreement, the projects are being developed under the United Nations’ clean development mechanism programme to generate carbon credits equivalent to the quantum of carbon dioxide displaced from fossil fuel generation. The projects are part of a collaboration between the two governments to develop 10,000 MW of hydropower capacity in Bhutan by 2020, as stated in the 2006 India-Bhutan agreement on hydropower.

Besides these, detailed project reports (DPRs) have been prepared and cleared by the CEA/Central Water Commission for the Kholongchhu, Bunakha, Wangchhu and Chamkharchu I HEPs, aggregating 2,120 MW of capacity. An implementation agreement has been signed between the governments of India and Bhutan for this capacity. The ongoing efforts are expected to add significant capacity in the coming years under the bilateral partnership.

Nepal has a hydropower potential of about 83,000 MW, of which 43,000 MW has been identified as economically viable. Against this, its installed hydropower capacity is only 968 MW as of 2016-17. The country has been exporting power to India through multiple hydropower plants. Plants aggregating 51 MW of capacity have been installed in Nepal under the Indo-Nepal energy cooperation agreement. These include the 21 MW Trishuli HEP, the 15 MW Western Gandak HEP, the 14 MW Devighat HEP and the 1 MW Pokhara HEP.

Of late, the Indian private sector has been participating actively in aiding hydropower development in Nepal. A host of projects involving the private sector are currently in the pipeline. The 300 MW Upper Karnali project is being implemented by a consortium comprising the GMR Group and the Italian-Thai Development Project Company on a build-own-operate-transfer (BOOT) basis. The consortium is also developing the 600 MW Upper Marsyangadi HEP. SJVN Limited  is developing the 900 MW Arun III HEP on a BOOT basis. As per the MoU signed between SJVN and the Government of Nepal, the company will provide 21.9 per cent power to Nepal for a concession period of 25 years and will pay 7.5 per cent of the total income as royalty to the Nepal government after this period. In addition, Tata Power and SN Power have partnered with the Nepal government for developing the 650 MW Tamakoshi III HEP.

Hydropower development is also taking place through intergovernmental cooperation. The 5,600 MW Pancheshwar HEP is one of the biggest projects to be developed in Nepal. The project, being built on the river Sarada (known as Mahakali in Nepal), is being spearheaded by the Pancheshwar Development Authority. The Pancheshwar project also has a 240 MW re-regulating dam at Rupaligad, which is expected to yield significant benefits. Recently, an expert panel of the Ministry of Environment, Forest and Climate Change waived the requirement for a joint mechanism to assess the environmental impact of the project. This is expected to fast-track its development.

Another key intergovernmental project is the 3,300 MW Sapta Koshi High Dam. The dam is expected to yield irrigation and flood control benefits. The concerned authorities are currently in the process of preparing the DPR.

Going forward, India and Nepal are expected to collaborate on several other projects. India stands to benefit from Nepal’s abundant water resources that are yet to be fully tapped. For Nepal, the development of its hydro potential will help in economic development, employment generation and an assured revenue stream given the guaranteed market in India for power generated from these projects. 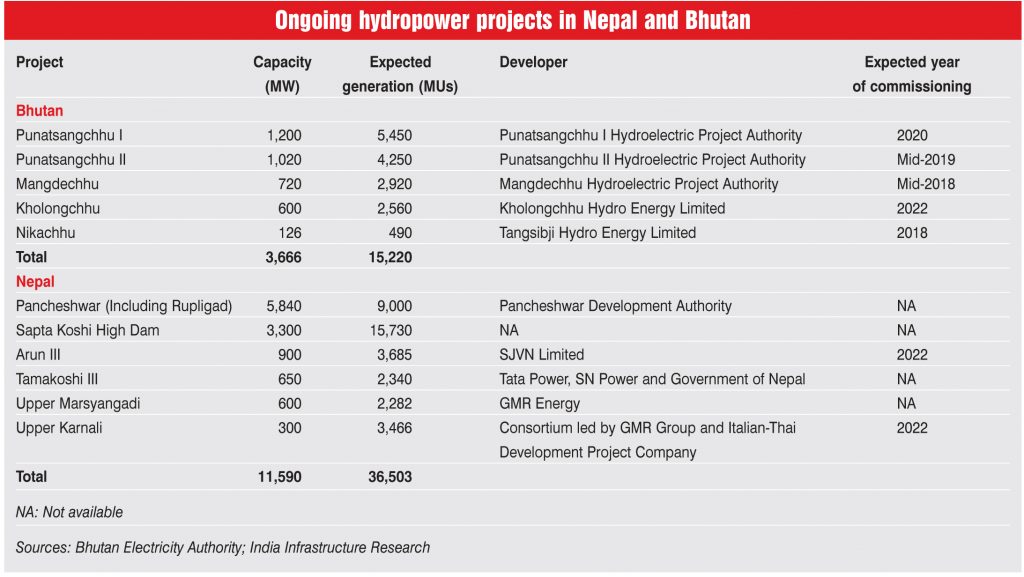 Developing the latent hydropower potential in Nepal and Bhutan can significantly alter the energy dynamics in South Asia. Developing strategic partnerships with these countries can enable India to strengthen its position both economically and geographically. As hydropower gains traction, these bilateral ties will serve an important purpose in India’s energy scenario.

December 2017
Pumped storage hydropower is one of the most developed and reliable energy storage technologies globally. With an [...]
More