Power consumption in Bihar has seen a remarkable increase in recent years. Peak demand increased by over 138 per cent during the period 2012-17 vis-à-vis the all-India average growth of just 21 per cent.

To keep pace with the state’s growing power demand and ensure reliable power supply, Bihar State Power Transmission Company Limited (BSPTCL) has been working on a number of initiatives to expand its transmission network, ensure timely execution of projects and deploy new technologies. In 2016-17, its transmission line length grew by an impressive 31 per cent year on year, while its transformer capacity rose even higher by 49 per cent. Going forward, with various central government schemes in progress to expand electrification, the state’s power demand is expected to grow exponentially. To meet this demand, BSPTCL has charted an ambitious capacity addition plan for the period 2017-22.

BSPTCL was formed after the unbundling of the erstwhile Bihar State Electricity Board in November 2012. It is responsible for intra-state transmission and wheeling of electricity in the state.

As of March 2017, BSPTCL operated a transmission network comprising 12,230 circuit km (ckt. km) of lines, 126 grid substations and a transformation capacity of 10,440 MVA.

The state transco has undertaken a number of initiatives to improve its operational performance. Its transmission losses stood at 4.74 per cent in 2016-17 and fell to 4.29 per cent by September 2017. It plans to reduce these to 3.92 per cent during 2018-19.

To enable a centralised view of the substations, BSPTCL has done geographical information system (GIS) mapping of all its operational and under-construction grid substations. Further, enterprise resource planning (ERP) is under implementation, which will integrate various systems within the transco and enhance organisational efficiency. 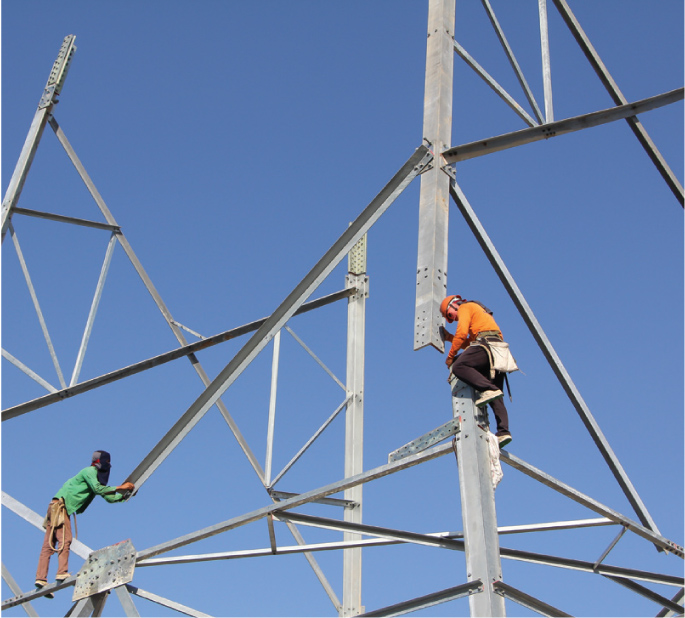 In order to address right-of-way (RoW) constraints, BSPTCL has decided to install transformers with a minimum rated capacity of 50 MVA for the new substations being set up in the state. Further, in order to cater to the growing load, 24 units of 80 MVA 132/33 kV transformers are being installed in all substations of Patna district. In addition, narrow-base and multi-circuit towers, which require less RoW, are being deployed by the utility.

BSPTCL has also streamlined its project execution processes during the last one to two years. For faster redressal of issues and implementation of projects, a WhatsApp group has been created, wherein contractors are allowed to raise any pending project-related issue. In addition, a web portal has been formed for monitoring project execution against stipulated timelines. To ensure adherence to project timelines and resolve project-related issues, regular review meetings are conducted at the transco’s headquarters. Through these efforts, the timelines for the construction of substations and lines have been reduced from 18-24 months to 12-18 months. Significant improvement has also been made in the payment cycle. Payment through real-time gross settlement (RTGS) has been adopted and a timeline for the verification of bills has been fixed.

BSPTCL faces a plethora of challenges during the construction phase of new substation and transmission line projects owing to the state’s geographical location. Since Bihar is home to several major rivers such as Koshi, Burhi and Gandak, there is a risk of flooding and the water remains accumulated during most of the year, hampering project execution. Difficult terrain in certain areas also acts as an obstacle during project construction.

In addition, since Bihar is a largely agricultural state with a high population density, RoW and land acquisition issues continue to pose challenges for timely completion of projects. To address these issues, the transco has adopted a lease policy for private lands. In Bihar, the declared rates of land are compatible with the local rates and since BSPTCL offers four times the amount for the land, it acts as an incentive to farmers to lease out their land, thereby mitigating RoW issues. As such, the lease policy has been useful in improving the execution rate of projects. 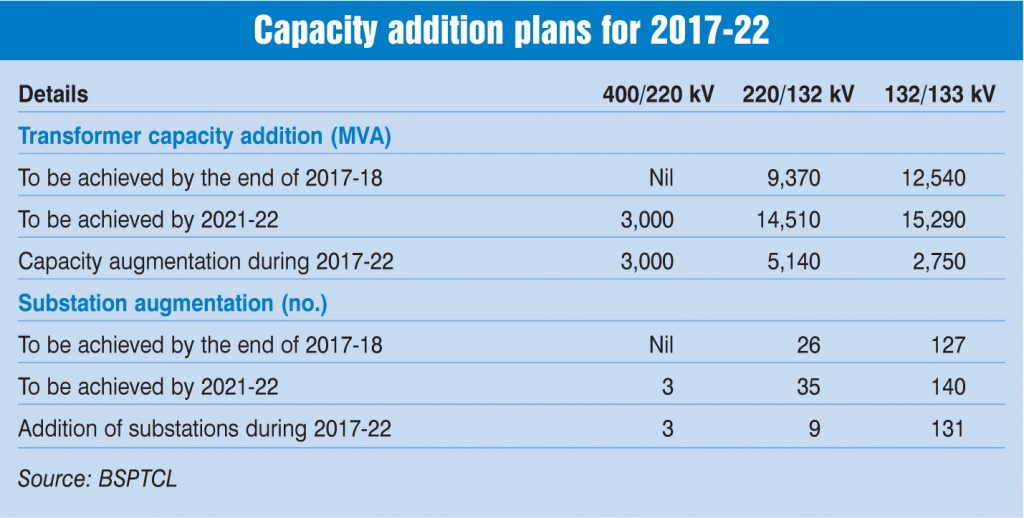 Besides, delays in obtaining various statutory approvals and clearances hamper the progress of projects. For instance, obtaining approvals for transmission line construction near railway crossings leads to significant time overruns. Further, since there are fewer industries in the state, there is a wide variation in power consumption, owing to which the utility has invested in a dedicated team for forecasting demand and power availability.

To meet the expected growth in demand, various new substations are in the pipeline. During the period 2017 to 2022, BSPTCL aims to install a total of 143 substations at various levels and add 10,980 MVA of transformer capacity. Since it currently does not have any capacity at the 400 kV level, three substations with an aggregate capacity of almost 3,000 MVA are expected to be added by 2022.

The transco’s plans include re-conductoring of the existing lines with HTLS and deployment of information and communications technology (ICT) solutions at various transformers at the 400 kV and 200 kV levels.

In order to augment grid capacity in the state, Bihar State Power Holding Company Limited has formed a joint venture (JV) company with Powergrid Corporation of India Limited (Powergrid) called Bihar Grid Company Limited (BGCL). The JV will undertake a number of projects in the state, including the construction of new substations with bays and associated transmission lines as well as augmentation works at the existing grid substations. The funds requirement for this transmission network augmentation is around Rs 30 billion. As part of another system strengthening initiative, BGCL is planning the construction of 16 transmission lines, four associated substations and seven line bay extension projects in the state. To this end, Power Finance Corporation has sanctioned financial assistance of Rs 13.5 billion to BGCL. 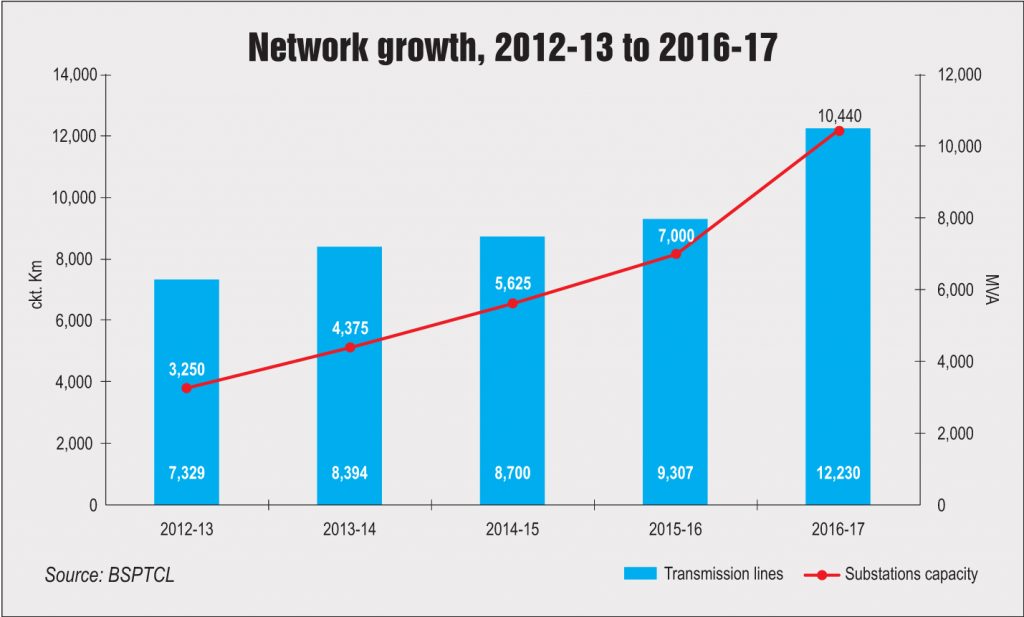 BSPTCL has witnessed significant growth in line length and capacity over the past five years. The transco is increasing its deployment of advanced transmission technologies in order to improve its operational performance. With considerable capacity planned to be added in the future, the utility seems well-positioned to meet the anticipated growth in demand in the state. 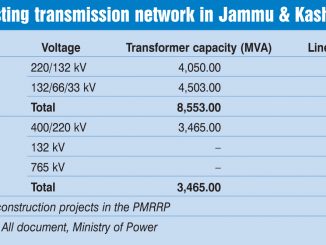 August 30, 2017
Jammu & Kashmir is highly dependent on local hydropower projects for meeting its energy needs as its [...]
More 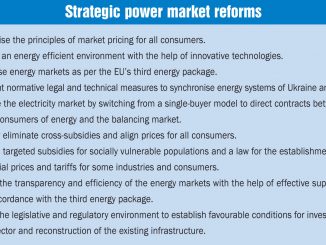 July 8, 2017
Ukraine has been taking all the necessary steps to secure its membership in the European Union (EU) [...]
More