The traditional electricity grid is gradually evolving to become smart, driven by growing digitalisation and the changing energy mix. The smart grid journey in India began in 2010 when the Ministry of Power (MoP) constituted the India Smart Grid Forum and the India Smart Grid Task Force to provide policy direction to smart grid initiatives in the country. In 2012, 10 smart grid pilot projects and one smart city research and development (R&D) platform were sanctioned, with nearly 50 per cent funding support from the MoP.

The functionalities being tested in these pilots include advanced metering infrastructure (AMI), outage management system (OMS), peak load management (PLM), power quality management (PQM), distributed generation and supervisory control and data acquisition (SCADA). So far, only one project by Uttar Haryana Bijli Vitaran Nigam Limited has been completed, while the others are at various stages of implementation.

The next milestone in India’s smart grid journey was the launch of the National Smart Grid Mission (NSGM) in March 2015. The mission created an institutional mechanism for the planning, monitoring and implementation of policies and programmes related to smart grid activities in the country.

Moreover, it brought together all smart grid-related activities in India under its ambit. Under the NSGM, four new projects were approved in 2016 to be implemented by state utilities with 30 per cent financial support from the central government. These projects are in the initial stages of development. The NSGM is also coordinating the development of smart grids under the Smart Cities Mission.

The pilot projects sanctioned by the MoP are being implemented across Assam, Gujarat, Himachal Pradesh, Haryana, Karnataka, Punjab, Telangana, Tripura, Puducherry, Uttar Pradesh and West Bengal, at a total cost of Rs 4.8 billion (including Rs 1.8 billion funding support). These include a smart city demonstration project at the Indian Institute of Technology (IIT)-Kanpur campus and the Smart Grid Knowledge Centre being developed by Power Grid Corporation of India Limited (Powergrid) in Manesar, Haryana. All projects are being partially funded by the MoP, except the project developed by Uttar Haryana Bijli Vitran Nigam (UHBVN), which was funded by the New Energy and Industry Technology Development Organisation (NEDO).

In January 2018, UHBVN completed and inaugurated its smart grid technology demonstration project in Panipat, with grant from Japan under NEDO. The project entailed the installation of the SCADA system as well as nearly 10,000 smart meters. The project demonstrated technology for the reduction of aggregate technical and commercial losses and peak load, as well as for monitoring and control of distribution lines.

The Chamundeshwari Electricity Supply Company (CESC) pilot project at Mysore is at an advanced implementation stage with the installation of 21,824 smart meters and the commissioning of the associated distribution control unit (DCUs), distribution transformer monitoring units (DTMUs) and modems. About 87 per cent of the meters are already communicating with the DCU and the integration of various applications is also completed. The project was showcased to the heads of various discoms at the end of January 2018.

Assam Power Distribution Company Limited’s (APDCL) project in Paltan Bazaar covering 15,938 consumers is also at an advanced stage, and is scheduled for completion by March 2018. The discom has already installed over 13,570 smart meters, along with control centre hardware equipment under the project. The integration of smart grid systems with IT systems installed under the Restructured Accelerated Reforms and Power Development Programme is currently under way. 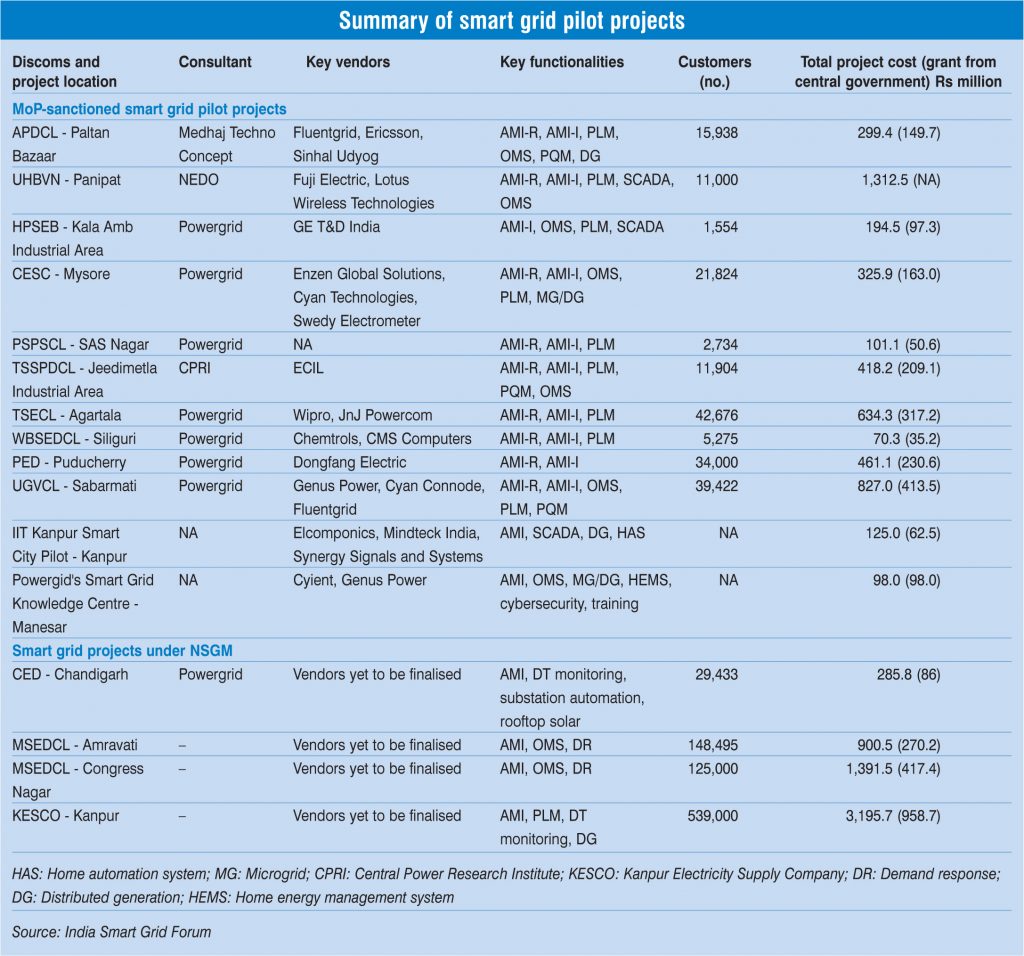 Meanwhile, Himachal Pradesh State Electricity Board Limited is implementing a smart grid pilot project in the Kala Amb industrial area covering about 1,554 consumers. So far, the utility has installed about 1,346 smart meters, along with sectionalisers, remote terminal units (RTUs), fault passage indicators and DTMUs. The multiprotocol label switching link has been established and RTUs have started reporting to the control centre.

Telangana State Southern Power Distribution Company Limited’s (TSSPDCL) pilot project in the Jeedimetla industrial area, covering about 11,904 consumers is also progressing at a fast pace. Smart meters under the project are scheduled to be commissioned in March 2018. The Tripura State Electricity Corporation Limited (TSECL) project in Agartala, covering the largest consumer base of 42,676, has also made significant progress. About 130,000 meters have been installed, of which around 50 per cent are already communicating with the servers. The smart grid control centre has been set up while the integration of various new modules with existing systems is under way. The rooftop solar net metering and billing mechanism is also being integrated with the AMI system.

In the Puducherry Electricity Department (PED), the site surveys, civil and electrical works of the control centre building, and type tests of smart meters have been completed. China-based Dongfang which is implementing the project has dispatched about 3,000 smart meters for the project covering 34,000 consumers.

The pilot projects being implemented by Uttar Gujarat Vitaran Nigam Limited (UGVCL), Punjab State Power Corporation Limited (PSPCL) and West Bengal State Electricity Distribution Company Limited (WBSEDCL) are progressing at a slow pace. For UGVCL’s pilot project in Sabarmati, which is expected to cover 39,422 consumers, the procurement of equipment for the control and smart meters is in progress.  Besides, testing of control centre hardware and integration of meter data management system (MDMS) with the head-end system is in progress. PSPCL’s project at SAS Nagar is also at the tendering stage, and bidding for smart meter procurement and MDMS implementation is currently underway. Meanwhile, WBSEDCL’s project at Siliguri is in the testing phase.

The smart city pilot project at IIT-Kanpur aims to develop a smart city prototype and an R&D platform for smart distribution systems. The project is nearing completion as the SCADA system, rooftop photovoltaic systems and AMI servers have been commissioned. The project closure report is under finalisation.

Powergrid’s Smart Grid Knowledge Centre at Manesar is being entirely funded by the MoP. The Rs 98 million project will comprise state-of-the-art laboratories for power system analysis, smart grid control and automation, advanced equipment diagnostics, etc. Under the project, a contract has been awarded for home energy management system. The AMI and OMS have also been installed while microgrids are expected to be commissioned by March 2018.

In addition, Ajmer Vidyut Vitran Nigam Limited has implemented a smart grid pilot project, funded by the United States Agency for International Development, under which smart meters have been installed for 1,000 consumers in Ajmer.

Projects under the NSGM are under implementation in Subdivision 5 (Chandigarh), Congress Nagar (Maharashtra), Amravati (Maharashtra) and Kanpur City (Uttar Pradesh), at a cumulative investment of Rs 5.8 billion, 30 per cent of which is funded by the government. Most of the projects are awarding bids for various components such as AMI, SCADA, distributed generation, electric vehicles and cybersecurity.

The smart grid project in Chandigarh is being implemented by the Chandigarh Electricity Department (CED) at a cost of Rs 285.8 million. The utility floated the tender for SCADA and AMI implementation in December 2017. MSEDCL is executing two smart grid projects entailing AMI, OMS and demand response implementation at Amravati and Congress Nagar at a total cost of Rs 23 million. Tenders for these works were floated in December 2016, but the bidders are yet to be finalised. Meanwhile, the Kanpur Electricity Supply Company project, entailing a cost of Rs 32 million, is currently stalled as the utility has not yet confirmed its decision regarding continuing the project.

Besides the above-mentioned projects, several smart grid pilots are being executed by private utilities such as Tata Power, CESC Limited and Reliance Infrastructure. These projects have shown promising results.

However, the progress of smart grid projects being implemented by state-owned discoms has been slow owing to delays in award of contracts to vendors and finalisation of detailed project reports, as well as implementation challenges. Given that smart grid technologies are relatively new in India and a defined framework of specifications and regulations is still under development, these delays were anticipated.

However, the central government’s impetus to smart metering under various initiatives such as the Ujwal Discom Assurance Yojana and the Integrated Power Development Scheme is expected to fast-track the power sector’s transition to smart grid. In addition, the Smart Cities Mission recently received a major boost after the allocation in Union Budget 2018-19 was revised to Rs 62 billion, an increase of 54 per cent over the previous year.

Going forward, the learnings from the implementation of the smart grid pilots and the government’s push to meet the smart metering targets will play a key role in defining the trajectory of smart grid development in the power sector. 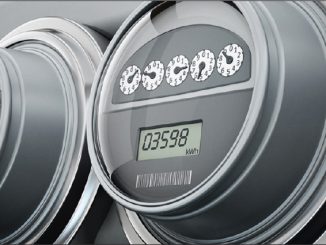