Even though the aggregate technical and commercial (AT&C) losses in the distribution segment have declined over the past few years, these losses vary widely across states and continue to pose a challenge for the discoms. Given the importance of loss reduction and revenue protection in improving discom health, several policy and regulatory steps have been taken in the sector to address these challenges. The government’s flagship distribution schemes, the Deendayal Upadhyaya Gram Jyoti Yojana (DDUGJY) and the Integrated Power Development Scheme (IPDS), are aimed at supporting discoms in tackling infrastructural inadequacies in the distribution network. Meanwhile, the Ujwal Discom Assurance Yojana (UDAY) has fixed targets for improving not just the financial, but also the operational performance of the discoms. Apart from these schemes, discoms on their part are taking proactive steps to deploy new technologies for metering, improve billing and collection systems, combat pilferage, etc.

A look at some of the major initiatives in the segment…

Utilities have taken several efforts on the metering front in order to mitigate the problems of high AT&C losses and power theft. A range of electronic meters including single-phase meters, three-phase whole current meters, high tension (HT) tri-vector meters and three-phase low tension (LT) meters with current transformers (CTs) are being deployed by utilities to replace old manual meters. Under the IPDS and DDUGJY schemes, nearly 24.5 million electronic meters have been sanctioned, entailing a total investment of Rs 59.8 billion.

Single-phase meters can handle loads of up to 5 kW and have a pilfer-proof box with a port facility that enables the downloading of parameter readings. For loads up to 15 kW, three-phase whole current meters can be deployed, which possess similar properties. Both the meters have sealed meter-terminal blocks and pilfer-proof boxes, which prevent any tampering with the core components.

The HT tri-vector meters handle loads above 37 kW and use CTs and potential transformers (PTs) with high accuracy. CTs and PTs scale down the current and voltage to safer and manageable levels, and therefore serve as safety measures for individuals dealing with these meters at the ground level. Another advantage of correctly sized CTs and PTs is that they prevent overloading, thereby ensuring revenue protection. The three-phase LT meters also deploy CTs and are used for loads up to 40 kW. The meters are enclosed in a pilfer-proof box that contains separate chambers for the meter and CTs.

Further, the utilities are installing smart meters  to identify and reduce instances of energy theft more efficiently. As per the MoUs signed by the states under UDAY, smart meters with a consumption of more than 500 units per month were scheduled to be installed by December 31, 2017, and those with a consumption of over 200 units per month by December 31, 2019. 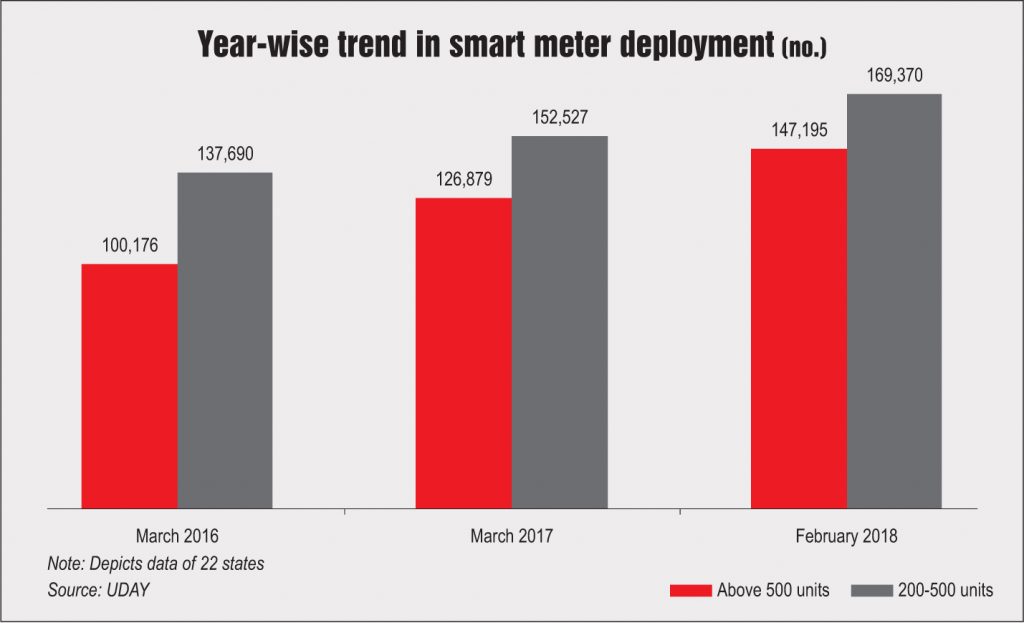 However, the implementation has been slow with only 3 per cent of the targeted consumers covered so far under the 500 units and above category and 1 per cent in the 200-500 units category. That said, smart meters have the ability to detect and alert utilities to instances of tampering and other cases of non-performing meters, and are expected to play a key role in revenue protection.

As per the UDAY dashboard, DT metering in urban areas stands at 57 per cent whereas rural DT metering is at 48 per cent. Though DT metering is much below the desired levels, the progress should not be overlooked. As of March 2016, the total number of urban DT meters for the 24 states stood at 717,982 and increased to 862,827 by December 2017, an increase of 20.17 per cent. Among states, Gujarat and Karnataka recorded the highest installations. Gujarat installed 21,989 DT meters in urban areas as of September 2017, against the target of 13,950. It was followed by Karnataka. which installed 6,001 urban DT meters against the target of 5,938 meters. In rural areas too, Gujarat occupied the top spot in DT metering. The state installed almost 281,376 rural DT meters against the targeted 100,638 meters by September 2017.

To address these issues, emphasis is being laid on ensuring accurate meter readings. Several discoms have introduced spot billing with hand-held devices for single-phase meters. For three-phase meters, the discoms have adopted measures such as remote meter reading, spot billing and kVAh billing. In addition, officers have been employed to record reasons for unusually high or low consumption levels, in an attempt to identify any cases of theft or meter tampering.

Utilities have taken steps such as periodic checking of multiplication factors in the CT and PT meters and data analytics driven sample checking, etc. In addition, they have deployed meters equipped with anti-theft features such as hardware calibration lock, sensors and welded covers. Accurate customer mapping is being undertaken by a few utilities to ensure that the right number of consumers are billed, and on a timely basis. Further, discoms have been employing measures such as sending bill payment reminders to the consumers prior to the bill due date, disconnecting the connections of consumers that falter on their bill payments, ensuring that meter reading and billing happen on the same day, and generating a list of defaulting consumers, particularly in rural areas. Pre-paid metering of all the government services offered to the consumers and earmarking certain days of the month for revenue collection are other measures that have been taken to reduce operational inefficiency.

In addition, discoms have been encouraging digital payments by launching mobile applications or web portals for billing purposes. A few utilities have also collaborated with village-level selfhelp groups for revenue collection and theft tracking.

On the whole, the government is committed to reducing the financial burden of discoms and improve their operational performance through better metering, and enhanced billing and collection efficiency. While state discoms have been making concerted efforts to increase digitisation, there is scope for further improvement. This would eliminate the need for human-interface in consumer-facing functions such as metering, billing and collection. Given the efforts being made in the segment, the outlook for the state discoms seems positive. 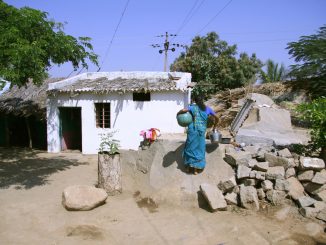 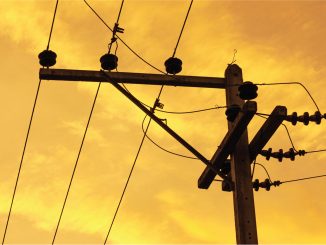 February 13, 2018
In a bid to reduce aggregate technical and commercial (AT&C) losses and improve their operational efficiency, various [...]
More