In March 2017, the Cabinet Committee on Economic Affairs approved amendments to the Mega Power Policy 2009, providing a five-year extension to mega power projects to sign long-term power purchase agreements (PPAs) to avail of the promised customs and excise duty benefits on plant equipment. Of the 25 power plants totalling 32,330 MW of capacity (28,730 MW coal based and 3,600 MW gas based) eligible under the scheme, only 11,000 MW of capacity has been commissioned and the remaining is stranded with a lack of PPAs. The policy was due to end on March 31, 2017, but has now been extended up to 2022. During this period, developers are required to keep fixed deposit receipts or bank guarantees alive.

Besides extending the timeline for signing PPAs, the amendment allows projects to avail of tax benefits on a pro rata basis against the quantum of capacity tied up under PPAs, once the specified threshold is commissioned. The money realised by the developer, as a result of the release of the proportionate bank guarantee, will first be utilised towards the repayment of bank dues. A suitable mechanism for the release of a proportionate bank guarantee will be framed by the Ministry of Power, in consultation with the Department of Revenue, Ministry of Finance.

The Mega Power Policy was released in 2009 to address the issue of shortfall in the installed capacity to meet the country’s power demand. The policy accords a mega status to inter-state thermal power plants (TPPs) of over 1,000 MW (over 700 MW in special states) and the inter-state hydro plants of 700 MW (over 350 MW in special states), providing them tax benefits including zero customs duty, deemed export benefits and income tax benefits. Originally, the projects were required to tie 85 per cent of the capacity under long-term PPAs to avail of incentives up to March 31, 2014. However, later in 2014, the policy was amended mandating developers to tie up at least 65 per cent of the installed capacity/net capacity through competitive bidding and 35 per cent under regulated tariff of the host state under a long-term PPA up to March 31, 2017.

The amendment to the mega policy is expected to provide a fresh lease of life to roughly around 21 GW of mega power projects under various stages of implementation. In the absence of the amendment, the developers would have required additional debt or the sponsors to inject equity to settle bank guarantee obligations. As per the industry experts, extension in the time frame will help the projects unlock benefits of over Rs 100 billion, providing incentives ranging from Rs 3 million to Rs 4 million per MW. This will enable the developers to competitively bid for PPAs. Besides, availing of mega policy benefits proportionate to tied-up capacity would facilitate easing out liquidity crunch fairly fast. Some of the key beneficiary companies of the policy include GMR Chhattisgarh Energy Limited, Monnet Power Corporation Limited, Lanco Power Limited, Essar Power Jharkhand Limited, Jindal India Thermal Power Limited, Hinduja National Power Corporation Limited, IL&FS Tamil Nadu Power Company Limited and Torrent Energy Limited.

One of the challenges facing of power plant developers in availing the full benefits of the scheme is unwillingness of state discoms to sign long-term PPAs. Most states have become averse to buying power on a long-term basis as short-term tariffs have drastically come down, especially with e-bidding for short-term procurement. Besides, in the recent past, the poor financial health of discoms has significantly hampered their power off-take capabilities. However, with the Ujwal Discom Assurance Yojana, improvement in the health of the distribution segment is expected in the coming years. 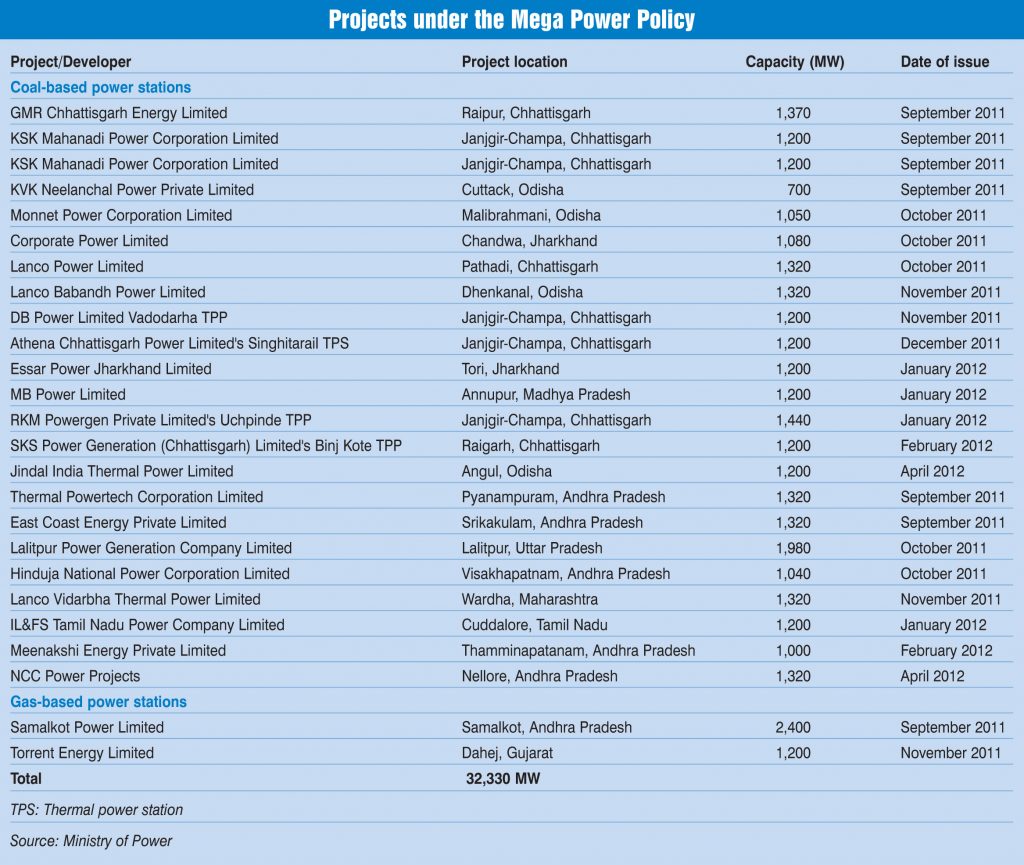 Benefits for the banking sector

The amendment in the mega policy is expected to yield significant benefits to the banking sector, reducing their contingent liabilities and freeing up banking limits of the projects. As per India Ratings & Research’s estimates, the banking sector’s exposure to the power sector is expected to be lowered by around 3.5 per cent or Rs 40 billion, providing additional headroom for lending. Further, as almost one-third of the project capacity of these 25 projects is tied up under long-term PPAs, the developers can now release bank guarantees in proportion to the tied-up capacity .

To conclude, the amendment to the mega policy is a breather for independent power producers, considering the large number of stressed TPPs in the country. Lowering the cost of power generation would increase the competitiveness of private players. Besides, this is a vital move for meeting the growing power demand in the country, especially in light of the government’s plans to ensure 24×7 power supply and achieve full rural electrification.