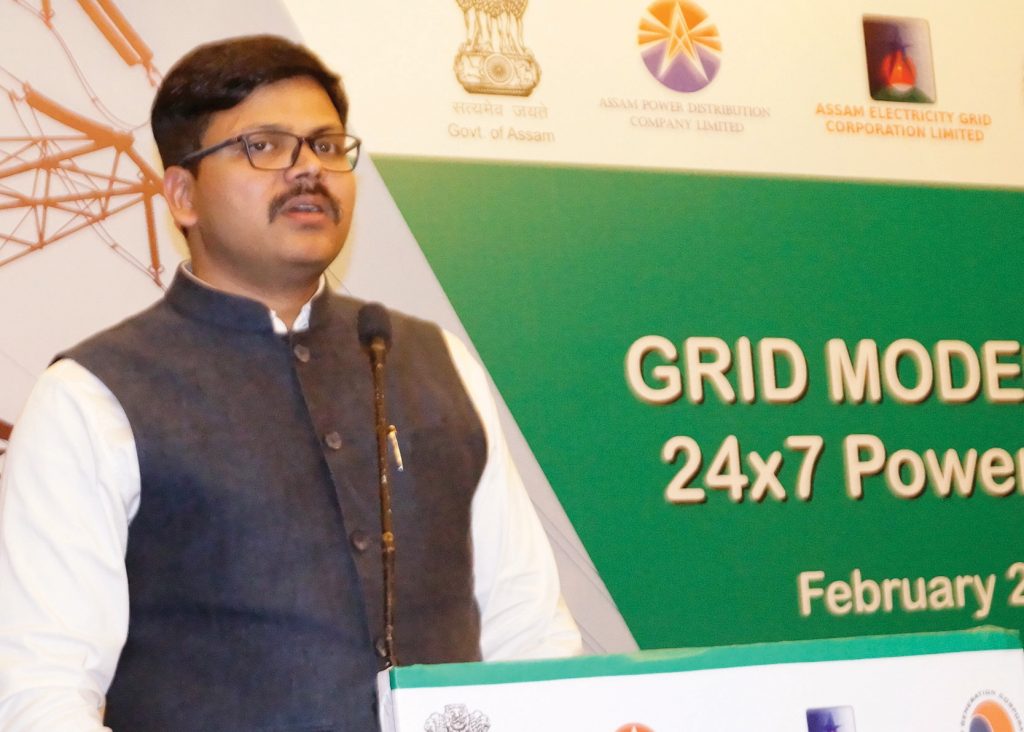 State discom Assam Power Distribution Company Limited (APDCL) is the sole distribution licensee in Assam, serving a consumer base of more than 3.3 million. The discom has made significant strides in ensuring power availability and electrifying villages in the state. However, its aggregate technical and commercial (AT&C) losses remain worrisome. At the workshop on “Grid Modernisation in Assam”, Puru Gupta, managing director, APDCL, shared his perspective on the discom’s upgradation plans, including initiatives for promoting solar power, smart metering and loss reduction. Excerpts from his address…

A smart grid was earlier understood to be a grid with significant IT solutions integrated into it. However, once the National Smart Grid Mission got under way, the understanding of a smart grid improved. Smart metering was taken up under the mission. Subsequently, a smart grid was understood as one that included not just smart metering but also control systems like SCADA (supervisory control and data acquisition), which could enable monitoring feeders through a centralised screen and controlling them at the click of a button.

Today, however, the smart grid is not only about a lot of IT solutions, smart meters or SCADA systems. With distributed generation, or distributing energy resources (DERs) as the West calls it, coming into the picture, a smart grid is now a lot more. We have a large number of small generators, usually solar based, which feed energy into the grid. They pose new challenges to the grid. Earlier, there were only unidirectional energy flows in the grid. With the consumer now becoming a generator, we need to make provisions for bidirectional energy flows in the grid.

There is also the issue of variability, which has come in with greater penetration of renewable energy sources. Let’s say Assam’s solar capacity increases to 3,000 MW in the coming few years, making the state heavily dependent on solar. This will present new kinds of challenges. In the event of, say, a cloud cover, a significant proportion of solar energy may go away from the grid. Therefore, there will have to be compensatory and balancing mechanisms in place. We will need to fire our conventional generating stations and enable them to cope with these changes.

A modern smart grid is, therefore, one which would have a significant amount of IT, equipment and instruments, as well as one that has commercial mechanisms such as time-of-day billing to cope with variations in load. It would also need to embrace the changes that are evolving in the power sector.

The modernisation of the grid is an inevitability and its economics prevails over other aspects. Our pilot projects in Guwahati and SCADA projects are close to completion now. We hope to expand the understanding and adoption of these projects to other cities and towns of Assam.

In Guwahati, we are installing around 15,000 smart meters. There have been a few challenges on the execution front, but we hope to complete that project soon. Our understanding of smart metering has grown over time. However, this has also resulted in confusion in terms of the most optimum technology to deploy, given the vast number of choices. We hope to take smart metering to the next level. We do not want to restrict ourselves to just 15,000 meters and plan to expand coverage in various cities over the next couple of years.

We also intend to deploy SCADA in a few more towns other than Guwahati. Currently, we have about 23 substations that are already live and connected. The reliability of SCADA is not yet 100 per cent, but we are getting there. We are also overhauling our infrastructure to make it more robust and have various arrangements, such as mesh networks, to ensure that outages are minimised. We also hope to bring about greater consumer awareness regarding concepts such as brownouts and load shedding.

Our proposals are actually still at the planning stage. This will also depend on sanctions from our funding sources such as central government funding under its flagship programmes like the Integrated Power Development Scheme, the Deendayal Upadhyaya Gram Jyoti Yojana, and external aid. By 2022, we hope to get around Rs 30 billion. However, this is only a ballpark estimate; the actual amount will be known only when we get into the implementation phase, preparation of detailed project reports, etc.

The main focus area would be reducing our losses. Going by the trends in the past three to four years, the decreases have been marginal. The reasons for this are our high power purchase costs, the large number of consumers at low voltage levels, among others. Also, our network’s low tension-high tension ratio needs to improve. Our distribution losses are around 17 per cent. Transmission losses are another 5 per cent. We need to work hard to bring these down. We have planned to go ahead with high voltage distribution systems on a large scale. We are doing a pilot first to assess the feasibility.

In the renewable energy sector, we have made a beginning. Our rooftop solar project is going to commence soon. In fact, we have done a couple of pilots in Assam and have now developed a fairly good understanding of this segment. A survey by GIZ of Germany on the impact of rooftop solar on Assam’s infrastructure has shown positive results.

We have also signed a power purchase agreement (PPA) for 100 MW of power. Another 100 MW will probably come soon if the rates from the Solar Energy Corporation of India are favourable. We have tendered another 100 MW of solar power projects across Assam.

We are planning for renewables to be fed into the grid in a big way over the next one to two years. We may have to resort to mechanisms like banking during the day, as even now we are selling off-peak power through the exchange. Additional solar power during off-peak hours will not be advantageous to us, except in helping us meet our dues.

This is an area of concern for us. IT and proper communication connectivity are important to ensure that meaningful data can be derived from smart meters. Under the Restructured Accelerated

Power Development and Reforms Programme, we installed a large number of meters, but many of them have become defective. A lot of analysis from the data coming in from the meters is possible. However, this is not happening as on date. We really need to build on it.

We have recently taken steps to improve our research and development (R&D) capability. We are trying to adopt an approach that entails the adoption of the latest and best technologies in the market today. We are also trying to standardise our designs, processes, etc. Our people in the technical development cell have already started work in right earnest towards this. We have two departments/wings that are responsible for this – the project management division and the chief engineer’s headquarters. We are making a beginning and we hope to create something that would last and set an example for other discoms to follow.