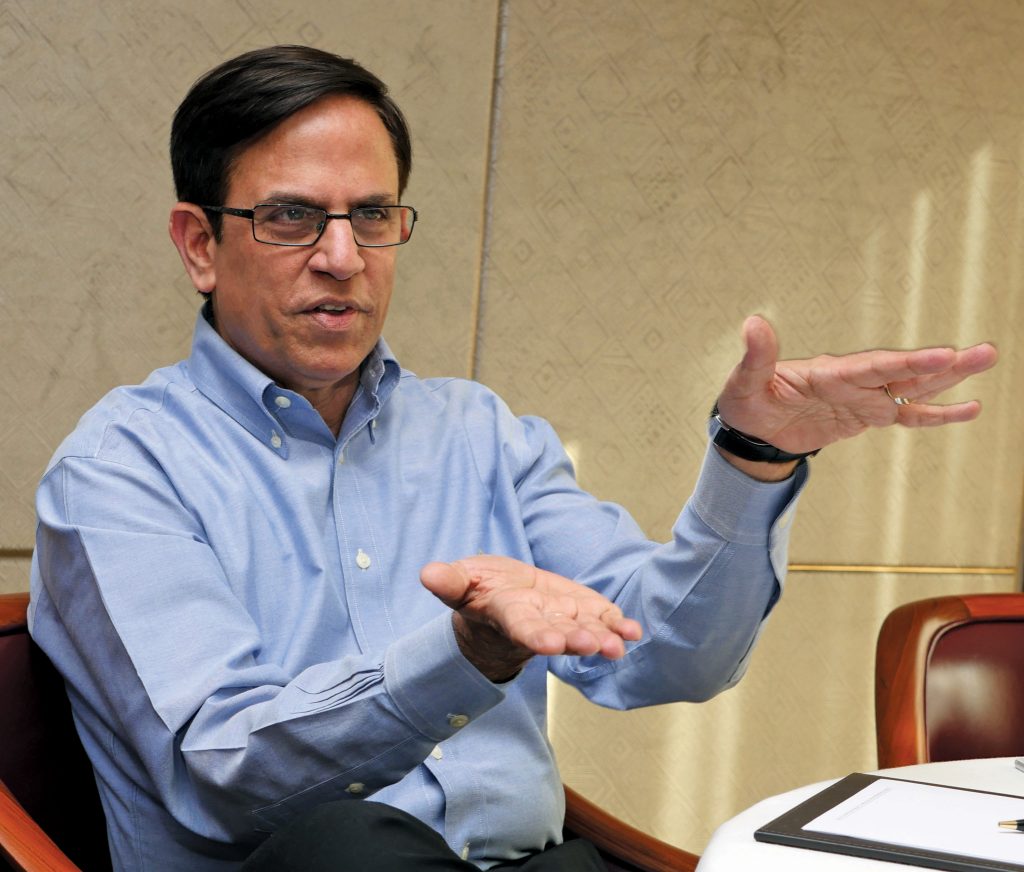 In a candid conversation, J.P. Chalasani, Group CEO, Suzlon, talks about his power sector journey, through the public and private sectors, in the conventional and renewable energy domains…

Tell me something about yourself that those in the industry who know you have no idea about.”

That question starts the Power Line interview with industry veteran J.P. Chalasani, group CEO, Suzlon. He pauses to reflect. There’s not a sound in the Belvedere Suite at the newly renovated Oberoi hotel in New Delhi. “Well, everyone knows I love cricket, but something they don’t know about me at all…?” he asks.

He pauses a bit longer, then reveals a modest failing. “People think after so long in the industry I must know everything about it, but even after all these years, I don’t understand many parts of the industry because it is very complex. I always tell people that if you move one lever, there are four or five levers that move without your knowledge,” he says.

Then a vice, albeit tiny. “I never read fiction. I don’t think I’ve read more than half-a-dozen novels in my life,” he admits.

Finally, he turns to the most important thing in his life that those who know him and have worked with him over a career spanning more than three decades probably do not know. “I am very spiritual,” he says. By “spiritual” he does not mean that he follows rituals or visits a temple every day. Nor does he follow a guru. He means that he prays every morning and evening, and turns to God for sustenance, comfort, guidance and strength. “This has been a constant feature of life since my early 30s. My experience has shown me that if you believe in God and put in your best efforts, He will be there to help you. I have been helped on innumerable occasions by this belief. It has helped me manage stress and ride through difficult moments in my life,” he says.

The interest in spirituality and personal growth started because he used to be a very anxious person. He began reading self-help books when he was 34. But earlier, in the 1970s, he read the bestseller, Born to Win. But this was followed by a gap. It was only 10 years later that he developed an abiding interest in self-development books, beginning with Norman Vincent Peale’s Stay Alive All Your Life. The book had a great impact on him (he read it four times). Chalasani finds them valuable, uplifting and enriching.

For someone who has seen it all and done it all, Chalasani remains very enthusiastic about work and the power sector. He joined Suzlon in 2016, bringing to the organisation all the depth and range of his experience, project management skills and people management expertise. What keeps him excited is that the power sector is never without challenges.

“Even after more than three decades, I still see lots of challenges – and opportunities – and that’s what keeps me going. I always tell this story at forums…. When I joined the industry as an NTPC trainee, the power secretary told us that the industry faced three challenges: low PLFs, high T&D losses and discom ill-health. In different ways, we are still talking about them today,” he says.

The fact that he left the conventional power industry where he had worked all his life to take up renewable energy at Suzlon demonstrates that he is undaunted by challenges. It would have been so easy, after being head of Reliance Power, at the pinnacle of his career, to have remained in that sector. But he had heard of Pune-based Suzlon and had great respect for its founder, Tulsi Tanti, long before he joined.

When he joined Suzlon, it was passing through a turbulent time. He liked the idea of turning it around. He went in with his eyes open, knowing not only the scale of the challenge but also the effort that would be required, given that both wind and solar were totally new to him. In his first year, the company did 1,769 MW, the highest ever by Suzlon in a single year.

But from early 2017 to the present has been more difficult. The policy shift to auctions at the beginning of 2017 unleashed more turbulence. The challenge was to stay afloat and not drown in debt. “Suzlon is an integrated wind company, unlike others. We do everything – from getting the land to the very last stage. When you have such an integrated company and volumes shrink, you get hit because your costs are fixed and you are hit across the value chain. And we did get hit,” he says.

The company had to generate sufficient cash to service its debt. The whole of last year was spent slashing costs and managing cash flows so that, at the end of the financial year, there was no default on debt. The company managed this and still retained market leadership. Now, says Chalasani, the order book is looking good. But though it has volumes, prices are coming down and margins will be under pressure. “So internally, we need to bring in more efficiency to protect our margins by reducing fixed costs as well as manufacturing costs,” he says.

The fit between Chalasani and Suzlon has worked. He talks with pride of how the company operates more than 17,000 MW across 18 countries. Of this, over 11,000 MW is in India. Gradually, the company plans to become more ambitious internationally. Two years into the job, he has settled in. “When you switch jobs, especially at the leadership level, it is always challenging for the first couple of years. People look at you with apprehension. You have come in from outside. You have to win the confidence of your people – and of the board. You have to re-establish yourself,” he says.

At 60, Chalasani has enjoyed a good innings. When you ask him how he accounts for his success, he mentions, with generous praise, two men who influenced and moulded both his personality and his career: NTPC founder D.V. Kapur (“a God” he calls him) and R.V. Shahi.

As a trainee engineer at NTPC, obviously Chalasani had no reason to interact with Kapur, but the latter, impressed by his project management record, asked him to join Reliance Power, where he had become chairman in 1995. “He is a great personality, professionally and as a man,” he says. “I didn’t just learn about the industry from him. I learnt how to live well, dress well, how to see the world, how to eat well. He has a great zest for life and it made a powerful impact on me. He made me realise that success in life is more than only about work. Everything I know, I learnt from him.”

Another extraordinary personality to affect Chalasani’s career was Shahi, who taught him an important lesson, namely, that it is not knowledge that helps you manage a situation but common sense. “The way he asks questions, the way he drives at what he needs to know to find a solution, all based on common sense, is fantastic, not to mention his time management and project management skills,” he says.

Shahi was also responsible for Chalasani leaving NTPC to join the private sector. Shahi made him realise that he had to move on and that the difficulty with the public sector was that, at a senior level, the process becomes more important than the outcome.

Chalasani was 38 when he took the plunge and left NTPC. Luckily his wife, Rajani, supported him and even, surprisingly, his parents, who felt that a calculated risk would bring rewards. He has never looked back. “Shahi, along with Kapur, is still my mentor today. Whenever I face a difficulty, I turn to one of them,” he says.

The secret to good project management, he believes, is common sense: to be able to understand why things are not happening, to create a culture of stock-taking so that everyone is aware of where things stand, and motivating people by creating an atmosphere that is not tense, but not too light either. “The key is to get people attached to a project, to take ownership of it so that they feel guilty if they can’t deliver. Once you’ve managed that, they will do what needs to be done. And that only happens if they know you are committed to them.”

For relaxation, Chalasani turns to his family. He describes himself as an essentially introverted person, who prefers to be at home than socialise or attend functions. Rajani, their daughter Manasa and son Aditya form a tight unit. Chalasani expresses regret that Rajani, when they got married, gave up her job as a lecturer to become a homemaker. What salves his conscience, he says, is that she took up painting and has been successful at it, holding exhibitions of her work.

When he looks back at his career, Chalasani sees accident, not destiny; chance, not design. He feels that things just happened to him “beautifully”, without his planning anything. He stumbled into project management at NTPC where he spent 16 years, just because he thought it might be “good”. That led to perhaps the 10 best years of his life, building the Ramagundam power plant, getting married and raising his children.

Then Shahi said, “enough of project management, come to NTPC regional headquarters in Hyderabad to get a bigger picture”. He went. Later, he had the opportunity to move to Delhi as special technical assistant to the CMD.

Then at 38, he jumped headlong into the private sector, joining Reliance Power. In 2008, he became CEO and during his tenure, the company won three ultra mega power projects worth Rs 200 billion each, and Reliance Power became the largest market cap company in power.

A year after leaving Reliance Power in 2013, he joined Punj Lloyd where he spearheaded the global, diversified operations and led the management team. And then, of course, the bold switch to Suzlon and a different form of energy. “There was no design in my career, no planning. It just happened. I have a zeal for life. I like every single day. I am an eternal optimist. For me, the glass is always half-full,” he says, adding, “to the point where sometimes my family gets irritated with me”.