According to a new report by the Parliamentary Standing Committee on Energy, there are as many as 34 thermal projects with a capacity of over 40 GW in the sector that are categorised as non-performing assets (NPAs) or financially stressed assets.

In its report, “Stressed/Non-performing Assets in Electricity”, which was tabled in Parliament recently, the committee states that almost 24.4 GW of commissioned projects and 15.7 GW of upcoming projects which are stressed, have a cumulative outstanding debt of Rs 1,744 billion. The stressed thermal power plants (TPPs) include those of power majors Adani Power, Essar Power, Lanco and Jaypee Power.

Given the magnitude of the problem, a number of recommendations have been made to improve the situation. These include a review of the strategic debt restructuring (SDR) guidelines, a revision of the National Electricity Policy and a more realistic implementation of the Reserve Bank of India’s (RBI) revival schemes.

Power Line takes a look at the report’s key highlights…

The Economic Survey 2016-17 had highlighted the twin balance sheet challenge and stated that companies do not have adequate earnings to pay interest on loans from banks. As a result, the loans became NPAs, necessitating banks to intervene and make substantial provisions to address the issue.

In line with this, the Standing Committee on Energy was provided a list of 34 stressed coal-based TPPs after being identified by the Department of Financial Services. The committee defines stressed assets as accounts where there has been a delay in the payment of interest/principal by a stipulated date, as against the repayment schedule, because of financial difficulties faced by the borrower. Subsequently, such accounts have been taken up for corrective action plan by the banks in order to rectify, restructure and recover these amounts.

According to the committee, the main reasons for the stress in most of the TPPs are: non-availability of fuel, cancellation of coal blocks, setting up of projects without linkages, lack of adequate power purchase agreements (PPAs) by states, promoters’ inability to infuse equity and working capital, contract/tariff-related disputes, issues related to banks/financial institutions, and delay in project implementation, leading to cost overruns and aggressive bidding by developers to secure PPAs. Of the 24 GW of commissioned capacity that is stressed, around 8.2 GW of projects do not currently have PPAs. Of the upcoming projects, nearly 7.7 GW of projects do not have linkages while 3.8 GW of projects have issues with the coal blocks allotted. 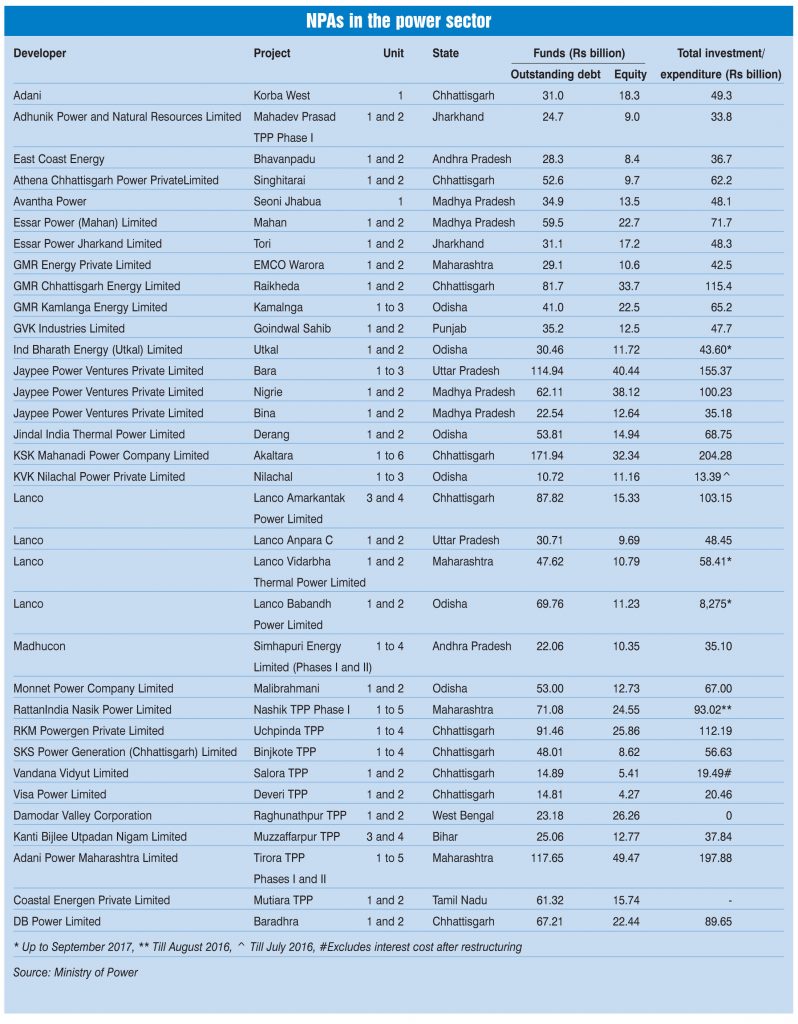 The committee has recommended setting up an appropriate task force to bring independent power producers (IPPs) out of the NPA mire in order to achieve 24×7 power for all and provide an impetus to power generation in the country. It has noted that since the stability of the sector depends on many segments, efforts are required by all concerned agencies to convert NPAs into productive assets.

There are various factors responsible for an asset becoming an NPA besides delayed project implementation. Therefore, charging of penal interest rather than supporting the assets exacerbates the situation. Thus, the committee suggests that lenders should allow a period of 90 days to elapse before classifying an asset as an NPA and should be guided by their own norms for charging interest rather than following the grading of assets by rating agencies. Moreover, it suggests that the process of granting a loan, supervising and subsequent monitoring needs to be revised. It has further recommended that RBI should advise all commercial banks to follow the credit rating system proposed by the government for assessing the credit risk of infrastructure companies and prescribe risk weight accordingly.

With respect to the issue of coal shortage, the committee has recommended that Coal India Limited (CIL) should provide the required quantity of coal to every developer in a time-bound manner. Further, it has mentioned that CIL should look into the issue of proportionate reduction in royalty and taxes. The committee is of the view that domestic coal should be used as much as possible as it is economical, and that the government should not put any restriction on coal imports for power projects, if carried out in a transparent manner.

Given that stress in the sector has also been caused by various operational/regulatory issues, the commission recommends that appropriate steps should be taken to maintain uniformity and consistency in case of any situation arising out of “change in law” events. Further, the committee envisages that the inter-ministry group created by the government will set out specific practical remedies to deal with different challenges plaguing the sector. The committee further notes that the National Electricity Policy needs to be revisited to bring suitable amendments at a policy level. It also states that the revival schemes of RBI or the government should be realistic and should prevent projects with huge investments from becoming NPAs.

With respect to SDR as a solution, the committee has strongly proposed that the SDR guidelines should be reviewed and changes in management should be considered only when negligence is established on the part of management for the stressed situation of the project. Lastly, the committee has advised that the government should phase out old power plants as expediting this process will allow upcoming stressed power projects to become standard assets. The optimal utilisation of resources will not only benefit the power sector but will also significantly reduce the financial burden on the banking sector.

The report comes at a crucial time when the new RBI guidelines pertaining to stressed projects have emerged as a key concern for the industry. As per the revised RBI guidelines, even a one-day default in debt repayment for accounts with an exposure of more than Rs 20 billion would result in the implementation of a resolution plan. The apex bank has discontinued programmes for banks to restructure their defaulted loans such as corporate debt restructuring, sustainable structuring of stressed assets and SDR, and made the Insolvency and Bankruptcy Code as the main tool to deal with defaulters.

Power producers have sought a relaxation in these guidelines, stating that the sector is facing problems that are beyond the control of developers and that the new guidelines could impact close to 75 GW of assets. This month, the power minister met IPPs to discuss these issues, reassuring producers that their concerns would be examined and suitable action taken in consultation with the concerned departments to strengthen the power sector.