The renovation and modernisation (R&M) of power plants is essential for maintaining their operational performance. Ageing infrastructure and increasing operational stress on the equipment leads to a significant deterioration in plant performance. Besides, in recent times, power plant owners have been preparing themselves for flexible plant operations owing to large-scale renewable energy integration into the grid. Through R&M interventions, the performance of traditional baseload plants can be maintained even under flexible operations. Further, modernisation and upgradation of thermal power projects is required to meet the tightened emission norms. In the hydropower segment, R&M can help in quickly adding capacity and improving plant reliability.

However, in India, R&M has failed to gain the desired momentum owing to a host of issues and challenges such as the lack of experienced contractors, technical surprises, scope creep and financial constraints. According to data furnished by the Central Electricity Authority, in the coal-based segment, a total of 37 units aggregating over 7.2 GW of capacity were taken up for R&M and life extension (LE) works during the five-year period 2012-17. This was significantly lower than the 135 units aggregating 29 GW identified for R&M during this period. Meanwhile, in the hydropower segment, R&M, LE and uprating works for 21 hydroelectric plants (HEPs) aggregating 4.1 GW were completed during the same five-year period, as against 4.8 GW and 4.3 GW of plants undergoing R&M during the Eleventh (2007-12) and Tenth Plan (2002-07) periods respectively.

The need for R&M/LE arises with the ageing of plant infrastructure, policy modification and technological obsolescence. Typically, the plant equipment is designed for a fatigue life of 25-30 years. High temperatures in power plants lead to fatigue and creep in the equipment. Sometimes the equipment also becomes prematurely weak due to operational stresses like frequent temperature and pressure excursions, full load tripping, frequent start and stops, etc. In order to ensure reliable plant operations, the useful remaining life of the plant needs to be assessed after 20 years of operation as a preemptive measure against serious failures. This is done through residual life assessment (RLA) studies, which entail non-destructive and destructive tests of plant equipment to evaluate its future performance. If the plant condition demands, RLA may even be carried out after 15 years or 100,000 hours of operation.

The declining trend in the plant load factor (PLF) has been a cause for concern for the sector. Between 2012-13 and 2016-17, the average thermal PLF in the country declined by 10.3 percentage points, from 69.9 per cent to 59.8 per cent. Apart from subdued demand from power discoms, the declining PLF can be attributed to inefficient power generation, increase in coal consumption, technological obsolescence, lack of fuel, etc. Meanwhile, the age of a plant has a significant impact on its performance. According to industry estimates, the generation capabilities of a thermal power plant (TPP) are reduced by about 40 per cent post 25 years of operation.

The operational life of HEPs is 30-35 years, beyond which their generation capacity reduces. In addition, forced outages have a direct bearing on power plant generation and these increase with the age of the plant. As per the latest available data with the CEA, hydropower generation witnessed a year-on-year decline of 7.6 per cent and 5.1 per cent in 2016-17 and 2015-16, respectively. Around 46 hydro stations or 23 per cent of the total installed hydropower capacity had an operational availability of less than 85 per cent. During 2016-17, the forced outages for hydro power stations stood at 3.33 per cent.

In view of the high cost of setting up new plants, the poor financial health of the utilities and growing environmental concerns, maximising generation from the existing power stations through R&M and LE is the need of the hour. R&M of old power plants is a cost-effective solution for augmenting power generation. R&M programmes have a shorter gestation period as compared to setting up of new plants. Besides, R&M entails minimal rehabilitation and resettlement (R&R) issues. In TPPs, R&M improves the heat rate, reduces auxiliary consumption, lowers emissions and ensure optimal fuel utilisation.

In recent times, a key growth driver for R&M has been the tightened emission norms notified by the Ministry of Environment, Forest and Climate Change in December 2015. This requires installing/ retrofitting various technology solutions such as electrostatic precipitators (ESPs) (for particulate matter norms), flue-gas desulphurisation systems (for sulphur oxide emission norms), and selective non-catalytic reduction and selective catalytic reduction systems (for nitrogen oxide emissions). Undertaking R&M of the emission control equipment also helps in reducing the emission levels. For instance, industry estimates suggest that R&M of ESPs could help in meeting the new particulate matter norm of 100 mg per Nm3.

Another emerging application of R&M pertains to  the flexibilisation of TPPs. With increasing penetration of renewable energy, maintaining grid stability and security has become challenging. For a robust grid, balancing load and generation on a continuous basis is essential. Flexible operation requires frequent and rapid ramp-up and ramp-down of power plant capacity. While power plants operating on supercritical technology offer flexibility in operations, old power plants experience severe deterioration in performance under flexible operations. The performance of power plants under flexible operation can be maintained through R&M of plant equipment. This includes reduction in the mill size, increase in the number of mills, installation of advanced burners and indirect firing systems in boilers, use of special alloys for improved material strength, etc. 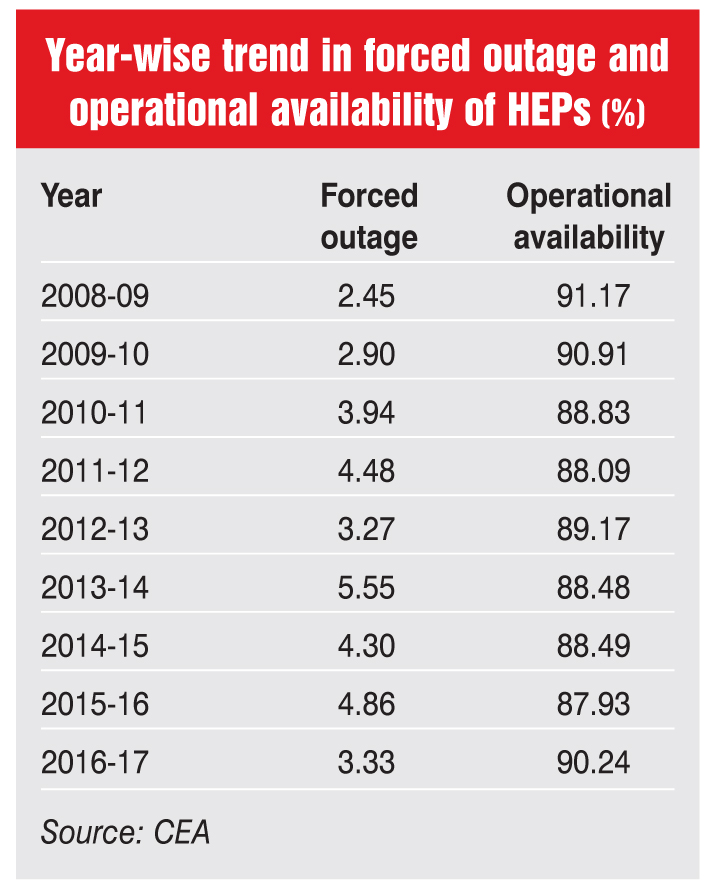 A number of challenges are faced by power plant developers while undertaking R&M and LE works. One of the key challenges is the paucity of experienced firms and contractors for undertaking RLA studies and performing R&M works. Participation in R&M is hampered by highly skewed risk-benefit share in the contractual agreement, lack of properly defined scope of work, etc. In order to promote the R&M market, it is essential to award R&M projects through fair, transparent and competitive mechanisms, and develop public-private partnership models for the purpose.

Further, technical surprises in a plant lead to scope creep, cost escalation, delays in completion of work, quality deviation and contractual disputes. To avoid this, it is important to ensure data monitoring, robust reporting and maintenance, adequate assessment, minimum time lag between technical studies (RLA, detailed project report preparation, etc.) and the actual award of contract and the commencement of R&M work. Further, difficulty in controlling the scope of the project, and tight timelines and budgets cause delays in the completion of R&M.

To conclude, there is an urgent need to undertake the R&M of older power plants in the country at a faster pace for efficient power generation and optimal utilisation of the resources. To this end, utilities need to prepare a roadmap. Further, adequate regulatory support is needed to achieve the desired results. That said, utilities need to have effective operations and maintenance practices in place. R&M needs to be adopted as a one-time approach and not as a substitute for regular maintenance.