Green shoots in power procurement seem to be finally emerging. In 2017-18, the pan-Indian demand by state discoms went up to 1,212 BUs, which was 6 per cent higher than the previous year. Large states in particular saw significant increases in their power demand during the year. These included Telangana (13 per cent increase in demand), Uttar Pradesh (11.5 per cent), Gujarat (6 per cent) and Madhya Pradesh (5.8 per cent).

Even as these numbers are enthusing industry watchers, recent policy efforts are also sending positive signals on demand picking up further. The power ministry recently launched a pilot scheme for centralised procurement of 2,500 MW of power capacity for a period of three years through a competitive bidding process. As per the scheme, power trader PTC India will sign power purchase agreements (PPAs) with the winning bidders and back-to-back power sale agreements with the state discoms.

With almost a near absence of long-term contracts in the power market during the past few years, this scheme could break the impasse, say industry watchers. “States that are major procurers of power have shown keen interest in this scheme,” says Dr Rajib K. Mishra, director, PTC India.

The scheme could trigger more PPAs in the market as the terms in the bidding documents are in favour of the state discoms, with fixed costs of power procurement having been almost completely waived. “The scheme appears favourable for the distribution utilities, by virtue of mostly the “single-part nature” of the tariff, with the fixed capacity charge being kept at a nominal 1 paisa per unit and the minimum contracted offtake at 55 per cent of the contracted capacity,” notes ratings agency ICRA.

Developer selection: Power generators would be selected through a tariff-based competitive bidding process.

Key agencies: PFC Consulting Limited has been designated by the Ministry of Power to carry out the bidding process for the selection of  successful bidder(s) for the implementation of the pilot scheme. Further, in order to facilitate the procurement and supply of power between the successful bidder(s) and the utilities, PTC India Limited has been authorised to act as an aggregator for procurement and supply of power from the supplier  to  the utilities, (PFC Consulting had signed an MoU with PTC India in January for exploring power procurement opportunities from coal-based power plants.)

Modalities: PTC will procure power from power stations that are already commissioned but do not have  PPAs. These stations would dedicate an aggregated contracted capacity of 2,500 MW for production of electricity and supply thereof for a period of three years.

Maximum allocated capacity: The pilot plan proposes that a single entity, which quotes or matches the lowest bid in the auction, would be allocated a maximum capacity of 600 MW.

Tariffs and fixed costs: As per the bidding documents, the quoted tariff will remain fixed for the three-year PPA period without any escalation. The fixed charge is kept nominal, that is, at 1 paisa per unit, and the variable tariff quoted by the power generator should cover the entire cost of generation and supply up to the delivery point (nearest interconnection point from the plant to the central transmission system).

Minimum offtake and penalties: The bid documents mandate that the minimum offtake by PTC would be 55 per cent of the contracted capacity. Any procurement below 55 per cent would require compensation to be given to the power generator equivalent to the difference between the tariff payable as per the PPA and daily average market clearing price on the power exchanges. However, if the price on the power exchanges is higher than the PPA tariff, the power generator will share the benefit of the higher tariff with the aggregator on a 50:50 basis.

Among other things, industry experts note that the scheme will allow states to replace their existing costlier PPAs and encourage more states to float tenders. Further, the proposal will provide comfort to discoms by waiving the fixed-cost payment if no power is procured from such plants. That said, experts note that the bids placed under the scheme could be on the higher side as the risk apportionment is skewed in favour of the utilities.

ICRA notes that this scheme is a positive development for independent power producers (IPPs) as it will provide some visibility on PPAs, given the lack of progress in the signing of long-term and medium-term PPAs over the past three to five years. However, it adds that this scheme is expected to provide partial relief to IPPs, given the medium-term nature of the PPAs proposed and the significantly high (about 26 GW) thermal capacity without long-term PPAs. About 60 per cent of this capacity is operational and the balance is under implementation. 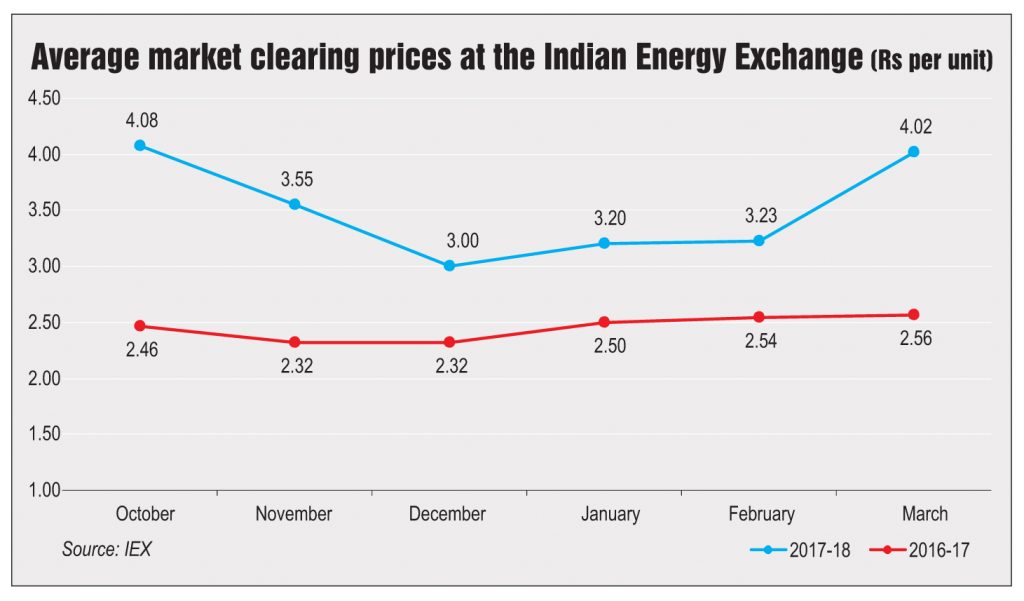 The pilot scheme comes at a time when coal shortages and rising spot power prices have put discoms in a tight spot and are adding to their monetary stress. According to data from the Indian Energy Exchange (IEX), the price of Rs 4.02 per unit in the day-ahead market in March 2018 was 24 per cent higher than the prices in February 2018 and 57 per cent above the past year’s prices (largely on account of aspects such as an increase in demand associated with seasonal variation and inadequate availability of coal with thermal generators).

A case in point is Mahadiscom, which has long-term contracts worth 19,600 MW but has only been able to secure 14,000 MW from these contracts due to the coal shortages in power plants. For the discom, the average cost of power from long-term tenders is Rs 3.79 per unit; however, the discom is incurring extra expenses by procuring power at the rate of Rs 3.94 per unit from short-term tenders (about 650 MW) and around Rs 4.68 per unit from the power exchanges (500-1,800 MW).

This is vastly different than the trend in the past couple of years wherein spot power market prices had hit rock-bottom levels, which led to discoms’ unfettered access to the power exchanges, completely shunning long-term contracts.

Spot prices are expected to continue to rise in the near term. According to CRISIL Infrastructure Advisory, “The monthly market clearing price at the IEX has spiked by around 25 per cent from Rs 3.20 per unit in January this year to Rs 3.97 in March, taking the average cost to Rs 3.43. This is significantly higher than the Rs 2.50 average logged in the corresponding period of the past two fiscals. Further, monthly peak prices on the power exchanges in 2017-18 averaged at Rs 7.10, which is almost twice the levels in 2016-17.”

“We are staring at a huge problem because the peak power deficit scenario is unlikely to improve any time soon,” says Vivek Sharma, senior director, CRISIL Infrastructure Advisory. “To boot, demand will surge afresh given that an additional 40 million households will be electrified in 2018 and 2019, and also because general elections and some state polls are imminent.

Additionally, domestic coal supplies would come up short, indicating a continued dependence on imported coal, the prices of which are expected to stay elevated. This will only push up the marginal cost of electricity further.”

So how can discoms hedge against the soaring spot prices? “We generally recommend that the state discoms tie up at least 90 per cent of their requirement through long-term and medium-term procurements as it not only gives them comfort during volatility but also results in a reasonable variable cost due to the availability of linkage coal, which is being provided under the Shakti scheme for medium-term and long-term supply to the state discoms. The states which have done this in the past are getting the benefit during an upsurge of short-term and day-ahead prices,” says Mishra. 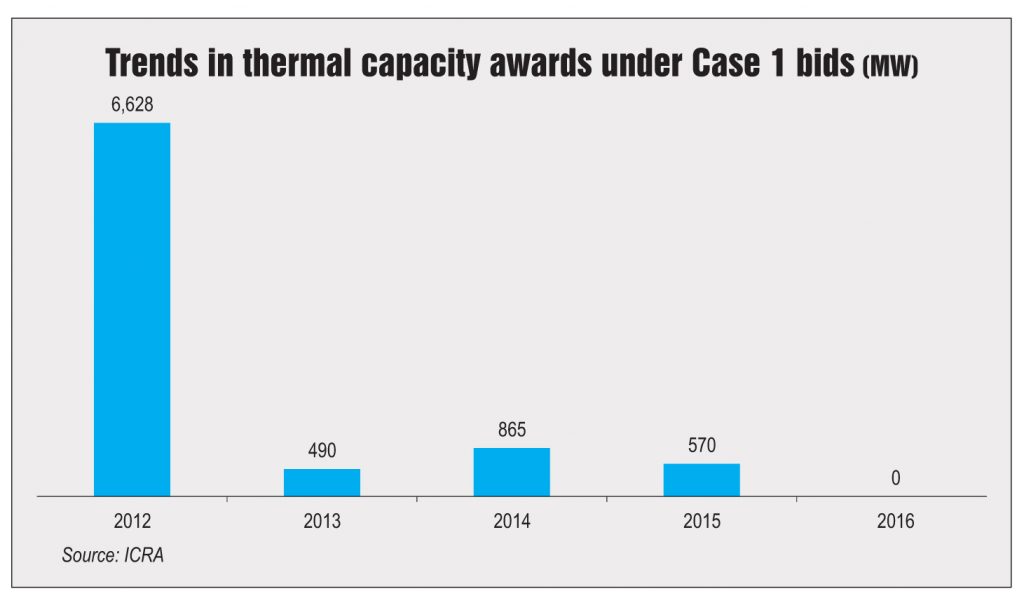 With the early onset of summer, the peak power demand touched over 161.8 GW in March 2018, which was around 4 per cent higher compared to 155.1 GW in the same month last year. With the spurt in demand, discoms are keen on looking at options for short-term contracts.

In fact, the power market has been witnessing several short-term bids in the last couple of months. For instance, Gujarat, which has been a surplus power producer till date, recently invited bids for procurement of 2,000 MW of power for April, May and June to meet the rising demand. Reportedly, during March, power demand in the state increased by 640 MW to about 14,890 MW per day. Gujarat Urja Vikas Nigam Limited (GUVNL) has a PPA of 2,000 MW with Adani Power, 1,000 MW with Essar Power Gujarat and 1,805 MW with Tata Power. However, Essar had discontinued supply from December 15, 2017 while Adani stopped supply from January 20, 2018 without any prior notice. GUVNL had purchased 600 MUs from the exchange in February 2018 at a daily average of around 21.4 MUs.

Overall, 14 bids totalling 6,340 MW for power procurement were invited by states including Haryana, Maharashtra, Uttar Pradesh, Chhattisgarh, Gujarat, Punjab and Uttarakhand, as well as by Torrent Power for supply from March to June 2018. “The surge in demand for short-term bilateral contracts has resulted in an increase in discovered prices in the range of Rs 4.20 to Rs 4.60per kWh, which is almost 30 per cent higher than the average of the last two to three years,” says Mishra. He adds that some of the key reasons behind this trend have been the increase in the prices of coal available in e-auctions and the increase in imported coal prices in the past six months by almost 32 per cent.

While it may be early to conclude that activity levels in signing long-term contracts will pick up, there is also a growing realisation that the oversupply situation will not remain for long. Net capacity additions have been reducing. While almost 3.4 GW was added in 2017-18 (till November 2017), another 2.37 GW was eliminated. If this trend continues, the power demand-supply mismatch situation could see a correction and more PPAs could materialise in the medium- and short terms.

That said, a sustained recovery in power demand is what the industry is now hoping for to help the sector get out of its mess and improve plant load factors. Whether this can be achieved through government initiatives like the Ujwal Discom Assurance Yojana, rural electrification schemes and programmes such as 24×7 Power for All is yet to be seen.