Grid modernisation and strengthening has been the core principle of various government schemes introduced in the power sector in the past couple of years. The latest among these is the Pradhan Mantri Sahaj Bijli Har Ghar Yojana (Saubhagya), launched on September 25, 2017, which has set an ambitious target of 100 per cent household electrification by March 2019. The scheme is expected to provide a major stimulus to grid network improvement and compel discoms to invest heavily in infrastructure development to meet the scheme’s targets. Besides Saubhagya, the twin distribution schemes – the Integrated Power Distribution Scheme (IPDS) and the Deendayal Upadhyaya Gram Jyoti Yojana (DDUGJY) for improving sub-transmission and distribution networks in urban and rural areas respectively – are also expected to play a key role in the coming years in facilitating grid modernisation.

A closer look at these schemes, their targets and progress till date…

The Saubhagya scheme was launched with the objective of providing electricity to every willing household in rural and urban areas by March 2019. The scheme aims to ensure last-mile connectivity to individual households, as against village electrification targeted under older electrification schemes. Saubhagya entails a total outlay of Rs 163.2 billion, including a gross budgetary support of Rs 123.2 billion. Of the total outlay proposed under the scheme, a large portion of the expenditure will be earmarked for meters and last-mile connectivity. Wherever the transmission lines do not go up to the households, there will be some expenditure on distribution poles, lines as well as transformers.

Under the scheme, a total of 31.8 million households across 21 states that have submitted letters of intent are proposed to be electrified.

In terms of progress, 5.76 million households are reported to have been electrified under the scheme as of May 15, 2018. This represents about 14.94 per cent of the total households that were unelectrified at the time of the scheme’s launch. Goa, Punjab, Gujarat, Tamil Nadu, Andhra Pradesh, Himachal Pradesh, Maharashtra, Kerala and Puducherry have achieved almost 100 per cent household electrification. Meanwhile, Meghalaya (71 per cent), Odisha (67 per cent), Assam (63 per cent), Uttar Pradesh (63 per cent) and Jharkhand (57 per cent) have the lowest household electrification levels.

Launched in 2014, the IPDS aims to provide quality and reliable 24×7 power supply in urban areas. As of April 12, 2018, a total of Rs 284.72 billion has been sanctioned under the scheme. This includes a government grant of Rs 176.54 billion, of which Rs 49.87 billion has been released. Of the total sanctioned outlay, Rs 266.37 billion is for strengthening the sub-transmission and distribution network in 3,618 towns across 500 circles, Rs 9.66 billion for IT enablement of discoms, Rs 6 billion for enterprise resource planning, and Rs 2.69 billion is for smart metering.

On the feeder monitoring front, of the 34,050 feeders, around 31,685 (93 per cent) are being monitored on the national power portal as of April 2018. For registering consumer complaints, 49 public and 11 private discoms have made the short code 1912 operational. For IT enablement under Phase II, a total of 1,932 towns have been sanctioned, entailing an outlay of Rs 9.85 billion.

In terms of physical progress, go-live status has been achieved in 1,376 of the total 1,405 towns. SCADA has been deployed in 52 of the 59 towns and is operational in 27 towns. System strengthening Part B has been completed in 1,187 towns.

Launched along with the IPDS in December 2014, the DDUGJY targets the electrification of all villages and the strengthening of sub-T&D infrastructure in rural areas. As of February 2018, 636 projects worth Rs 413.53 billion have been sanctioned under the scheme, of which Rs 54.53 billion has been released. Meanwhile, as of April 2018, projects aggregating Rs 425.65 billion have been approved. This includes projects for feeder segregation (Rs 151.91 billion), system strengthening (Rs 202.43 billion), metering (Rs 385.87 billion), and electrification of unelectrified villages (Rs 15.12 billion for grid mode and Rs 11.56 billion for off-grid mode projects).

On the village electrification front, a significant milestone was achieved under the scheme on April 28, 2018, with 100 per cent electrification of villages across the country. Leisang village in Manipur was the last remaining village to be electrified. Only 1,305 villages that are either uninhabited or under grazing land remain unelectrified.

Another key grid modernisation initiative is the National Smart Grid Mission (NSGM), which was launched in 2015 and currently has four smart grid projects under implementation. These are in Chandigarh, Amravati (Maharashtra), Congress Nagar (Maharashtra) and Kanpur (Uttar Pradesh), and entail the deployment of advanced metering infrastructure, outage management systems, demand response systems, etc. The total cost of these projects is estimated to be Rs 5.77 billion including support of Rs 1.73 billion from the central government. 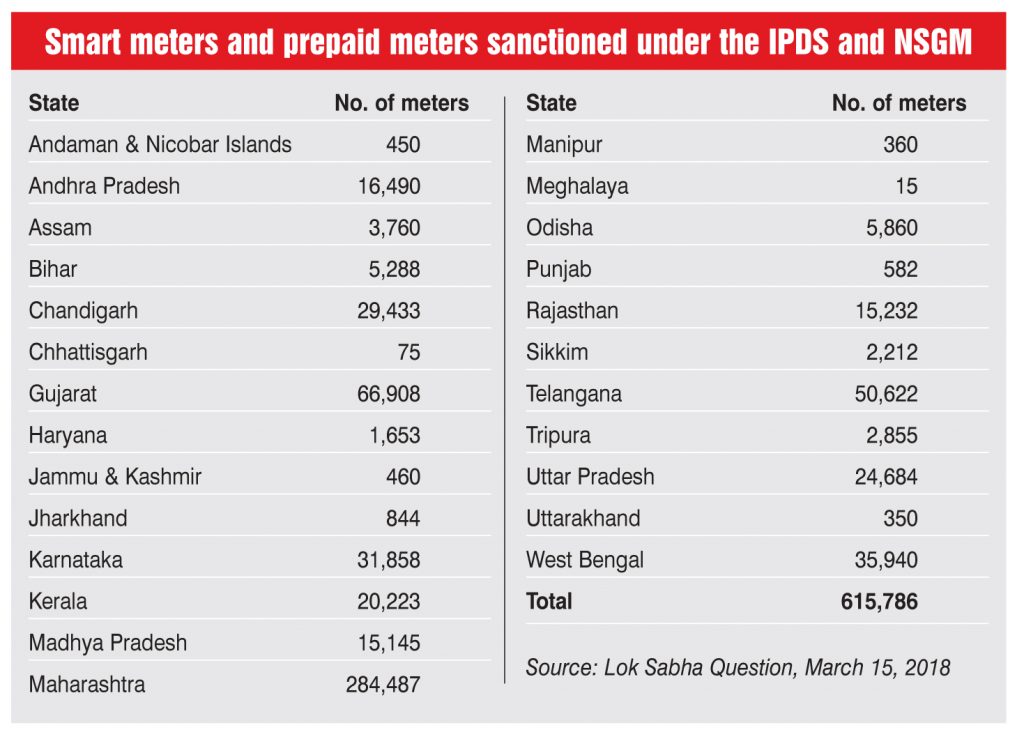 The government schemes for the power distribution segment have significantly aided in strengthening and modernising the electric grid through the augmentation of the T&D network, adoption of advanced technology solutions, deployment of robust and accurate metering, etc. Over the years, these initiatives have enhanced the quality of power supply, thereby improving consumer experience and satisfaction. A strong and modern grid will certainly help in meeting the government’s objective of supplying 24×7 reliable power for all.