Industrial consumers have various options to meet their power procurement needs. To begin with, they have for a long time relied on grid-connected power from discoms and account for a significant 42 per cent of the total energy sale of discoms. However, with quality issues in grid power supply, and rising commercial and industrial tariffs owing to cross-subsidisation by discoms, consumers have been on the lookout for alternative solutions. While self-generation through captive power plants can ensure consistent power supply, fuel supply issues (lack of domestic coal and gas) impact operations or make it expensive to run projects on imported fuel.

In recent years, a key role in meeting the power needs of industrial consumers has been played by the power exchanges. The Indian Energy Exchange (IEX) and Power Exchange India Limited (PXIL), the two power exchanges operational in India since 2008, provide fully automated online platforms for power trading. These exchange platforms provide flexibility to participants for buying and selling varying quantities of power as required in different time blocks, thereby helping them manage their requirements more efficiently.

Signifying the growing participation by industrial consumers, data from the Central Electricity Regulatory Commission’s market monitoring report for 2016-17 shows that more than 4,600 open access consumers were procuring power  through the exchanges as of end March 2017. In fact, almost 60 per of the total volumes transacted on the power exchanges in 2016-17 was accounted for by open access industrial consumers.

In addition to competitive prices, the power exchanges offer a highly liquid and transparent mechanism.  This has led industrial consumers to turn to these exchanges over the years. As there is excess generating capacity in the country, power prices at the exchanges have dropped in recent years. Many large consumers have started taking advantage of this situation by using open access to procure less expensive power from the market when the market price is low enough to be attractive, relative to the utility price,  even  after the addition of the cross-subsidy surcharge (CSS)  and  other charges. In  this  way,  these large  consumers  switch  a  part  or  all  of  their  load  back  and  forth  between  the  market  and  the discom’s regulated tariff. 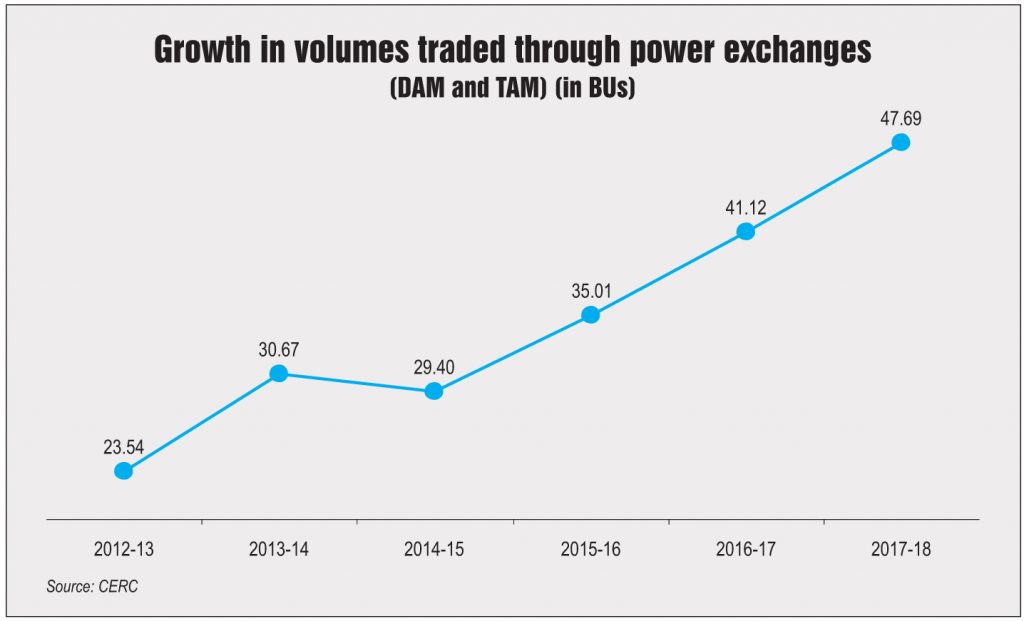 The most traded contracts on the power exchanges are day-ahead contracts. For these contracts, closed double-sided anonymous auctions are carried out in 15-minute time blocks for the following day. The bids entered into cannot be seen by other participants. Both buyers and sellers enter the price and quantum range they are ready to buy/sell electricity at.

The intersection between the aggregated sale and purchase curves defines the market clearing price. Price is discovered for every 15 minutes after aggregating the buy and sell bid requests posted at the exchange using an advanced algorithm based on the economic principle of demand and supply.

Each selected bidder receives the same price (as applicable to its bid area), irrespective of the quoted price for every accepted bid. There are 12 bidding areas. After a review of the corridor availability and funds, the final area clearing volume and area clearing prices are calculated specific to an area. Bids can be placed as single bids or block bids. Clearing prices are uniform in the case of an unconstrained market.

However, a market-splitting mechanism is adopted in the case of congestion in the transmission corridor (by increasing prices in deficit areas and reducing them in surplus areas so as to facilitate power flow from the surplus to the deficit areas.) The minimum allowed bid volume for day-ahead contracts is Re 1 for 0.1 MWh. The mechanism allows risks to be managed as buyers pay in advance and sellers are paid post-delivery.

Two term-ahead market  products are currently available on the power exchanges–weekly and daily contracts. A weekly contract is traded twice a week (usually on Wednesdays and Thursdays) for the subsequent week and the week following that respectively (with each week treated as a single block). Meanwhile, daily contracts are available for trade for all days in the following week. 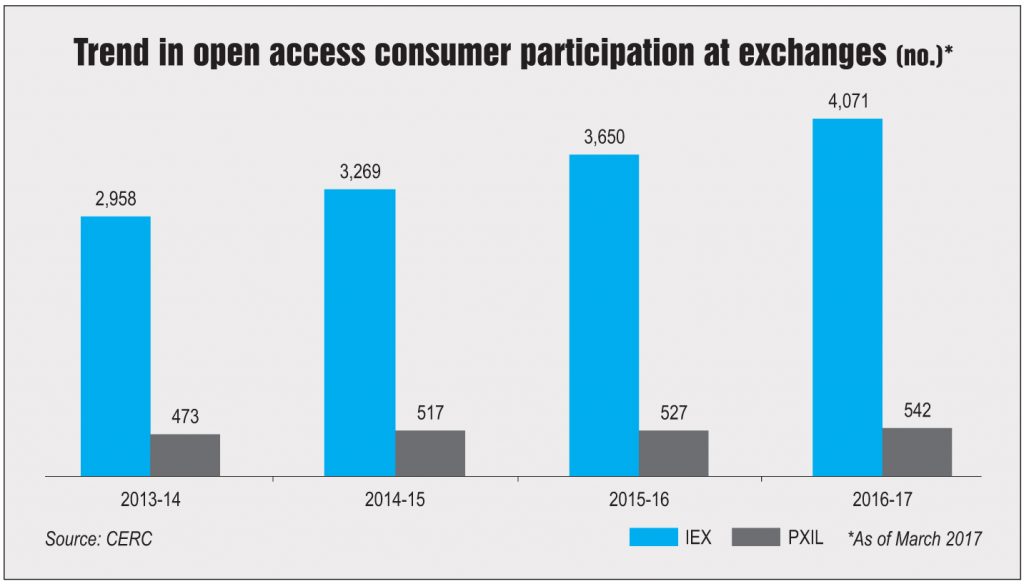 The prices, however, have been building up over the past few months owing to peak summer season demand and lower generation. They touched Rs 3.98 per unit in April 2018 and Rs 4.67 per unit in May 2018 at the IEX. 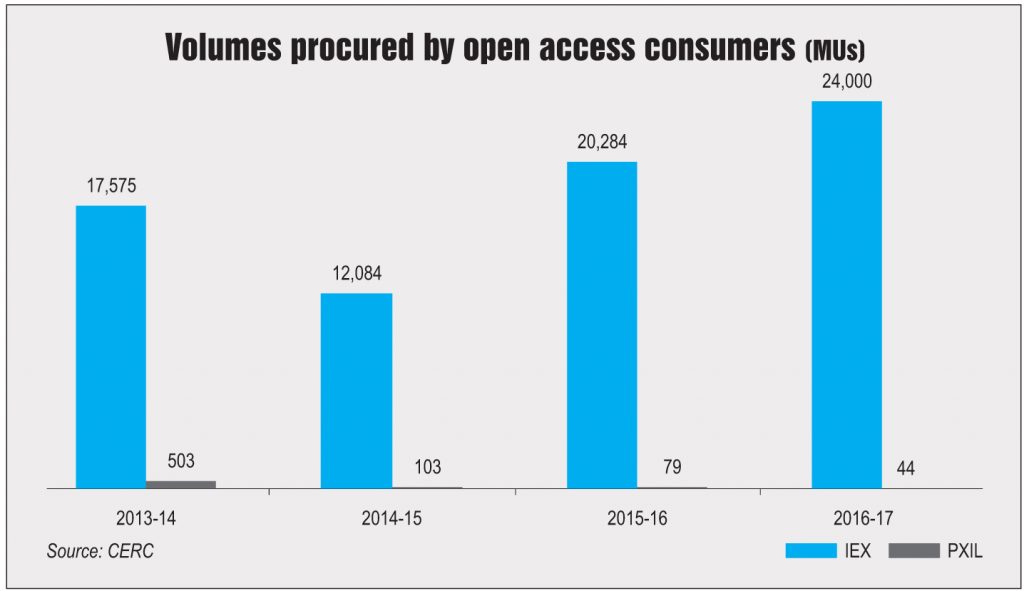 Other products for industries

One of the new products launched by the IEX for helping industrial consumers meet their energy efficiency goals under the Perform, Achieve and Trade initiative of the National Mission for Enhanced Energy Efficiency is energy saving certificates (ESCerts). ESCerts are issued by the Bureau of Energy Efficiency to designated consumers (DCs) who reduce power consumption more than their specific energy consumption targets. These certificates can be traded and used by other DCs who are unable to meet their targets or find it expensive to meet their targets for compliance purposes. Industries which fail to meet their targets will either have to buy ESCerts, or will be penalised. Trading of ESCerts commenced in September 2017, and around 1.3 million ESCerts were traded in 2017-18.

Besides ESCerts, trading of renewable energy certificates is also carried out at the power exchanges. The market-based instrument was launched in 2011, with the aim to promote investments in renewable energy and to facilitate cost-effective compliance of renewable purchase obligation targets of states. In terms of trading, the market is yet to realise its full potential, as most of the obligated (RPO) entities are not complying with their RPO requirement. In 2016-17, a total of 6.49 million RECs were traded on both the power exchanges against the total inventory of 24.79 million RECs. 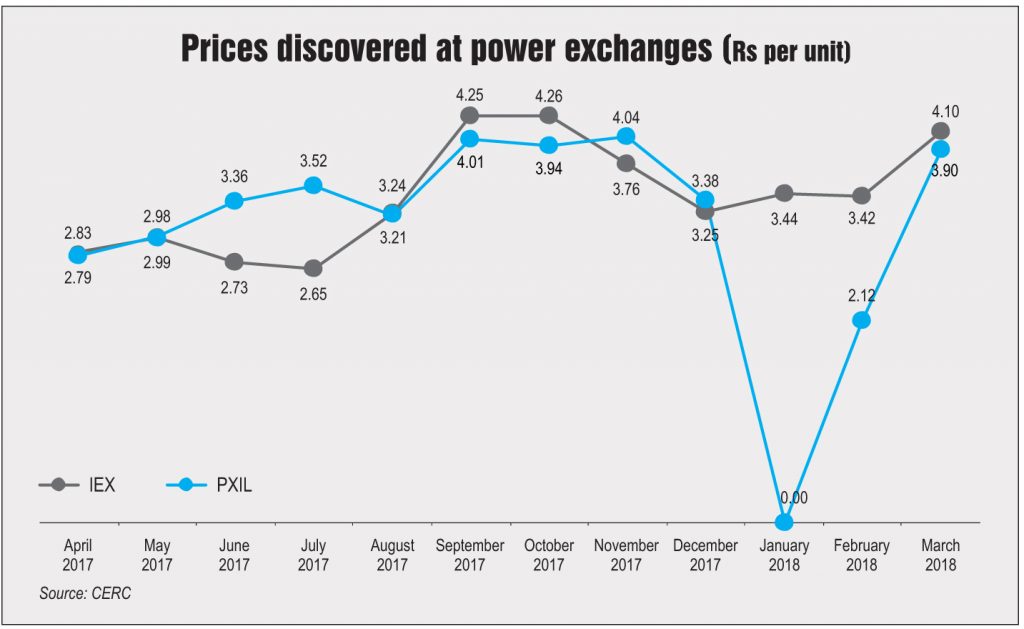 One of the biggest challenges for industrial consumers is the lack of open access. The reason for this is the continued resistance by state distribution utilities, driven by the fear of losing high-value industrial consumers. The distribution companies  have  been  adopting  restrictive practices  such  as  increasing  the  cross-subsidy  surcharge,  wheeling  charges, as  well  as  the  additional  surcharge  to make  open  access unviable. Several distribution companies have not built infrastructure such as metering and  energy  accounting  systems. While  the CSS varies across states, it has generally  been quite high, acting as a  deterrent for consumers considering opting for  open access. In spite of the advice in the successive versions of the Tariff Policy to reduce the CSS over time, there has been a reluctance on the part of states  to  reduce  CSS  without  reducing  the  actual  cross-subsidy  in  the  tariffs.

Also, although efforts are being made to expand transmission capacity, transmission congestion in the past has led to the splitting  of  the market  on  the  exchanges, with the power-deficit regions seeing higher  prices  and  the power-surplus  regions  seeing  low  prices.  Both  generators  and consumers have been adversely affected  due  to  congestion  and  the exchanges  have also lost significant volumes  of  electricity  trade.

These concerns notwithstanding, short-term power trading through exchanges has become an important tool for industrial and commercial consumers to hedge the risks associated and the erratic cost of energy charged by state distribution companies, and to optimise power costs.