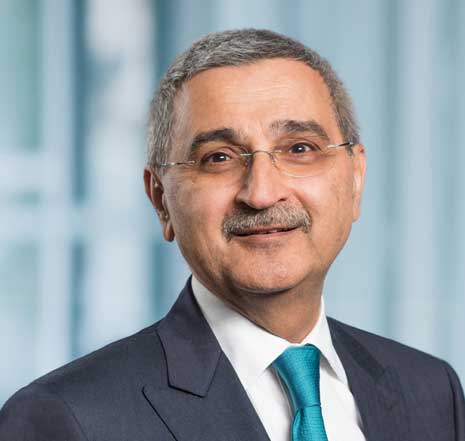 Shaping the world of tomorrow through pioneering technology is the objective of the $1.5 billion ABB invests annually in research & development. In this interview, Chief Technology Officer Bazmi Husain, an expert in power and automation who has been with ABB for more than 30 years, tells us about those efforts and the future of innovation.

You’ve said that research is the lifeblood of ABB. Tell us about that.

ABB at its very core is a technology company. We are the pioneering technology leader, and we define our history by the innovations we’ve introduced.

Maintaining a focus on research is more important than ever, because the rate at which new technologies are coming out is unprecedented. There are also disruptive business models, such as Uber and Airbnb, and a startup culture has taken hold.

At ABB, there are great advantages to having a rich history, but we also continually renew our thinking, so that we can maintain our leadership. In this regard, one of the biggest changes is that the ecosystem in which we do our research & development has shifted to a more open model, where we work with startups and we also partner with established blue chip companies. Through our ABB Technologies Ventures (ATV) group, we have approximately $200 million invested in startups.

Our ABB Ability™ digital solutions offering is a great example of this open approach. It’s built on Microsoft’s industry leading Azure cloud platform. One way to think of ABB Ability™ is that it is the vehicle through which we deliver ABB’s expertise to our customers. This enables better asset utilization and greater uptime.

ABB has also led the way in the Industrial Internet of Things (IoT), with our rich portfolio of applications.

Can you provide some perspective on Industrial IoT and on ABB’s role in the Fourth Industrial Revolution?

The Fourth Industrial Revolution is about one thing: a step-change increase in industrial productivity. One way to accomplish this is to field numerous intelligent devices. Rather than concentrating intelligence in one place, it’s distributed — that’s the core of the thinking behind the Industrial IoT — to unlock the value that’s available through these devices.

Connectivity is a key enabler. If intelligent devices can talk to each other, they will be able to coordinate and cooperate. These devices will also send diagnostic information back to a central monitoring station (or allow the data to be queried remotely), so that predictive maintenance can be performed in advance of any failures.

The Fourth Industrial Revolution is occurring in tandem with an Energy Revolution, right?

Correct. We’re seeing the rise of renewables, for reasons that have a lot to do with the need to reduce carbon emissions. One of the big advantages of renewables like wind and solar is that you can be economical on a much smaller scale than with conventional energy sources.

We are the global leader in power grids, and ABB’s overall objective is to enable a stronger, smarter and greener grid. Renewables are an important part of that effort. Microgrids are also significant—they’re a key way to deliver power in remote areas or places where the power grid is weak. Microgrids consist of distributed energy resources, such as I’ve just discussed, and loads that operate in a coordinated way and are typically located at or near the place where energy is used. Microgrids can generate power from both renewable and conventional sources.

Microgrids are now increasingly coupled with battery storage systems. This ensures that users are never without power. For example, excess solar power generated during the day can be stored in the battery, and then that power can be used during the night.

Another important development in the Energy Revolution is the requirement to get more power to the world’s growing urban areas. In 1954, we pioneered high-voltage direct-current (HVDC), which enables the transmission of thousands of megawatts of power across long distances with minimal losses—far, far less than would be the case with alternating current. We built the first system in Sweden.

Today, as populations grow worldwide, there’s more of a need for HVDC than ever, to take electricity from where it’s generated—for example, at hydroelectric plants or at remote wind farms—and deliver it to cities where it’s needed. In China, ABB is currently building the most powerful such system in the world, which we call ultrahigh-voltage direct current, or UHVDC. It will be capable of transporting 12,000 megawatts of electricity–the equivalent of 12 large power plants—over a distance of more than 3,000 kilometers, from the Xinjiang region in the northwest of China, to Anhui province in eastern China.

ABB has also constructed a UHVDC link in India. It transfers up to 1,500 megawatts of power across a distance of 1,700 kilometers, bring electricity to 90 million people in the north of India.

What advances are we going to see in the future of automation?

ABB has played a key role in automating industry, and we think in the future automation will move more towards autonomous operation. What this really means is that intelligent systems will be able to handle unplanned situations – i.e. situations they were not specifically ‘programmed’ for.

The key to enable this shift will be machine learning and artificial intelligence (AI) capabilities, which we are starting to see today. And this will be a journey—we will see increasing levels of autonomy rather than having a single definition of what it means to be an autonomous system.

I can make an analogy to robotics. During my time at ABB, I’ve seen robots evolve from large industrial welding robots that has to be kept in steel safety cages to the collaborative robots, like YuMi®, that we have today. YuMi can actually work alongside people, and can perform delicate tasks like pick-and-place.

In automation today, we also have the emergence of mass customization, which previously couldn’t be done because it wasn’t economical to make numerous variations of a product on the same production line. Manufacturers today can use systems like B&R’s ACOPOStrak, which is an intelligent transport system to move parts to the production line during the manufacturing process. [B&R was acquired by ABB in 2017 and has been integrated into ABB’s Industrial Automation division as its global Machine & Factory Automation business unit.] And ACOPOStrak can extend the economy of mass customization down to a batch of one.

What made you decide to spend your career at ABB?

One great thing for me has been that ABB allows you to switch between different roles, which is something that very few companies do. So, you’re learning all the time and you don’t get bored.

I’ve had many different roles at ABB since I joined in the early 1980s. I managed a variety of local business units and divisions in India and Singapore before taking responsibility for ABB’s Corporate Research Center (CRC) in India in 2002. Subsequently, I was director of ABB’s CRC in Vasteras, Sweden, and also led ABB’s global automation technology research.

So you’re in a perfect position to give us your thoughts on what a company like ABB might be doing 30 years from now.

Well, I think space is the next frontier. In 2048, a company that’s an industrial artificial-intelligence (AI) powerhouse might have a presence on Mars. Perhaps this sounds like science fiction, but consider that, at the end of last year, we had the first trials of ABB’s subsea technology, which will put oil & gas platforms on the floor of the ocean at a depth of 3,000 feet. That’s obviously a very extreme environment, and the knowledge we acquire will be of value if at some point in the future there’s the desire to go out into space.