State transmission utility, Rajasthan Rajya Vidyut Prasaran Nigam (RVPN), is witnessing significant growth. In line with the state’s plans to harness its huge renewable energy potential of over 10 GW, significant efforts are being made by RVPN to upgrade and add new infrastructure for the smooth evacuation of renewable energy. With a number of projects at an advanced stage of completion now, the state transco is aiming to mitigate all grid constraints in renewable energy evacuation by the end of 2018-19.

Set up in 2000 after the unbundling reform process, RVPN has over the years implemented a number of initiatives to improve its operational and financial performance. It is the first in the country to implement the smart transmission network and asset management system STNAMS for enhancing the situational awareness of the grid. The transco has also been undertaking other initiatives such as enterprise resource planning (ERP) to ensure that it moves to an online platform and achieves end-to-end integration. With these initiatives, its current transmission losses are at less than 4 per cent and the transmission network availability at an impressive 99.89 per cent. 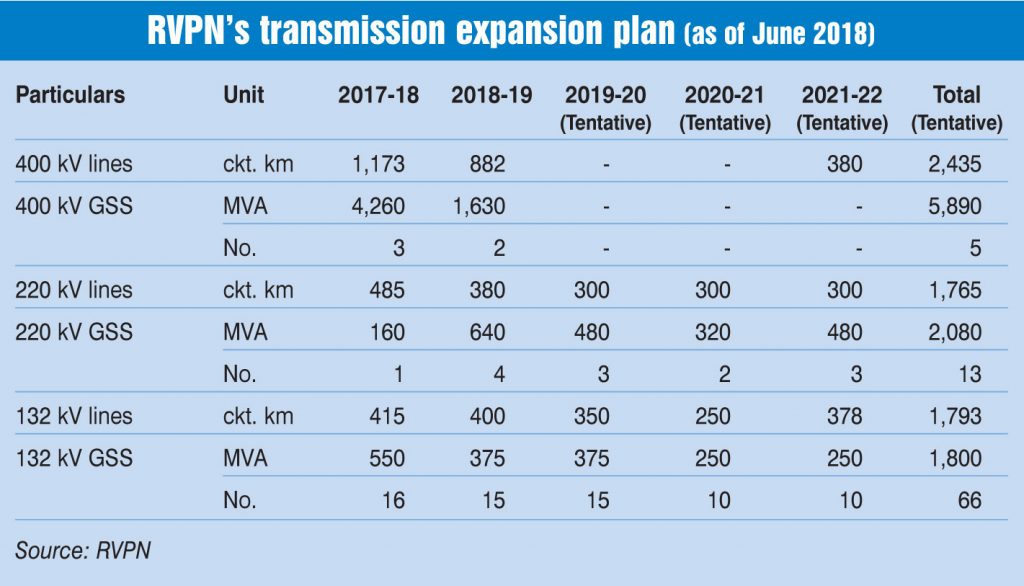 RVPN has drafted a comprehensive roadmap for the implementation of several smart initiatives. One of the key steps being taken by the utility is the implementation of the SAP ERP solution to achieve end-to-end integration of various business processes. Rajasthan is among the very few transcos that have implemented ERP. Through ERP, the utility is able to prepare business intelligence reports on plant maintenance, project systems, financial accounting, human capital management and material management.

ERP has enabled the utility to switch to online paperless working for a number of aspects. For instance, ERP has enabled online data logging, analysis and monitoring of all grid substations. Physical progress of works is also updated online. Based on the data recorded in ERP, the utility has been able to analyse and reduce transmission losses. The monitoring of contract closures through the ERP system ensures the timely completion of all works/liabilities.

On the renewable energy front, the utility has constructed 35 substations for power evacuation. While the grid has been facing constraints related to the evacuation of power, the utility is confident that post 2018-19, such constraints will be eliminated completely with various transmission system projects at advanced stages of implementation. The utility expects the completion of two substations of 400 kV by September 2018 and six transmission lines of 400 kV by end 2018-19.

Another major initiative being taken by RVPN is the implementation of the Smart Transmission Operation Management System, which has been approved by the Ministry of Power under the PSDF. With this initiative, the utility has made open-access approvals online, right from the filing stage. Online scheduling is being done for state power generators, independent power producers and renewable generators. The initiative has also enabled the utility to implement online procedures for deviation settlement mechanism, billing, automatic meter reading, energy accounting and loss, shutdowns, etc.

STNAMS has been designed by the utility in-house and is expected to enhance the visualisation control layer for all grid substations; supervisory control and data acquisition (SCADA)/energy management system (EMS); fibre optic communication elements; data acquisition; decision support system at the command and control centres; and information and communication (ICT) infrastructure. The utility has also started laying optical ground wire for all substations up to the 132 kV level. Of the total 13,770 km planned, 1,200 km has already been laid, as of June 2018.

The utility has also taken a number of initiatives to reduce cost. It has undertaken organisational restructuring and eliminated idle employee posts, which saves about Rs 800 million annually. RVPN has also outsourced the operations and maintenance of around 162 substations of 132 kV rating. These have been outsourced in clusters of three grid substations each.

With the help of ERP-based monitoring and proper management of assets, the utility has been able to earn Rs 400 million by auctioning scrap in 2017-18. RVPN has also awarded 15 grid substation projects at the 132 kV level through public-private partnership, of which six have been commissioned. (All the 15 projects have been awarded to Adani Transmission).

RVPN’s transmission system is being extensively used as an ISTS system for evacuating renewable power. Hence, the transco has been working towards gaining approvals from central agencies for the transco’s EHV lines used for carrying power outside the state. This is helping the transco save point of connection charges and earn revenue.

The utility has been undertaking the Japanese methodology, 5S (Sort, shine, set in order, standardise and sustain) which has help made 97 per cent of its grid substations scrap free and resulted in cleaner working environment, better utilisation of assets, revenue generation and overall improved working conditions. The utility has also initiated performance-based marking scheme for all its GSS, which has been devised in house for carrying out monthly evaluation of every grid substations on various parameters.

Another practice being followed by the utility is to use WhatsApp groups for faster communication. Also, the utility has been following the practice of declaring one of its substations as “Mahila grid substation” each year on International Women’s Day wherein a female engineer staff is deputed to manage substations.

A challenge being faced by the transmission utility is with regard to the mismatch between the gestation period of renewable energy projects and transmission systems. While wind and solar plants get completed in 6-18 months, the development of 220 kV and 400 kV transmission systems takes around four years. Thus, an integrated planning approach needs to be adopted at the intra- as well as interstate levels.

Another challenge is voltage problems as the renewable energy projects are located far away from the load centres. This requires considerable investments in installing suitable compensation elements such as reactors, STATCOMs, capacitors, etc. The utility also faces operational and grid stability issues as there are huge variations in renewable energy generation. The renewable energy management centres integrated with the existing load despatch centres are being established in the state to cater to this problem.

These challenges notwithstanding, RVPN has significant expansion plans, with the transco planning to set up 84 grid substations, 5,993 ckt. km of lines and 9,770 MVA of transformer capacity in the Thirteenth Plan period (2017-18 to 2021-22). Overall, RVPN’s concerted efforts to augment its transmission system technologically and improve efficiency are likely to help prepare the grid for a renewable-rich future.

Based on a presentation by G.D. Pamnani, Executive Engineer (Corporate Monitoring), RVPN