The thermal power generation segment has been under a lot of stress lately. The changing energy mix due to a growing focus on renewables, the non-availability of long-term power purchase agreements), languishing plant load factors, promoters’ inability to infuse funds and service debts, and fuel supply concerns are some of the challenges facing the segment. This has directly impacted the boiler, turbine and generator (BTG) industry that derives its business from the thermal power generation segment.

The industry is staring at an all-time low in ordering acitivity, capacity underutilisation, aggressive bidding and undue pressure on margins as players compete for the limited opportunities. The industry received orders for merely 6.36 GW of capacity in 2017-18 and 4.62 GW in 2016-17 against a cumulative domestic BTG manufacturing capacity of over 30 GW.

In this adverse scenario, BTG equipment manufacturers are mitigating their risks by focusing on the international markets and diversifying their product portfolios. The market for emission control solutions and retrofits, however, has witnessed increased demand, which is expected to help the industry tide over the ordering slump.

BHEL is the country’s largest equipment supplier and holds a majority share in the market with an annual equipment manufacturing capacity (thermal, hydro and nuclear) of about 20,000 MW. BHEL has entered into technology collaboration agreements with GE for supercritical boilers and Siemens for supercritical turbine generators. 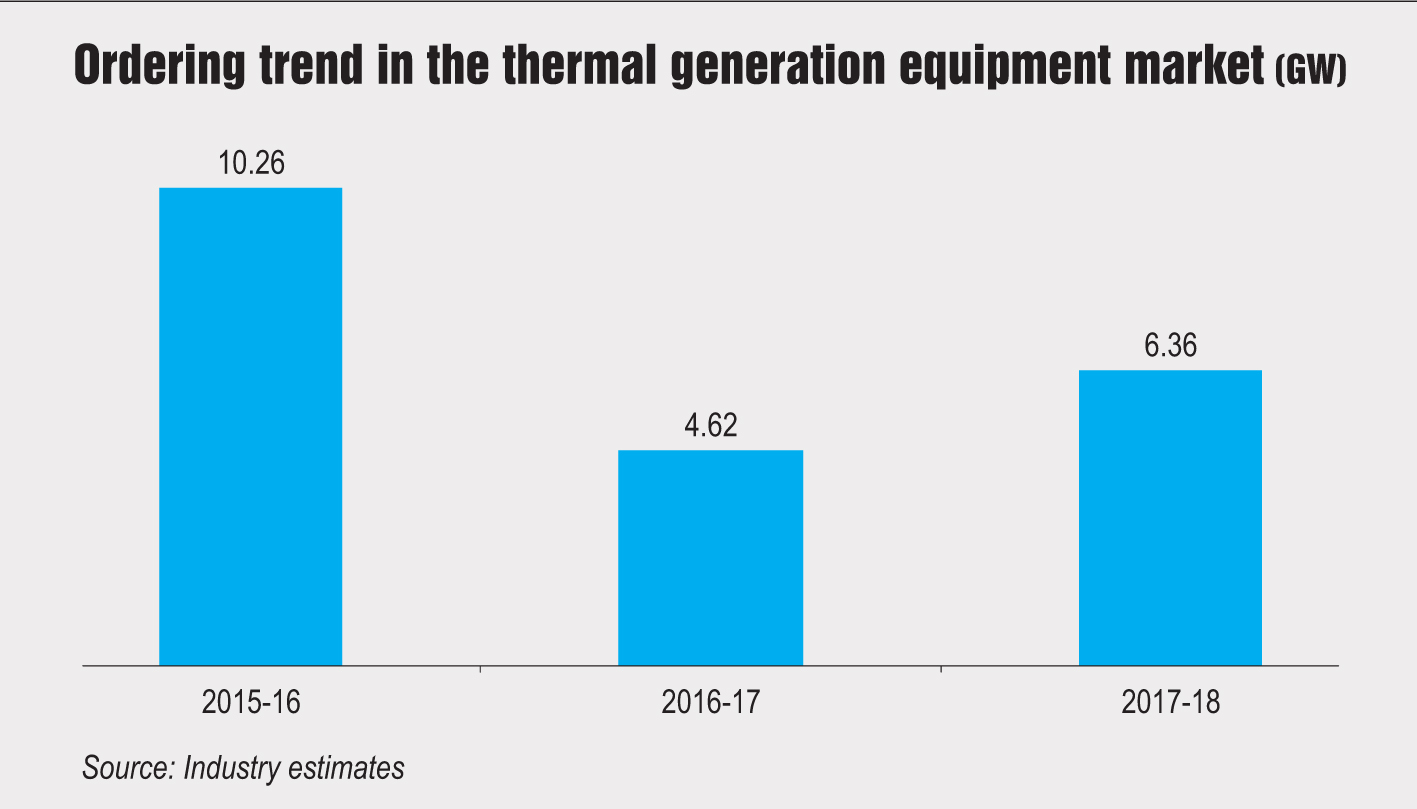 The ordering activity improved in 2017-18, mainly on account of orders from central and state utilities as the private sector did not announce any new project. BHEL maintained its leadership position in the thermal power segment with a 100 per cent market share as per a recent press release by the company. The company secured orders worth Rs 409.32 billion in 2017-18, an increase of 74 per cent over the previous year. The power sector accounted for over 80 per cent, or Rs 333.4 billion of the total orders secured, while the rest came from the industrial sector and overseas businesses. The orders from the power sector recorded an impressive increase of over 3.5 per cent in 2017-18, from Rs 72.6 billion in 2016-17. This can be attributed to the highest value order ever placed in the sector worth Rs 204 billion for the 4,000 MW Yadadri supercritical thermal power plant (STPP). The order was placed by Telangana Power Generation Corporation Limited (TSGenco) to execute five 800 MW units on an engineering, procurement and construction (EPC) basis.

Industry experts agree that it will be tough for the thermal power sector to get back to the high levels of ordering witnessed in 2008-10, with the increasing thrust on renewable energy. In this scenario, power generation equipment manufacturers are looking at new opportunities in areas such as emission control equipment, thermal power plant replacement and international markets.

The notification of the revised emission norms by the Ministry of Environment, Forest and Climate Change in December 2015 has opened up avenues for the installation of emission control equipment such as flue gas desulphurisation (FGD) systems, selective catalytic reduction (SCR) and selective non-catalytic reduction systems, electrostatic precipitators (ESPs), baghouse filters, and auxiliaries in TPPs. Around 650 units aggregating about 197 GW are required to meet the new emission limits. As per a study by C-STEP and Shakti Sustainable Energy Foundation released in July 2018, the total investment required for the installation of emission control technologies in existing and upcoming TPPs is estimated at about Rs 3.9 trillion up to 2030. The investment includes capital cost (accounting for 64-70 per cent of the total expenses) as well as additional expenses such as operations and maintenance (O&M) expenses, reagent costs and other costs. In terms of technologies, the SOx control equipment will require the highest investment, accounting for 63 per cent of the total, followed by NOx control equipment (32 per cent) and particulate matter (PM) control equipment (5 per cent).

The CEA has also laid down a roadmap for plants to install emission control technologies from 2018 to 2022. For FGD installation by 2022 for SOx emission control, the CEA has identified around 161.52 GW of capacity (414 units), with around nine units to be retrofitted in 2018-19 and the remaining 405 units from 2020 onwards. Similarly, for meeting the PM norms, around 231 units aggregating 65.92 GW of capacity have been identified by the CEA and will require retrofitting with ESPs, with only one unit to be retrofitted by 2018 and the remaining by 2022.

Given the immense potential of the emission control equipment market, many equipment suppliers are entering into technology collaborations with international players. For instance, L&T has signed a technical licence agreement with Chiyoda Corporation, Japan, for offering FGD systems. L&T-MHPS Boilers Private Limited has partnered with Mitsubishi Hitachi Power Systems for the supply of SCR systems. Meanwhile, BHEL has recently entered into a technology collaboration agreement with Korea-based Nano Company Limited for the design and manufacture of SCR systems for NOx control.

Tendering activity for FGD orders has seen an uptick in the past few months. In June 2018, BHEL secured an order from TSGenco for the installation of FGD systems worth Rs 10 billion. The company has received FGD orders for 22 thermal power units till date. In March 2018, equipment major GE received an order of Rs 3.09 billion from NTPC Limited for installing FGD at Phase I of NTPC’s 1, 600 MW STPP in Telangana. In July 2018, ISGEC Heavy Engineering emerged as the L1 bidder in the reverse auction for the supply of FGD systems to three units (800 MW each) of NTPC’s Kudgi super thermal power project. L&T Power also received two orders worth Rs 10.8 billion in August 2018 for the installation of FGD systems at NTPC’s two projects – Khargone and Lara. As per research estimates, the industry is likely to receive Rs 170 billion worth of orders in 2018-19.

In a bid to control emissions from old TPPs, the central government is encour  aging the replacement of old and inefficient subcritical plants with supercritical plants of higher efficiency. This will bring forth new business opportunities for power generation equipment suppliers.

In the National Electricity Plan, the CEA has considered retirement of 22,716 MW of coal-based capacity. Of this, 5,927 MW of plants will retire owing to the completion of their operational lifespan and 16,789 MW will retire due to the lack of sufficient space for the installation of FGDs, besides the completion of 25 years by 2022. The retired plants are proposed to be replaced with modern supercritical plants and around 10,180 MW of new capacity is expected to come up as replacement of projects identified by the CEA across the state and central sectors.

Significant opportunities are also expected to come up in the renovation and modernisation (R&M) space as the CEA has identified 4,800 MW of plants for R&M between 2017 and 2022. 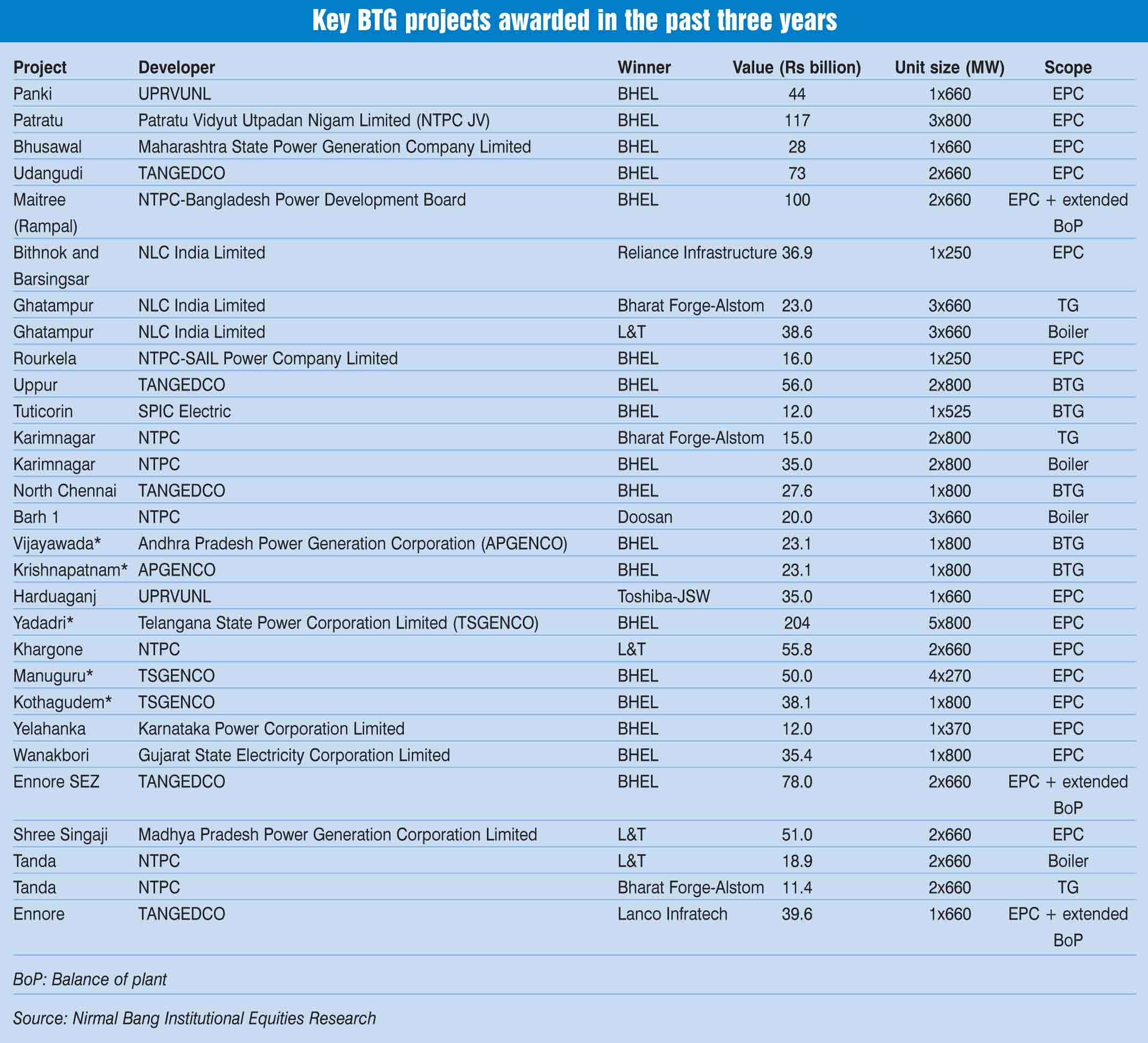 Thermal power generation equipment suppliers are surely going through tough times and looking for business opportunities in varied segments to mitigate the risks of low demand. In the short run, cost cutting and operational efficiency improvements will help companies secure the limited number of orders that are on offer. In the long run, however, generation equipment suppliers need to pursue a diversification strategy in terms of product offerings, to align with the changing requirements of the power sector. As per the MoP’s report on the optimal energy mix for power generation, the share of coal- and gas-based power in the installed capacity is set to decline to 50.7 per cent by 2021-22 and further to 42.7 per cent by 2026-27 from the current share of 64 per cent. Although coal-based power will remain the mainstay of power generation for a long time to come, business opportunities in the core BTG segment are expected to decline. However, the market for emission control equipment, retrofits, O&M, and spares will continue to exist and new business opportunities will emerge in the nuclear power, battery storage and clean coal technology space.