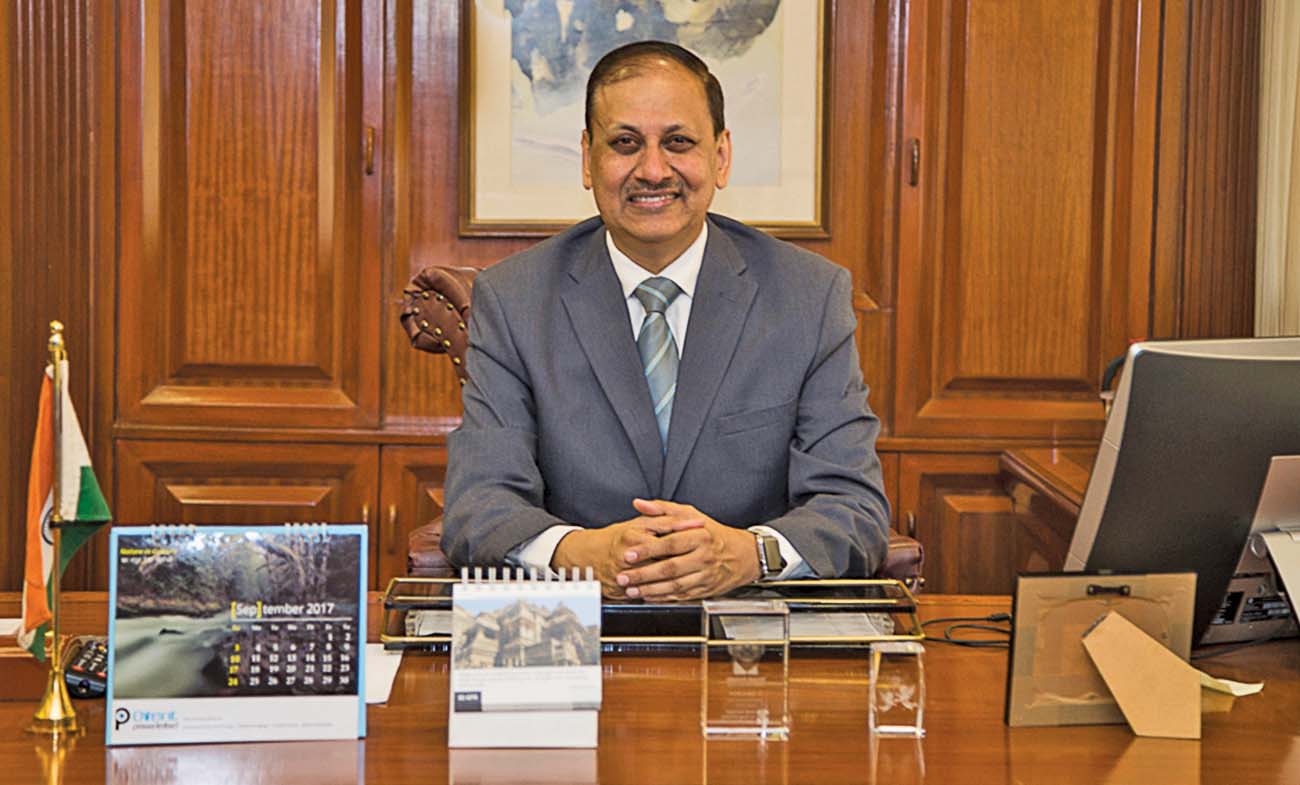 The recent power demand-supply mismatches have given an impetus to power trading in the country. The industry has witnessed an increase in the traded volumes, rise in spot prices of power and convergence of power prices discovered on the exchanges with bilateral market prices. In order to meet the growing demand for power trading in the country, PTC India Limited is working to introduce new products and services, as well as developing retail, advisory, portfolio management and energy efficiency services to cater to the changing needs of the consumers. In a recent interview with Power Line magazine, Deepak Amitabh, chairman and managing director, PTC India, discusses his views on the current state of the power sector as well as PTC India’s key achievements and future plans…

What is your assessment of the current state of the power sector? What have been the sector’s biggest achievements in the past one year?

The biggest achievements, in my view, were on the policy and regulatory front. The government and regulatory bodies continued the reform process for debottlenecking and improving power supply. A transparent coal allocation policy for the sector, SHAKTI, was issued in May 2017 to ensure adequate coal supply to power plants. The government also launched the Pradhan Mantri Sahaj Bijli Har Ghar Yojana to achieve universal household electrification in the country. For strengthening of the transmission system in the rural and urban areas, Rs 300 billion was disbursed under the Integrated Power Development Scheme and Rs 414 billion under the Deendayal Upadhyaya Gram Jyoti Yojana till June 2018. Under the Ujwal Discom Assurance Yojana, bonds were issued by various states for a total amount of Rs 2,321.63 billion. The Ministry of New and Renewable Energy (MNRE) launched competitive bidding for the procurement of power from wind projects, and bidding for more than 6,000 MW has taken place so far in four phases.

During 2017-18, the sector witnessed a growth of 5.2 per cent in terms of installed capacity, an addition of 17,154 MW. The growth trend in renewables continued with the capacity reaching 69,022 MW (20 per cent growth). During 2017-18, the renewable capacity addition surpassed capacity addition in the conventional sector. The energy generation grew at 6.1 per cent to reach 1,203 billion units (BUs) as compared to the previous year’s generation of 1,134 BUs. The transmission capacity addition stood at 23,119 ckt. km as against the target of 23,086 ckt. km. However, despite capacity additions in generation and transmission, there was a slight increase in the peak deficit situation from 1.6 per cent to 2 per cent during 2017-18. The energy deficit remained constant at 0.7 per cent during 2016-17 and 2017-18. The market witnessed a higher liquidity and a greater depth, with more participants than the previous years.

From PTC’s business perspective, we see power supply coverage for the entire population through grid connectivity and increase in power demand as the key drivers for enhanced opportunities in power trading. The increasing efficiency of appliances and usage of machinery is expected to boost energy demand at household, and commercial and industrial units.

What have been the trends in traded volumes and prices in the past 12 months?

If we compare the traded volumes of the past one year (July 2017 to June 2018), we find that there has been an 18 per cent increase in the total traded volumes in the short term excluding the deviation settlement mechanism (DSM), reaching 10.9 BUs in June 2018. The prices in the power market ranged from Rs 3.50 and Rs 4.50 per unit, both on the bilateral and power exchange platforms. The market clearing price stood at Rs 4.02 per unit in FY 2018-19 until September 2018 and Rs 3.26 per unit during FY 2017-18. If we look at the scenario two years back, the bilateral prices were around Rs 3.53 per unit and exchange prices were around Rs 2.50 per unit in 2016-17. Earlier, the exchange prices and bilateral prices showed a differential of Re 1 per unit. However, owing to the current demand-supply dynamics, the bilateral and exchange prices are now in the same range.

From the perspective of volatility, if we look at the average tariffs in the short-term market in last one year, we find that bilateral prices have remained more stable, whereas the power exchange prices have shown higher volatility with the recent prices crossing over Rs 7.5 per unit on a daily average basis.

What are your views on the discussion paper on real-time electricity markets in India and its likely impact on the power trading segment?

At present, real-time energy imbalance is managed by means of DSM, ancillary services, intra-day bilateral contingency transactions, intra-day market of the power exchanges, and rescheduling/revision of schedule four time blocks ahead (right to recall). Efforts are being made to reduce DSM. At the same time, ancillary services are also challenging to implement but they are picking up volumes gradually. The intra-day market was introduced in the power exchanges for meeting the energy requirements closer to real time. The introduction of ancillary services is a more fundamental move towards establishing a long-term market design.

The proposed real-time market will be a 24×7 hourly market, wherein buyers and suppliers can buy/sell power to bridge the gap created by the deviations from their respective schedules. One important aspect of the real-time market is that it will be an energy-only market and will be around the variable/marginal cost. The fixed cost liability will be settled as per the existing contracts and Tariff Policy provisions.

In our view, the real-time market will help create the much-needed liquidity in the power market. It will also give flexibility to buyers and sellers, especially the renewable power generator to manage the fluctuations in renewable generation more efficiently. It is a fundamental move towards a sound market design.

What according to you are the key steps required to ease open access constraints?

The power sector has regulatory bodies both at the centre [Central Electricity Regulatory Commission and state state electricity regulatory commission (SERC)] levels. Certain regulations such as open access, which are effective at the central or interstate level, also need to be framed and implemented at the state level through SERCs. Experience so far shows wide variations in approaches adopted by the states. A uniform approach towards open access regulations will help expedite the process.

Open access viability is also reducing day by day due to higher cross-subsidy surcharge and additional surcharge. The same needs to be captured through cost-reflective tariffs for all segments of consumers. The resistance from discoms to permit open access stems from an apprehension that it may wean off the subsidising consumers from their portfolio. However, in the long run, permitting open access will be beneficial for discoms as well as for the overall ecosystem and GDP. Reliable power supply will attract industrial units to set up/expand their establishments in states leading to higher overall electricity consumption. Higher electricity flow would mean higher grid utilisation and higher revenue for discoms.

Finally, the tariff applicable to any category of consumers should be cost-reflective and subsidies should be in the nature of direct benefit transfer. A shift in the perception of electricity from a social good to a commercial product will enable its appropriate use among various consumers. Regulators have an important role to play in this scenario to ensure that the economic principles are followed while determining tariffs and cross subsidies.

What has been the discoms’ response to the pilot scheme for power procurement? What is the outlook for demand growth in the next one to two years?

Discoms’ response has been quite encouraging as various discoms across the country have shown interest in purchasing power under the scheme, given its various benefits. As per our estimates, demand is going to pick up in the next few years with the government’s focus on supplying 24×7 power to consumers and aggressive electrification across the country.

What were PTC India’s key accomplishments over the past year?

PTC maintained its leadership position with a market share of 44.1 per cent. During 2017-18, PTC clocked an all-time high trading volume of 57.02 BUs, recording an increase of 18 per cent. Cross-border transactions with Nepal, Bhutan and Bangladesh contributed 12.2 per cent (6.96 BUs) of the total traded volumes.

PTC Retail, a strategic business unit set up to facilitate power supply to industrial and commercial consumers, has seen considerable growth this year. Traded volumes on the power exchanges stood at 20.3 BUs during 2017-18 as compared to 18 BUs during 2016-17, witnessing an increase of 13 per cent.

In addition, PTC is continuously expanding its footprint in the electricity industry through power portfolio management, and consultancy services like technical advisory, energy audits, network maintenance and regulatory compliance advisory. PTC also launched the first pilot forecasting model and portfolio management for a state in the eastern region for supporting it in load forecast, merit order despatch, power procurement/sale, scheduling, etc. After the successful completion of the pilot stage, commercial products are under development.

In the renewable energy space, PTC was selected as the trading partner and signed power purchase agreements with five generating companies for the procurement of 1,050 MW of wind power under the MNRE and Solar Energy Corporation of India (SECI) schemes and also signed power supply agreements with seven state discoms and utilities for the entire quantum. PTC is also supporting SECI in managing the operational and commercial aspects of solar energy and scheduled 1.2 BUs during 2017-18. Similarly, in the retail business segment, PTC executed its first renewable energy trading transactions (solar and biomass) for industrial/commercial customers in Rajasthan and Odisha, respectively. PTC, in association with Kongsberg, Norway, successfully implemented first-of-its-kind performance monitoring and generation forecasting of hydropower projects in Himachal Pradesh on a pilot basis.

PTC’s subsidiary, PTC Energy Limited (PEL) has a renewable energy portfolio of 288.8 MW, consisting of wind power projects in Madhya Pradesh, Karnataka and Andhra Pradesh. It entered into firm long-term power sale agreements for all of its projects with the respective state discoms and has been receiving regular payments from them.

On the corporate social responsibility (CSR) front, PTC is committed to ensuring its contribution to the welfare of communities in society, of which we are a part. PTC, along with its group companies PTC India Financial Services Limited and PEL, has formed a trust “PTC Foundation” for jointly undertaking various CSR initiatives in the areas of environment, sanitation and skill development.

How would you sum up the company’s growth strategy for the next few years?

In the next few years, we would concentrate on growing our core business of power trading. Our focus will be on introducing new products and services to cater to the changing needs of consumers in the power market. At the same time, we see high growth in new business areas such as PTC retail, advisory services, portfolio management services and energy efficiency services.

What is your outlook for the power sector for the next few years?

The market of future refers to providers of reliable, robust and cost-effective power. Consumers are getting smarter in their power usage and are willing to pay a premium for reliable and quality power. Competition brought in by the power market helps in making power available at economical rates. We believe, in terms of the learning curve, the power trading canvas will increase from the present 10-11 per cent to a higher percentage, in line with that of the Western countries. Going forward, the adoption of new technology and ease of transaction will change the way we do business. Trading as a business will continue to grow as inevitable demand-supply mismatches increase. We expect to see trading in a more technology-driven avatar.