The Bombay Stock Exchange (BSE) Power Index tracks the share prices of 18 power companies operating across various segments of the industry and is weighted by free-float capitalisation. Over the past 12 months, it plunged 5.48 per cent, from 2,264.73 points on September 1, 2017 to 2,140.72 points on August 31, 2018. During the same period in the previous year, it had posted positive returns of 8.76 per cent. Transmission major Adani Transmission and Torrent Power, one of the biggest private integrated utilities, were among the best stock performers during the review period. At the bottom of the chart meanwhile, were equipment players Suzlon Energy Limited, Bharat Heavy Electricals Limited (BHEL), CG Power and Siemens India.

An overview of the stock market performance of key power companies during the period September 1, 2017 to August 31, 2018…

Generation companies registered a return of 5.33 per cent (unweighted average) in the current review period, which is a significant decrease in terms of growth as compared to their previous year’s performance, when they recorded a reasonable return of 11.03 per cent.

NTPC Limited, the largest power generator in India with an installed capacity of 53 GW, reported much lower returns, with its stock price increasing by only 1.61 per cent as compared to a 6.33 per cent rise during the same period in the previous year. Some of the major highlights for NTPC were the commissioning of a 500 MW unit of the Unchahar thermal power station (TPS), two 800 MW units of the Kudgi TPS, an 800 MW unit of the Lara Super TPS and a 660 MW unit of the Meja TPS. Recently, it also acquired the entire stake in its two joint ventures (JVs) with the Bihar State Power Generation Company. In 2017-18, NTPC achieved a stand-alone generation of 265.8 billion units (BUs), the highest ever in a year for the company, registering an increase of 6.19 per cent over the previous year. Its plant load factor (PLF) stood at 77.9 per cent, marginally lower than that recorded in 2016-17 (78.59 per cent), but still far better than the national average PLF of 60.7 per cent. It has a capacity of around 21,071 MW under construction. NTPC’s consolidated revenues increased by 7.36 per cent, from Rs 820.42 billion in 2016-17 to Rs 880.83 billion in 2017-18. However, its profit after tax (PAT) showed a decline of 4.88 per cent and stood at Rs 99.41 billion in 2017-18 as compared to Rs 104.51 billion in 2016-17.

NHPC Limited, the country’s largest hydropower producer, witnessed a drop of 12.28 per cent in its share price in the current review period as compared to a 5.23 per cent increase during the same period in the previous year. As of September 2018, it has an installed capacity of 7,071 MW. The company successfully commissioned its Kishanganga hydroelectric project in Jammu & Kashmir and its first 50 MW solar photovoltaic (PV) project in Tamil Nadu in the past year. It also has an under-construction hydro capacity of about 3,800 MW. NHPC achieved a plant availability factor of 85.32 per cent during 2017-18, against 83.41 per cent during the previous financial year. Its stations recorded a generation of 22,975 MUs during the year, marginally lower than that in 2016-17, when it generated 23,275 MUs. NHPC’s consolidated income stood at Rs 88.52 billion in 2017-18 as compared to Rs 101.25 billion in 2016-17, recording a 12.57 per cent decline. It also registered a decline in PAT of 20.29 per cent, from Rs 34.8 billion in 2016-17 to Rs 27.74 billion in 2017-18.

JSW Energy Limited registered an increase in returns of 8.66 per cent in its share price in the review period. Its installed capacity as of September 2018 stands at 4,543 MW. In 2017-18, the company’s net generation stood at 21.82 BUs and its PLF at 64.53 per cent. As part of its strategy to expand, JSW Energy is enhancing its presence in the renewable energy space, especially solar, as well as the electric vehicle (EV) and associated business of electrical battery/storage systems and charging infrastructure. The company plans to undertake an investment of over Rs 10,000 million in each of the two businesses in the current fiscal. Its total income (consolidated) increased marginally and stood at Rs 85.13 billion in 2017-18 as compared to Rs 84.8 billion in 2016-17. Meanwhile, it registered a profit of Rs 0.85 billion in 2017-18 as compared to Rs 6.22 billion in 2016-17, recording a decline of 86.33 per cent.

During the current review period, Torrent Power’s share price increased by 25.09 per cent. The positives in the company’s performance in 2017-18 were a significant reduction in aggregate technical and commercial losses in its distribution franchise areas, growth in energy sales in Ahmedabad and Surat, and higher operational capacity of its renewable power plants. The company’s total income rose by 14.95 cent, from Rs 102.44 billion in 2016-17 to Rs 117.75 billion in 2017-18. The net profit showed an increase of 121.9 per cent and stood at Rs 9.52 billion in 2017-18 as compared to Rs 4.29 billion in the previous year. 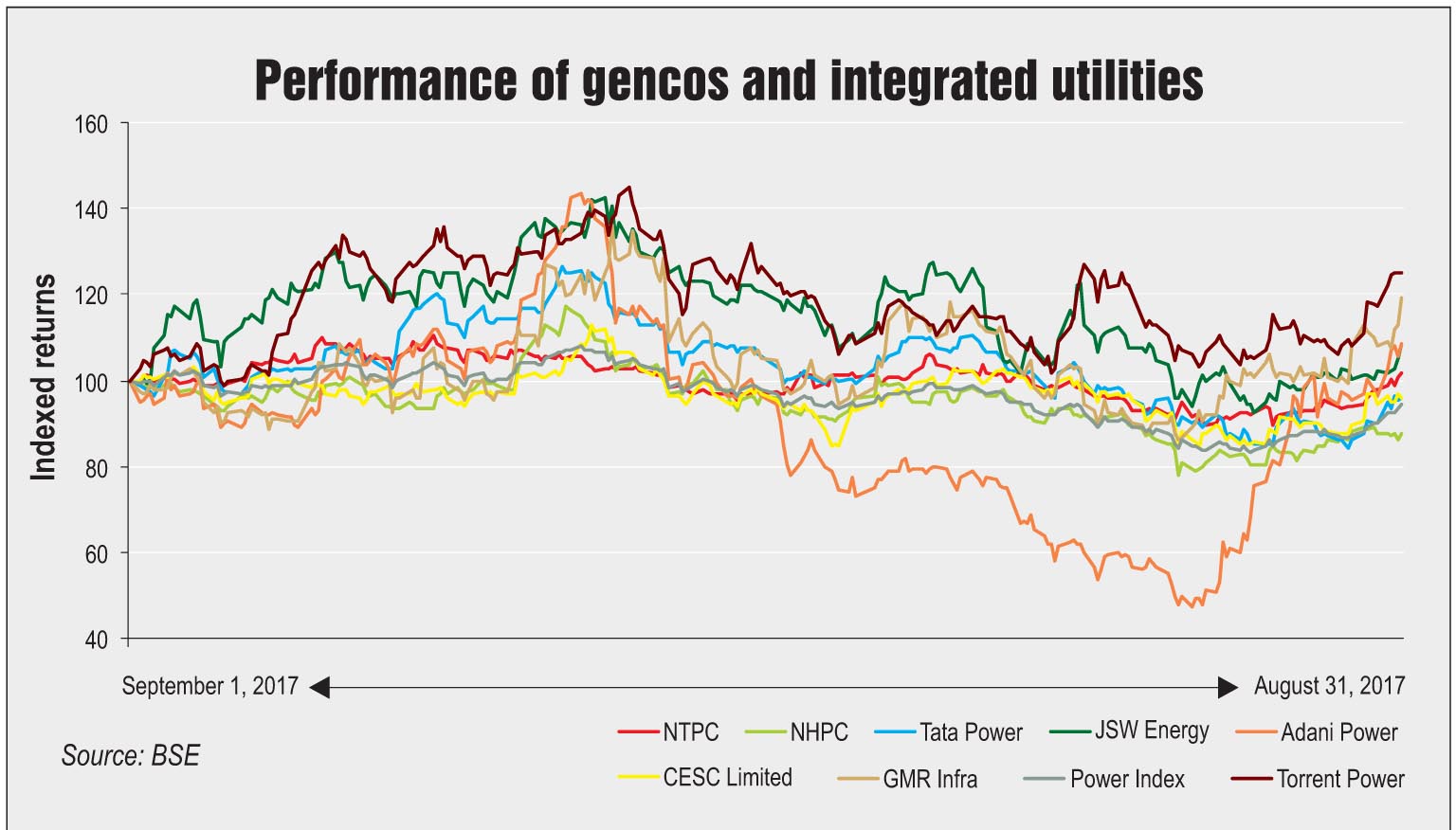 ATL has shown the highest increase in its capital amongst the companies tracked by the Power Index, with an increase of 78.89 per cent in its share price during the review period. It is currently the largest private transco with a cumulative transmission network of around 12,540 ckt. km, of which approximately 9,201 ckt. km is operational. The company maintained its transmission network availability at 99.9 per cent in 2017-18. A major highlight for the company was the completion of the acquisition of RInfra’s integrated Mumbai power distribution business with a transaction value of Rs 188 billion. ATL recently announced the setting up of a new entity and subsidiary, Adani Electricity Mumbai Limited, to house this acquisition. Another significant development for the company was the winning of the Fatehgarh-Bhadla Transmission Limited project through tariff-based competitive bidding. The company’s consolidated income stood at Rs 40.55 billion in 2017-18 as compared to Rs 28.97 billion in 2016-17, recording a 39.9 per cent increase. Meanwhile, the net profit increased from Rs 4.16 billion in 2016-17 to Rs 11.42 billion in 2017-18. 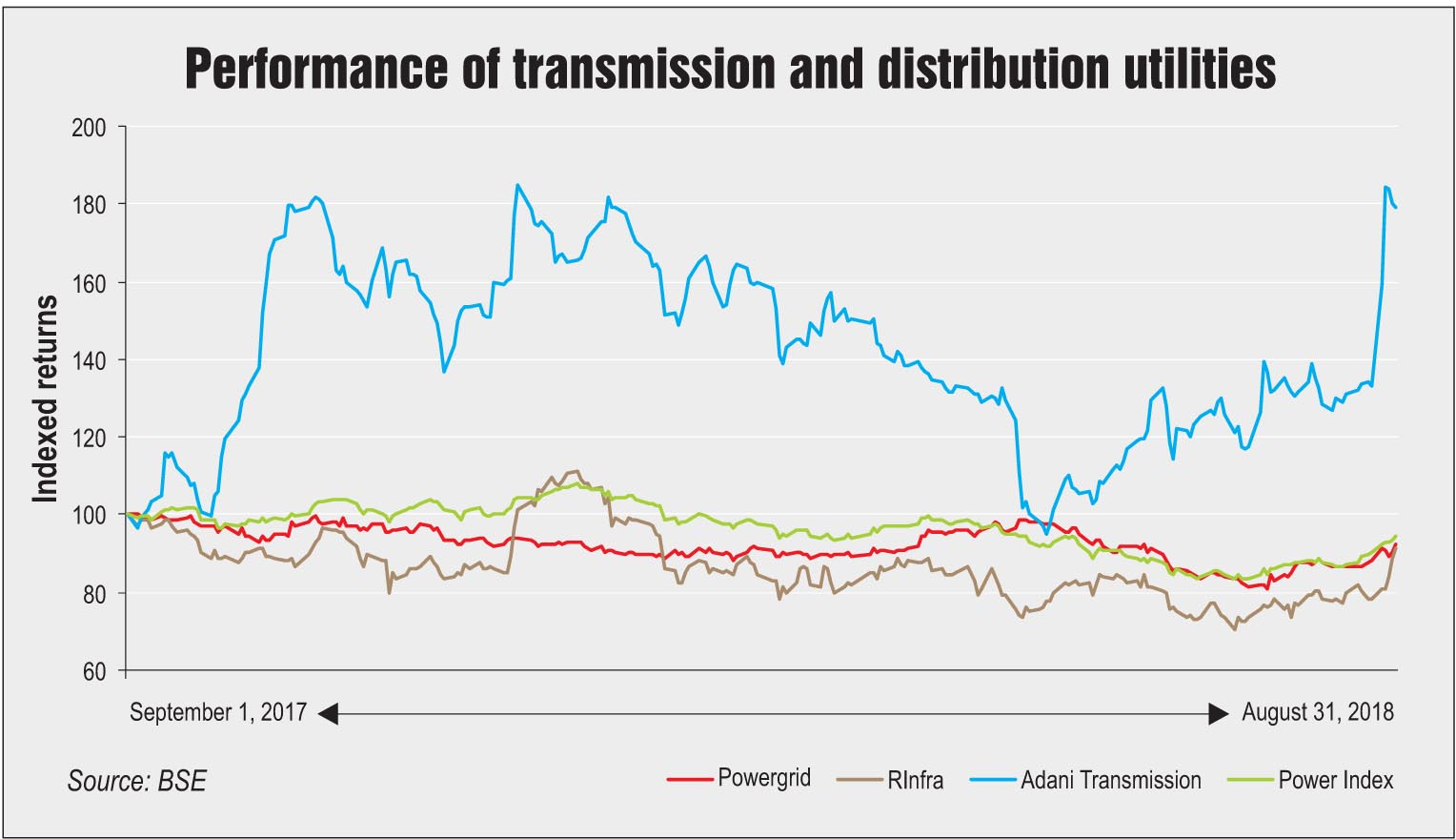 BHEL’s share price declined by 38.02 per cent during the review period. The company commissioned a total of 4,149 MW of power generating capacity during the year. With this, the total installed base of power generation equipment supplied by BHEL exceeds 183 GW. The total orders in hand with the company stand at over Rs 1,180 billion, which is the highest amount of orders for the company in the last five years. The company recorded a consolidated revenue of Rs 290.75 billion in 2017-18 against Rs 297.31 billion in 2016-17, registering a marginal decline. The net profit registered a decline of 3.74 per cent and stood at Rs 4.38 billion in 2017-18 against Rs 4.55 billion in 2016-17.

ABB registered a capital loss of 1.51 per cent in its share price during the period under consideration. In the past year, the company delivered a 110 kV digital substation for India’s largest IT park. It also touched the 10 GW milestone for clean power, including 5 GW from wind generators and 5 GW from solar inverters. In support of the drive to reduce carbon emissions, the company plans to install solar inverters at 750 railway stations in northern India. The company’s revenue registered a growth of 8.25 per cent in the last fiscal (January to December 2017) with a total revenue of around Rs 94.96 billion as against Rs 87.13 billion in 2016. The net profit for the year 2017 was Rs 4.2 billion, 12.3 per cent more than the profit of Rs 3.76 billion recorded in 2016.

Siemens India witnessed a capital loss of 21.96 per cent in the review period. One of the major achievements of the company in the past year was the commissioning of a 500 MW high-voltage direct-current link between India and Bangladesh. The company posted a net profit of Rs 11.4 billion in financial year 2017 (October 2016 to September 2017), which is a 60.82 per cent decrease on a year-on-year basis. The total income stood at Rs 116.56 billion in financial year 2017 as against Rs 109.99 billion in the previous fiscal.

Thermax witnessed an increase of 16.67 per cent in its share price during the period under review. The company recorded its highest order booking in 2017-18 of about Rs 63.8 billion, 45.2 per cent more than that in the previous fiscal. Among its major achievements during the last year, Thermax concluded a boiler-turbine-generator order of Rs 32.7 million for a 130 MW captive cogeneration power plant and commissioned a 5.76 MW rooftop solar PV captive power plant. Its total income stood at Rs 46.02 billion in 2017-18, marginally lower than the income of Rs 47.03 billion recorded in 2016-17. The net profit recorded for the year 2017-18 was Rs 2.31 billion as compared to Rs 2.16 billion in 2016-17, registering a growth of 6.94 per cent.

CG Power witnessed a capital loss of 27.62 per cent during the review period. In a major achievement in the past year, CG Power won a tender worth Rs 1,070 million from Energy Efficiency Services Limited for the supply of energy efficient low tension motors. The company examined the recoverability of certain overdue/non-recoverable assets and, after analysis, chose to write these off and hence, the company’s net loss widened in 2017-18 and stood at Rs 11.65 billion as compared to a net loss of Rs 4.9 billion in 2016-17. The company’s total income in 2017-18 was Rs 63.27 billion as compared to Rs 59.91 billion in 2016-17, registering a rise of 5.61 per cent. 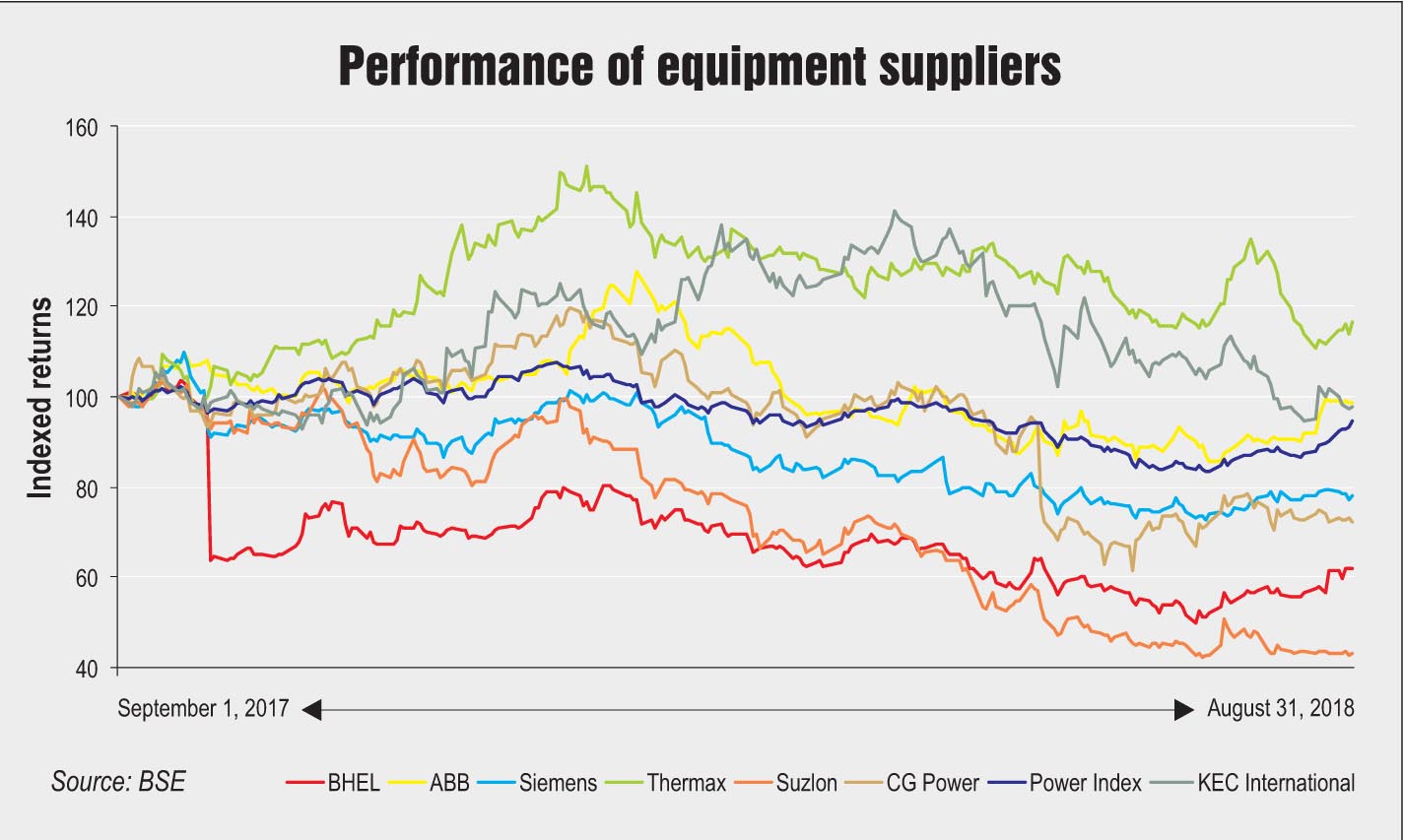 Despite the challenges faced by power sector companies, it is expected that the sector will gain momentum with the support of government initiatives. The Ujwal Discom Assurance Yojana is directed at improving the financial performance of loss-making state distribution utilities. At the same time, the government is taking several measures to help stressed power plants. Going forward, the demand for power is expected to grow in order to cater to the continued economic growth of the country, thereby creating more volume in the power market. Further, the target of providing universal access to power would result in a significant addition of generation capacity as well as expansion of the T&D network.