Emissions from coal combustion include particulates, sulphur oxides (SOx), nitrogen oxides (NOx) and high levels of CO2. Emission control can be undertaken by coal-based power plants at various levels. The pollutant ingredient can be removed from the coal at source, or it can be converted into an easily removable product at a later stage. Further, CO2 can be captured and stored to reduce its impact.

Emission control at source can be done in different ways through various clean coal technologies. The key among these are supercritical and ultra-supercritical technologies. By deploying these technologies, operators can increase plant efficiency, thereby reducing coal consumption and the pollution levels. Another technology is circulating fluidised bed combustion (CFBC), which reduces the emissions at source by adding materials that help lower emissions such as limestone. Coal gasification is also a clean coal technology, wherein the pollutant is gasified and downstream equipment is used for generating power.

The deployment of supercritical technology is the most popular method of reducing emissions. These technologies are suitable for high capacity plants and highly flexible as they work in sliding pressure mode where one can increase the load without affecting a large range of operational parameters. Supercritical boilers operate in high temperature and high pressure conditions, resulting in reduced fuel consumption as well as lower greenhouse gas emissions. For every one bar improvement in main steam pressure, the turbine heat rate reduces by approximately 0.015 per cent. The technology provides the high efficiency, low emission benefit. Further, from an environmental perspective, they reduce ash production, as well as SOx, NOx and CO2 emissions for each unit of electricity generated. A limitation of this technology is that at higher temperatures, the requirement for coal goes up. Between 2012-13 and 2016-17, capacity addition of supercritical coal power plants contributed around 42 per cent of the total coal-based capacity addition. Notably, 36 supercritical units were commissioned by the private sector against the total of 51 supercritical units commissioned during the five-year period.

To encourage the adoption of supercritical technologies, the government has introduced a policy for the automatic transfer of letter of agreement/coal linkage (granted to old plants) to new plants in case of scrapping of old units. The retirement of old and inefficient units of thermal generating stations and their replacement with new and more efficient supercritical units is another initiative being taken.

Meanwhile, ultra-supercritical plants operating at a higher temperature and pressure (approximately 600 °C and 32 MPa respectively) are being introduced in the country. The efficiency of these plants is as high as 44 per cent. They require low coal usage per kWh of electricity generated and produce less CO2 emissions. However, the extreme operating parameters impose stringent requirements on input materials. The Indian market is already taking steps to implement these new technologies. Much of the upcoming capacity is based on ultra-supercritical technology. About 15 GW of under-construction capacity is based on supercritical or ultra-supercritical technology as per industry estimates.

Meanwhile, the deployment of advanced ultra-supercritical (A-USC) projects is currently at the research and development (R&D) stage worldwide. In India, under the national mission for the development of clean coal technologies, an R&D project is being undertaken to indigenously develop A-USC technology with steam temperature of around 700 °C. NTPC, the Indira Gandhi Centre for Atomic Research and Bharat Heavy Electricals Limited have signed an MoU for the development of A-USC technology. The technology will yield a targeted efficiency of 45-46 per cent against 38 per cent subcritical and 41-42 per cent supercritical efficiency. 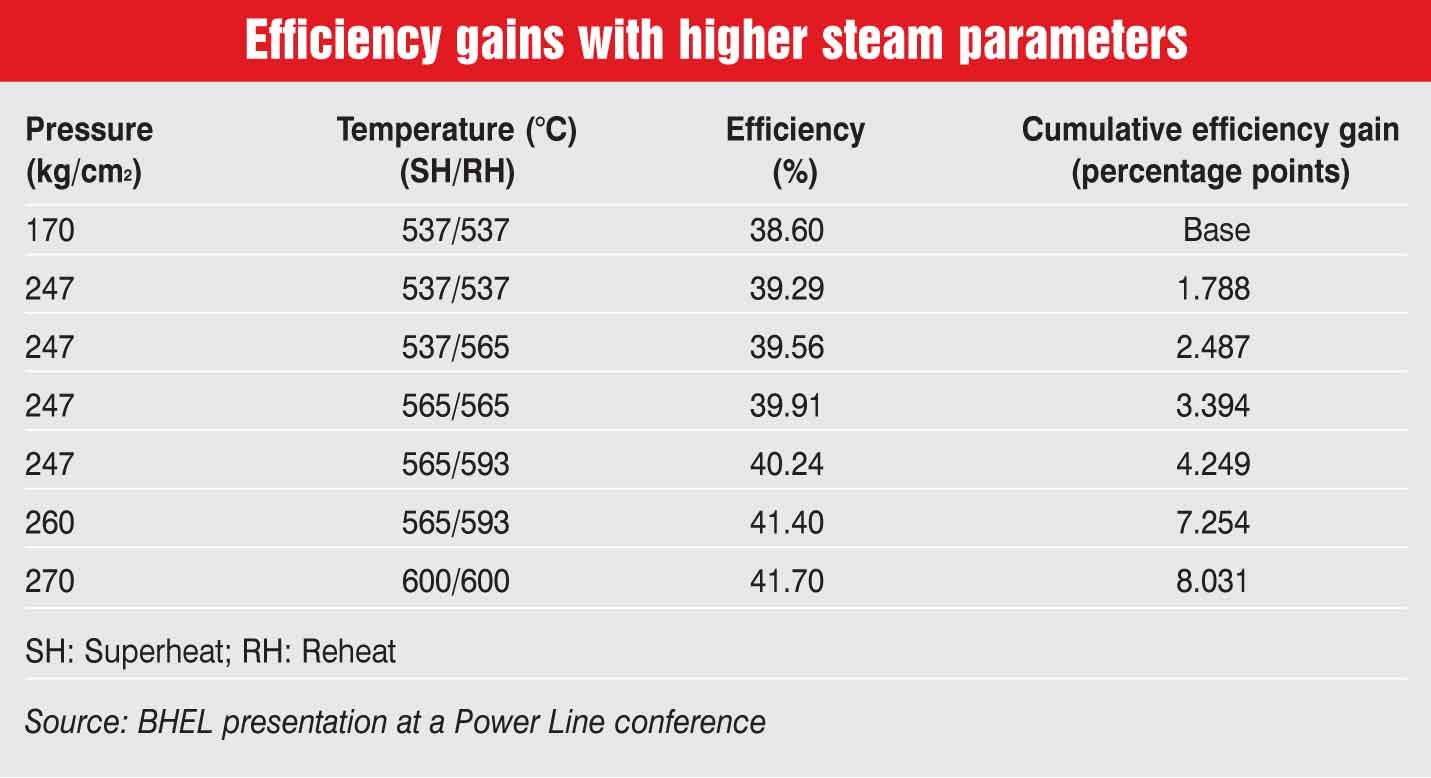 CFBC is a commercially available technology used for power generation/ cogeneration. CFBC allows greater flexibility to power plants for burning a wide range of coals and other low-grade fuels. Apart from fuel flexibility, CFBC boilers produce low SOx emissions due to the efficient capture of sulphur in the furnace with the help of limestone. Further, the low combustion temperature and air-staging reduce NOx emissions. This also brings down the capital costs associated with selective catalytic reduction and flue gas desulphurisation equipment. Also, slagging and corrosion are minimised in a CFB furnace, and soot blowing is only necessary in the heat recovery area of the unit.

Integrated coal gasification and combined cycle (IGCC) operates on two technologies. The first is coal gasification, which uses coal to create a clean burning gas called synthesis gas or syngas. Under this process, coal is combined with oxygen in the gasifier to produce a gaseous fuel, mainly hydrogen and carbon monoxide. The gas is then cleaned through a gas clean-up process, by cooling and removal of undesirable components, such as carbon dioxide and sulphur. The second technology is combined cycle, which is the most efficient, commercially available method of producing electricity today.

IGCC currently operates at a low scale globally. This is mostly because such a technology needs to have a gasification plant along with a bottoming cycle plant. Another factor that reduces its applicability is the economic viability of IGCC given its high cost and capital-intensive nature (capital cost in these plants is almost 20-25 per cent higher than that of conventional plants).

However, emission control and savings compensate for the high capital costs. Another emerging technology is carbon capture and storage. The deployment of CO2 capture and storage entails injecting CO2 into oilfields to produce additional oil. However, its long-term impact on the environment and the impact of possible pilferage or leakage on groundwater are yet to be studied. While experts predict a high 99 per cent containment under this model, credible data for a long period (at least 30 years to 40 years) would be needed to study the impact of capture and storage. Similarly, issues of cost and safety with regard to transportation also need to be considered.

In recent times, as renewables have taken centre stage, capacity additions from coal have started to dwindle. The share of coal-based power in the energy mix will gradually decrease. To ensure that coal-based power plants remain relevant, there is a need to find cleaner ways of coal power generation.