The transmission network in India has grown significantly over the past few years driven by the need to support the growing load and provide connectivity to generation projects. Between 2012-13 and 2017-18, the transmission line length grew at a compound annual growth rate of over 7.3 per cent and alternating current (AC) substation capacity grew at about 11.8 per cent.

Going forward, with the increasing renewable energy generation, the grid is expected to extend to far-flung areas. As the gestation period of renewable energy projects such as solar and wind is short, the associated transmission projects need to be completed at a fast pace in order to facilitate the evacuation of energy. This requires speedy development of transmission lines and towers using advanced technologies such as light detection and ranging (LiDAR) for surveying, drones for patrolling and helicopters for tower erection and stringing.

Power Line takes a look at the trends in the transmission segment, key growth drivers, new technologies and designs in the market, and the segment outlook…

Overview of the transmission network

The interregional transmission capacity has also grown significantly over the years. It stood at over 86 GW as of March 2018. Powergrid added 11,400 MW of interregional power transfer capacity in 2017-18, which further boosted the exchange of power across regions. By 2021-22, the capacity is proposed to be increased to 118 GW.

The transmission network infrastructure is expected to undergo significant expansion in the coming years. As per the TARANG web portal, 112,420 ckt. km of transmission lines are under construction in the country as of October 2018. Between 2017 and 2022, around 107,490 ckt. km of line length, 333,479 MVA of substation capacity and 14,000 MW of HVDC capacity is expected to be added.

For the integration of 175 GW of renewable energy by 2022 and 275 GW by 2027, adequate transmission infrastructure needs to be developed. High capacity green energy corridors are under implementation, which will facilitate the interconnection of large-scale renewables into the national grid. In addition, transmission schemes for 7,200 MW of ultra mega solar power parks are also under implementation in various states as part of the second phase of the green energy corridors scheme.

The electrical interconnections with neighbouring countries Nepal, Bhutan and Bangladesh are being further strengthened for increasing the exchange of power. Besides, new areas like railway electrification, electric vehicle charging and smart grids would require significant investments in transmission infrastructure.

Transmission line construction is a lengthy process, which involves various pre-construction surveys, erection of towers, stringing of conductors, earthing, and testing and commissioning. Pre-construction surveys consume a significant amount of time in the development of transmission projects. Typically, a walkover reconnaissance survey and route alignment survey is carried out to verify the physical features on the ground and determine the crossing points of major lines, railway tracks, rivers and villages/towns as well as the type of terrain and soil strata. However, these surveys are time-consuming and often inaccurate and therefore utilities are now deploying the latest surveying techniques such as LiDAR technology and drones.

LiDAR is used for carrying out aerial surveys to optimise route corridors for transmission lines and determine the position of towers through topographic mapping with the help of an aircraft. The data processed through a LiDAR survey can be directly linked to modelling software, which can provide the options for alignments, tower designs and tower positions at a minimum cost. Sterlite Power had deployed LiDAR technology at the Bhopal-Dhule transmission project to conduct topographic mapping with the help of aircraft.

Following the surveys, the transmission line route is fixed along with tower positions and crossing points and various statutory clearances and approvals are applied for. Then, a tower schedule is prepared, which contains information such as location, numbers, type of tower, span length, section length, sum of adjacent spans, weight spans under maximum and minimum sag conditions, angle of deviations, type of hardware (suspension/tension, single/double), and brief details of objects in, along and near the line route. Utilities are also deploying drones to assess the potential site locations, design site layouts, generate 3D visualisations and make RoW estimations. Powergrid is deploying helicopters equipped with LiDAR and thermovision cameras for aerial patrolling and operations and maintenance of transmission lines and towers. 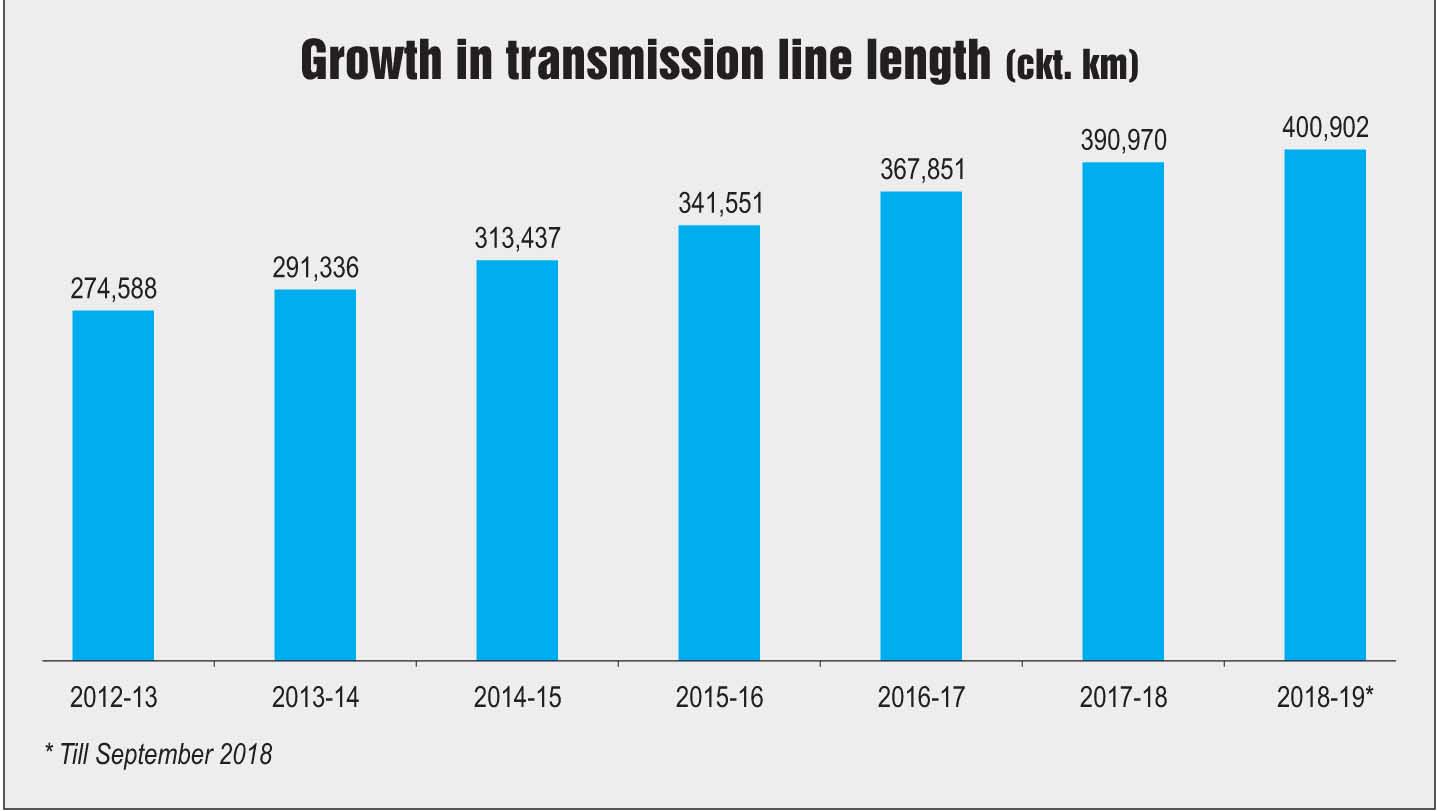 The towers are erected on the foundations after concreting using methods such as the built-up method, section method and the ground assembly method. The built-up method is the most widely used method for tower installation. In this method, each tower member is installed in a sequence from top to bottom. First, the four main corner legs of the first section are erected and guyed off. Then, the cross-arms are assembled on the ground and later fixed to the main body of the tower. In the section method, the major sections of the tower are assembled on the ground and are then erected as units, using a mobile crane or a gin pole.

While stringing conductors and earth wires, earth wire or optical ground wire is usually strung first on the top arms of the tower followed by accessories on the lower arms and power conductors. The stringing of power conductors is done manually using aerial rollers/pullers, tensioners, winches, etc. to provide the correct sag. Towers are provided with stays/anchors to balance one-sided load on them when stringing is done initially on one side only.

Of late, helicopters are being used for the erection of towers and stringing of conductors, particularly in inaccessible mountainous regions. Sterlite Power deployed helicopter stringing for the 765 kV Bhopal-Indore and 400 kV Bhopal lines. This helped reduce the transmission line shutdown time, resulting in minimal disturbance to the local community and the environment.

Sterlite Power also deployed air cranes to set up a power transmission line in Jammu & Kashmir under the Northern Region System Strengthening XXIX (NRSS 29) project. The helicranes were used to air-drop about 3,500 tonnes of material to overcome terrain challenges in the Pir Panjal range. To this end, the company partnered with the US-based Erickson Inc. It installed transmission towers in the Pir Panjal ranges using Erickson’s S64 Aircrane, a heavy-lift helicopter. Notably, the project was commissioned two months ahead of schedule.