India’s reliance on coal as the dominant source of power generation continues, with it accounting for about 75 per cent of the total generation in 2017-18. However, the segment faces multiple challenges. Slow capacity addition, stricter environmental norms and shortages in coal supply have raised concerns regarding the future of coal-based power in the country. The naumber of stressed assets has risen significantly, owing to issues such as coal shortages, inadequate demand from distribution companies, and lack of power purchase agreements. India’s climate change commitments and the rapid development of renewable energy sourc es, along with a decline in renewable energy tariffs have put coal in an even more unfavourable position. At the same time, coal remains critical in meeting baseload and balancing power needs for intermittent renewable power. A look at the trends in the coal-based generation segment and its future outlook…

The generation from coal-based power plants has increased at a CAGR of 7.23 per cent over the past five years, from 746 BUs in 2013-14 to 987 BUs in 2017-18. In the first seven months of 2017-18 (April-October), around 596 BUs of coal-based power has been generated, recording a year-on-year growth of about 5 per cent. While generation has continued to increase, the year-on-year growth has slowed down. This has been mainly due to the declining PLFs of coal-based power plants, owing to low demand for power and shortages in fuel supply. Between 2013-14 and 2017-18, the average PLF declined by around 5 percentage points, from 65.5 per cent to 60.52 per cent. During the current year (as of October 2018), the all-India PLF has been 61 per cent, slightly better than the 58.8 per cent PLF during the same period in the previous year.

During 2013-14 to 2017-18, coal production from Coal India Limited (CIL) and Singareni Collieries Company Limited (SCCL) grew at a CAGR of 5.25 per cent. In the first half of 2018-19 (April-September), the total coal production from CIL and SCCL stood at 285 million tonnes (mt), marking an increase of 9.75 per cent year on year. Coal offtake during the same period stood at 322 mt, of which coal despatch to the power sector accounted for almost 80 per cent. Between 2013-14 and 2017-18, total coal imports grew at a CAGR of 6.3 per cent to reach 208 mt. On a year-on-year basis, coal imports witnessed an increase of 9.5 per cent during 2017-18. In 2018-19 (April-October), coal imports reached 134.5 mt, recording a year-on-year growth of almost 8 per cent. Despite the increase in coal production, coal availability at TPPs has been under pressure in recent months, owing to various factors. These include evacuation and transportation constraints, a sudden increase in coal demand, and a decline in coal output from certain mines owing to flooding and heavy rains. This is reflected in the coal stock position across power plants in the country. As of October 31, 2018, the total coal stock at power plants was about 10.08 mt, sufficient only to meet the coal requirement for six days. About 29 power plants had a critical coal stock (less than seven days), of which 19 plants were facing supercritical stock (less than four days). 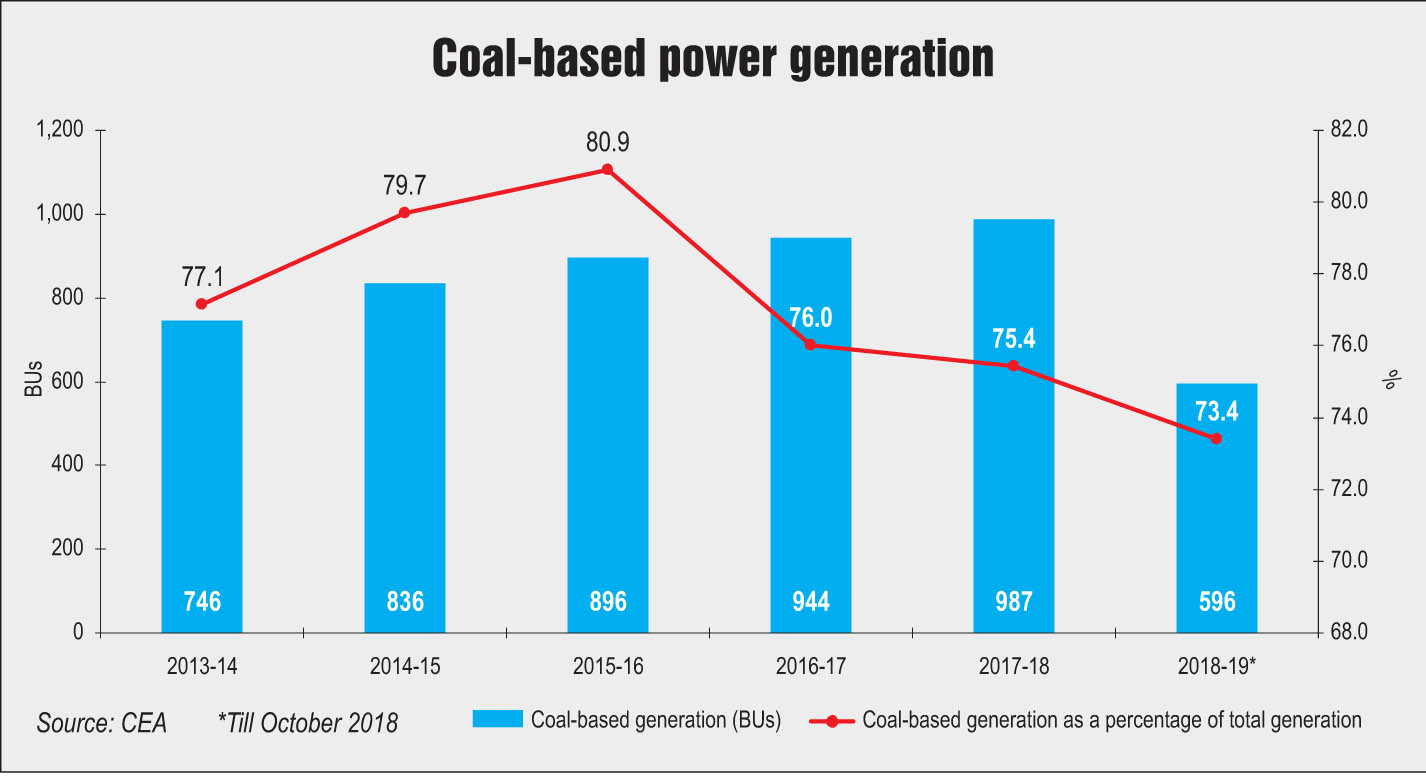 Fuel shortage is one of the key concerns facing the coal-based generation segment. The primary reason behind the coal shortage is the lack of rack availability and transportation constraints. In addition, there is a lack of power demand from distribution companies, which has further burdened generators. As of March 2018, there were 34 power projects, aggregating over 40 GW of capacity and entailing a cumulative debt of Rs 1,744 billion, which were stressed/non-performing assets. The majority of these are coal-based power projects. Another challenge in coal-based power generation is meeting the stringent environmental norms. The installation of emission control technologies involves high costs and is likely to result in additional operations and maintenance costs. Moreover, banks and other financial institutions have been reluctant to fund these investments due to the already high level of stress prevailing in the sector. With the growing influx of renewable energy, the demand for coal-based power has been declining. Moreover, coal plants are subjected to cyclic or frequent ramp-ups and ramp-downs in order to balance renewable-based power, making them less efficient and resulting in higher maintenance requirements and shorter equipment life. 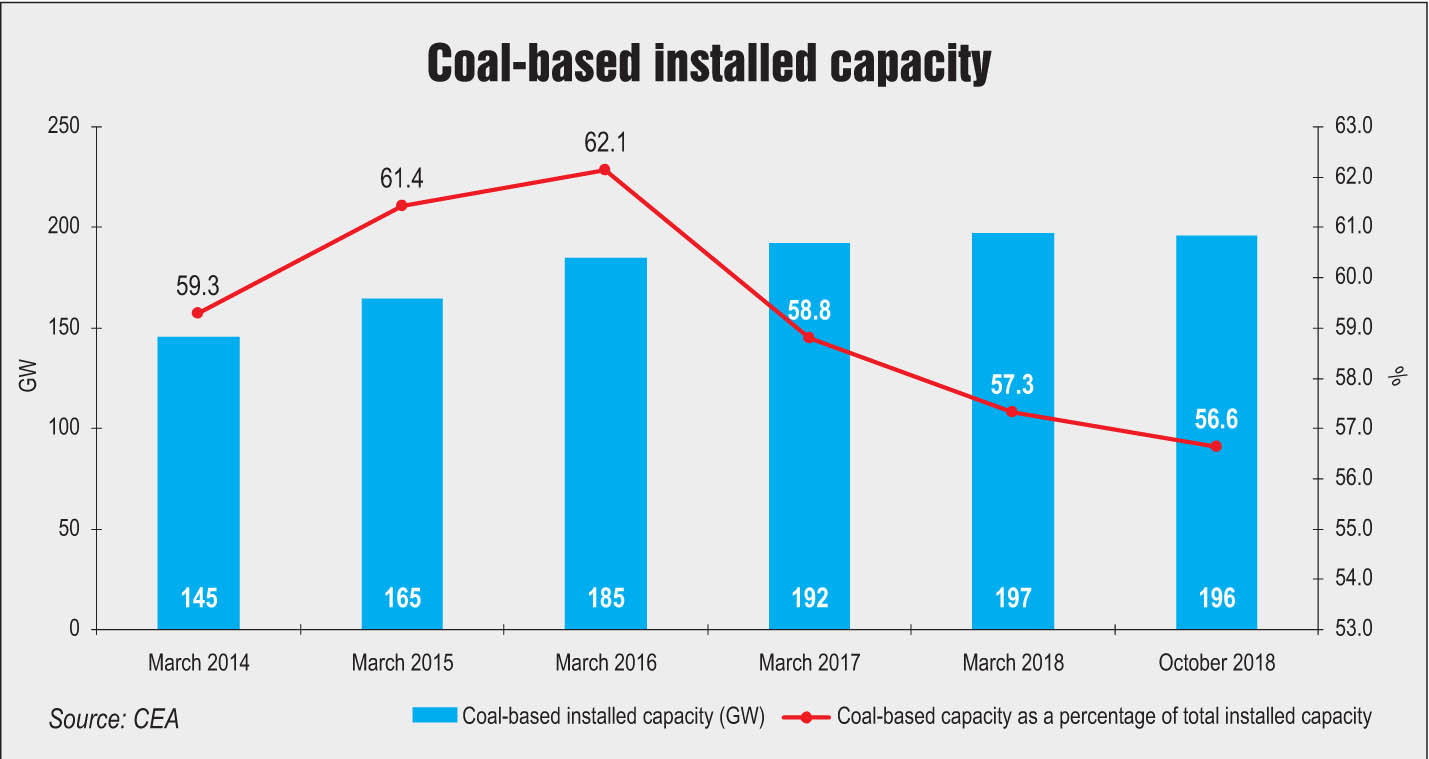 The government has taken a number of steps to resolve the issue of stressed assets and improve coal supply to power plants. A high-level empowered committee has been set up under the cabinet secretary to address the issue of stressed assets in the power sector.  In a significant step towards bailing out the stressed power plants operated by the Adani, Tata and Mundra groups in Gujarat, the Central Electricity Regulatory Commission (CERC) is reviewing their PPAs, as per the directives of the Supreme Court. The CERC is expected to suggest appropriate amendments to compensate power producers for the increase in the cost of imported coal. In another move to provide relief to stressed power plants, in April 2018, the Ministry of Power introduced a pilot scheme to procure electricity from power plants without PPAs. Under the scheme, the government plans to procure 2,500 MW of power through medium-term contracts. PPAs under this scheme are expected to lower the burden for discoms and lead to efficient utilisation of some of the coal-based stressed power plants. In October 2018, agreements have been signed for 1,900 MW of capacity. With regard to improving coal supply, new lines are being laid for coal transportation. The railways is also increasing the rake availability for ferrying coal. Going forward, the rail projects under implementation by Indian Railways and coal companies are expected to facilitate the evacuation of higher coal volumes. For power plants that do not have coal linkages, long-term linkages are available through auction under the Scheme to Harness and Allocate Koyla (Coal) Transparently in India (SHAKTI). In the first auction under SHAKTI, over 9 GW of capacity was awarded coal linkages at a discount of 1-4 paise per unit to the quoted tariff in their respective PPAs. Further, NITI Aayog has initiated work on a policy that aims to suggest long-term infrastructure and planning requirements for coal production and transportation to meet the country’s long-term coal demand through domestic sources to the extent possible. To facilitate the implementation of emission control technologies, the government has issued a notification stating that investments in these technologies will be considered for pass-through in tariffs. In addition, the government is contemplating assigning public financial institutions such as the Power Finance Corporation and the Rural Electrification Corporation to fund investments in these technologies. While the share of coal in the energy mix is expected to decline as it gets displaced by renewables, it is likely to continue to account for the majority share in power generation. However, renewables will change the way coal plants are operated and bring in flexibility in their operations. Meanwhile, the capacity is expected to reach 238 GW by 2026-27, as per the CEA. Over 60 GW of capacity is already under construction and is expected to be completed by 2021-22. Of this, about 7 GW is expected to be commissioned in 2018-19 and another 7 GW is stalled due to reasons, including financial constraints, payment-related issues and contractual issues.

Going ahead, one of the key focus areas will be mitigating the environmental impact of coal-based power plants. To this end, greater emphasis is likely to be placed on the use of washed coal, implementation of supercritical technologies, and renovation and modernisation of old and inefficient power plants.

April 8, 2017
Despite having significant potential, hydropower development in India has been rather slow. Against an estimated potential of [...]
More