Over the past few years, the installed generation capacity has recorded enormous growth. However, much of this capacity addition has taken place without fuel supply agreements (FSAs) and power purchase agreements (PPAs)  with distribution companies. These factors along with delays in project implementation, slow growth in power demand, inability of discoms to pay the generators and regulatory and legal issues have caused stress for power projects and resulted in their inability to service their debt.

Amongst other initiatives, the Government of India constituted a High Level Empowered Committee (HLEC) in July 2018 to address the issue of stressed thermal power projects (TPPs). The committee submitted its report last month. In the report, the committee has proposed a slew of measures to resolve the coal supply issues, facilitate the sale of power from the stressed plants, and overcome regulatory and discom-related issues.

A look at the key submissions of the report…

In March 2017, the Department of Financial Services provided a list of 34 coal-based TPPs, mostly private, totalling 40,130 MW of capacity and Rs 1,744 billion of outstanding debt, which were considered “stressed” by the Ministry of Power. Stressed power assets have been under discussion since then. In February 2018, the Reserve Bank of India (RBI) revised its guidelines on the resolution of stressed assets. It asked lenders to come up with restructuring plans within 180 days of a company defaulting on repayment and mandated a one-day delay in debt-servicing as default. If banks are unable to implement a restructuring scheme within this period, the case goes for insolvency and bankruptcy proceedings. This was introduced specifically for assets with loans of Rs 20,000 million or above. With most of the power projects falling in that category, it would have led to large losses, not only for the owners of these power plants but also for banks. This triggered the need for identifying specific solutions for the power sector.

In pursuance of the orders of the Allahabad High Court (May 2018), the Ministry of Finance submitted a report on July 17, 2018 on the stress in the power sector subsequent to which, the Government of India constituted an HLEC on July 29, 2018 to address the issues of stressed TPPs. The HLEC was chaired by the cabinet secretary, P.K. Sinha, and included members from various ministries (power, coal, and petroleum and natural gas) as well as financial institutions (Power Finance Corporation [PFC], REC Limited, State Bank of India, Punjab National Bank and ICICI Bank). The committee, after a round of meetings and deliberations, submitted its report on November 20, 2018.

Various power plants have been plagued with operational, regulatory and financial issues, leading to stress in servicing debt. The HLEC has identified the primary drivers of this stress as constraints in coal supply due to the absence of coal linkages from Coal India Limited (CIL) and the cancellation of 204 coal mines  allocated to various companies by the Supreme Court in 2014; a large quantum of capacity lacking PPAs; slow power demand growth coupled with supply surplus leading to underutilised capacity; delays in the realisation of receivables from discoms; and aggressive tariffs quoted by private sector project developers without proper due diligence. Other factors such as the lack of continued funding, sluggish project implementation, friction with banks and financial institutions, regulatory and contractual disputes, legal complications related to auctioned coal mines, and operational issues such as delays in land acquisition, inadequate transmission availability and delays in statutory clearances have further led to cost and time overruns and an unprecedented amount of stress to projects.

The HLEC, in its report, has also acknowledged the steps taken by the government to alleviate the stress faced by power plants. The most noteworthy of these steps are the award of fuel linkages under SHAKTI, the revision of the methodology for computation of  coal escalation index, the allowing of pass-through of any impact on cost due to a change in law, notification of a scheme for the procurement of 2,500 MW of untied capacity and enhanced monitoring of payments by discoms through PRAAPTI (Payment Ratification And Analysis in Power Procurement for Bringing Transparency in Invoicing of Generators) platform.

While the causes are known and the above measures taken by the government are likely to ease the stress on generation projects in due course, the HLEC has suggested some more focused measures aimed at the revival of stressed assets. These are discussed in the next section.

To deal with the issue of coal supply, the committee has proposed allowing coal linkages to be used against short-term PPAs. Moreover, there should not be any restriction on the sale of power through the Discovery of Efficient Energy Price (DEEP) portal in the short-term or the day-ahead market through the power exchanges. In addition, the committee has recommended providing short-term (for example, three months) coal linkages.

Generators should be able to terminate PPAs in case of a default in payment from the discoms, with the facility to use the linkage for short-term PPAs (for a period of a maximum of two years or until another buyer of power is found under the long/medium term). Currently, they are not allowed to do so, which prevents them from terminating their PPAs because, in the absence of a valid PPA, the generators are bound to lose the coal linkage and long-term open access (LTOA) for transmission as well. Hence, allowing generators to use coal linkages for short-term PPAs will not only help the plants to continue operations and service debt, but also help in inculcating a sense of discipline in the discoms regarding timely payment to generators.

The committee has also suggested designating a nodal agency that may invite bids for procuring bulk power for the medium term, for three to five years, in appropriate tranches, against pre-declared linkages by CIL. This can be done by modifying the SHAKTI scheme. This will assure coal supply to the generator and also secure its payment, which will be routed through the nodal agency.

On the lines of the government’s pilot scheme for the procurement of 2,500 MW of power, the committee has suggested that central PSUs like NTPC Limited should act as an aggregator to procure power through a transparent competitive bidding process from stressed power plants and offer the same to discoms. 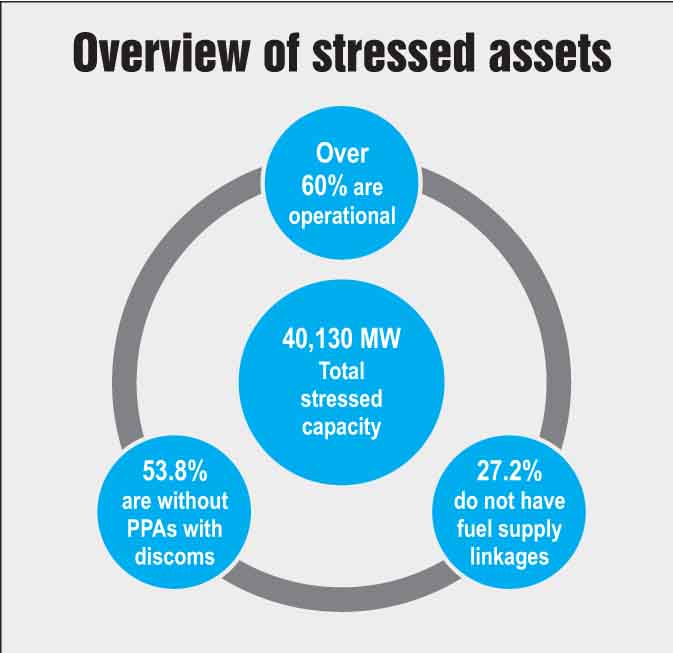 Amongst the other recommendations to resolve the coal allocation issue, the committee has suggested earmarking at least 60 per cent of the total coal meant for e-auctions (including spot auction and special forward e-auction) for power. It has also recommended a one-time bidding. While the generator can bid to tie up PPAs with the discoms, coal  linkage should be granted at the notified price without any further bidding. Under the current regime, the generator has to first bid for obtaining coal linkage and then tie up PPAs within a period of two years from the date of grant of the linkage, which exposes the generator to a lot of uncertainty and risk. The committee has also recommended carrying over any shortfall in the supply of coal for reasons attributable to the ministries of coal or railways to the subsequent months, up to a maximum of three months. Further, to encourage efficient utilisation of coal, the HLEC has recommended determining the upper ceiling for the annual contracted quantity (ACQ) based on efficiency parameters, irrespective of the capacity and actual consumption of the plant. It has also suggested retirement of old plants with a high heat rate and those that do not comply with environmental norms. This will give way to new and more efficient plants that have remained underutilised.

To overcome the issue of late payments by discoms, the committee has recommended that public financial institutions (PFIs) such as REC and PFC discount the receivables from discoms and make upfront payments to the generators. The PFIs can realise their dues from the discoms over time and charge interest for the period of delay in payment by the discoms. Accounting for the high risk of non-recovery from discoms, it has further suggested that the PFIs should be covered under a tripartite agreement (TPA), according to which the RBI may recover the dues from the account of the states in case of a default by the discoms and make the payment to the PFI. It has also suggested mandatory implementation of the late payment surcharge in case of a delay in payment by discoms.

In case of a delay in the commissioning of a project, the discoms may be advised not to cancel the PPA signed with the generator and keep the same on hold for a certain period of time. Further, the discoms, CIL, Power Grid Corporation of India, the Ministry of Environment, Forest and Climate Change, and appropriate governments should be advised not to cancel PPAs, FSAs, transmission connectivity, environment and forest clearances and all other approvals, even if the project is referred to the National Company Law Tribunal or is acquired by another entity. The clearances should be linked to the plant and not the promoter so that the plant can continue to operate even after the ownership changes.

The report has seen a positive response from the industry as a whole. The committee has made clear efforts to extensively address the issues faced by stressed power assets. The suggestions put forth by the HLEC are expected to help not only the stressed assets but also power plants in general. However, it has not prescribed any timeline for implementation. According to Ashok Khurana, director general, Association of Power Producers, a time frame for implementing these recommendations would help in ensuring expeditious implementation. He also feels that the committee should have looked into the pass-through of additional costs of coal procured through e-auctions for meeting the deficit of linkage coal.

Overall, industry experts believe that the HLEC recommendations can help the sector overcome the stress, if implemented in fast-track mode. However, it has left a number of action points for the ministries to undertake, which is likely to slow down implementation. To this end, a group of ministers (GoM) has been constituted under the order of the prime minster to examine the specific recommendations of the HLEC to address the issue of stressed power projects and forward their comments for consideration by the cabinet. The group will be headed by the finance minister and include the heads of other key ministries (roads, oil, commerce, power, railways) as members. The sector now awaits the comments of the group.