In order to tackle these, the Central Electricity Authority (CEA) has incorporated various electrical safety measures in its rules and regulations. It has also notified guidelines for the appointment of chartered electrical safety engineers (CESEs), which would help in swifter identification of electrical faults.

At the utility level, one of the electrical safety measures adopted by discoms is the use of aerial bunched cables (ABCs), which are insulated and are safe to touch. Further, in order to maintain safe operation of the cables, steps such as restriction on temporary joints, maintenance of copper screen continuity while making temporary joints and connecting copper screens to the messenger wire with fuse/conductor strand wire are taken. Besides, the use of insulation on the jumper helps prevent birds/animals from getting electrocuted and also in transient tripping due to birdage. An electrical hazard could be caused by heavy winds that make the bare conductors flutter and come in contact with each other, leading to conductor snapping. HT and LT spacers are useful in tackling this. While HT spacers are capable of bearing 19 kV phase-to-phase voltage, LT spacers are capable of bearing 1.1 kV phase-to-phase voltage.

With regard to the metallic electric pole, leakage on the poles could lead to an electrical accident. Also, there could be intermixing of neutral currents in different LT ABC feeders installed on the same pole due to bare neutral mounted on metal hardware. In order to prevent this, mini-insulators made of nylon are used, which prevent the leakage of current. Meanwhile, in order to prevent current leakage through the metallic crossarm, FRP crossarms made of sheath moulded compound are used. Besides this, an electric accident can occur in a distribution box wherein due to loose connections, a hotspot could be generated on the busbar, which could lead to the burning of the distribution box. The use of a fire-retardant distribution box, which is fully insulated and comprises touch-free busbars, helps prevent distribution box fires.

On the electrical transformer front, one safety measure is the use of transformer caps made of insulating material. This prevents electrocution of animals and birds when they encroach upon the HT bushing of a transformer. Overall, outdoor substations are prone to electrical hazards. Substations placed in a self-contained package are safer. Often, in these substations all the equipment is packed in separate compartments, which are individually accessible. 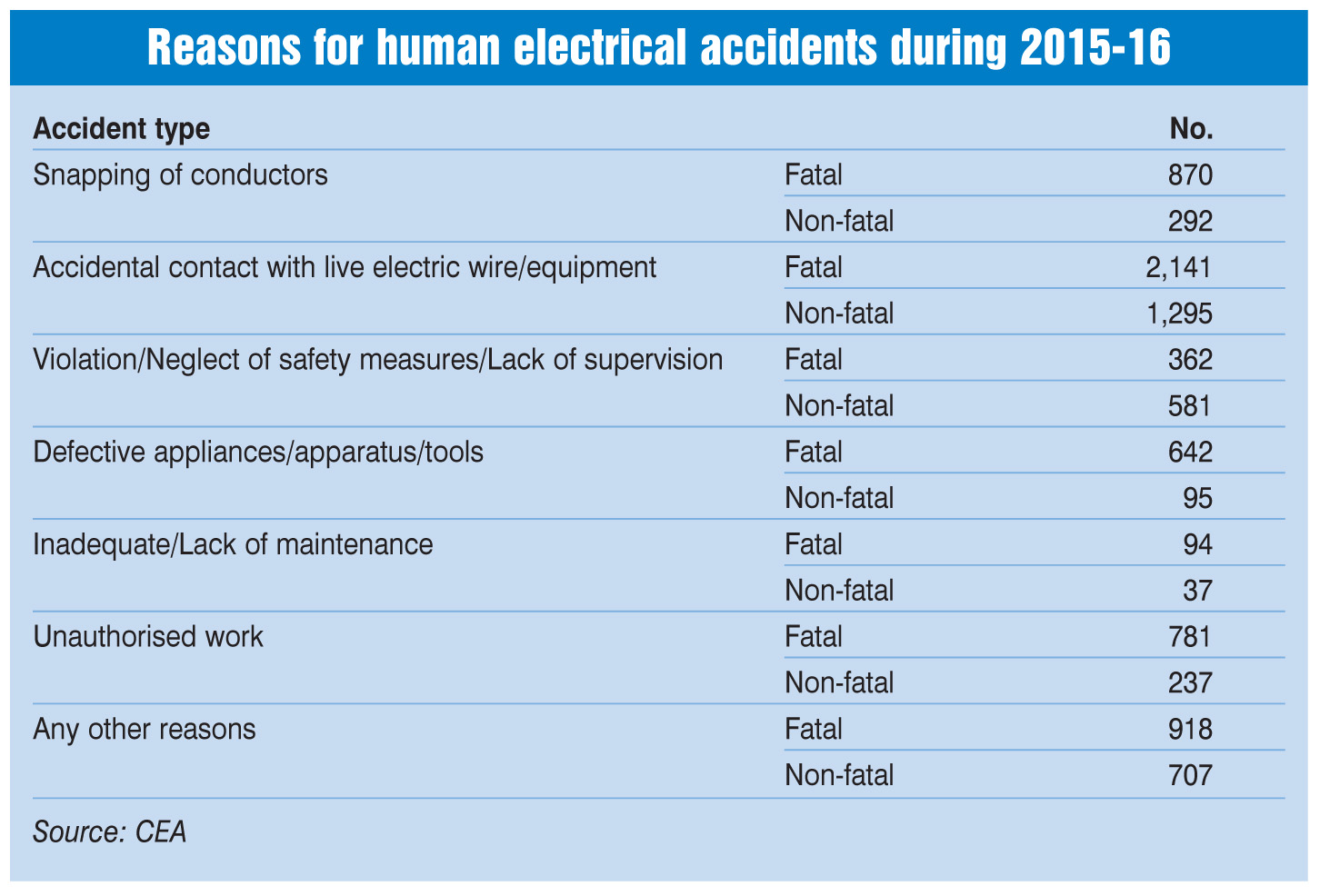 In order to address the issue of electrical safety, the CEA has adopted a three-pronged strategy. First, it has made amendments in the existing safety rules and regulations based on the needs arising from technological changes, and amendments suggested by the government, industry and the general public. The rules were issued in 2010 and later amended in 2015 and 2017. Second, the CEA has tied up with all state electrical inspectors through a standing committee on electrical safety. The committee is acting as a bridge between the centre and the states on the exchange of information and ideas for better implementation of electrical safety regulations. Third, the CEA is undertaking sensitisation of people across organisations dealing with electricity, electrical utilities and individual consumers through awareness generation campaigns. In the past three years, the CEA has undertaken various awareness programmes across the metro cities. It now plans to expand these programmes to other cities. It intends to undertake 12 awareness generation programmes each year across various states covering every region in the country.

Another recent initiative by the CEA for enhancing electric safety is the introduction of detailed guidelines for the appointment of CESEs under sub-regulation 5A of the CEA (Measures Relating to Safety and Electric Supply) Regulations, 2018. The CESE would assist consumers, suppliers or the owners with self-certification of their electrical installations. This would help expedite procedures to get charging approvals from the chief electrical inspector (CEI). The CESE would be responsible for undertaking the recommended tests as per the relevant standards and regulations. Also the CESE would keep a record of the tests in Form-I/Form-II/Form-III and submit it to the CEI. Besides this, the owner is mandated to carry out the recommendations made by the CESE. In case the owner fails to meet the recommendations, the CESE is required to inform the CEI within a period of 15 days from the expiry of the prescribed report. In case the CESE finds the installation to be dangerous for the use of electricity, it is required to bring it to the notice of the CEI within 48 hours of testing. The fee charged by the CESE would vary from Rs 3,000 to Rs 5,000, based on the frequency of the tests conducted.

At the recently held fourth meeting of the standing committee on electrical safety, the CEA advised all state governments to mandatorily use ABCs in place of conventional bare wires and cables for power lines passing through forest areas in order to save wildlife.

Further, with the uptake of electric vehicles (EVs), safety while charging is becoming a key focus area for policymakers. To this end, the CEA has issued the Draft Safety Provisions for EV Charging Stations. Among other things, these include requirements for earthing protection systems for charging stations as well as requirements to prevent fire at EV charging stations.

According to industry estimates, over 13 per cent of all fire-related accidents are caused by electrical short circuits. Among other reasons, poor quality wires and cables are the biggest culprit, with around 80 per cent of electrical short circuits occurring due to substandard cables, notes the Indian Electrical and Electronics Manufacturers’ Association. The use of low smoke zero halogen or halogen-free cables needs to be encouraged to combat these dangers. Further, the use of better electrical products, which only add nominally to the cost of construction, needs to be encouraged. Also, the industry feels that there is an urgent need for the centre, the states and provincial governments to jointly enforce more stringent fire safety regulations.

To conclude, it is necessary for electric utilities to undertake measures to ensure electrical safety depending on the needs and requirements of a particular area. Besides this, spreading awareness among discom employees and electricity consumers will go a long way in preventing electrical accidents.