While India’s power supply position has improved significantly over the past few years, power quality and reliability continue to be points of concern. Intermittent power supply and frequent outages directly affect the operations and profitability of industrial and commercial establishments, making power backup crucial for their operations. Diesel generator (DG) sets have been one of the most popular backup power solutions, not just for industrial and commercial power consumers, but also for residential consumers, owing to their quick start-up time, low initial investments, less space requirement, and ease of installation and operation. However, DG sets entail high operating costs, which are mainly on account of the high cost of fuel. In fact, fuel costs account for over 80 per cent of the total life cycle cost of a DG set. This has made diesel a less cost-effective solution for backup, especially in view of the drop in solar power prices.

Raw material prices have also been on the rise. Prices of pig iron, one of the key raw materials in a DG set, increased by almost 20 per cent in the first half of 2018-19. As a result, manufacturers are expected to raise prices to sustain their margins. While some manufacturers have increased the prices of their products, a number of them have kept their prices constant or in fact have reduced them in order to capture a higher market share. At the same time, there is downward pressure on the cost of DG sets with advancement in technologies and value engineering.

Fuel prices account for a major component of the primary costs of a DG set. As per the Environment (Protection) Rules, 2013, the specifications for commercial fuel applicable in DG sets are the same as those for commercial high speed diesel (HSD) used in diesel vehicles. HSD has higher thermal efficiency and lower cost as compared to other fuels.

As per the Petroleum Planning and Analysis Cell, the international prices of the Indian basket of crude oil stood at $56.43 per barrel in 2017-18 as against $47.56 per barrel in 2016-17. In India, diesel is available at a premium to crude oil. Diesel prices stood at $68.19 per barrel in 2017-18, an increase of 20 per cent from $56.59 per barrel in 2016-17. During April-November 2018, diesel prices further increased to $86.92 per barrel. Meanwhile, the retail selling price of diesel in Delhi (inclusive of excise duty, VAT and dealer’s commission) increased from around Rs 55.49 per litre in April 2014 to around Rs 65.27 per litre in April 2018, recording a compound annual growth rate of 4.1 per cent. As of December 2018, the price of diesel stood at Rs 64.54 per litre. The increase in diesel prices has been mostly on account of the deregulation aimed at reducing the subsidy bill. As crude oil prices went up, diesel prices also increased. However, the continuing increase in crude oil prices may force the government to regulate diesel prices again. 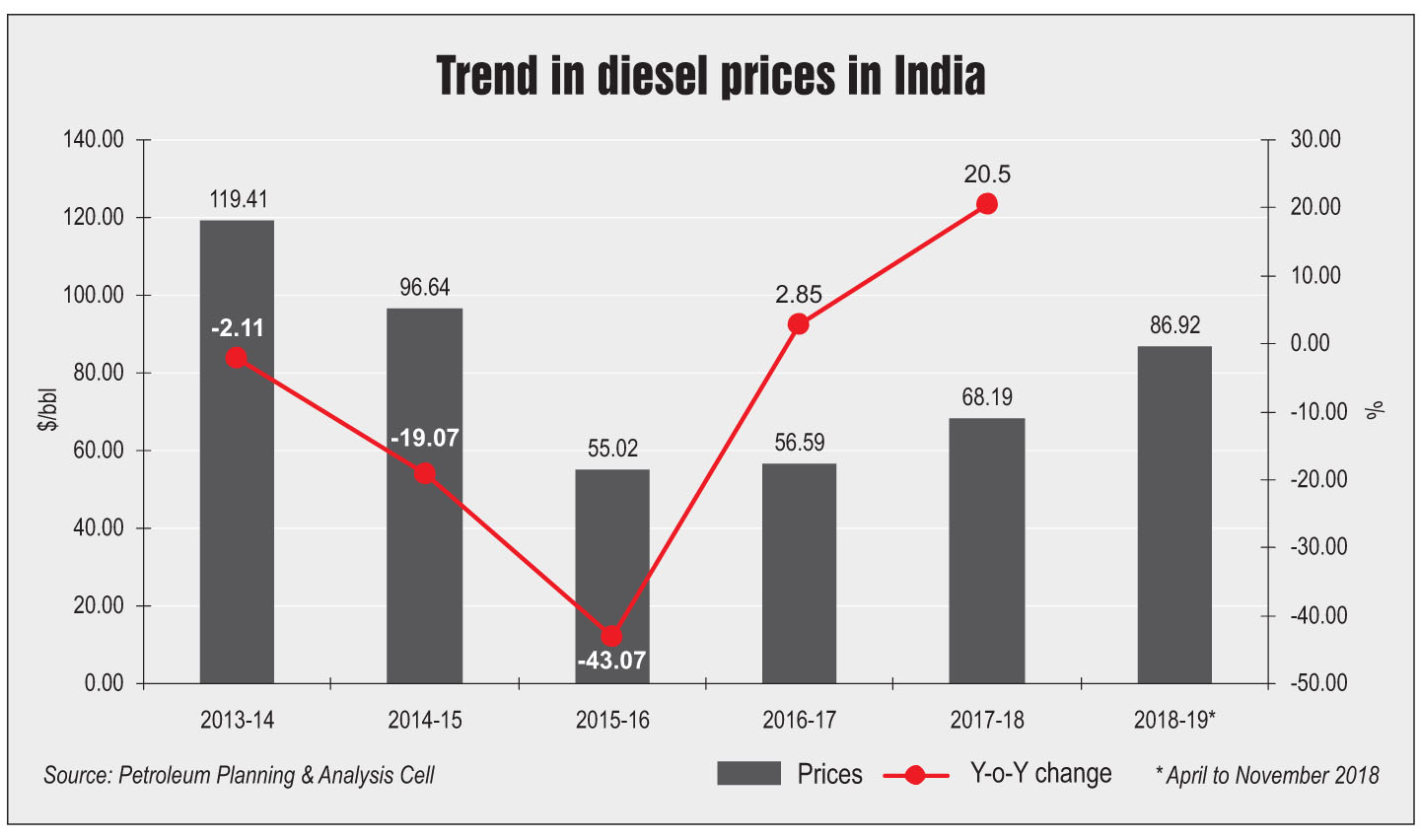 The cost of power generation through DG sets is quite high at over Rs 15 per unit. In some cases, it is even in the range of Rs 25-Rs 40 per unit. The high generation costs can be attributed to pilferage and high costs of fuel transportation. Meanwhile, wind and solar tariffs have fallen below Rs 3 per unit. The operations and maintenance (O&M) costs of DG sets are also generally higher. However, the O&M requirement and cost depend on the quality of fuel used and the hours of operation of the DG set. 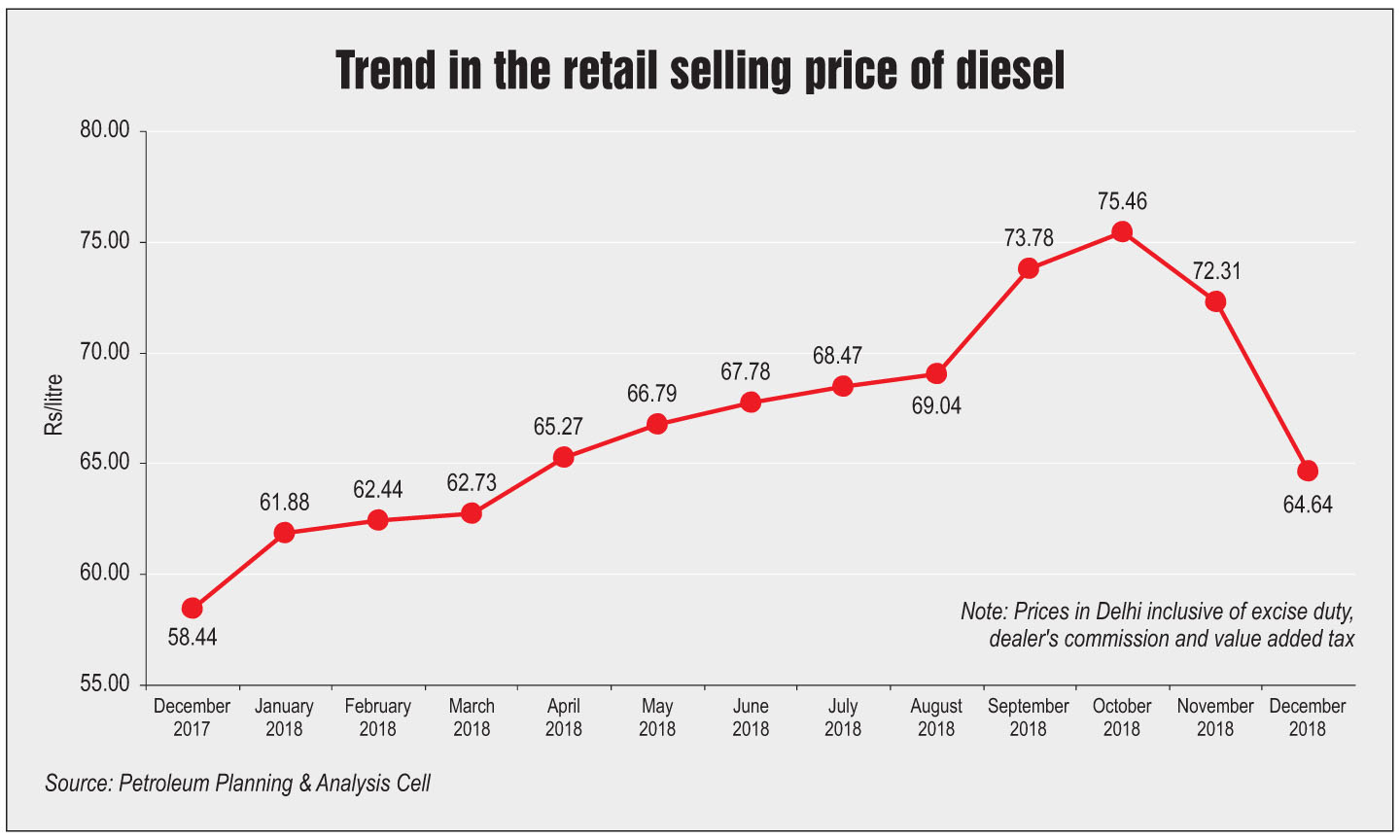 The low initial cost was one of the key factors driving the adoption of DG sets. However, the difference in the costs of DG sets, and solar and wind power systems has reduced significantly over the past few years. In addition, the increasing focus of statutory authorities on pollution control is expected to drive up the capital costs of DG sets. The price of diesel has also increased consistently over the past three years. Thus, with the falling solar and wind power prices and rising diesel fuel prices, DG sets have become less cost competitive while wind and solar rooftop systems have emerged as financially viable options for providing power backup.

However, solar and wind, without storage, are intermittent sources of power. When storage systems are incorporated, the costs go up. Hence, the demand for DG sets is expected to continue for industries where continuous power supply is of critical importance. Photovoltaic-DG hybrid systems have also gained traction as they address the issue of variability of solar power generation. The use of solar PV-DG hybrids lowers the fuel consumption as PV modules support the base electricity load and diesel provides backup in case of an unexpected outage.