Diesel generator (DG) sets continue to play an important role in meeting the backup requirements of consumers across the domestic, institutional, commercial and industrial segments. Despite high running costs, DG sets are popular across these segments owing to the ease of availability of fuel, low capital cost, shorter installation period and high efficiency. While the power deficit has declined today, increasing urbanisation, automation and infrastructure development are driving the growth in this industry.

The DG set market in India is broadly classified into four segments on the basis of kVA rating: low (5-75 kVA), medium (75.1-350 kVA), high (350.1-750 kVA) and very high (750.1–3,000 kVA). Low-rating DG sets constitute a major share of the market and are used in the telecom sector for backup power in grid-connected areas and as baseload power in off-grid areas. The telecom sector accounts for 55-60 per cent of sales in the segment. Other user segments include small-scale industries, petrol pumps and small commercial establishments.

The DG set market comprises both organised and unorganised players with the former accounting for a major share of 79 per cent. Unorganised small-scale players typically manufacture low rating DG sets of up to 25 kVA, owing to their use of simple technology. The organised segment includes large multinational players as well as homegrown conglomerates such as Ashok Leyland, Caterpillar, Cummins, Eicher, Greaves Cotton, Mahindra & Mahindra, Kirloskar Oil Engines Limited, and Perkins.

Besides the power demand-supply gap, the demand for DG sets is influenced by the growth in the industrial, infrastructure and real estate sectors. During 2017-18, the implementation of the goods and services tax led to disruptions in the industrial and infrastructure sectors, leading to a slowdown in DG sets’ order inflow. In addition, the implementation of the Real Estate (Regulation and Development) Act, 2016 affected orders from the real estate sector. The demand from the telecom tower segment also continued to remain weak.

The demand for DG sets is estimated to have recovered somewhat in 2018-19, with the production projected at 120,500 units or a 7.7 per cent increase over in the previous year.

As per the Central Electricity Authority, the installed diesel-based generation capacity in the country stood at 638 MW as of December 2018. It accounts for a minuscule share of 0.18 per cent in the country’s total installed capacity of nearly 350 GW (across all fuel sources). Over one-third or 212 MW of diesel-based capacity is concentrated in Tamil Nadu, 25 per cent (160 MW) in Kerala, 24 per cent (153 MW) in Karnataka, and the rest in the Andaman & Nicobar Islands (40 MW), Andhra Pradesh (37 MW) and Manipur (36 MW). DG sets are an important power source in remote areas as well as in islands such as Andaman & Nicobar where grid connectivity is lacking.

With growing digitalisation, the DG set and engine industry is also not far behind. Indian manufacturers have started rolling out smart DG sets with advanced features like real-time monitoring, remote management, automatic alarms in case of any deviations, predictive maintenance, and fuel theft/leakage alerts. These new-age gensets are aimed at enhancing consumer satisfaction. Consumers can turn DG sets on or off from anywhere, with remote control capability, or automatically schedule switch on and off timings. Also, key operational parameters such as fuel level, fuel consumption, coolant level, engine temperature, abnormal noise level, power generated, capacity utilisation, and running hours can be monitored remotely.

Gas-based gensets are also finding demand among consumers in states like Delhi, Gujarat and Maharashtra, where compressed natural gas is easily available. These gensets are more compact than DG sets, have lower operating costs and noise levels, and are environment friendly.

Further, solar-diesel hybrid gensets and multifuel technologies are key emerging options to improve reliability and efficiency, and achieve cost savings. Hybrid DG sets combine at least two different sources of energy and may or may not have a storage facility. 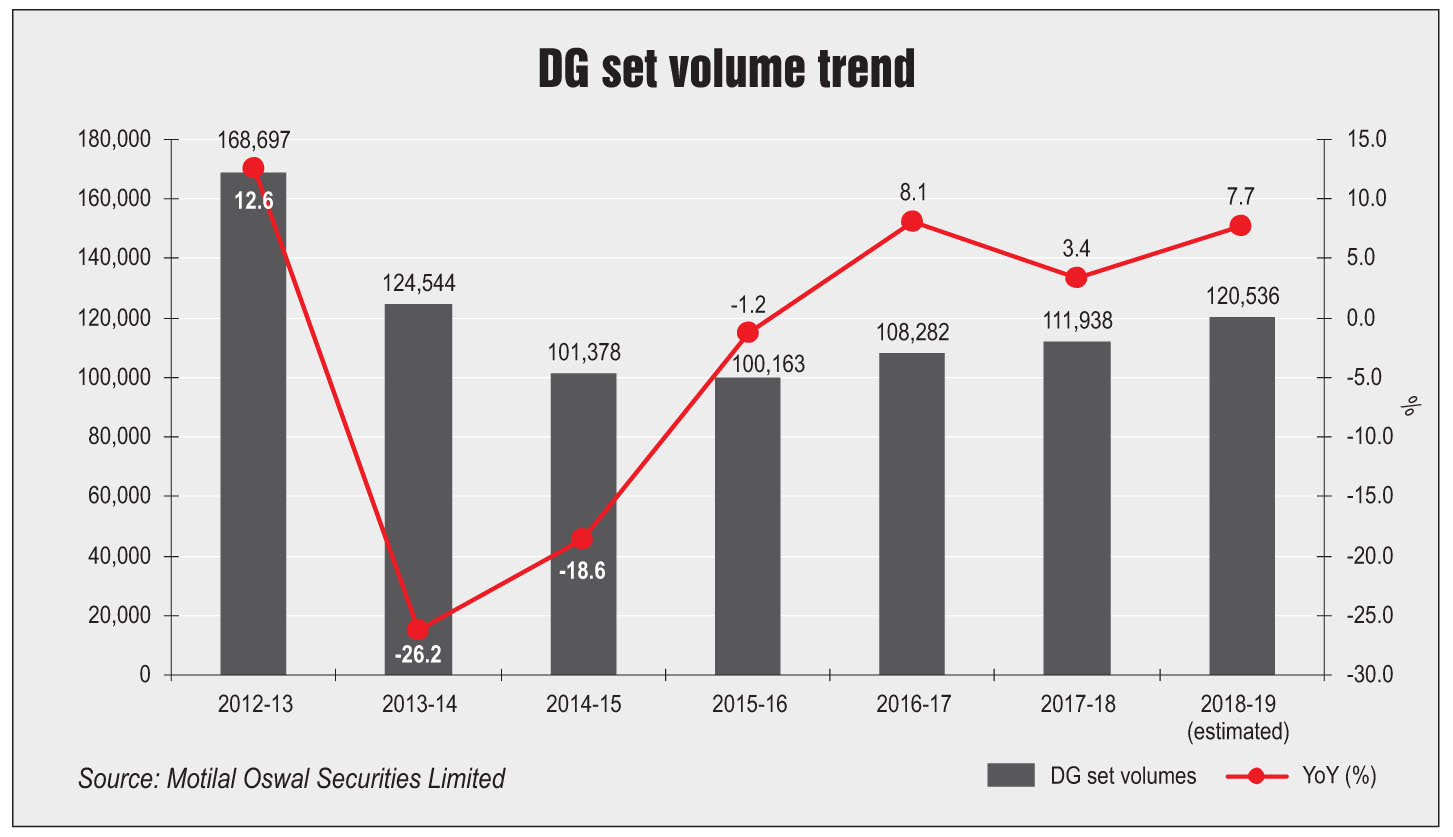 The cost of fuel (diesel) accounts for 85-90 per cent of the total operating cost of a DG set while the rest is accounted for by the capital cost (6 per cent) and spares (4 per cent). The cost of diesel has been witnessing an increasing trend – from Rs 53-Rs 54 per litre in June 2017 to Rs 62-Rs 64.70 per litre in January 2019 (retail selling price in Delhi as per the Petroleum Planning and Analysis Cell). Due to the high fuel cost, the cost of generating power from DG sets – at Rs 15-Rs 17 per kWh – is the highest among all fuel sources. In comparison, the cost of power generation from coal-based plants is broadly about Rs 3-Rs 4 per kWh and from gas-based plants about Rs 4-Rs 7 per kWh. Further, the power generation cost from renewable energy sources has declined significantly in recent months, with solar power witnessing the lowest bid of Rs 2.44 per kWh and wind power recording the lowest bid of Rs 2.45 per kWh. However, since DG sets are primarily used for backup power and not for baseload power, consumers continue to rely on them.

The growth of the DG set and engine industry is linked to power deficit as well as industrial and economic growth. The all-India average duration of power cuts has reduced from 20 hours a month (May 2016) to five hours a month (December 2018), as per the Urban Jyoti Abhiyan (URJA) portal. This shows a significant improvement in the power supply scenario and residential consumers’ dependence on DG sets has come down. However, large commercial and industrial consumers are expected to continue to rely on DG sets as even minor disruptions in power supply can result in production and revenue loss .

Industrial and infrastructure capex growth also signals a greater demand for DG sets. Economic growth is in a revival phase with the GDP growth rate for 2018-19 estimated at 7.2 per cent vis-à-vis 6.7 per cent for 2017-18. The index of industrial production (IIP) figures for April-November 2018 were also 5 per cent higher than those for the corresponding period in the previous year. The government’s expansion plans for the roads, metro rail and railway segment also augur well for the DG set and engine industry. During road construction, DG sets are deployed in remote locations where power supply is an issue. Around 53,000 km of national highways have been identified to improve national corridor efficiency.

Further, Indian Railways is looking at installing or replacing DG sets to power air-conditioned cars for enhanced customer comfort, which is estimated to result in a market opportunity of Rs 2 billion-Rs 2.5 billion. The expansion of the metro rail network presents another key opportunity for DG sets, given that all metro stations will be equipped with DG sets for their power backup needs. And last but not least, an uptick in the telecom and real estate segments’ growth in suburban and rural areas would further drive the demand for DG sets.