System operators in India are preparing themselves to meet the challenges looming over the electricity sector. These pertain to the integration of 175 GW of renewable energy generation by 2022, the move towards decentralisation, increase in the number of grid participants, and the introduction of new ideas like energy storage, electric mobility and prosumers. To address the challenge of implementing availability-based tariff (ABT) and the deviation settlement mechanism (DSM) at the intra-state level, the technical committee under the Forum of Regulators (FOR) adopted the Scheduling, Accounting, Metering and Settlement of Transactions in Electricity (SAMAST) report in July 2016.

The report was prepared by a sub committee formed by the FoR technical committee, which is responsible for putting in place a regulatory framework for intra-state settlement and imbalance handling, among other things, to facilitate the large-scale integration of renewable energy while maintaining grid security and reliability. Overall, the technical committee’s mandate includes the deployment of a framework on forecasting, scheduling and deviation settlement of wind and solar generators; implementation of the ABT framework; introduction of ancillary services and reserves; and implementation of automatic generation control and primary control within states.

DSM implementation at the interstate level has evolved since the introduction of the ABT unscheduled interchange mechanism in 2000. The aim of SAMAST is to replicate its success at the intra-state level. Its implementation will help bring uniformity in the forecasting, scheduling, accounting and commercial settlement procedures at the intra-state level, which is imperative for the smooth integration of renewable energy into the grid, besides promoting competition and the electricity market at the intra-state level. SAMAST also aims to reduce the turnover time in pool account settlement by bringing in transparency, understandability, relevance, reliability and comparability in the energy statements as enumerated in the financial accounting standards. According to S.K. Soonee, adviser, Power System Operation Corporation of India (POSOCO), who headed the sub committee that prepared SAMAST, “For the effective implementation of SAMAST, we need champions in each of the state load despatch centres (SLDCs) who can pursue this and ensure introduction of competition, 15-minute scheduling and despatch, preparation of weekly accounts and their settlement to achieve overall economy in electricity transactions at the intra-state level.” Power Line presents an update on the status of SAMAST implementation across states…

The SAMAST report recommendations include the demarcation of the interface boundary and identification of intra-state entities and pool members; assessment of main, check and standby meters along with automated meter reading (AMR) logistics requirements; and deployment of adequate interface energy meters (IEMs) that have five-minute accuracy with AMR infrastructure. The latter must be done in coordination with the state transmission utility (STU). The energy accounting system and settlement procedures need to be well defined, simple, robust and dispute-free. State power committees must be formed for the preparation of energy accounts and state pool accounts must be created. Further, load forecasting and interchange scheduling for all intra-state entities must be undertaken by SLDCs. The governance structures must be well defined. The SLDCs must be adequately empowered with human resources, IT hardware and software infrastructure and communication systems. SLDCs could request funding from the Power System Development Fund (PSDF) for the roll-out of SAMAST under the direction of the state electricity regulatory commissions (SERCs). 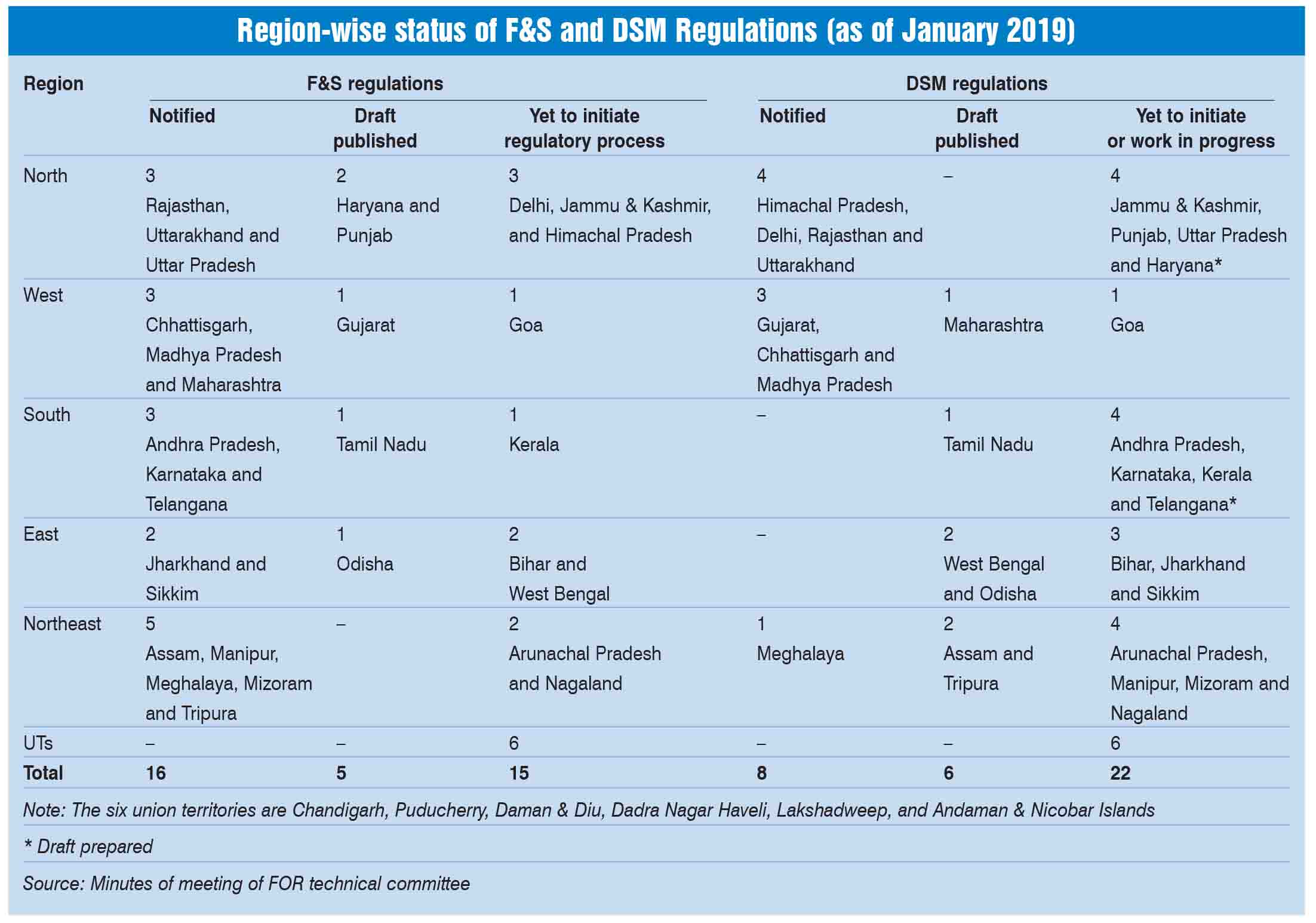 Some progress has taken place on the ground over the past three years. Many of the SLDCs, SERCs and other state entities are working on SAMAST implementation. Idam Infrastructure is the designated consultant assisting the states in the implementation process. In July 2017, the United States Agency for International Development (USAID), along with the GTG-RISE team, which is pursuing the Greening the Grid (GTG) project and the Renewable Integration and Sustainable Energy (RISE) initiative in India, was appointed for providing support on framing regulations pertaining to grid integration of renewables under the USAID’s GTG-RISE Initiative. The GTG-RISE team is assisting SLDCs in Punjab, Himachal Pradesh, Haryana and the north-eastern states in the preparation of detailed project reports (DPRs) for SAMAST to obtain financial assistance from the PSDF.

As of January 2019, 14 states have submitted the DPRs for SAMAST implementation to the PSDF monitoring committee for approval. Of these, four DPRs (from Rajasthan, Andhra Pradesh, West Bengal and Tamil Nadu) have been approved. In some cases, the states are in the process of addressing the feedback and comments from the techno-economic sub-group (TESG) under the PSDF, which is scrutinising the DPRs. Eighteen other states are either in the process of DPR preparation or yet to start. The states that are yet to commence DPR preparation include the large ones like Uttar Pradesh, Uttarakhand, Jharkhand and Odisha. In the latest technical committee meeting, held at New Delhi in January 2019, it was suggested that POSOCO could expedite the DPR approval process through the PSDF monitoring committee. 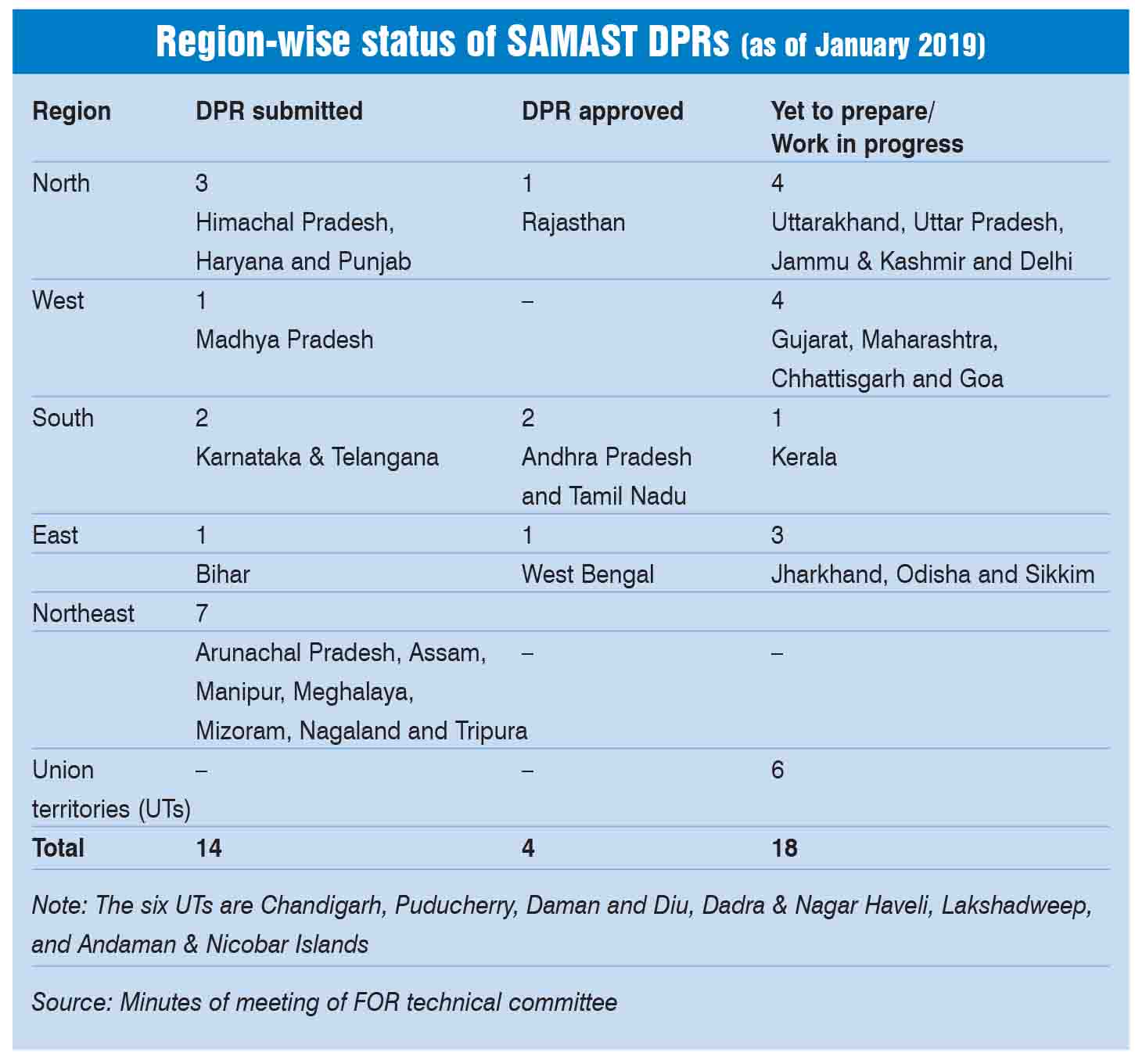 Some SLDCs have made significant progress in SAMAST implementation, involving the placement of orders for procuring software and meters and their subsequent deployment, which account for a major part of the DPR amount. The Rajasthan SLDC had completed 84 per cent of the work as of January 2019. Its DPR was approved by the PSDF committee in May 2017. Eight other states/UTs that have initiated SAMAST implementation are Chhattisgarh, Delhi, Gujarat, Kerala, Madhya Pradesh, Maharashtra, Odisha and Tamil Nadu. Of these, only Madhya Pradesh and Tamil Nadu approached the PSDF for financial assistance while six others have started implementation but are yet to prepare DPRs. Further, at least in four states – Madhya Pradesh, Gujarat, Delhi and Maharashtra – state pool accounts are already in place, which can be strengthened for SAMAST implementation. In states/UTs including Jammu & Kashmir, Uttar Pradesh, Uttarakhand, Chandigarh, Daman & Diu, and Dadra & Nagar Haveli, progress has been slow. They have completed only the first step of identification of intra-state entities and interface points. Meanwhile, in the case of Jharkhand, Sikkim and Puducherry, no information is available on SAMAST implementation.

On the regulatory front, it is important for SERCs to notify regulations pertaining to forecasting and scheduling (F&S) and DSM, which will help the SLDCs administer the process once SAMAST has been implemented. The FoR has approved the model regulations for both F&S and DSM to ensure uniformity and harmonisation among individual states. In this respect, 16 states have notified the final F&S regulations while five others have come up with draft regulations. Meanwhile, the progress on DSM rules is slower. Only eight states have notified the final regulations while six others have published the draft versions. 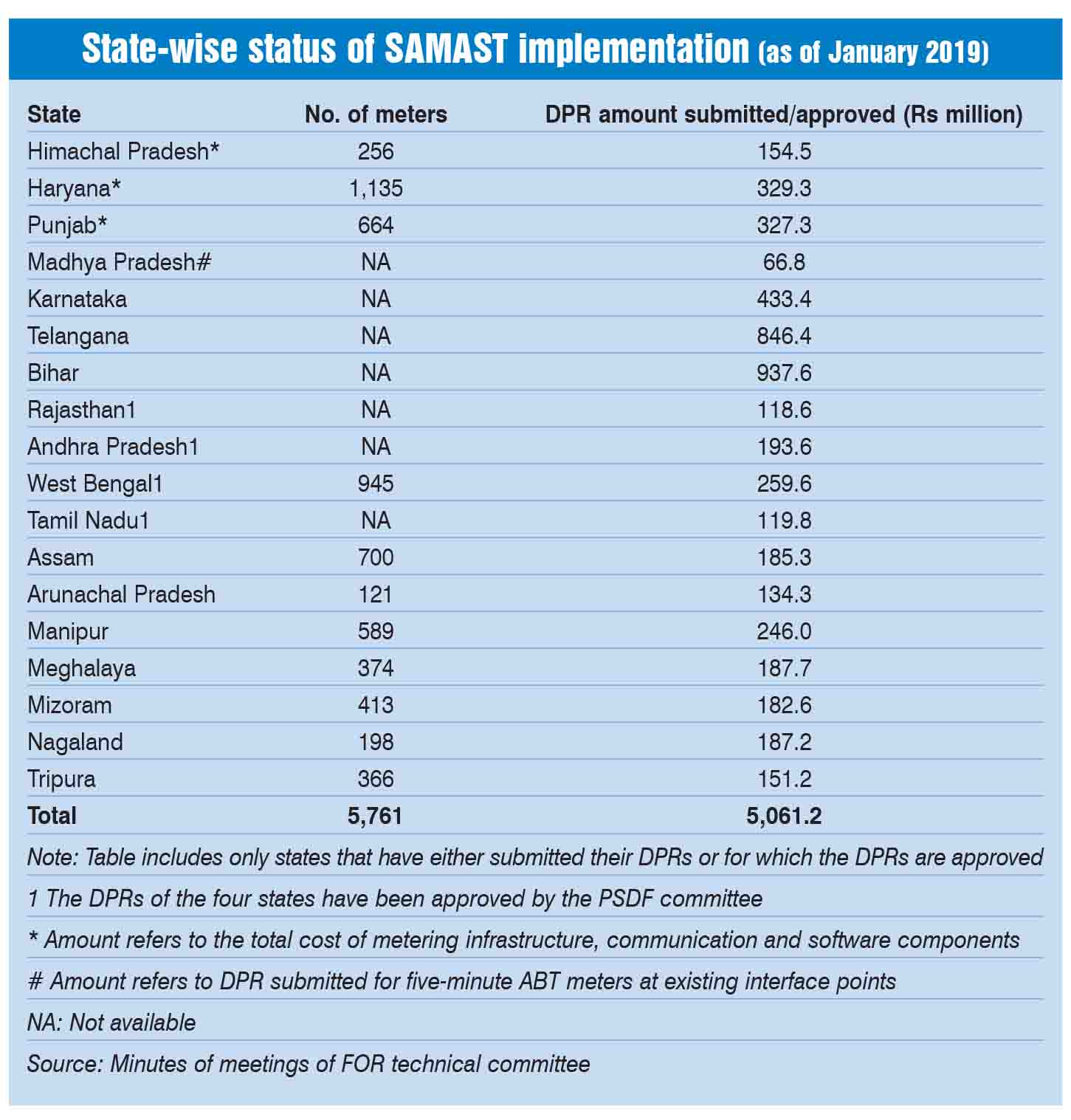 In its forthcoming meeting, the technical committee is expected to discuss the implementation of SAMAST in states that have not yet initiated any action. Further, it is likely to revisit the model DSM regulations to make appropriate amendments in line with the Fourth Amendment to the Central Electricity Regulatory Commission’s DSM regulations. This amendment pertains to linking of DSM rates to the daily average clearing price in the day-ahead market at the power exchange to ensure better demand estimation and accurate scheduling by discoms. Other changes include tightening of the frequency band (49.85-50.05 Hz) and revision of the DSM price vector and slope. Further, the operational difficulties in the implementation of DSM regulations at the state level will have to be addressed.

It has to be acknowledged that the electricity sector in various states is at different levels of development with different governance structures. It is a Herculean task and a time-consuming process to get everyone on the same level. The sooner it is realised that states are losing money by not being able to procure cheaper electricity due to lack of proper institutions and systems in place, the better it is for them. A lot of action is needed in Indian power system operations. The implementation of SAMAST and subsequently F&S and DSM regulations will help in strengthening intra-state power system operations. The implementation of the recent FoR-approved Capacity Building of Indian Load Destpatchers report, which proposes a complete revamp of load despatch centres in the country including their infrastructure, human resources and accounting practices, will help equip the SLDCs with adequate tools and systems to administer portfolio balancing at the intra-state level. SAMAST is a precursor to ensuring economical despatch of electricity and establishment of power markets at the intra-state level.