CLP Holdings Limited, a company listed on the Hong Kong stock exchange, entered the Indian power sector in 2002 as CLP India Private Limited. It later diversified into renewables to mitigate the fuel supply issues plaguing the conventional power segment. The company has since grown to become one of the largest renewable energy producers as well as one of the largest foreign investors in the sector with a project portfolio of over 3,000 MW across the coal, gas and renewable segments.

The year 2018 was a significant one for CLP India as  Caisse de dépôt et placement du Québec (CDPQ), one of Canada’s largest pension fund managers, acquired a 40 per cent stake in the company. It commissioned its first solar project, the 100 MW Veltoor project in Telangana, and acquired two others during the year.

The CLP Group entered the Indian market by acquiring a stake in the 655 MW Paguthan combined cycle power plant (CCPP) in Bharuch, Gujarat, in 2002. The project was originally promoted by the Gujarat Paguthan Energy Corporation, a joint venture with the Torrent Group, UK-based Powergen, Siemens AG and the Gujarat government. It generated 293.98 MUs of electricity and operated at a low plant load factor (PLF) of 5.60 per cent in April 2018 to February 2019 as per the Central Electricity Authority (CEA). The power purchase agreement (PPA) for the project with Gujarat Urja Vikas Nigam Limited (GUVNL) expired recently.

The 1,320 MW Mahatma Gandhi Thermal Power Station, a supercritical coal-based power plant in Jhajjar, Haryana, accounts for about 43 per cent of the company’s installed capacity. The project, commissioned in July 2012, is one of India’s first supercritical plants. It was built with an investment of $1.2 billion. Power from the project is sold to Uttar Haryana Bijli Vitran Nigam Limited, Dakshin Haryana Bijli Vitran Nigam Limited and Tata Power Delhi Distribution Limited. The project’s coal requirement for full load operations is 6.76 million tonnes. The company has a coal linkage with Central Coalfields Limited, which supplies coal from the North Karanpura coalfield in Jharkhand.

Between April 2018 and February 2019, the project generated 6,297.86 MUs, about 3.6 per cent lower than the generation in the corresponding period in the previous year, as per the CEA. The PLF stood at 59.52 per cent vis-à-vis 61.77 per cent during the same period. The project performed well despite a planned outage on account of replacement of fabric filters and flue gas desulphurisation units to meet the new environmental regulations. The emission from the plant reduced in 2018 and its water consumption stood at 2.43 cubic metres per MWh as against the specified limit of 3.5 cubic metres per MWh.

In September 2018, the CLP Group introduced CDPQ as a strategic 40 per cent shareholder of CLP India. CLP GPEC (Mauritius) Holdings Limited, a wholly  owned subsidiary of CLP, maintains a majority 60 per cent shareholding in CLP India while the remaining 40 per cent has been sold to CDPQ for Rs 26.4 billion. In an official press release, Richard Lancaster, chief executive officer, CLP Holdings, said, “We are pleased to have a partner that shares both our vision for growth and commitment to tackling climate change. India has been, and will continue to be, a primary growth market for CLP. With the expertise and resources this new partnership brings, CLP India will be even better placed to capitalise on opportunities to grow the business through low-carbon investment.”

The coal shortage and coal quality issues have affected electricity generation from CLP’s Jhajjar plant. In 2018, the coal shortage varied from 10 per cent to 32 per cent, with peak shortages recorded during May-July 2018 (as per the CEA’s monthly coal statements). The lower supply of coal can be attributed to logistical challenges such as limited rake availability for coal transportation during the high-demand season. As a result, commercial availability did not reach the 80 per cent target to allow the plant to fully recover all capacity charges.

The tightening of domestic environmental regulations is also a cause for concern although the company is among the most environmentally responsible thermal power producers in the country. In January 2019, it received a notice to pay a penalty of Rs 50 million to the Haryana State Pollution Control Board following the National Green Tribunal’s (NGT) order on fly ash disposal by thermal power plants. The company maintains that the project is compliant with the fly ash utilistion/disposal requirements and has sought guidance from the Central Pollution Control Board on the interpretation of the NGT order. A petition was filed before the Supreme Court, pursuant to which the court stayed the NGT order and directed developers to approach the NGT.

The lack of domestic natural gas for the Paguthan CCPP is another challenge for the company. The project has a gas allocation of 1.43 million metric standard cubic metres per day (mmscmd), of which 1.36 mmscmd is from the KG-D6 basin while the remaining is from non-APM (administrative price mechanism) gas. During 2018, gas supply to the project ranged from 0.10 mmscmd to 0.30 mmscmd, significantly lower than the requirement. Further, the company’s PPA with GUVNL expired in December 2018 and it might be difficult to find new buyers until gas supply improves.

CLP India plans to expand its renewable energy portfolio in line with the group’s focus on low-carbon businesses. The firm will leverage both greenfield and brownfield opportunities in the renewable space, that is, it will participate in central government auctions as well as acquire existing wind and solar projects. It has been evaluating solar resources at various locations to determine more reliable and site-specific resource potential. The company is also looking to invest in non-generation businesses such as transmission, distribution and other customer-focused segments. In the past, CLP India has indicated a long-term goal of listing on the domestic bourses.

Going forward, India will continue to be a major growth market for the CLP Group as the government’s renewable energy targets align well with the company’s philosophy. 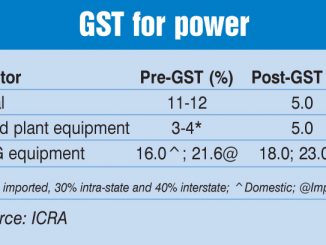 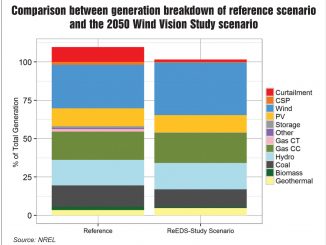 April 2, 2017
Wind power is one of the fastest growing sources of power generation in the US and is [...]
More